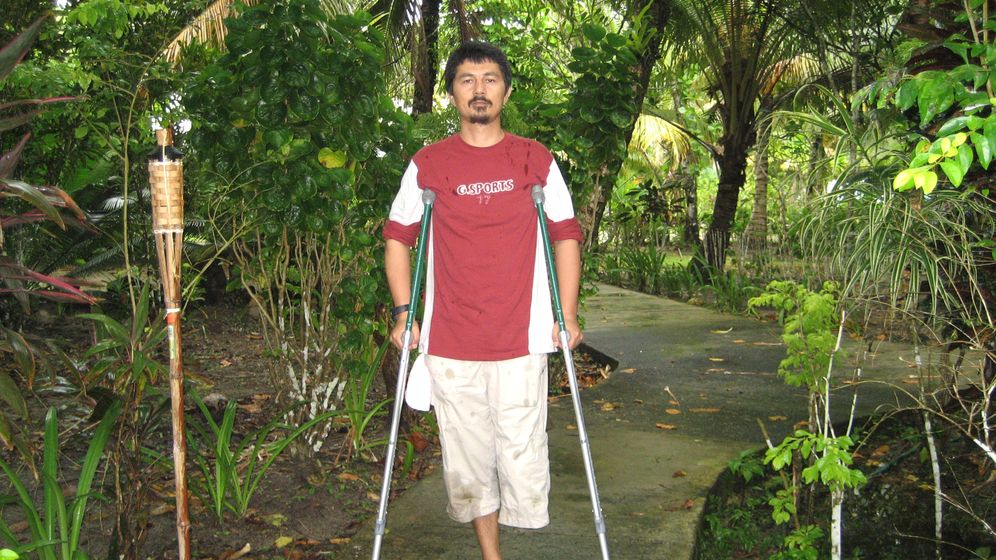 On her sixth birthday, Muslima had one wish: to see her dada. On that day, Ahmad Tourson, her father, was trying to sleep. But slumber was a luxury in the windowless metal box to which he was consigned for 22 hours a day, sometimes 24. On Muslima's sixth birthday, Ahmad was imprisoned in Guantánamo Bay, Cuba. He had been there for her last five birthdays as well.

But in June 2008, after Muslima turned six, sunlight shone on the steel vault to which Ahmad was confined. Over six years of courtroom battles and cruel conditions of confinement later, the hundreds of men the US executive claimed the power to hold indefinitely won the right to petition for a writ of habeas corpus to challenge the lawfulness of their detention. Ahmad's case was to be heard by a US federal judge.

In consequence, the US government withdrew any pretense that Ahmad was an "enemy combatant," admitting it had no basis to hold the man and his 16 Uighur countrymen, all from China. With the case thus abandoned, remedy was the sole question remaining. The Uighurs sought their only possible remedy: freedom in the United States.

On the day of the hearing, US District Judge Ricardo Urbina decried assertions by then-President George W. Bush's top lawyers that executive discretion was almighty. He invited the president's lawyers -- several times -- to explain what the security risk would be to the nation should the Uighurs be freed in the US. "You've had seven years to study this issue," the judge admonished. The US government could not produce one single example.

Judge Urbina concluded that the detention of the Uighurs was illegal. Understanding that the men could not be returned to their native China, which would likely have tortured, or even executed, the members of the minority ethnic group, and that diplomatic efforts to lobby (and re-lobby) nearly 100 countries for their humanitarian resettlement had failed, Judge Urbina ordered the 17 men freed to the United States. Release was mandated within 72 hours.

The prospect of freedom, once outside his reach, was now within Ahmad's grasp. The Uighurs, whose young faces had developed wrinkles from years of indefinite detention, imagined boarding a plane to freedom. A contingent of US marshals flew to Guantánamo to escort the men to their new home. Ahmad was at liberty's doorstep.

But 42 hours before Ahmad's scheduled release, the US government won an emergency stay to shelve the Uighurs' release until the case could be reviewed by a higher court. On appeal, the D.C. Circuit Court of Appeals ruled that US federal courts exercising habeas jurisdiction were impotent to release men at Guantánamo whose confinement was admittedly unlawful. The Great Writ was defiled. Liberty, said the D.C. Circuit, had no guardian.

Ahmad embarked on his eighth year of indefinite detention because US judges concluded they did not have the power to end it. And two presidents agreed. In Guantánamo's Orwellian land of doublespeak, Ahmad was not detained, said Bush; the U.S. military was "harboring" him (inside a chain-link fence surrounded by barbed wire) because he "chose" not to return to China (a country whose government would have put a bullet in his head), and the president would honor this choice out of executive grace (as the US claimed it had no legal obligation not to refoule him to a country that tortures), until a safe nation granted him refuge (so long as that nation's president did not reside on Pennsylvania Avenue). And, once he entered office, President Barack Obama spun the same tale.

Not a Durable Refuge

In the summer of 2009, the US State Department negotiated Ahmad's resettlement with the Republic of Palau, an isolated, impoverished island in the middle of the South Pacific. After multiple years of shopping Ahmad to foreign sovereigns, the US found a remote island, the only nation, it said, to offer him refuge. (Any nation that previously considered granting Ahmad asylum quickly reneged when Chinese diplomats threatened cessation of economic ties. Palau, however, is one of a small contingent of countries that maintains diplomatic relations with Taiwan.)

The US and Palauan governments acknowledged that the remote island was not durable as a long-term refuge. Ahmad's relocation there, they said, was intended as a way station, a means to leave Guantánamo, a temporary solution until another country offered him sustainable resettlement. Ahmad thus accepted his only opportunity to leave Guantánamo, with the hope, one day, of finding a permanent refuge.

That hope has shriveled. Today, two years since his release and 10 years since he was sold into US custody, Ahmad remains in limbo in Palau. Despite his and the US State Department's assiduous efforts, he has no reasonable prospect of future resettlement. And the remote island is far from paradise.

Ahmad holds a diploma from a technical college in China. He has experience as a management technician at an oil refinery and as a restaurant owner. He has advanced English language skills. But, in Palau, Ahmad cannot find work that provides a living wage. He is excluded, under Palauan law, from access to the same job opportunities available to Palauan citizens. What is more, he is not covered by Palau's minimum wage law, which is, itself, a trifling $2.50 an hour. Ahmad has no path to citizenship; under Palau's constitution, citizenship is conferred only to individuals with native Palauan ancestry. Even if Ahmad could access gainful employment, Palauan employers have refused to hire him. Many raise concerns about losing customers; others call the men terrorists. With a population of just 20,000, the entire island knows the Uighurs. The men cannot blend in; they suffer a unique prominence they would not face in most nations.

The scale tips further. Ahmad is a transtibial amputee. Before he was sent to Guantanamo, Ahmad had been living as a refugee in Kabul. Like many Uighurs, he had suffered persecution under China's control. Ahmad was lashed with electric sticks and his wife was threatened with a forced abortion by Chinese authorities. With modest resources, Ahmad sought asylum in neighboring countries, but most Central Asian nations had deals to deport Uighur refugees to China.

But Afghanistan did not forcibly repatriate Uighurs to China. The nation was (at that time) a safe and accessible shelter for Uighurs. Thus, in 2000, Ahmad took refuge in Kabul. Over a year later, the US and NATO began combat operations in Afghanistan. US cargo planes dropped leaflets from the skies offering significant rewards to locals for catching "enemies." Ahmad, who was searching for safety for his two-year-old son and pregnant wife, was traded to US forces for $5,000. He was taken to an Afghan prison where his left leg was shattered in a bombing. Once in Guantánamo, his leg was amputated below the knee. In the prison, Ahmad, a young man in his early 30s, was consigned to a walker.

Amputees require lifetime prosthetic care, routinely available in many nations. But no level of prosthetic care exists in Palau. Indeed health care is so limited that Palauan nationals must travel overseas to obtain specialized or emergency care. But Ahmad is unable to travel outside Palau -- even for medical care. He has no reasonable means of procuring travel documents or permission to enter another nation. According to orthopedists, without access to this essential prosthetic care, Ahmad will not achieve full mobility. Life on the island is, and will remain, untenable.

According to the United Nations High Commissioner for Refugees (UNHCR) Handbook, resettlement as a durable solution must be accompanied by a meaningful prospect of local integration, which involves more than safety from refoulement. Local integration includes the enjoyment of legal, economic, medical, and social rights, none of which are available to Ahmad in Palau. Indeed, the limitations of the conditions in Palau are precisely the reason the island was not proposed as a durable solution and why relocation there was intended to be temporary only.

Ahmad wants to forget the years he spent without charge at Guantánamo, but he can't. The sheer isolation of Palau, which has no Uighur or refugee population of any kind, reminds him hauntingly of Guantánamo. And one memory he can never forget is that of the 171 men who remain at Guantánamo, including five of his countrymen.

Ahmad's only ray of dawn during this dark decade came in 2010, when he was reunited with his family. Muslima, who was born after Ahmad's capture, embraced her dada for the first time shortly before she turned nine. But the rosy-cheeked girl, whose radiant smile hardship has not obscured, is stateless. She has been mandated as a refugee by the UNHCR. But with no reasonable prospects of resettlement in another nation, she may remain stranded in Palau for the rest of her life. 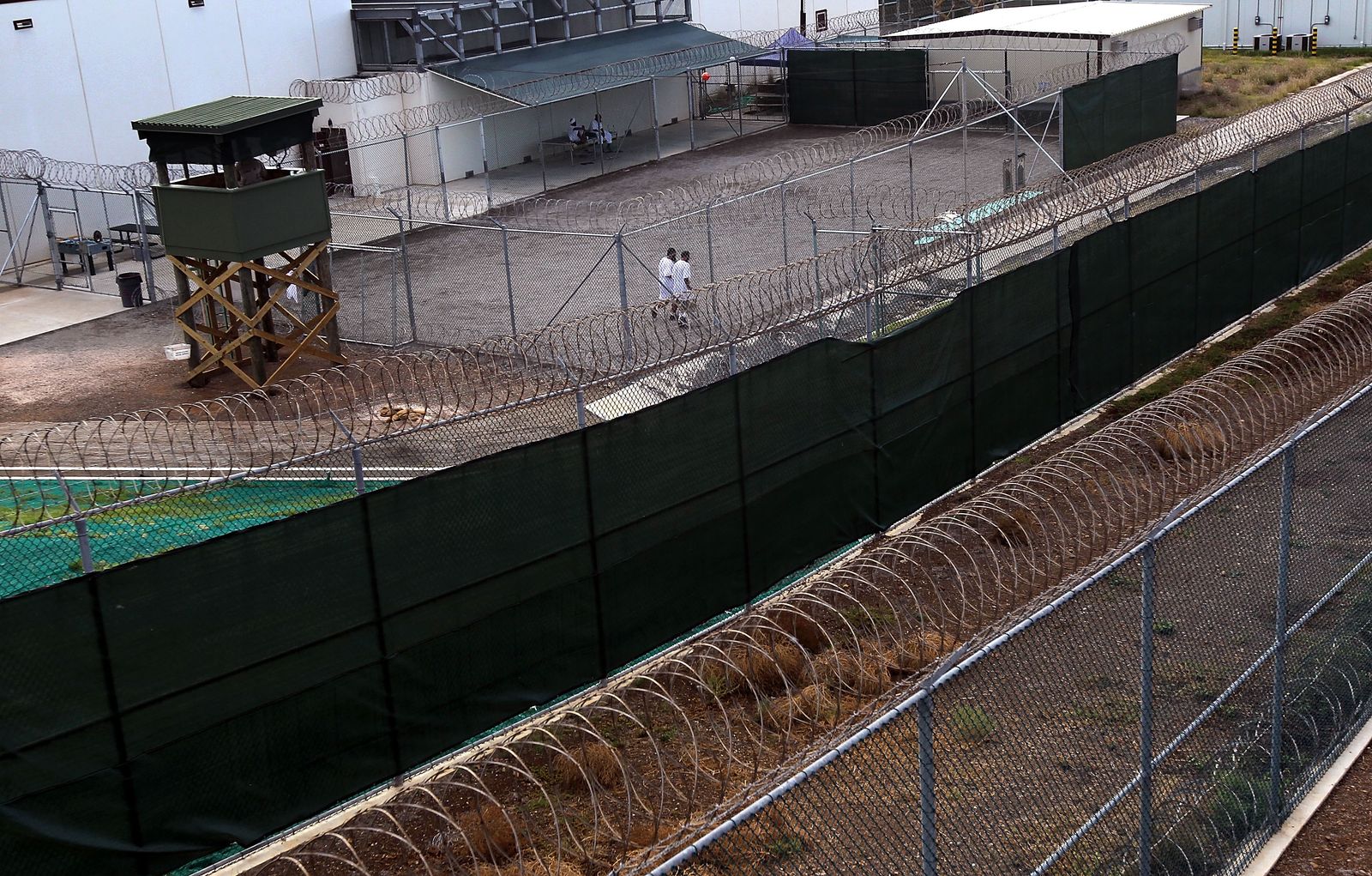 By designating them "unlawful enemy combatants," the US withheld them their rights due as prisoners of war under the Geneva Convention. The Bush government designated military tribunals to pass judgement over the prisoners held in Guantánamo. 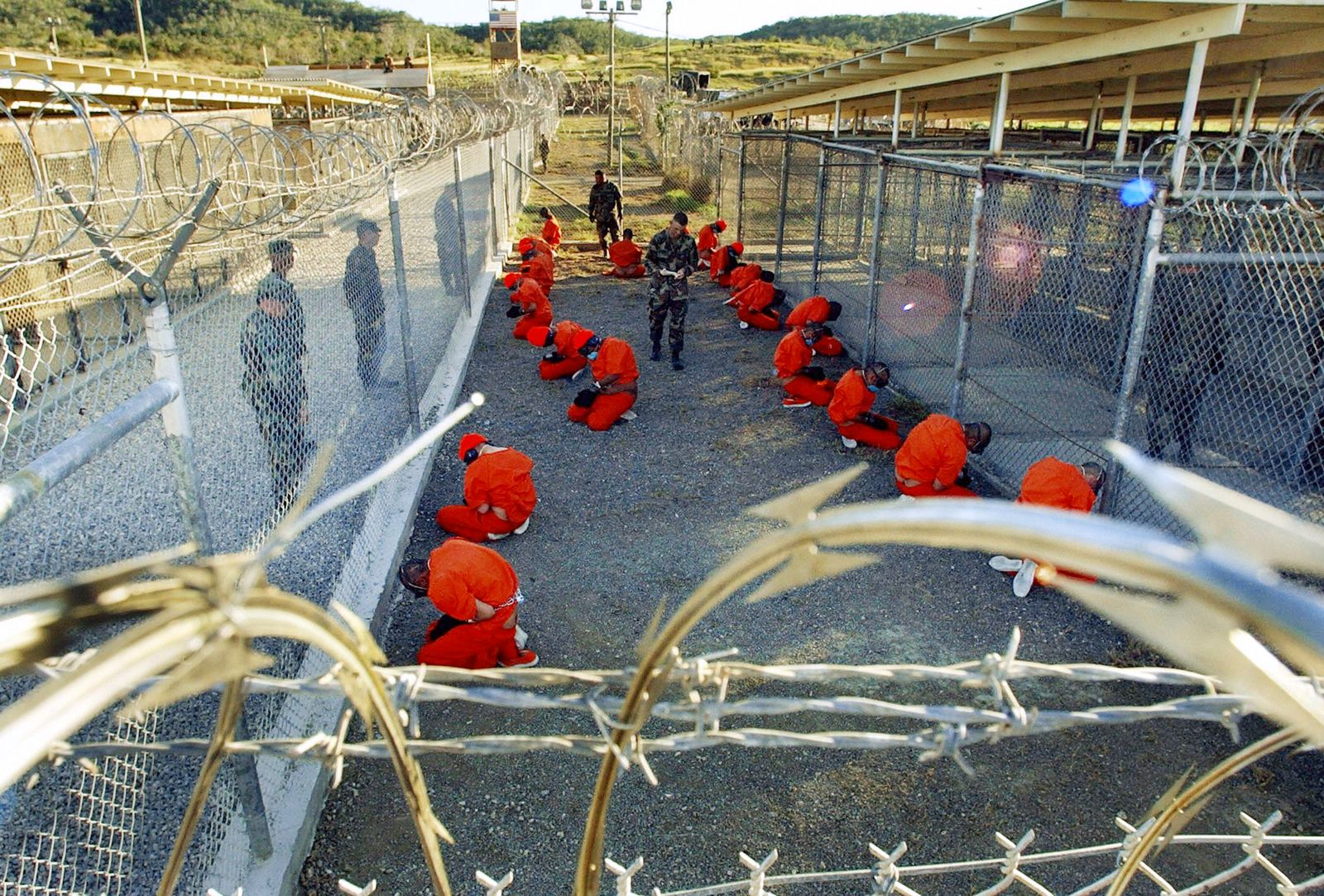 Some 770 alleged members of and sympathizers with the terror network al-Qaida from more than 40 countries have spent years inside the Guantánamo prison. Hundreds have since been released, most of them having been sent back to their home countries. 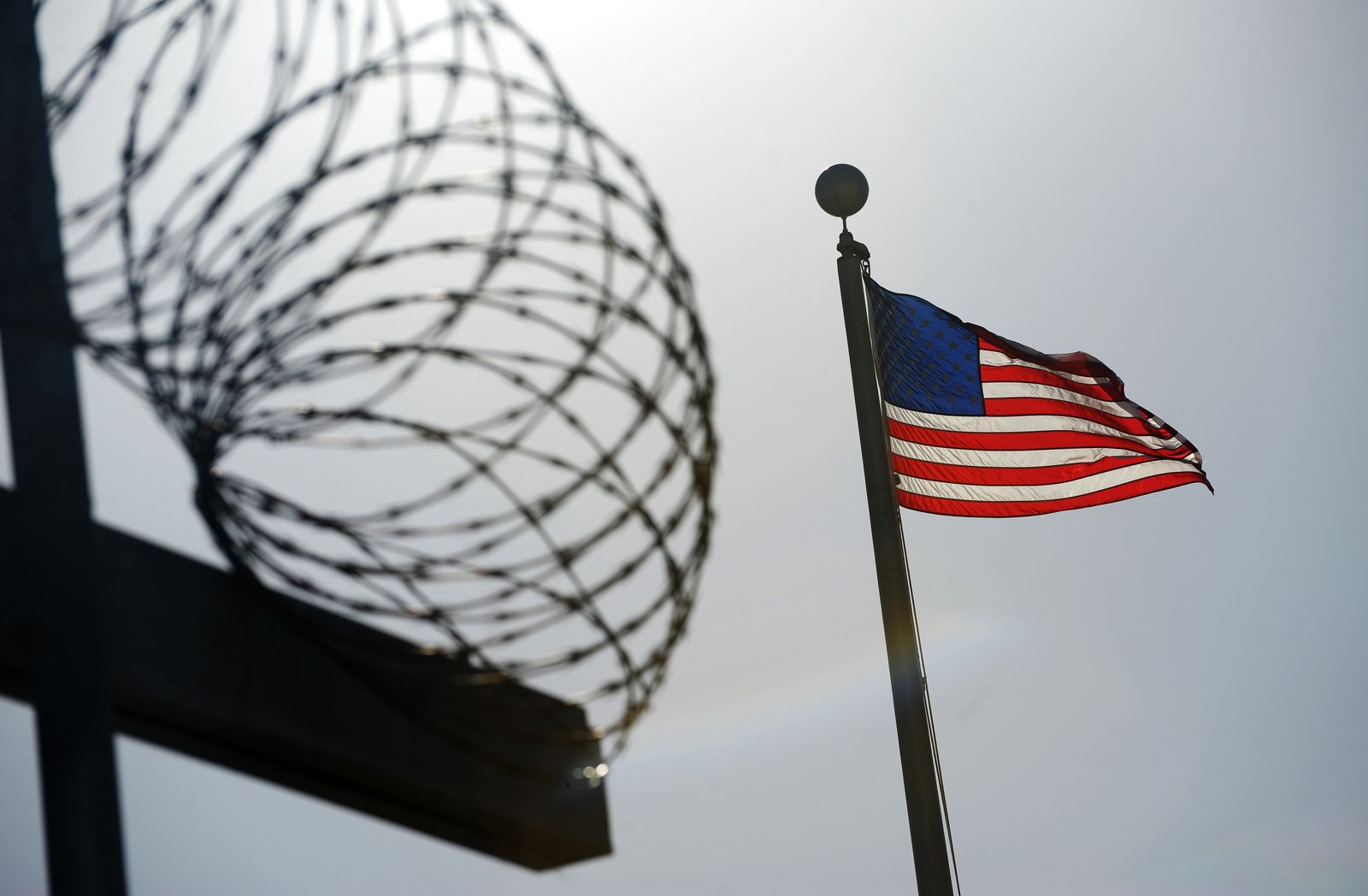 The US government has sought to find countries willing to offer new homes to many of the Guantánamo prisoners. But the search has proven difficult.