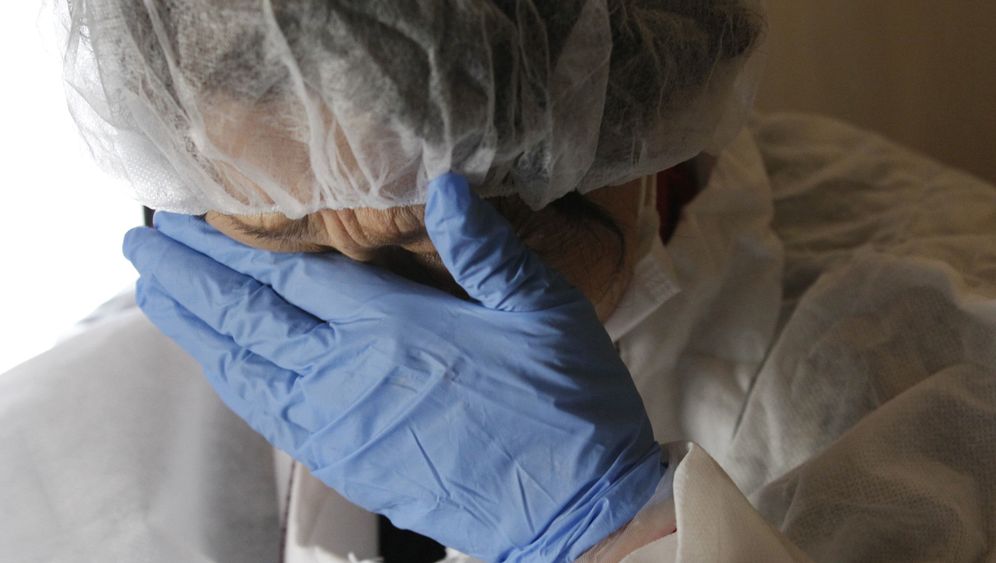 The borders of the restricted zone cut through the village of Katsurao. Many of the town's inhabitants had to leave their houses after the nuclear disaster in Fukushima. Neighbors only one street away were allowed to stay, but didn't want to. They were just too anxious about the invisible dangers of radiation and cancer.

Now the people of Katsurao live in provisional housing about an hour's drive away from their former homes. Tomoko Matsumoto knows their fears. The 36-year-old nurse works with a four-person team to care for the villagers. "Younger people are especially of concern," says Matsumoto. "And every mother! They worry that their kids will get thyroid cancer or leukemia."

Whether their fears are justified is still up for scientific debate. Even if the former residents of Katsurao get cancer in 10, 20 or 30 years, it will be nearly impossible to prove the causes. In addition to the Fukushima disaster a lot of other factors can come into play: genetic changes, smoking, alcohol consumption, unhealthy eating habits or viral infections.

Just how many cancer cases will the increased radiation trigger? Like most radiation experts, US radiologist Fred Mettler expects that Fukushima won't raise general cancer rates in Japan. If it did, the increase would be too small to measure, Mettler, a member of the United Nations Scientific Committee on the Effects of Atomic Radiation (UNSCEAR), recently told the news agency AP.

Meanwhile, Japanese authorities have begun the first long-term studies to analyze possible effects of the disaster. In total about 2 million residents from the Fukushima area will be observed over the next 30 years. Those affected by the catastrophe will receive detailed questionnaires along with full-body scans and thyroid exams. The cost of the study will be exorbitant, and the analysis of the mass data immense.

At beginning of February, 60 international radiation experts discussed initial results of the study in Vienna. The impact of radiation exposure affecting the population during the crisis and in the coming decades, will be at a low radiation category level, according to the head of UNSCEAR, Wolfgang Weiss, who is also from the German Federal Office for Radiation Protection.

While the radiation risks can be tough to quantify, for those affected by Fukushima, the fear is very real and seeps into their daily lives. Many people avoid eating local produce and don't drink tap water anymore. Edwin Lyman of the anti-nuclear Union of Concerned Scientists sees it like this: even if cancers do not turn up in population studies, that does not mean they are not there and that they do not play a role.

What still remains unclear, according to UNSCEAR head Weiss, is what happened in the weeks after the accident with the radioactive iodine 131. How was it spread in the environment? What impact could it possibly have on the thyroids of those affected?

What is known is what happened after the catastrophe at Chernobyl. There is a clear connection between the reactor accident in 1986 and the increase in thyroid cancer diagnoses. Thyroid cancer can be traced primarily back to the consumption of milk and leafy vegetables contaminated by iodine-131. Radiation expert Weiss suspects that a similar causal link won't be found in Fukushima. A mass screening of the thyroids of Japanese children after the accident showed very low levels of radiation, said Weiss. Besides, he notes, thyroid cancer appears more commonly in adults over the age of 40.

In total, about 360,000 children who were under the age of 18 when the catastrophe occurred need to be examined. They should be newly tested every two years until they turn 20 and then every five years after that.

In villages such as Katsurao people were most concerned about the children from the beginning. Nurse Tomoko Matsumoto explains that every child under the age of 15 was equipped with a dosimeter to measure total radiation exposure. So far, the devices haven't registered any alarming numbers, says Matsumoto. "I ask myself, whether some mothers' reactions are perhaps not overly-sensitive," she says.

Radiation experts such as Weiss and Mettler support their claims with studies from the Chernobyl catastrophe. In April 2011, UNSCEAR presented the results of the current edition of the report on Chernobyl. The report is based on an examination of more than 500,000 disaster relief workers on plant grounds during and after the accident. Their results were compared with checks on thyroid levels of about 100 million residents. A direct connection between the Chernobyl catastrophe and thyroid cancer rates of children and youth turned up in more than 6,000 cases. But there was no definitive proof that Chernobyl caused other types of cancers.

To counter critics such as International Physicians for the Prevention of Nuclear War (IPPNW) and Greenpeace, who doubt the UNSCEAR data, the broadest examination possible of the nuclear catastrophe in Japan must be carried out. Four UNSCEAR groups should be established:

"The assessment of the data will be the most important and critical instrument," Weiss says. After the Japanese government's disastrous information policies at the beginning of the catastrophe, the UN wants to encourage transparency and independence. In May, UNSCEAR will publish its first report, and another big summary report is scheduled for May 2013.

The experts agree on one main point: The psychological consequences of the nuclear catastrophe are a greater risk to the population than radiation. There was a similar conclusion after the Chernobyl disaster, when many of those evacuated suffered from stress and depression. They ate fewer healthy foods, and smoked and drank more, all of which can increase the risk of cancer.

Nurse Matsumoto agrees. The biggest problem for the Katsurao refugees right now is not radiation, but too little physical activity. Most of the townspeople are farmers who worked hard before the catastrophe. Now they sit in their emergency accommodations, and eat fatty pre-packaged foods instead of homegrown vegetables, which could put them at risk for increased cholesterol and blood sugar levels.

"Some are already suffering from depression," Matsumoto says, adding that the refugees have the dual burden of having lost their jobs, and their homes. "And they don't know how things are going to turn out."