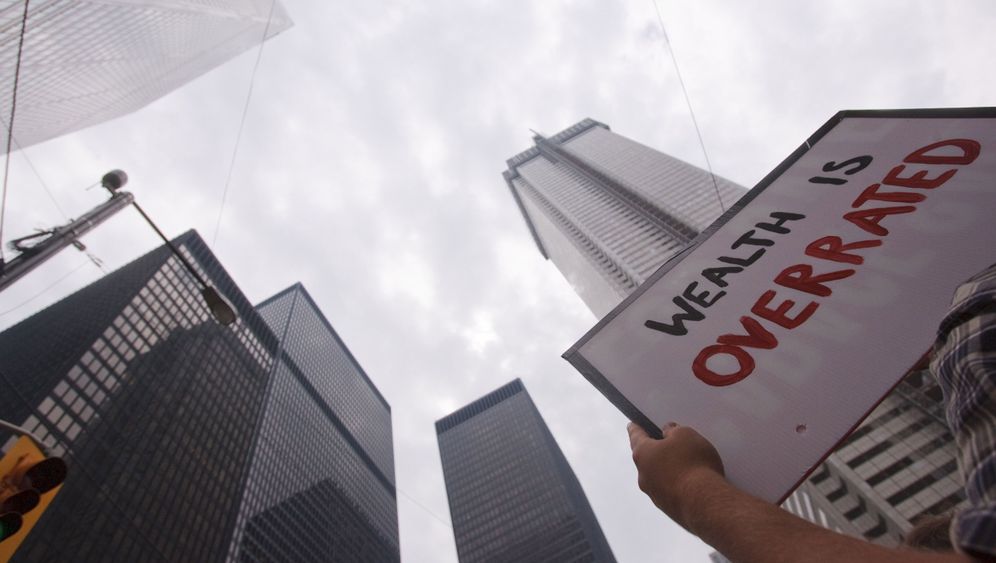 At least Chancellor Angela Merkel managed to look happy. The German team had just beaten England 4:1 at the World Cup as a radiant Merkel addressed the press at the summit of the 20 leading developed and emerging economies in Toronto. "This was a great game and a great victory," she said after watching the second half of the game together with British Prime Minister David Cameron. "I am still very moved."

The chancellor, who was wearing a garish reddish-orange blazer, was in a jubilant mood. She wanted to immediately announce another victory -- this time one of her own.

"This is more than I expected," Merkel said, referring to the agreement by the G-20 states that the developed industrial nations would halve their budget deficits by 2013. From 2016 onwards, they will work toward reducing their debt levels. "Countries will then have balanced budgets, so they can look at reducing total debt," Merkel said. The dates happen to correspond exactly to Germany's own timetable for reducing its debts, as anchored in its constitution under the 2009 "debt brake" amendment. "The fact that this (timetable) has been accepted by the industrialized countries is a success," the chancellor commented.

Merkel has said in the past that she doesn't like to think in terms of winners and losers. But speaking in Toronto, the German leader seemed to be feeling ever-so-slightly triumphant. She also appeared to have temporarily forgotten her own maxim that global summits should not set unrealistic objectives.

In reality, the results of the G-20 summit are much less impressive than Merkel would have the press believe. The expectations for the Toronto meeting had been low -- and they were not exceeded.

At first glance, the promises of the G-20 nations, which were meeting in this format for the fourth time, sounded impressive. National deficits will be "at least" halved by 2013, according to the summit's closing statement. But the agreement has no teeth, given that it does not foresee any binding mechanisms to make sure that the commitment is kept. Every country will manage its own cost-cutting efforts, with some taking action sooner, others later. The measures will be "tailored to national circumstances," the statement reads.

The G-20 members may have been united during the crisis, but now they are diverging -- both in terms of regulation and their economic health. National interests have once again become more important than the big picture.

Merkel wants to economize. The British have no other choice but to do so. China is allowing its currency to slowly appreciate against the dollar. And the Americans are expected to continue with their strategy of racking up new debt, at least for the time being.

Different countries have "differentiated responses," US President Barack Obama said Saturday. It's a formulation that is intended to save face. Obama insisted that countries shared the goal of "long-term sustainable growth" that creates more jobs.

In the run-up to the G-20 summit, the US and Germany had traded salvoes over their differing approaches to tackling the economic crisis. Obama wants more stimulus spending in Europe to ensure that the fragile economic recovery isn't jeopardized, while Merkel is adamant that austerity measures are the correct response to the European debt crisis.

Already on Friday, at the G-8 summit that preceded the G-20 meeting, Obama had made it clear that he did not want open confrontation over growth strategies, according to sources in the German delegation. Then, speaking at the start of the official G-20 dinner on Saturday evening, Obama praised European efforts to reduce their deficits, something that the German side interpreted as a signal of reconciliation.

He left the dirty work to others, such as US Treasury Secretary Timothy Geithner. "Without growth now, deficits will rise further and undermine future growth," Geithner said. History shows the devastating consequences of a premature end to state stimulus spending, he argued, citing the example of the Great Depression.

This line of argument did not, however, make much of an impact in Toronto. Geithner and his boss Obama also seem to be losing support on this issue among US voters.

The G-20 is now threatening to become a club of members that blame each other for their problems. Even before the summit, the Europeans had reacted with annoyance to Washington's lectures. "Governments should not become addicted to borrowing as a quick fix to stimulate demand," German Finance Minister Wolfgang Schäuble said. "The greatest risk, if there is a risk out there, is the sovereign debt risk," said the British finance minister, George Osborne, in an interview with the Globe and Mail. The dispute, it seems, is set to continue.

China, meanwhile, managed to cleverly avoid having the alleged undervaluation of its currency become an issue at the summit, by announcing prior to the meeting that it would allow the renminbi to appreciate slightly against the dollar. Optimists saw the move as a signal that Beijing would stop subsidizing its exports through an artificially low exchange rate. On the sidelines of the summit, Obama promptly invited Chinese President Hu Jintao for a state visit to the US.

But the Chinese delegation put the brakes on the exuberance, leaving no doubt that China will in the future continue to make currency-related decisions independently and not in response to external pressure.

"Beijing is practiced at making concessions that are just enough to cool external pressure without really amounting to substantive policy shifts," Andrew Small, an expert on China at the German Marshall Fund, told SPIEGEL ONLINE in an interview. The currency concession "does not represent some greater move towards responsibility on Beijing's part," he explained. "The goal is still very much to use China's stronger power position to ensure that it can concentrate on a relatively narrow set of domestically focused interests."

Creating Jobs at Any Price

Now, regulations for the global financial system are to be discussed further at the next summit in South Korea. It won't be easy, particularly given the different strategies in use to combat the crisis.

The International Labour Organization, for example, issued a report earlier this month which found that global unemployment rose by 212 million as a result of the crisis -- an unprecedented jump of 34 million, despite economic stimulus measures. The report did find, however, that without such measures, a further 55 million jobs would have been lost.

The big question now is: Will the stimulus efforts already undertaken be enough? Or will the bad economic news once again dominate the headlines?

In the US, the unemployment rate has so far refused to budge from 10 percent -- a level that is unusually high for the US. The number of long-term unemployed is growing. Obama wants to create jobs, no matter what the cost, and he has little time to reflect on his setback on the global stage.

Indeed, the White House released details of the president's next trip even as he was attending the G-20 summit in Toronto. He will be flying to Racine, Wisconsin on Wednesday for a town hall meeting. The subject: the situation of the US economy.