By Friday evening, the heads of the world's 20 biggest economies -- from the US to South Africa, encompassing 85 percent of global economic activity -- will have dined, met, lunched, met again, and made their pronouncements.

If history is any judge, there may not be much in the way of immediate or lasting results.

Certainly, weighty issues are on the table at this week's G-20 summit in Pittsburgh: rebalancing world commerce, reforming the global financial system, reining in executive pay, fending off protectionism, and plotting out how to extricate national governments from deep involvement in the financial markets. But already, officials are seeking to tamp down any lofty expectations established by the last two summits -- high-octane events held in Washington last fall and in London in April amid a punishing financial crisis, and which are widely heralded as having helped to stop the global economy's slide into depression. "This is not a trillion-dollar summit," Mike Froman, White House deputy national security adviser for international economic affairs, told reporters last week.

Few global economic summits measure up to the legendary Bretton Woods agreements of 1944, which established the world economic order for the next three decades. Since then, most conclaves have been less ambitious and have yielded mixed results. The 1985 Plaza Accord, signed by Japan, the US, France, West Germany, and Britain at New York's Plaza Hotel, pushed down the value of the dollar to help the US out of recession and ease the country's trade deficit. Just two years later, the Louvre Accord (which added Canada to the mix) sought to slow the dollar's decline again, but its precepts were largely abandoned soon after.

The most successful events have been those bringing together technocrats and finance ministers over extended periods, rather than heads of state gathering for a 24-hour series of photo ops. "Certainly in the last few years they've been mostly elegant garden parties, it seems to me," says economic historian and author John Steele Gordon.

Simon Johnson, a former chief economist of the International Monetary Fund who teaches at the Massachusetts Institute of Technology, says G-20 leaders simply are not grappling with the biggest issues lingering from the global financial collapse. Instead, they are drafting plans to fix problems in the "medium run" -- postponing difficult choices until a time when new developments will demand a different approach still. "The G-20 is dropping the ball," Johnson said. Not only is the glass not half-full when it comes to global coordination on economic and financial policy, "I'm saying there is no glass."

Of course, even some critics say it's worthwhile to bring heads of state together periodically, particularly in the bilateral, side meetings that accompany group summits. President Barack Obama and China's Hu Jintao were expected in their meeting on Sept. 22, just ahead of the G-20 summit, to try to smooth over tensions resulting from the US president's Sept. 11 decision to slap high tariffs on Chinese-made tires.

Plus, simply having a forum like the G-20 allows for speedy communication and cooperation, which proved invaluable during last fall's financial crisis, and again this spring. Its existence clearly signaled to financial markets that world leaders were prepared to coordinate stimulus spending, monetary policy, and other moves to stabilize the economy. "It's big and clumsy, and very often hobbled by procedure. There are just too many voices to really get anything done" says Kenneth Rogoff, a Harvard economist specializing in international issues. "But the crisis definitely showed what it can do."

Adds Edwin M. Truman, a senior fellow at the Peterson Institute for International Economics in Washington, D.C.: "They are a bit like the fire brigade: They meet even when there isn't a fire. If you don't practice, you don't fight fires very well."

Some policymakers and analysts hold out hope for real, if incremental, progress on several fronts this week.

Analysts cite rebalancing the global economy as the key issue of the summit, chiefly ensuring that the US -- whose companies, consumers, and government have borrowed to the hilt in recent years -- continues to save more and spend less, and that China -- which has amassed a huge surplus by selling Americans its exports -- steps up its nascent shift toward a more consumer-driven economy and away from exports. While economists differ on how much global imbalances contributed to the financial crisis, most agree they aren't sustainable -- and worldwide growth must slow unless the US saves and China spends.

Much of the needed change must flow through domestic institutions and legislators, however. While taking tentative steps toward shifting to a domestically driven economy, China has shown itself reluctant to move quickly for fear of spurring social unrest. The US, already deeply in debt and contemplating potentially costly new government spending programs -- a hot topic in Congress, after all, is whether to extend or even expand the $8,000 (€5,400) federal tax credit for first-time home buyers -- is likely to have a hard time weaning itself from its credit addiction.

"It's important to share notes and it's important to share views, and to try to build understanding, but it's not something you put in a communiqué," says Nicolas Veron, a research fellow at the Bruegels economic think tank in Brussels. "Governments are very touchy about their fiscal and macroeconomic sovereignty."

That's a common complaint about international agreements like those that tend to come out of global summits: There are no enforcement mechanisms. But Truman says that's something of a red herring -- international enforcement mechanisms nearly always rely on the voluntary compliance of the participants. "The issue is to try to forge a consensus, have a broader understanding, encourage countries to have policies that are in the right direction," he says.

And, of course, there is often considerable political hay to be made back home with a seemingly successful summit. German Chancellor Angela Merkel faces re-election Sunday, and it's likely no accident that executive pay -- a hot-button issue with the public on both sides of the Atlantic -- has become a key issue going into this meeting. "Executive compensation is such a political winner, they're going to have to come out with something," Rogoff says.

Protectionism on the Rise

Other areas of financial reform, while high on must-do lists of most world governments, are likely to get less attention. Partly, that's because high-level agreements in April have yet to be worked out in detail -- and partly because hammering out those details is proving, as many expected, to be delicate work. Moreover, "most of the regulatory issues are so complex that, beyond saying 'I'm going to do something about it,' Joe Public has no way of knowing if they did anything," Rogoff says.

On trade, the World Bank, the World Trade Organization, and numerous think thanks have warned that G-20 members continue to raise protectionist barriers despite promising not to at previous summits. Their reports cite more than 100 protectionist measures, which include a US ban on certain Mexican trucks from operating in the US and a "Buy American" provision in the Administration's $787 billion (€532 billion) stimulus package.

Another issue that is likely to arise again is efforts by China, Russia, and other countries to create some other form of reserve global currency in addition to the dollar. Beijing has most vocally complained about its heavy reliance on dollar-denominated reserves, and said that it intends to take steps to balance its investment portfolio. As a start, China has completed relatively small trade deals with Brazil, Indonesia, Malaysia, South Korea, and other countries denominated in the yuan.

But US analysts say the push, while serious, is unlikely to lead to big changes soon. "This is a political imperative for the Chinese and perhaps some of the oil exporters something they need to talk about the same way executive compensation is for Americans," Rogoff says. "It's going to happen, but most likely over 40 years." 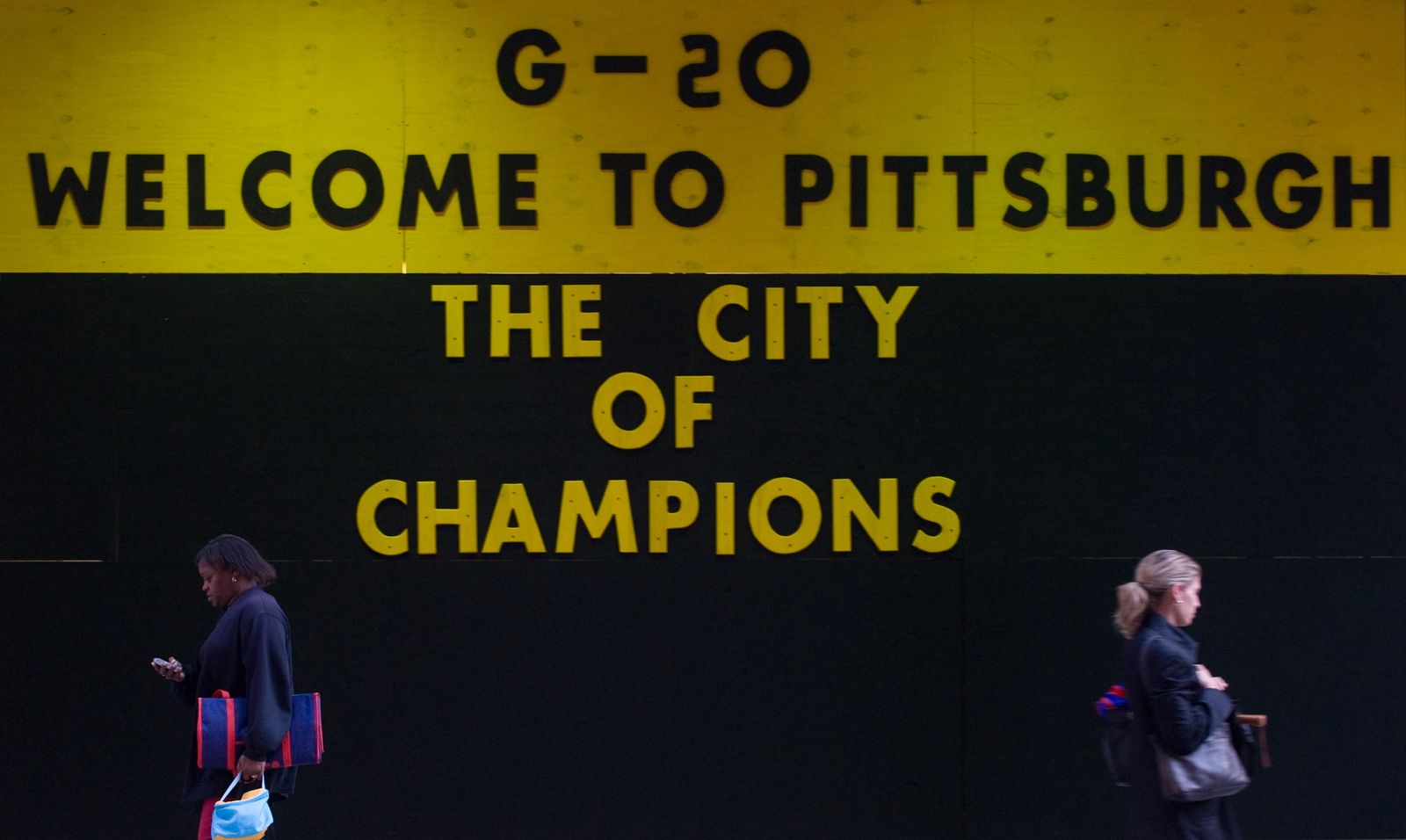 Rebalancing global trade and reforming the global financial system are just two agenda items to be discussed at the summit in Pittsburgh.