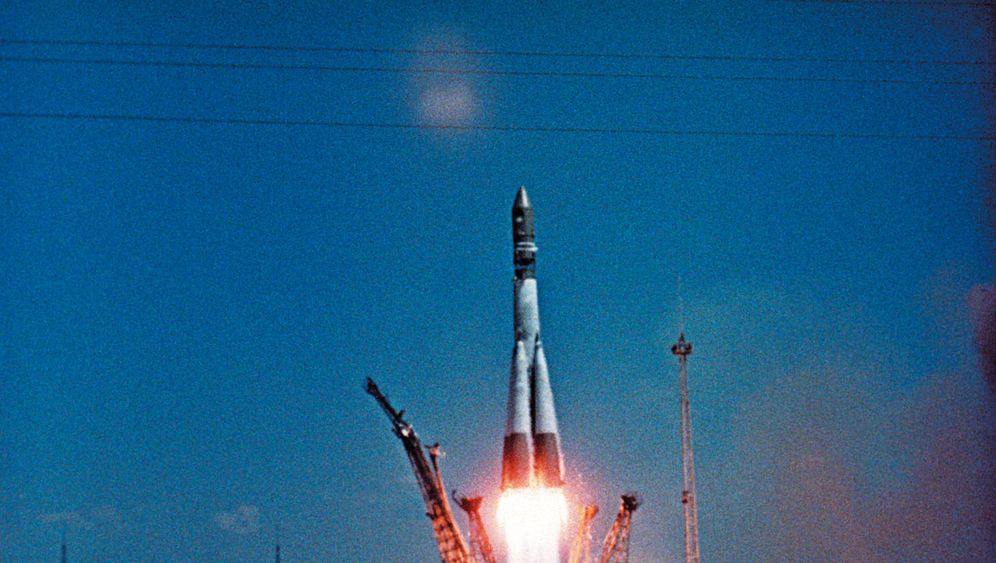 Photo Gallery: A National Hero and a Role Model

On April 10, 1961, a 27-year-old father reached for a pen and paper. To prepare for his journey, Yuri Gagarin began writing a farewell letter to his wife and daughters. "Some accident may happen here too ... I ask you all ... not to waste yourself with grief," he wrote. Two days later, he became the first man in history to orbit the world in a spaceship. The Vostok, meaning "East" in Russian, flew in space for 108 minutes.

Half a century ago, Gagarin's spaceflight kicked off the era of human space travel. The mission, in which the radio call sign "cedar" was used, propelled the Soviet Union to the forefront of the space race for manned flights. Despite temporary lapses, today's Russia has managed to retain a leading position in space travel.

"If you are going to be at all, then be first," Gagarin wrote in what, fortunately, turned out to be a premature farewell letter. The sentence has become a motto for a whole generation of Soviet space pioneers. The supremacy of communist rockets was established from out of the ruins of a war-torn country. Particularly at the start of the space program, under the leadership of Sergei Korolyov who once said that "anyone can build complicated things," they notched up one record after another. They put the first satellite and the first dog in orbit -- the unfortunate Laika, who paid for her first flight with her life. Then the first man in space, then the first woman, then they oversaw the completion of the first spacewalk. The West was traumatized and filled with consternation.

Gagarin's early death in 1968 when his Mig 15 training jet crashed came as a shock for the Soviets. His death came only a short time after that of Soviet space program mastermind Korolyov, who perished during a poorly performed routine operation in 1966. On top of those losses, the Soviets were beaten in the race to put the first man on the Moon in 1969. But the legacy of the Soviet rocket pioneers helped to return them to a position of supremacy in space once again. In addition to largely robust technology, this was attributable what has arguably been a lack of interest on the part of the Americans and, perhaps, an inability to ambitiously pursue its space program in recent years.

Following the expected retirement of NASA's Space Shuttle fleet this June, Russia's Soyuz capsules will be the only spaceships available to shuttle astronauts to the International Space Station (ISS) for some years to come. Recently the Soyuz was given a bit of an overhaul, with the addition of a digital steering system, but the lion's share of the technology in the capsules harkens back to the very start of the Soviet space program in the 1950s and 1960s. And even if the Europeans and Japanese have built highly modern cargo transporters, the supply and continued operation of the International Space Station would be impossible without the Russians.

A Far Eastern Space Base

NASA is feverishly getting private companies, like SpaceX, to develop spacecraft capable of delivering cargo and astronauts to the ISS. But it still had to strike a deal with the Russians as well recently to enable its astronauts to travel to the ISS in Soyuz spacecraft through 2016. But it comes at a price, with the Americans paying $753 million to hitchhike to the space station using Russian technology. It's money that the Russians are likley to greet with a warm reception. Russia's federal space agency, Roscosmos, has a budget that is only one-fifth as big as that of NASA. Nevertheless, the Russians were responsible for 37 percent of all global rocket launches in 2009.

Still, Russian space travel has been plagued by a number of problems recently. In October 2007, a Soyuz capsule with steering problems barely managed to avoid an accident. And for a number of hours last December, mission control in Moscow lost contact with the ISS and a capsule on its way to the space base. In September, the undocking of a Soyuz capsule from the space station was delayed due to a technical problem with the spacecraft. And in July, the unmanned Russian cargo craft Progress missed the space station by a number of kilometers because television signals critically interrupted its communication system during the approach.

The Russian satellite program has also been beset with difficulties. In Febuary, the military satellite GEO-IK2 got lost and, in December, a Proton-M rocket with three navigational satellites on board that had been improperly refueled crashed. Despite -- or perhaps because of -- these problems, Russian Prime Minister Vladimir Putin continues to push the Russian space sector forward. Within the scope of a decade, he has boosted the Roscosmos budget 12-fold, lifting it from around $300 million in 2002 to $3.8 billion in 2011.

'One of Modern Russia's Most Ambitious Projects'

Russia's leadership is not only focused on the prestige associated with success in space; it is also seeking to boost the program's fortunes on the ground. Svobodny is a tiny in Russia's far east. It lies 6,000 kilometers (3,728 miles) from Moscow, but it is only 80 kilometers from the Chinese border. Since the end of the 1990s, 2 million people have moved away from the region. The exodus is comprised mostly of young people who have no opportunities here. To stop the drain of youth and brains, the Kremlim wants to establish a brand new space port here over the course of the next nine years -- the Vostochny Cosmodrome.

The project has been given top priority. "The construction of a new space center ... is one of modern Russia's biggest and most ambitious projects," Putin said last year.

And starting this summer, Soyuz spacecraft will also begin launching from the European Space Agency's space port in Kourou, French Guiana in South America. With its close proximity to the equator, the space port offers massive fuel savings advantages. But the future of Russian space travel will be focused on Vostochny. By 2015 the first un-manned rockets are due to take off, and by 2018 the first manned missions are expected start.

But that is all still a long way off. The sparsely populated region lacks infrastructure and people. To solve this problem, the Kremlin wants to create an entire settlement for up to 25,000 new cosmodrome employees over the next few years.

The project will require an investment of $13.5 billion, but the Kremlin hopes to kill two birds with one stone. Until now, Russia has been using the Baikonur Cosmodrome in Kazakhstan, the site from which Gagarin began the fateful first manned flight into space. But it costs Russia $115 million a year to rent Baikonur from the former Soviet satellite country. That's why the new cosmodrome is to be located on Russian soil, in a geostrategically important region near the border with China.

The Vostochny space port could be used as a base for launching the new Rus-M rockets developed by the Energiya space company. The rocket is to be powered by RD-180 engines first constructed during the Soviet era, which were slightly modernized in the 1990s and are currently celebrating export success to the United States at around $10 million each. Russia is also planning a new space ship for manned missions. Both components could replace the Soyuz workhorses by the end of the decade.

Russia also plans to play a leading role in future Mars missions. At the moment six men from Russia, Europe and China are simulating a 520-day flight to Mars and back in an experiment to test how isolation affects people. If a flight to Mars is undertaken one day, Russian researchers want to develop its propulsion. They plan to power the engines with nuclear reactors.

Russia wants to make up lost ground in unmanned space travel as well. Since the crash of the Mars-96 mission 15 years ago, the country hasn't dispatched a probe to another planet. In November, Roskosmos plans to send a research robot to the Mars moon Phobos. Phobos Grunt isn't just intended to land there, but also to return to earth with ground samples. That would make it the first probe to return with samples from such a great distance. The European Space Agency wants to support the bold project logistically with its ground stations. "If the Russian's succeed with their Phobos mission," says Rene Pischel, head of the Moscow ESA, "it would be a phenomenal achievement."

But the Russians will need to sort out technical problems before they can chalk up further successes. Otherwise they will risk embarrassing glitches like the recent trouble with the Soyuz TMA-21 spaceship. The launch of the capsule with two Russians and one American on board had to be postponed due to problems wit the communication system. It was a PR blow, not least because a great name adorned the spaceship: Gagarin.