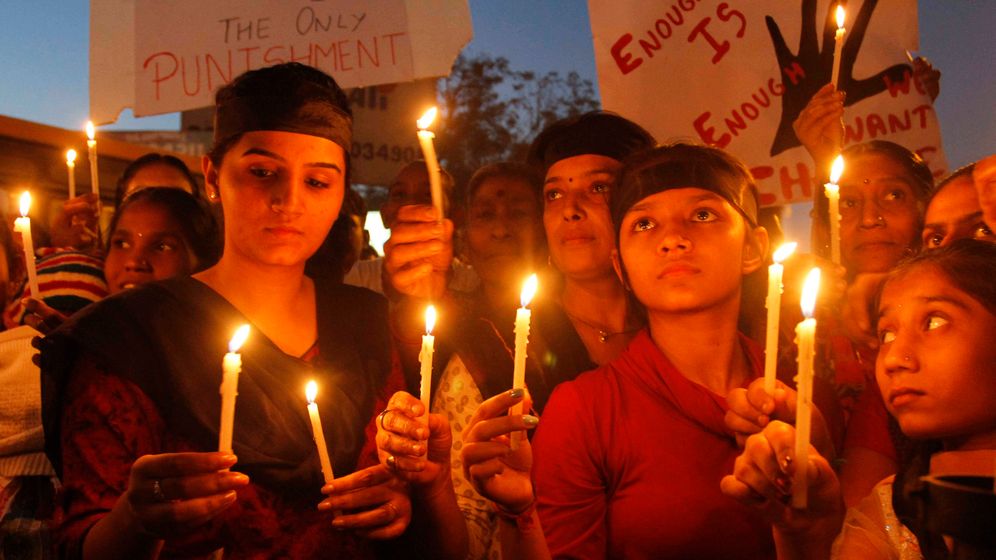 In the past few weeks, something has happened in India that we never thought possible: We have seen an unprecedented show of solidarity and anger over the horrific gang rape of a 23-year old woman, who later died of her injuries. The brutal killing of this nameless student -- an ambitious young woman from a small town who worked hard to train as a physiotherapist and was a role model to her two younger brothers -- moves us because she was one of us, a sister, a daughter and a wife.

For years, I have been writing about rape and abuse, about the killings of female fetuses, of girls and of women in India. But when I heard about it happening right in the middle of Delhi, in the heart of our capital, on a public bus, it felt like it happened to me. Fortunately, I have never had to experience rape myself. During my growing up years, however, I of course experienced molestation and verbal abuse by males. And even as a working woman it was part of my life -- as it is part of any woman's life in India. Friends of mine have experienced much worse, and they have been traumatized by it.

The young woman has been called "Nirbhaya", the fearless, by the press, and she has become a symbol of India's terrible misogyny. India's middle class has held protest meetings and candle light vigils in many cities all over the country. The anger, despite reassurances from the government, refuses to die down. Even more unexpected has been the sight of young men pouring onto the streets, expressing their personal sorrow over escalating gender violence, as this emerging "superpower" becomes increasingly unsafe for women.

The response from the government has been slow and callous, with its clumsy attempt to squash the protests. This lack of empathy within the ruling coalition, and its inability to understand or comprehend the betrayal that Indian women feel today has left many aghast.

As Delhi was converted into a fortress to prevent protestors from assembling near the iconic India Gate, it was pointed out that most of the women parliamentarians who shed tears and spoke passionately about the gang rape victim lead extremely well-protected lives. Surrounded by security guards and the comforts of power, they have no idea about the daily humiliation and struggle of ordinary women. The disconnect between the hard working middle classes and their elected representatives was never more apparent than when the police was ordered to crack down on unarmed protestors recently. In those few, shocking hours, it was difficult to believe that India is a democracy.

It also showed the contempt with which India's rising urban masses (especially women) are treated by the government, whose chief preoccupation seems to be that of winning elections by throwing money at voters, particularly in rural areas. The government has spent much more time in recent weeks on explaining "direct cash transfers" to the poor in the countryside than on the alarming status of Indian women.

The government would have been content to ship the rape victim abroad for "treatment" (though she was already slipping into a coma) and secretly cremate her in the early hours of a winter morning so that people would forget her. But none of the diversionary tactics have worked. Thanks to the power of the Internet and the media, the memory of the gang rape victim and what happened to her continues to grab headlines, forcing the government to take at least this one case seriously.

The continuing outpouring of grief and rage has completely surprised the patriarchal system, especially because gang rape is nothing new to post independence, "modernizing" India. It has been used as a weapon of oppression for years, including during the partition of India and thereafter. Today, increasing numbers of young men are migrating to the cities for work, bringing sexual frustration and personal alienation with them -- along with a deeply ingrained misogyny. This has perhaps led them to target vulnerable women like the one in Delhi. Gang rape has become an increasingly worrying phenomenon and, with a slow, inefficient judiciary, perpetrators are assured of walking away without suffering any consequences. Indeed, it is often the victim who is forced to live with the stigma and in some recent cases, the woman has killed herself due to unending humiliation at the hands of the police, the courts and even the rapists themselves. In a very few instances, victims have taken revenge themselves, having given up on the system completely.

The best known case is that of Phoolan Devi in the 1980s. From the poor, Dalit caste, she had married at 11 only to be abused by her husband and then rejected. She was then raped by several men. To seek revenge, she joined a criminal gang and later killed one of her attackers. Phoolan Devi was ultimately jailed for 11 years without ever having been convicted, a fate escaped by the upper caste men who raped her. Upon her release she was elected a member of parliament and her life story was made into a film. But in 2001, she was shot dead in a hail of bullets on the streets of Delhi, murdered by a family member of one of her rapists.

Before women are forced into similar retaliatory violence for self protection, it is essential that the Indian government fast tracks the much needed reforms and laws which will secure and enhance the status of women, legally as well as socially. But there are many road blocks to empowering women, some of which are maintained by politicians to retain their hold on the masses.

One of the main problems is India's caste system, which has been revived over and over again by various governments to create voting blocks. Men are usually the beneficiaries; in each caste, the lowest social rung continues to be occupied by women, even in urban India, no matter how educated or well placed she might be.

This has meant that anti-women practices, like gendercide -- in which an estimated 30 million girls have been killed so far, through sex-selective abortions and infanticide -- bride burning or domestic violence (often for lack of dowry) continue to be practiced. Honor killings are also on the rise in both rural and urban areas. A skewed gender ratio, currently there are just 940 women for every 1,000 men, has meant that Indian women, despite recent corrective measures, are an endangered minority. And they are often at the mercy of predatory men, both at home and on the streets.

Delhi, which is governed by a woman, shamefully has one of the worst gender ratios in the country and a very high rate of sexual offences. More than 80 percent of Delhi's women have faced some form of sexual harassment and are actively discouraged from going out alone at night, or even during the day.

This is a harsh reality often denied by the Indian state, which prefers to call attention to favorable examples of successful women's groups and individuals rather than to address the larger issue of a willful neglect of millions of women who are being left out of the development story. These women have little or no security or help from the state -- nor indeed from their immediate social surroundings, a situation which often reinforces their fragile existences.

While most rural women have remained unrepresented in the recent protests, their status is no less vulnerable. Furthermore, they face greater hurdles to organizing themselves; most of them remain semi-literate, are dependent on their families and have no access to the Internet. Fortunately, thanks to the virtual world, the middle class urban woman is finally beginning to organize herself and her sisters onto a joint platform, which will undoubtedly change the environment within which women have become a deliberate target of violence and abuse.

It is a paradox: On one hand, women are increasingly educated and encouraged to join the work force -- and female deities are worshipped in the Hindu religion. On the other hand, the atmosphere in which women live and work remains unreformed and prejudiced. Patriarchy is a cruel beast that continues to prowl the streets of big cities just as it haunts the dusty lanes of villages.

Thus, while there were no candle-light vigils for Phoolan Devi after she was killed more than 10 years ago -- nor for any of the subsequent thousands of victims of molestations and rapes -- this time women are no longer prepared to remain silent. They are now demanding the promised changes to rape law, which continues to be archaic and does not include marital rape. They are also demanding the passage of a bill providing for a gender quota in parliament, which would force political parties to field more female candidates. At present most political parties, including those headed by women, have a very poor record when it comes to adequate gender diversity.

Perhaps it will be a combination of political power and pressure from the streets which will ultimately give Indian women a much needed sense of security. At present, however, the fear is that the current government is far too patriarchal and out-of-touch with women's problems to make the required changes speedily enough -- even though it has finally set up one fast-track court to hear the high profile gang rape case. It has also asked for suggestions from the public for changes in the rape law.

Despite this, women have continued to be raped in various parts of the country, including in one case by a Congress Party leader in the state of Assam. The only hope now is that the public movement triggered by the very unfortunate rape and death of a brave young woman coalesces into a force for change. With general elections approaching in 2014, it might just be the prospect of losing the votes of middle-class urban women that will ensure that the government listens to them and their needs.