The Israeli government, which has faced a storm of international criticism for its deadly raid on a Gaza-bound aid ship on May 31, has accused individual participants and organizers of the Gaza aid flotilla of having links with terrorist organizations, a charge those accused vehemently deny.

Initially the accusations focused on the Turkish aid organization IHH which had purchased three of the six ships in the convoy. Most of the nine Turkish activists killed in the raid appear to have been IHH members. But Israel has since then also accused five individuals who appear to have no connection with IHH of having links with al-Qaida, Hamas and the Islamic Jihad group.

The accusations are almost impossible to verify because the Israeli government appears to be basing them on secret intelligence information, if indeed there is a foundation for their claims. In a statement released on Monday, the Israeli Defence Forces (IDF) released a list of five passengers on board the Turkish vessel Mavi Marmara that the army claimed were "known to be involved in terrorist activity." The people named are:

The list lacks any references to sources. "The following passengers on board the Mavi Marmara are known to be involved in terrorist activity," the statement says at the beginning. The Israeli army provides no evidence to back up its claims.

Publicly available sources contain no information that could back up the accusations. The fact that all five activists have since been released might be due to US diplomatic pressure, Israeli diplomats have suggested. But releasing terrorism supporters runs counter to normal Israeli practice -- that alone implicitly casts doubt on the veracity of the allegations.

The accusations levelled at the Turkish aid organization IHH are similarly complicated. It is certain that the NGO founded in the early 1990s is active around the world, conducts numerous aid projects, sympathizes with Hamas and is clearly anti-Israeli and is sympathetic to Islamist ideology.

But Deputy Israeli Defense Minister Danny Ayalon said on May 31 that the organizers of the convoy had links with international Jihadism and with al-Qaida, a much more serious allegation. Israeli embassies sent background briefing papers to journalists about IHH's supposed links with terrorism, an accusation that was also made by the spokesman for the Israeli foreign ministry. The Israeli ambassador to Denmark said there were "rumors" about an IHH link with al-Qaida, the British daily Independent wrote.

The sourcing regarding accusations levelled against IHH is a little clearer. But there are question marks here too. Virtually all of the accusations that IHH has links with terrorists are based on a small number of sources:

The three documents indicate that, at least in the 1990s, individual IHH members may well have had links to terrorism. But it remains unclear just how this might apply to the whole organization, and whether it is true today.

The IHH vehemently denies all allegations against it. It says that contrary to claims by Bruguiere, no weapons were found in the raid in Turkey. It says it is fundamentally peaceful and that it condemns terrorism. It also says it has no knowledge of the the IHH members that Bruguiere identified as being terrorist helpers.

The picture remains confusing. What is clear that there was a wealth of incriminating indications concerning IHH members in the 1990s, but that there have been no fresh accusations in recent years apart from the Hamas connection.

He added that "it doesn't take much insight to recognize that neither side is being very straightforward." 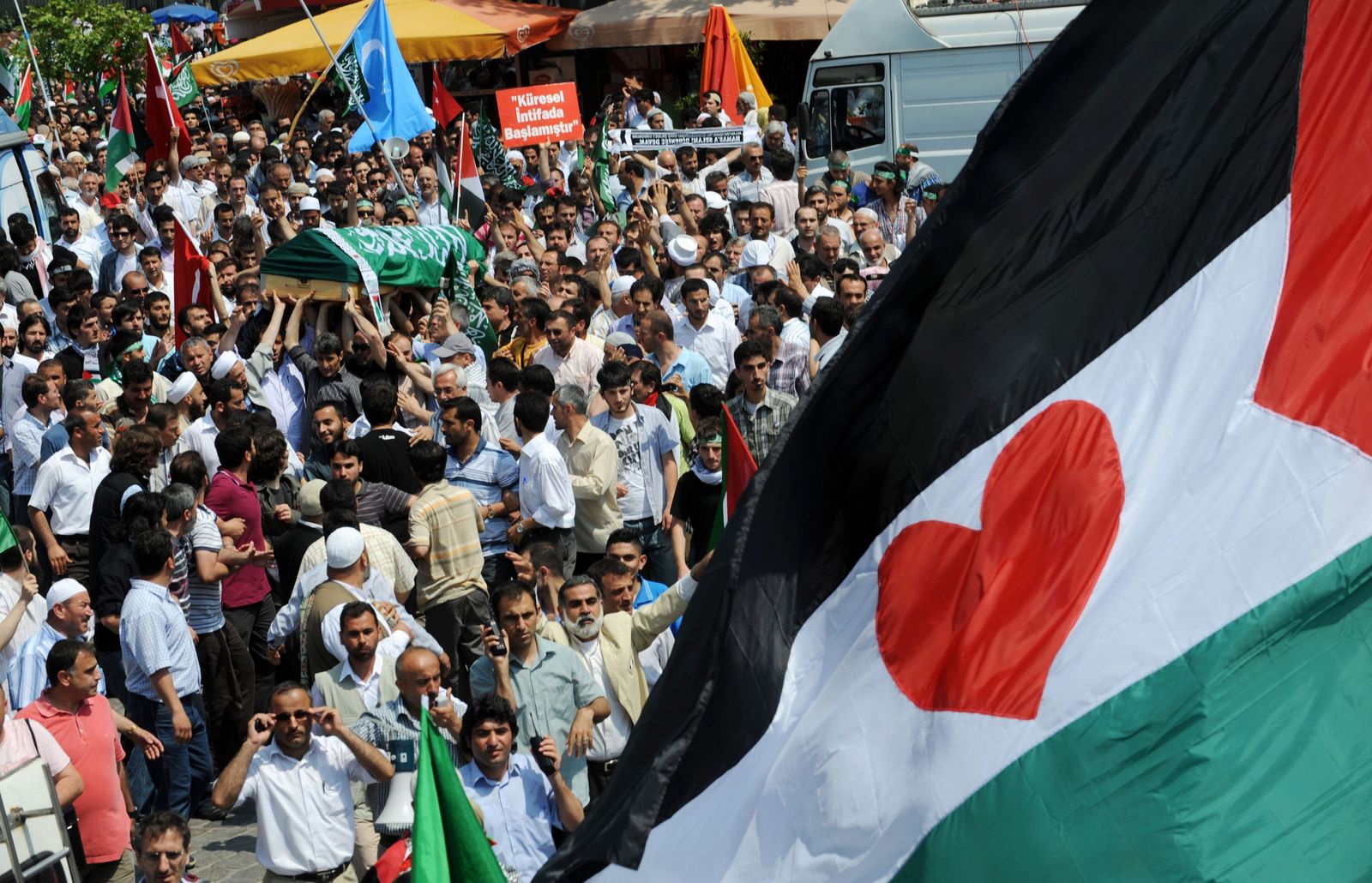 The funeral service in Istanbul for IHH members killed in the Gaza raid.