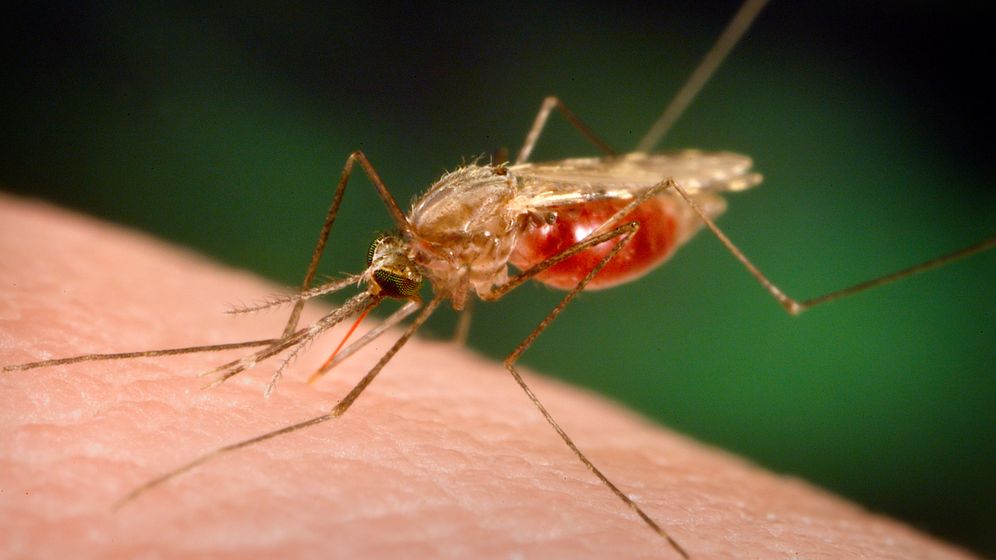 They buzz very, very quietly. That infuriating high-pitched whirring that can rob you of your sleep on summer nights is not part of their repertoire. At this small laboratory near the English university town of Oxford, maintained at a steady 28 degrees Celsius (82 degrees Fahrenheit), the mosquitoes emit no more than a light purr. Their victims can't hear them it until it's almost too late.

Insectophiles might find these animals pretty because of the white markings on their dark bodies. Only the dried drops of blood -- horse blood -- on the gauze lining of their cages reveal how these animals feed.

The insects in question are female yellow-fever mosquitoes, some of the most dangerous animals on the planet. In addition to the illness after which they were named, they also transmit the dengue virus.

Dengue fever is on the rise worldwide and spreading faster than any other insect-borne viral disease. Every year, female mosquitoes infect at least 50 million people in tropical and subtropical regions (the males don't bite). More than 20,000 of their victims -- most of them children -- succumb to their illness.

The mosquitoes at the lab near Oxford serve a rather different purpose: To save human lives. Scientists have implanted a gene they hope will wipe out these mosquitoes' wild cousins. When males from the lab mate with wild females, their larval offspring die within a short space of time. The lab insects have been produced to commit infanticide.

Not Exactly a Villain

Yet something of a scientific thriller has developed around these designer animals. Were anyone to turn it into a horror movie, the story would go something like this: At the heart of the tale there are the managers and scientists at a British biotech firm. These are the bad guys. Their crime: Secretly exposing the unsuspecting inhabitants of a faraway Caribbean island to mutant mosquitoes; a flying army of horrific creatures hungry for people to prey upon. The company -- of course -- is only interested in the huge profits it hopes to make. And then there are the good guys; upstanding researchers and idealistic activists determined to ruin the bad guys' evil plans.

By this interpretation, Luke Alphey would be the head villain of the story, though his boyish looks and lean stature wouldn't exactly typecast him for the role. At the most, his occasional braying laughter would fit the character. Alphey, 48, is the co-founder and chief scientific officer of Oxitec, an Oxford University spin-off. Oxitec headquarters is located in a brick building covered with wild grape in Milton Park, an industrial zone by the road leading to the famous university town.

It was Alphey, a genetic engineer, who dreamed up the idea of the novel insects while he was at Oxford. Today, standing next to the blood-spotted mosquito cages in a disposable lab coat, he defends himself, his company and his mosquitoes. "It was the right time to go out into the field," he insists.

Alphey is referring to the fall of 2009, when he and his colleagues released their designer mosquitoes on Grand Cayman, an island in the Caribbean. The following year they released over three million more of these genetically-modified (GM) mosquitoes.

The experiment will go down in scientific history as the first release of GM insects that could bite humans. What's scandalous about this field trial is that it was largely conducted in secret. Few people on Grand Cayman knew the mosquitoes were genetically modified. The local population was largely kept in the dark.

When the trials were made public a year after the first release of the insects, the locals wondered whether they'd been bitten by these potentially dangerous Frankenstein mosquitoes. Understandably, they felt taken advantage of. "I believe that we are the guinea pigs here," wrote a disgruntled islander on the website of the Cayman News Service. Another asked: "Are we considered so dim-witted and unlearned that we cannot participate in our own environment? Were we considered to be a calculated risk?" Nongovernmental organizations like GeneWatch, a British NGO, have condemned the experiments with GM mosquitoes.

The key question is about what scientists may and may not do. Can they simply release flying, human-biting laboratory-made creatures into the air? And who controls such activity if this is undertaken for a firm that seeks to profit from it?

Companies don't like divulging their plans, preferring to keep their technology under wraps, particularly when it comes to potential dangers. As such, the work of biotech companies must necessarily be the exact opposite of what scientific research ought to be: transparent. That's the crux of the matter.

The genetically-modified creatures are also currently buzzing around near the city of Juazeiro in eastern Brazil. Mosquitoes are due to be released in other dengue-plagued countries too, including Panama, India, Singapore, Thailand and Vietnam. They could also soon turn up in Key West, Florida as early as March; preparations there are underway.

And that's just the mosquitoes.

Swarms of genetically modified pink bollworm moths, a plant pest in their natural state, have already been unleashed over the fields of Arizona. Oxitec's latest plan involves another genetically engineered moth, the diamond-back or cabbage moth, which it wants to release in England. In the future, it is hoped, these agricultural pests will likewise mate with naturally-occurring animals to produce dead offspring.

"Oxitec wants to become the next Monsanto," says Gerald Franz, the molecular geneticist at the International Atomic Energy Agency's insect laboratory in the Austrian town of Seibersdorf, referring to the American biotech giant that dominates the business in GM agricultural plants. Indeed, Oxitec already has a monopoly on genetically-modified insects.

The findings of a study published in the renowned scientific journal PLoS Neglected Tropical Diseases on Tuesday could well make life even more difficult for Oxitec. The paper was written by Guy Reeves and his colleagues. The 39-year-old Briton with curly blond locks is a researcher at the Max Planck Institute for Evolutionary Biology in Plön, northern Germany.

The geneticist has searched through scientific journals, permit applications and regulations. His findings, reviewed and approved by his peers, primarily reveal one thing: The Grand Cayman experiment wasn't an exception; a mere oversight by muddle-headed scientists that somehow forgot to inform the local population adequately on their way from the lab to the field.

"Whatever happened in the Caymans is quite likely to be used as a model for releases in your community, wherever you live in the world," Reeves suggests.

Through the Back Door

In other words, the approach used in the Caymans was well thought out, as if a small group of ambitious biotech managers were trying to introduce a completely new technology through the back door. There are a number of factors that helped them in their endeavor:

And it is quite possible that Luke Alphey's lab-tweaked creatures will indeed prove to be a blessing for humanity, especially in countries plagued by dengue. The way these creatures precipitate their own demise is extremely ingenious.

Ever since the 1950s, male pests have typically been sterilized by exposing them to radioactivity, and then released to mate with females in the wild. Today a similar effect is created by inserting malevolent genes. Alphey has given his yellow-fever mosquitoes genetic material that the males pass onto their offspring when they mate with wild females. This genetic material could be called a "suicide gene" because the protein it produces poisons the larvae. As a result, the hosts gradually wipe themselves out.

According to Oxitec, this suicide system works not only in the lab, but also in the field, as the trials on Grand Cayman proved. Eighty mating waves with the lab-manipulated males over a period of 11 weeks allegedly reduced the local mosquito population by 80 percent.

And the potential risks? These are only now coming to light in full, partly thanks to the efforts of Guy Reeves.

The problem is that genetically-modified female mosquitoes can still bite humans. This means the protein which kills their own larvae might be injected into humans when the mosquitoes suck their prey's blood, with unknown consequences for the human organism.

However Luke Alphey has a plausible-sounding set of arguments to allay such fears. "We only release males," he says. What's more, he claims the protein isn't produced in the salivary glands, so it isn't in the female mosquito's saliva in the first place. Being bitten by Oxitec's mosquitoes is therefore allegedly just like being bitten by "normal mosquitoes."

It does indeed seem unlikely that the lab animals could cause damage. Nonetheless Alphey admits his technique isn't perfect yet, and GM females may therefore also be released accidentally. And we have to take him at his word that the larva-killing protein definitely can't be injected into the human blood stream. Unfortunately, like so much else, he can offer not peer-reviewed scientific proof.

Alphey says Oxitec spoke to people on Grand Cayman, and that the locals didn't express concern about being bitten by GM mosquitoes. He claims the islanders hadn't even asked him about it. "It's not really for us to tell them what their concerns should be," he says.

It is precisely this attitude -- this lack of openness -- that isn't exactly making Oxitec many friends. Guy Reeves says: "One has to answer these fundamental questions that most people will have before releasing the animals."

Reeves himself is working on even riskier techniques, ones that could permanently change the genetic makeup of entire insect populations. That's why he so vehemently opposes Oxitec's rash field trials: He believes they could trigger a public backlash against this relatively promising new approach, thereby halting research into genetic modification of pests before it really gets off the ground.

He's not alone in his concerns. "If the end result is that this technology isn't accepted, then I've spent the last 20 years conducting research for nothing," says Ernst Wimmer, a developmental biologist at Germany's Göttingen University and one of the pioneers in this field. Nevertheless he says he understands Oxitec's secrecy: "We know about the opponents to genetic engineering, who have destroyed entire experimental crops after they were announced. That, of course, doesn't help us make progress either."