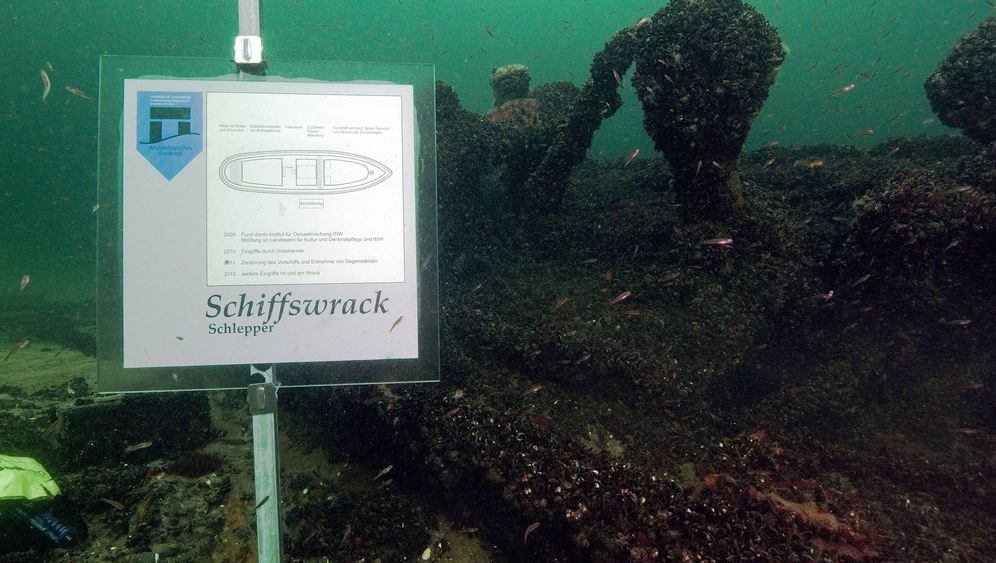 The two-man U-boat was discovered lying at a depth of 18 meters near Boltenhagen off Germany's Baltic Sea coast in 2000. Its plexiglass turret hatch was intact and closed, which prompted authorities to designate it as a war grave because the crew of the vessel, of a type used by the German navy towards the end of World War II to evade Allied sonar detection and sink ships, was believed to still be inside.

Then someone dived down and removed the hatch in 2002. The local government responded by sealing the gap with a steel plate. But there have since been attempts to break it open.

"It's one of our big worries, over the years people keep trying to get into it and that is of course utterly disrespectful," says Detlef Jantzen, an archaeologist at the regional agency for monument protection in the northeastern German state of Mecklenburg-Western Pomerania.

The U-boat is one of some 1,500 marine monuments strewn across the seabed along the coast. The area has a wealth of well-preserved shipwrecks, lost cargo, planes and even ancient settlements submerged through subsidence and rising water levels.

It amounts to a precious historical legacy and gives insight, for example, into boat-building techniques dating back to the Middle Ages and the events that led to the sinkings.

"We have the impression that tampering with the wrecks has increased in recent years," Jantzen told SPIEGEL ONLINE. "The technical equipment generally available keeps on improving, which means that hobby divers and people who don't have the best intentions are able to reach ever more wrecks."

"It's no problem if you just take a look at such monuments without breaking or removing anything but we're seeing that items are being stolen, dismantled and unscrewed, and sometimes they're even using machinery to take things from these wrecks," he adds. "Such trophy hunting is putting the monuments in big danger."

Theft from shipwrecks designated as monuments is a punishable crime. But in many cases, divers are causing damage inadvertently because they're not aware that they're doing anything wrong.

Now the Society of Maritime Archaeology, a group of archaeologists and divers with close links to the monument agency, has started a project to attach signs to frequently visited shipwrecks informing divers that the vessels are historic monuments. The signs will show the layout of the wrecks and provide information on their history.

The chairman of the group, Martin Siegel, said the aim was to appeal to the conscience of divers and boost awareness that the ships must be preserved for research purposes. He said he wasn't aware of any similar projects in other countries, although a signpost had been attached to a vessel lying in Lake Constance bordering Germany, Switzerland and Austria.

"It's only a small minority of divers who go there to steal objects, mostly it's people who don't know they're dealing with a monument and are inadvertently causing damage," Siegel told SPIEGEL ONLINE.

The group attached the first sign last week to a 100-year-old tugboat that was located just three years ago at a depth of nine meters and is believed to have been sunk during or shortly after World War II. The wreck has been damaged by divers since it was found.

Siegel said the Baltic wrecks are at particular risk because there is pent-up demand to inspect them after recreational diving was forbidden in communist East Germany.

The group will start by signposting nine monuments. One particularly valuable wreck is that of the "Darsser Kogge," a 14th century ship that is a rare example of medieval shipbuilding. "It's lying on its side and the remains provide valuable information on construction and manufacturing techniques of the time," said Siegel. "These preserved vessels are often the only source of research into traditional shipbuilding."

There are plans to cover it up to protect it from the currents and from shipworm.

Some 800 to 900 shipwrecks are known to lie in German Baltic waters, and a further 600 to 700 sites are believed to be wrecks or other items, said Jantzen. Only 350 wrecks have been scientifically examined so far.

"It's a mammoth task that takes a lot of time," said Jantzen. "The signs are an attempt to get a grip on the tampering problem through information. If they approach a wreck underwater and see that it's a monument, some people will respect that, one hopes."