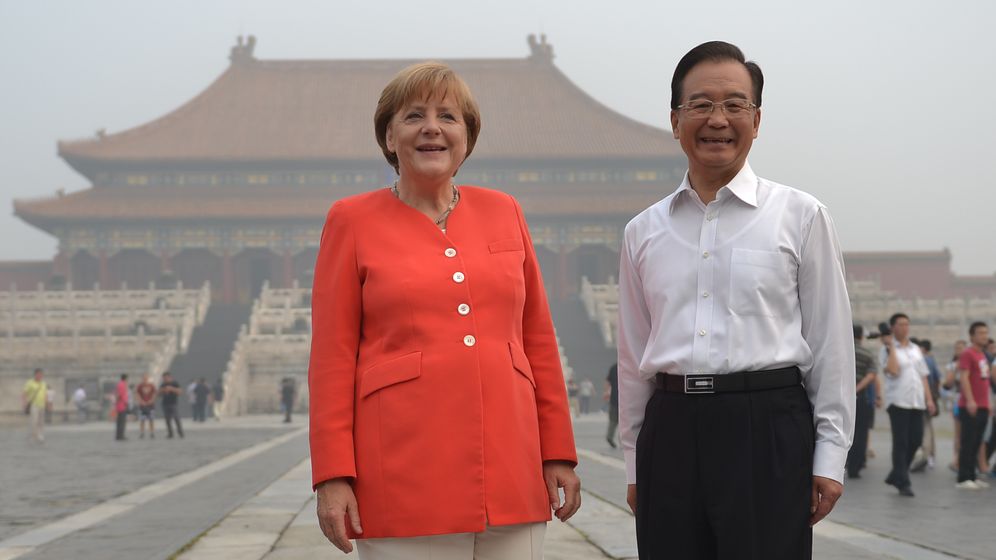 Photo Gallery: All Smiles in China

It is a photo that says pretty much everything there is to say about Chancellor Angela Merkel's two-day visit to China. The image depicts Ai Wei Wei, the bearded artist and dissident, taking the chancellor to lunch in Beijing, she in red blazer and black pants, Ai in a wrinkled shirt and dark athletic shoes.

Unfortunately, however, the chancellor in the image isn't real -- it is just a cardboard cut-out that an impishly grinning Ai holds under his left arm. "Taking Merkel to Lunch" is the ironic title given to the photo, which the artist published via Twitter. Ai released the image on Thursday, just as the real chancellor, together with half of her cabinet, was chatting with China's communist leadership in Beijing's Great Hall of the People.

No, there was no meeting between Merkel and the regime critical artist, a man that China's leadership locked up for 81 days last year before charging him with tax evasion and forcing him to pay millions in back taxes. Merkel has visited China six times now, but she is further away than ever from making such a courageous gesture.

The chancellor's course on China, in fact, has slowly come to resemble the business-first policies pursued by her predecessor Gerhard Schröder. He almost surely approves of the lovely images of her visiting the Airbus plant in Tianjin, where she made a stop just before flying back to Berlin. The factory visit took place a day after a contract was signed for 50 new planes ordered by the Chinese.

Relations between Merkel and Beijing were not always this cordial. In 2007, Chinese leaders were furious when Merkel received the Dalai Lama in Berlin, a clear show of support for oppressed Tibet. Some in China also had high hopes for Merkel, and not just among dissidents. There are many in both the Communist Party and the Beijing government who hope to see democratic reforms in China. Moral support from the West is essential.

Yet with each visit to China, Merkel's soft-spoken approach becomes even softer. During her last visit in the spring, Chinese authorities prevented a critical lawyer from attending her reception at the German Embassy. Later, Merkel's wish to visit the offices of a relatively open newspaper in southern China went unfulfilled. In neither case did she complain publicly.

Merkel, in fact, seems to have become almost completely domesticated by the economic gains made by the Asian superpower. She still, of course, addresses points of bilateral contention -- during a press conference with her host Premier Wen Jiabao she requested that German press correspondents be treated better following repeated incidents of hassling. Beyond that, however, Merkel appeared overly considerate of a single-party dictatorship that pays little mind to human rights, neither at home in China nor elsewhere in the world.

The chancellor, for example, addressed Beijing's scandalous approach to the ongoing crisis in Syria only behind closed doors. Yet China, together with Russia, has prevented the United Nations Security Council from taking strong measures against Syrian autocrat Bashar Assad, even as he continues to torture and slaughter his own people. She could have taken an example from Egyptian President Mohammed Mursi, who blasted Iran for supporting the Syrian regime during the recent Summit of the Non-Aligned Movement in Tehran. Instead, Merkel seemed to think it was enough of a concession that future party head Xi Jinping did not explicitly mention Russia during discussions on Syria. In any case, the chancellor did not offer any critique of China's stance on Syria in public.

The Chinese-German relationship has long been characterized by both countries being able to openly speak about any topic, Merkel emphasized during a reception in the walled-off garden of the German Embassy in Beijing. She proudly made mention of the many dialogue rounds between the two countries -- there have been over 50 such chats already.

China and Germany also lead a so-called dialogue on the topic of human rights. But nothing has come of it. With the party congress approaching this autumn, communist leaders are showing even less mercy then usual in pursuing those who would dare to voice opposition. Recently, several human rights activists in Guizhou simply disappeared. Coincidentally, the southwestern province of Guizhou is also where German and Chinese experts held a session of their human rights dialogue last year. In Chinese, the dialogue round is called "Zhongde Renquan Duihua," but a search for information about the discussions in Sina Weibo -- a Chinese Twitter clone -- turns up only the following message: "In adherence with relevant laws, resolutions and policies, parts of the search results will not be displayed."

Merkel's focus on economics over human rights has garnered her enthusiastic praise from the Chinese regime. "Merkel once took the lead among European leaders in meeting the Dalai Lama," writes the Global Times, a state-controlled party rag. But now, "Germany has the ability to lead a more independent diplomacy in global politics. It should not bury itself in old Europe."

It is indeed a new Europe which was on display during Merkel's visit to Beijing: an unsettled Europe which, due to the Continent's ongoing financial difficulties, is increasingly lacking the confidence to admonish the newly rich Asian superpower on democratic deficits.

It has become a Europe which risks the ridicule of courageous Chinese like Ai Wei Wei. When the artist learned that Merkel's delegation had signed contracts worth billions of euros with their Chinese hosts, he sent out a tweet referring to the state demands for back taxes from his studio and asked: "Does she know that there is plenty of money on hand?"