One might think that Israeli Prime Minister Benjamin Netanyahu's Wednesday visit to Berlin could provide for some fireworks. He has come under significant criticism from the European Union for Israel's announcement last Friday that it would build 3,000 new settler homes in the occupied West Bank and East Jerusalem. Britain and France denied reports on Monday that they were considering recalling their ambassadors from Israel, though both nations, in addition to Sweden, did vent their anger by summoning the Israeli ambassadors to voice their concerns.

On Tuesday, cooler heads seem to be prevailing. British Foreign Secretary William Hague ruled out the possibility of European sanctions on Israel. "I don't think there is enthusiasm around the European Union … about economic sanctions in Europe on Israel," he said. "I don't believe there would be anywhere near a consensus nor is that our approach." France too has indicated that it would not pursue sanctions.

Furthermore, despite Merkel's own warning on the settlement construction plan -- her spokesman said on Monday that the chancellor was "extremely concerned" -- it seems more likely that the experienced stateswoman would chide Netanyahu in private rather than openly.

Still, anger is widespread in Europe at the Israeli plan, announced shortly after the United Nations voted last week to grant the Palestinians "non-member observer status," essentially recognizing a state of Palestine. In addition to the settlement program, Israel also announced it would withhold more than $100 million in tax revenue due the Palestinians this month in response.

The Palestinians, too, are seeking to use their newfound status to exert pressure on Israel to halt the settlement expansion plan. Having been granted UN observer status, the Palestinians now have access to the International Criminal Court -- and on Tuesday they threatened to pursue war crimes charges against Israel should the construction go ahead.

Europe, too, has not completely backed away from applying pressure on Israel. Hague said on Tuesday that the focus remains on bringing the two sides back to the negotiating table. But, he added, "if there is no reversal of the decision that has been announced, we will want to consider what further steps European countries should take."

German commentators take a closer look at the brewing conflict on Tuesday.

"One can only encourage the chancellor to use Netanyahu's planned construction of settlements in the West Bank as an opportunity to take the hardliner to task. Because what Netanyahu is planning makes a two-state solution between the Israelis and Palestinians impossible."

"The construction of settlements has long been the source of discord in the Middle East conflict. But Netanyahu wants more. … Clearly Netanyahu doesn't want a Palestinian state. Even if Berlin, Paris and London pull their ambassadors out together, as long has he has the fundamental support of the US for his course of action, he won't be dissuaded from it. But it would be fatal if the Palestinians -- and, indirectly, the Arab states -- were to turn away from Germany and Europe in disappointment."

"Anyone who gives up on the Palestinian goal of an independent state is arguing against European interests. Of course, a German chancellor must choose her words carefully, given the background of Nazi history. But it is exactly this history that obligates Germany to criticize the repressive measures taken by a government like Netanyahu's."

"Netanyahu wants to punish the Palestinians because President Mahmoud Abbas applied for 'non-member observer state' status at the United Nations…. But Israel's settlements on Palestinian land are a violation of international law, against which the Palestinians could take action within the framework of the United Nations. With his approach, Netanyahu isn't just awaking the suspicion that he is not interested in resuming peace negotiations. Rather, his government is creating facts on the ground indicating a creeping annexation of the West Bank. The prime minister is provoking both the Palestinians and the international community. A number of European capitals called in Israeli ambassadors to voice concern."

"If the international community wants to prevent the door to peace from closing completely, they should try to persuade Netanyahu to change his strategy from punishment to negotiation."

"This is typical of the government of Benjamin Netanyahu, but it's not clever. Revenge is never a good counselor -- and in the end the damage to Israel could be greater than to the Palestinians. The sharp reactions from Washington as well as London and Paris and Berlin show that Israel has gone too far."

"Sure, the government in Jerusalem has long since gotten used to protests from all over the world against every new settler home it builds. Even though international law forbids the settlement of the Jewish population on Palestinian land occupied since 1967, around half a million Israelis live there now. Breaking the law has long since become routine -- and has even become a ritual with which every Palestinian transgression is punished. But this time, Israel hasn't just punished the Palestinians -- it has defied the whole world."

"Of the 193 UN member states, only eight voted together with Israel against elevating the status of the Palestinians. That very clearly shows the growing isolation of the Jewish state. Psychologically, the fact that Israel should dare to show the global community the finger after such a vote can probably only be explained as a mixture of defiance and megalomania."

"It's up to Israel's friends to show Netanyahu where the limits lie. Protests alone will evaporate -- nothing less than the withdrawal of the announced plan is warranted now. If Netanyahu isn't prepared to do that, he and his voters should know that he risks losing the support of the last remaining allies. Angela Merkel will have the opportunity to convey this to the Israeli premier at their dinner on Wednesday. She should do that as clearly as possible in the interest of Germany and Israel."

"The announcement of plans to build 3,000 new homes in the particularly delicate 'E1' area east of Jerusalem is another kind of punishment for the Palestinians, and is likely to lead to long-term international isolation of Israel. The housing plans would essentially divide the West Bank into two halves and largely cut off the Palestinians from East Jerusalem, which they want to make the capital of their future state."

"The German government didn't go as far as France, the UK or Sweden, who all summoned their Israeli ambassadors, marking a clear diplomatic escalation. But Berlin did speak -- even just before the German-Israeli government consultations in Berlin -- of a 'negative message' by which 'Israel is … undermining confidence in its readiness to negotiate.' When have we last heard such tones from the German government directed at their Israeli partners?"

"Israel should acknowledge that the international community wants to find a two-state solution in the Middle East to finally put an end to the long-lasting conflict. The question is no longer whether, but how that will be accomplished." 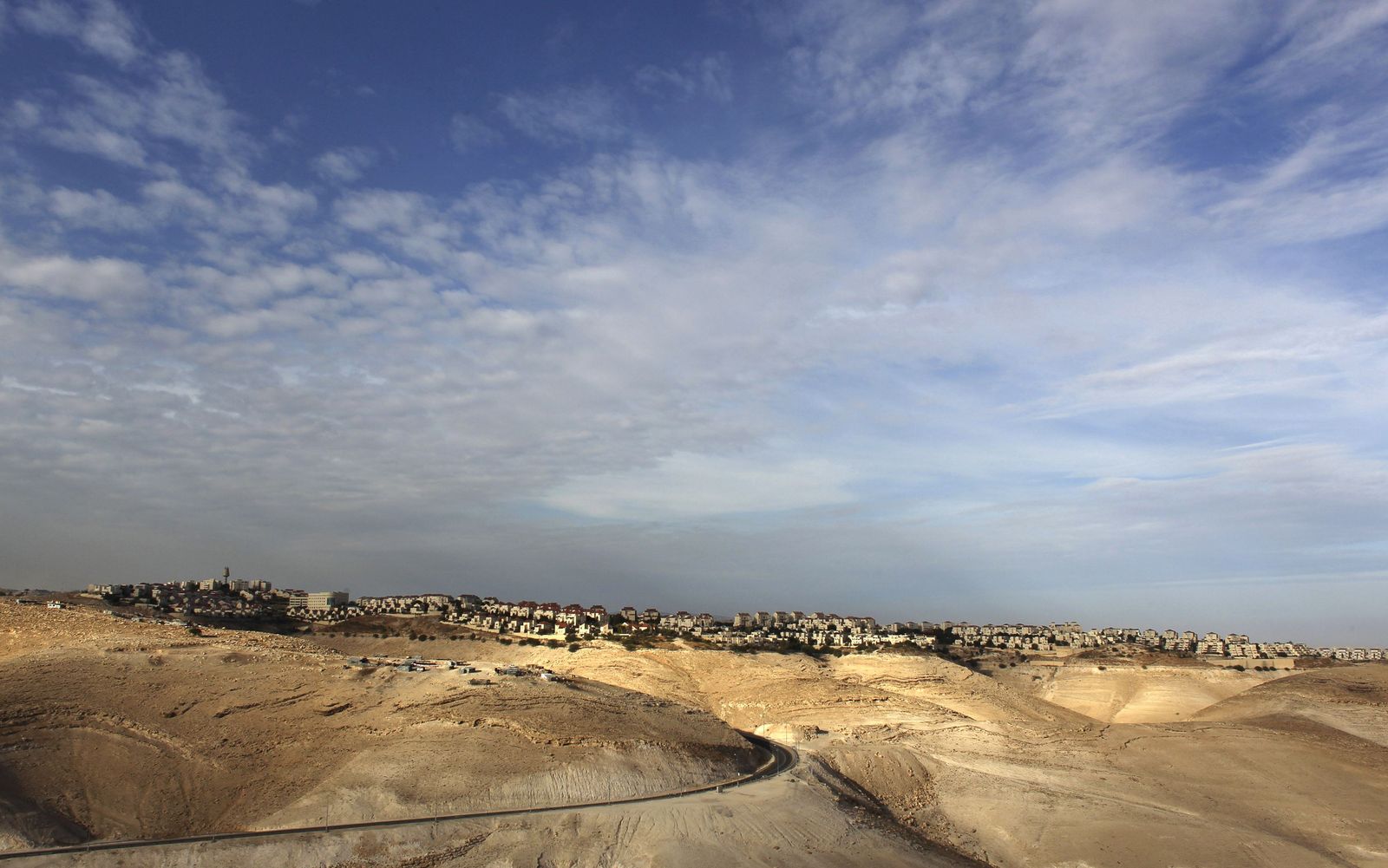 A view of the West Bank settlement of Ma'ale Adumim, near where Israel is planning to expand settlement construction.