Republican Party faithful have turned out in Tampa this week to cheer on their presidential and vice presidential choices for the Nov. 6 national election. Wisconsin Rep. Paul Ryan made his plea on Wednesday night. When former Massachusetts governor Mitt Romney takes the stage Thursday night he will make his own attempt to win over voters in a nationally televised speech.

The official convention theme is "We Believe in America," and the gathering has taken aim at President Barack Obama's handling of the nation's economy. The pair's fiscally conservative policies call for lowering corporate and personal tax rates, eliminating several tax loopholes and rules out tax increases. They have called for cutting government spending on social transfers and for slimming down government regulation, while maintaining defense spending.

Romney has also called for a repeal of Obama's national health care law. In addition the ticket takes a much tougher stance on illegal immigration than both the current president and his Republican predecessor George W. Bush.

Still, for all their focus on policy, the convention has been overshadowed by social issues, particularly the Republican stance on abortion. On the eve of the gathering, Missouri Rep. Todd Akin caused a stir when he intimated that women have ways of not getting pregnant in cases of "legitimate rape" while defending his opposition to abortion in all cases. That blanket rejection of all abortion is also a view held by Romney's running-mate Ryan.

The party's economic and social policies, argue German newspapers on Thursday, are sharply dividing the country and will make it tough for the Romney/Ryan ticket to appeal to minority and women voters, who overwhelmingly supported Obama four years ago.

"The Romney/Ryan duo isn't doing especially well with female voters. That is Romney's biggest problem, alongside is his low likeability ratings. His message, which is focused on boosting savings by cutting social services and boosting economic growth, comes off as cold and too closely tailored to white men."

"President Barack Obama is well ahead with women, blacks and the fast growing bloc of Hispanics. His success among Hispanics has to do with the harsh tone Republicans adopted against illegal immigrants amid the economic crisis.... In a country where the white's share of the population is declining -- this year the percentage of white newborns fell to under 50 percent of the total for the first time -- policies geared towards white men will no longer win elections…. That is why, despite catastrophic economic data, it will be hard for Mitt Romney to get ahead of Barack Obama."

"American political party conventions are theater. They are political revivals used to stoke the party base, agitate and scout for talent."

"This year the election is effectively becoming a battle with neither side giving up any ground.... In the coming months Romney will pound Obama with the undeniably bad economic numbers. He will fully exploit the economy to say that the president doesn't deserve a second term. In turn the cool incumbent, who once sought to take the poison out of politics, will brand the Republicans as a threat to America. He will paint them as extremists and culture warriors who want to throw blacks, Latinos and women -- the same groups which belong to the Obama coalition -- back into a dark past. Current polls show that the election on Nov. 6 will be tight, with a slight advantage for Obama. Only one thing is certain: Obama won't have as easy a time of it as he did in 2008. That is apparent from the aggressiveness of his campaign."

"Polarization is always a part of political elections. However the campaign dynamic seen in the US in the last few months -- reaching its first, sad high point with the coronation of the Republican leadership pair -- is reaching a whole new dimension…. The ways in which Romney's men try to silence critics in his own camp is alarming and calls up an association with totalitarian systems."

"When it comes to the question of who will be the next President there are only friends or enemies.... Yes, the economic data will be an important factor. But if Obama's challengers are successful in furthering polarization, anything is possible. But it is a dangerous weapon."

Business daily Handelsblatt says that Romney's views on financial policy would be a negative development for the US Federal Reserve:

"Mitt Romney, who was today crowned as the Republican presidential candidate, openly says that if he makes it to the White House he will throw Federal Reserve head Ben Bernanke out of office. Just as openly he says that he wants to have someone who shares his economic vision in Bernanke's place.... Even though Romney cannot throw Bernanke out of office, he can choose not to re-nominate him at the end of his term in 2014."

"But should Romney win, he could only nominate a Fed chair who is acceptable to the Tea Party. Such a person would strictly refuse to lend dollars to foreign central banks, which was one of the measures Bernanke used to deescalate the euro crisis. An Obama win would only be a slight improvement for Bernanke's situation, because the president is no less of a populist than his opponent. Romney is making it easier for him to exert more influence on the Fed were he reelected."

"One doesn't have to agree with everything that Bernanke has done in the past few years to find this development concerning. In the end, it implies that politics will take over monetary policy. A money printing central bank should be treated with caution, but having politicians take over money printing is the quickest path to destruction." 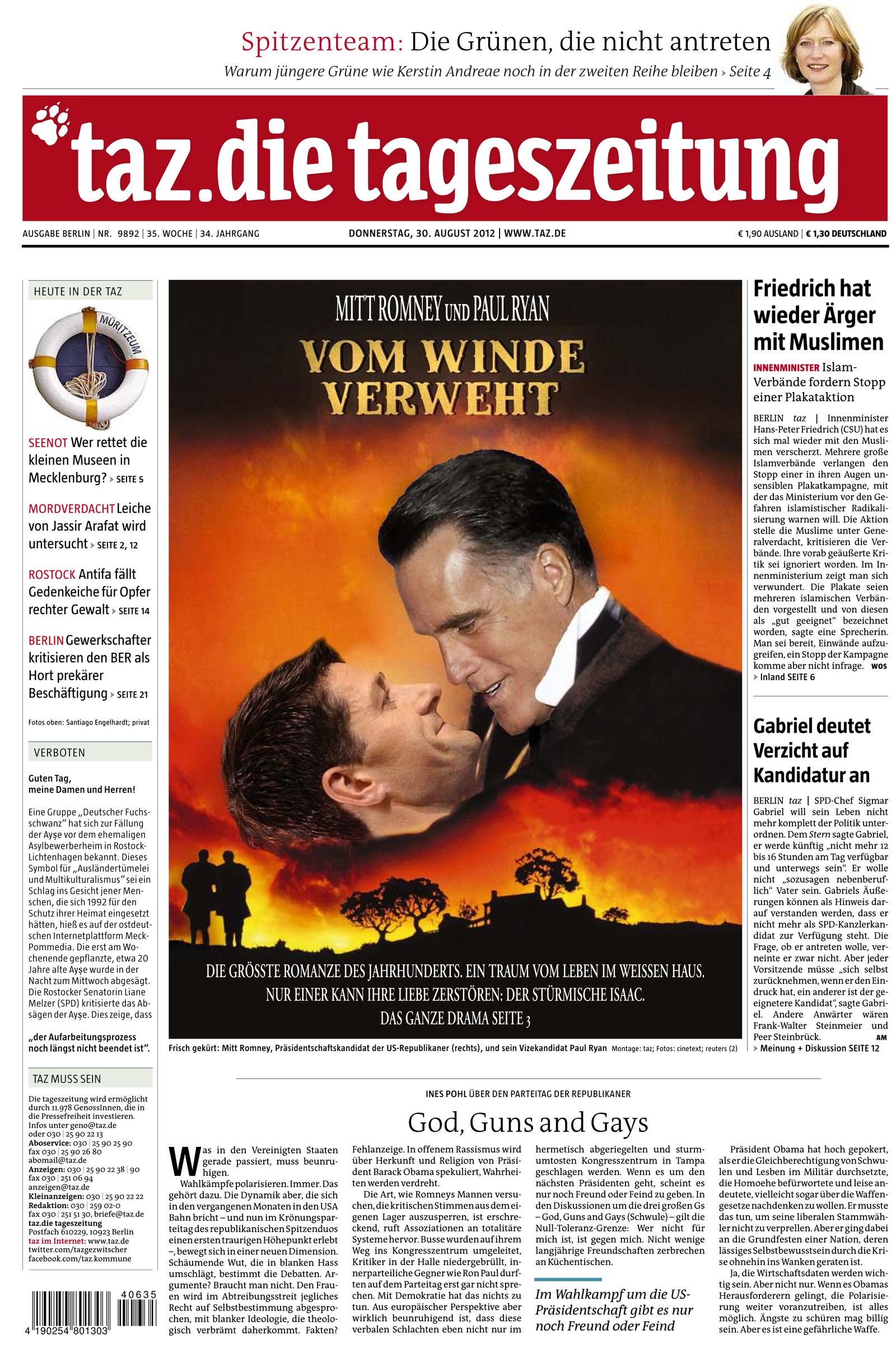 The front page of the left leaning Die Tageszeitung took aim at the Romney/Ryan Republican ticket on Thursday.