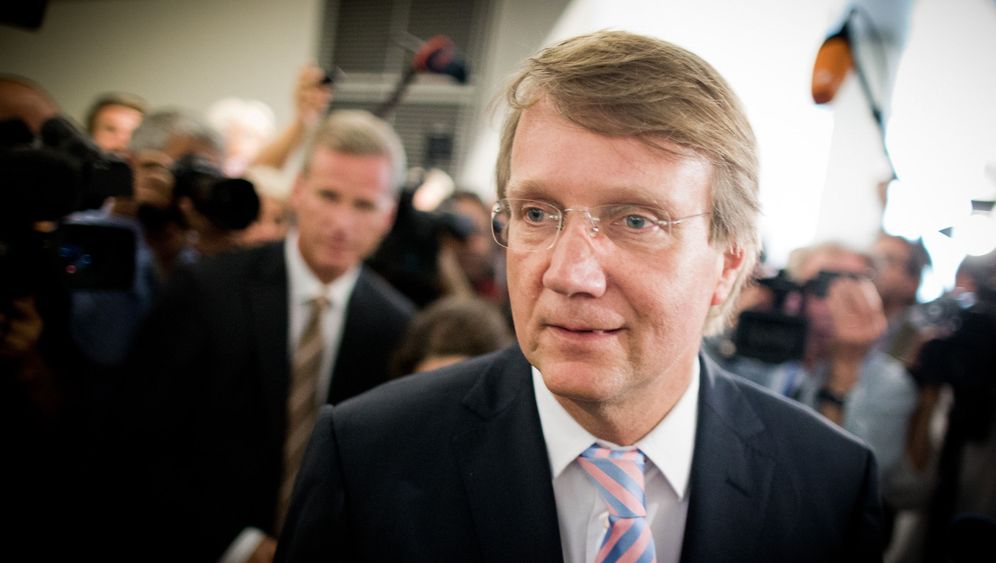 It was an attempt to take the offensive in the seventh week since documents leaked by whistleblower Edward Snowden revealed the extent of the United States' global data surveillance operations -- as well as the cooperation of German intelligence services.

For a long time, Merkel tried to ride out the scandal surrounding the massive data collection operations of the American National Security Agency. Whenever she addressed the issue, she either spoke in vague terms ("there must always be a balance between freedom and security"), or she simply said that she could not seriously be expected to be involved in everything ("It isn't my job to delve into the details of Prism.")

But early last week, Merkel and her team decided on a change of strategy. So far, the scandal hasn't hurt her party, the center-right Christian Democratic Union (CDU), in its campaign for September's national elections. In fact, recent polls even showed the CDU gaining a little ground. Nevertheless, the case has the potential to harm Merkel's image as a prudent leader. In the past, the chancellor has consistently emphasized that she keeps herself informed on current issues, even down to the details. But then Merkel declined to address the particulars of a surveillance program that half the country was talking about. Suddenly she was being described as a self-righteous politician with a couldn't-care-less attitude.

This was one of the reasons Pofalla, who is also the senior Chancellery official tasked with coordinating Germany's intelligence activities, decided to address the sensitive subject. Last Monday, he volunteered to answer questions before the Parliamentary Control Panel, the body in German parliament, the Bundestag, assigned to keep tabs on the activities of the country's intelligence agencies. From the standpoint of Merkel's team, this has two advantages. On the one hand, it enabled Pofalla to avoid the embarrassing situation of being quoted by members of the leading opposition party, the center-left Social Democratic Party (SPD), in front of the committee. On the other hand, he is making himself the target for attacks from the opposition, taking the chancellor out of the line of fire.

But can the strategy succeed? Documents obtained by whistleblower Snowden, which SPIEGEL was able to view, raise a host of new questions. And during his appearance before the control committee, Pofalla used a trick that PR professionals like to use in tight situations: They deny accusations that no one has made, leaving the truly sensitive questions unanswered.

The heads of Germany's major intelligence services, Gerhard Schindler of the Bundesnachrichtendienst (BND), Germany's foreign intelligence agency, and Hans-Georg Maassen of the Federal Office for the Protection of the Constitution, its domestic counterpart, had already used the same trick before. A week ago, they responded to a SPIEGEL story in the mass-circulation Bild am Sonntag weekly, even though the SPIEGEL issue wasn't even on newsstands yet at that point.

It was an audacious move, because SPIEGEL had, of course, already given the two intelligence services the opportunities to respond to its inquiries. For instance, SPIEGEL wanted to know whether the two agencies use XKeyscore, US spy software that, according to documents from the Snowden archive, allow for extensive surveillance of digital data traffic.

Both agencies, as well as the federal government, were unwilling to talk to SPIEGEL about the issue. The Federal Office for the Protection of the Constitution only issued a statement saying that it would not comment "on indiscretions" and "supposed details" of intelligence activities.

But when speaking to Bild am Sonntag, Federal Office for the Protection of the Constitution President Maaßen suddenly became relatively talkative, even admitting that his agency does use XKeyscore, albeit only for test purposes. Neither does BND President Schindler deny the use of the software.

Then the intelligence chiefs went on the counteroffensive. "The transfer of millions of pieces of data a month from Germany to the NSA through the BND does not take place," Schindler said.

But that wasn't what SPIEGEL had reported. It was reported that the German agencies use a highly effective NSA surveillance software, and that this was not disclosed to the lawmakers on the Parliamentary Control Panel, even though the committee had already met four times since the surveillance scandal broke.

Pofalla resorted to a similar trick in another case. SPIEGEL had written that the BND had advocated a looser interpretation of Germany's strict data privacy laws, as stated in the NSA documents ("to relax interpretation of the privacy laws"). After appearing before the panel on Thursday, Pofalla declared that the "unbelievable accusations" that had been leveled against the German intelligence agencies had now been clearly refuted. "The German intelligence services operate in accordance with law and order," he said. But SPIEGEL hadn't even claimed that BND President Schindler was violating current law.

In the hearing before the control panel, the BND chief also confirmed that, from the standpoint of his agency, data privacy laws should be interpreted more loosely, and that this was also what he had said in the United States. But, he denied, in the form of an "official statement," wanting to soften German data privacy laws across the board.

On Thursday, Pofalla's line of defense was clear, namely that the German intelligence services are blameless, at least legally. "Data privacy laws are adhered to 100 percent of the time," he said.

If that's the case, the question arises as to how millions of pieces of communications data entered the NSA databases. But the issue was avoided on Thursday, because answering the question requires getting answers from the US government first.

But that didn't prevent the Chancellery chief from sowing doubts as to NSA surveillance activities. It remained to seen "whether and, if so, to what extent we in Germany" are affected, he said. Interior Minister Hans-Peter Friedrich had made similar comments when he spoke of unconfirmed reports. And when speaking to journalists Hans-Peter Uhl, a politician with the CDU's Bavarian sister party, the Christian Social Union (CSU), even went so far as to liken the scandal to the fake Hitler diaries the newsmagazine Stern published 30 years ago.

It was a bold move. More than seven weeks have passed since the first documents from the Snowden archive were published. At no point did the NSA question the authenticity of the documents. On the contrary, it sharply criticized the publication of materials it had classified as "top secret."

The same applies to reports on its Boundless Informant program. According to the documents on the program, the NSA had access to about 500 million data connections from Germany in December 2012 alone.

Because of the current debate, SPIEGEL decided to publish the original documents from the Snowden archive that relate to Germany and a few neighboring countries (see photo gallery). The data to which the NSA had access in December are so-called metadata -- or information about which data connections were made and when.

To avert new misunderstandings, the fact that the NSA has access to this metadata doesn't mean that it actually analyzes all of the data sets. But merely the fact that it has access to and stores the data is problematic. Such data storage practices are incompatible with German law.

A category known as "Most Volume," under which two codes, US-987LA and US-987LB, are listed, is especially interesting. These are apparently the codes for the most important data collection methods and data collection sites, known as signals intelligence activity designators, or SIGADs.

Some of these SIGADs are now known. For instance, the often-cited Prism surveillance program, which provided the Americans with access to data from Germany, among other countries, was listed internally under code US-984XN. Two codes on the Germany chart published here are only referred to in general terms. According to the Snowden documents, the NSA also contracts out SIGADs for the technical surveillance activities of so-called "third parties."

New Issues for the Panel

This leads to new, volatile issues for the next two scheduled meetings of the Parliamentary Control Panel. The documents suggest that the NSA lists many countries as "third parties," both Germany and neighboring countries, like the Netherlands, Poland and Austria. However, the heads of the German intelligence agencies have repeatedly insisted that they do not support the Americans' surveillance operations. The question remains as to what the codes US-987LA and US-987B signify.

The opposition, at any rate, is sticking to its guns. "None of what Snowden claims has been disproven," says Steffen Bockhahn, a member of the panel for the Left Party. The SPD also hopes to continue to use the scandal to its advantage. "We will not hold back in the election campaign," says Thomas Oppermann, the parliamentary flood leader of the Social Democrats.

SPD chair Sigmar Gabriel has made clear his frustrations over his party's stalled progress in the campaign. Now he wants to use every opportunity to attack Merkel, even though SPD strategists concede that the surveillance scandal is unlikely to drum up voter support for the party.

This is why a growing number of voices in the SPD are now warning against opening up a new theater of operations in the campaign. "We shouldn't act as if the National Security Agency poses the greatest threat to people in Germany," former Interior Minister Otto Schily told SPIEGEL. "In fact, the greatest threat comes from terrorism and organized crime."

Chancellor Merkel knows that the surveillance scandal will be with her until the day of the election. Officials at the Chancellery are well aware that the subject is hotly debated in the Internet community, creating new hope for the Pirate Party. Chancellery head Pofalla plans to testify before the Parliamentary Control Panel again on Aug. 19. He promised lawmakers last Thursday that the US government would provide answers on the surveillance scandal by then.

So far, however, the Americans haven't even confirmed that US intelligence agencies operating on German soil are in compliance with German law, even through the Foreign Ministry is doing its utmost to obtain such assurances.