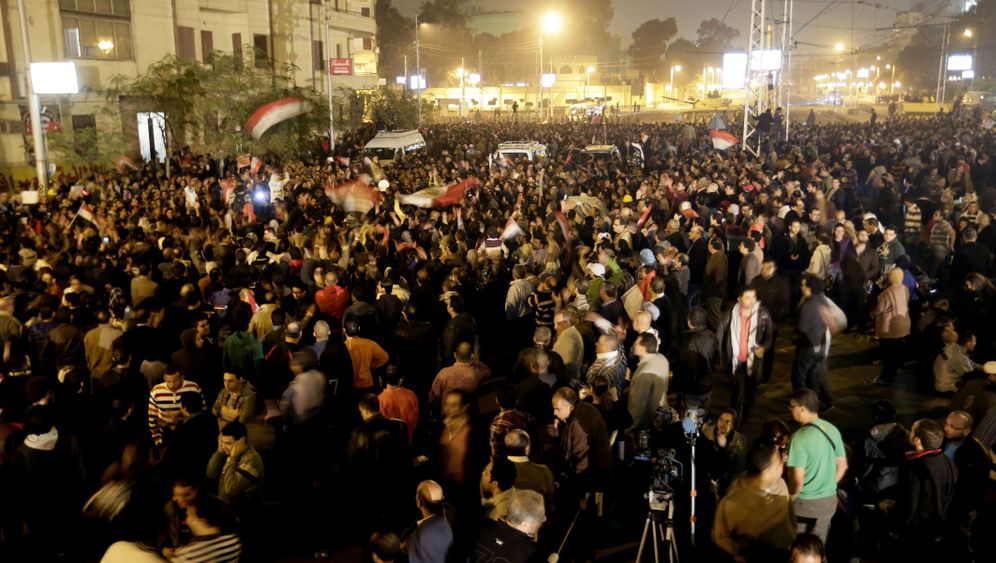 This week Egypt has seen the worst outbreak of violence since the Arab Spring demonstrations that toppled former President Hosni Mubarak's regime two years ago. Six people were killed and hundreds injured when opposition protestors and supporters of President Mohammed Morsi clashed on Wednesday night. And with more demonstrations planned for Friday after midday prayers, there are fears that the rift between the two sides will only deepen.

Despite the unrest, embattled President Morsi stood his ground in a nationally televised address on Thursday night. The president, who is backed by the Islamist Muslim Brotherhood, said he was open to dialogue with the opposition starting on Saturday, but refused to withdraw decrees he issued last month that put his authority beyond judicial review. He also rejected demands that he postpone a Dec. 15 referendum on a draft constitution that would cement several tenants of Islamism into law.

But opposition leaders say that without those concessions they won't agree to talks.

United States President Barack Obama called Morsi on Thursday night to express concern for those who have been injured in the violence. According to a statement issued by the White House, the President made clear that the violence was unacceptable and urged both Morsi and the opposition to take part in a dialogue without preconditions.

But in his television address Morsi angrily defended his actions, saying that he was safeguarding the stability of the country and protecting Egypt's citizens. Opposition leaders, meanwhile, have expressed no interest in Morsi's invitation to talk and protests continued on Friday.

German commentaries on Friday say that with both sides unwilling to back down, the opportunity for reconciliation is dwindling.

"The only thing that Morsi, the Muslim Brotherhood functionary who rose to become head of state, has proven, is his inability to facilitate the integration of Egypt's 85 million people. ... As a result, the inhibitions of the protestors have been lowered, the riots are becoming bloodier, and the demonstrations in front of the Presidential Palace and in Tahrir Square are again costing lives."

"Neither side can be counted on for understanding and both the opposition and the government are taking their fight to the street. The palace security tanks driving through Cairo recall Egypt's third facet of power: the army. If they were to come back, Egypt's entire political experiment will quickly come to an end -- both for the Islamists and the liberals."

"In light of the current polarization between the Islamists and the secular camps, Egypt now finds itself in a deep political crisis. The crisis contributes to the worsening of the country's long-standing and severe economic problems and weakens the role of Egypt in the region."

"As a result, Egypt appears to be condemned to pay a high price for political destruction and the spiritual stagnation of the former dictatorship. The country suffers from the incompetent governance of the Muslim Brotherhood and at the same time the immaturity of the opposition."

"Egypt needs a national, democratic consensus between its political powers instead of constant confrontation. That will only deepen the divide. And Morsi must reconcile with the opposition so that his time in office remains legitimate."

"There is a prevailing notion that implies unbound, undivided and uncontrolled power is justifiable. In countries that for decades have known nothing other than autocracy or dictators, so the argument goes, a direct transition to a democratic, constitutional state is impossible. It's actually even dangerous, because people who have no experience with freedom will misuse it, and the consequences will be chaos and renewed violence. That's why these countries need a well-meaning autocrat that will lead the people with a strong hand and very, very slowly take them down the path towards a new period of democracy and division of powers. That is, at least, Russian President Vladimir Putin's narrative. It sounds good. The reality looks very different, though. That path towards democracy is rarely achieved."

"Morsi ... is an Islamist, but not a holy warrior. Rather, he is a crafty power-hungry politician. As such, he could be prepared to compromise. However that will only happen if he is dealing with adversaries who know what he wants, which is nowhere near the case. The Arab Spring is turning into a hard winter. Political forces in Egypt have not succeeded in winning time for an open process to found a democratic state."

"Violence as a means of political confrontation is escalating and a calming of the situation is not in sight. For both sides the stakes are simply too high. The Muslim Brotherhood does not want to give up the power that they have gained. Supporters of the old regime and secular activists know that for the foreseeable future they will not be able to defeat them at the ballot box. President Morsi's advisors insist on a dialogue without preconditions. The chance of success is low, because neither side is prepared to move away from their maximum demands."

"As long as [Morsi] insists on a dialogue without preconditions and the other side has such specific preconditions, a dialogue will not be possible. Morsi's credibility now rises or falls with whether he can depoliticize the judges and break with the past. To bring about non-partisanship, however, is barely possible in such a heated atmosphere. Confrontations will continue for another round."