Vladimir Putin has barely been back in office as Russian president for four weeks, but he is already flexing his muscles.

This week, the Russian parliament approved a controversial bill which will significantly restrict the right to demonstrate. Under the new law, individuals who take part in unauthorized protests could face maximum penalties of 300,000 rubles (€7,400 or $9,300) or 200 hours of community service, while organizations could face fines of up to 1 million rubles. The fines are a massive increase over the previous penalties.

The State Duma, the lower house of the Russian parliament, approved the bill on Tuesday and was passed in the upper house on Wednesday. In an uncharacteristic sign of defiance, normally docile opposition parties in the State Duma proposed hundreds of amendments to the bill in an attempt to slow down its passage, but the pro-Kremlin United Russia party used its majority to vote down the amendments and approve the bill.

Putin is expected to sign the bill into law by next Tuesday, a public holiday when the opposition plans to hold a major demonstration in Moscow. Critics accused United Russia of curtailing freedoms. One Communist Party politician told the Associated Press that the law would "destroy the social peace and deepen the divide in the society."

The law may have an unintended effect, though. Some observers predicted that it will actually encourage more people to take to the streets, outraged at the attack on their rights.

The bill is a reaction to a series of huge anti-government protests in Russia following December's parliamentary elections, which the opposition claims were rigged. Putin recently spoke out in favor of the new law, saying: "We must shield our people from radical actions."

German commentators take a look at the new law.

"This week, the Duma woke up from its deep sleep. The unbelievable happened -- unbelievable, at least, for Russia. The docile parliamentary opposition fought bitterly against the restrictions to demonstration rights. Representatives staged open rebellion, flooding the agenda with hundreds of amendments and stretching the debate until deep into the night. It was a rearguard action -- their defeat was predictable and some of the methods used were dubious. But it was a lively battle."

"The fact that parliament has now been awakened makes sense. With the scandalous new law, the Kremlin is trying to stem the most recent wave of protests. Not just demonstrations, but any gathering of people can now be punished with draconian penalties. But by fighting the protests on the street, the Kremlin has brought it into the parliament. Instead of silencing his opponents, Putin has now given them a stage."

"Who will still have the courage to oppose Putin on the streets when threatened with financial ruin? The new law is an answer to the large-scale demonstrations that Russia has seen since the parliamentary election in 2011. It is also an expression of the state power's absolute helplessness, because ultimately it shows the fear Russia's leaders have of their own fellow citizens."

"Instead of reacting to the protest movement and ushering in more democracy, Putin is leading his country in the opposite direction. Nothing good can be expected to come from his next four years in office."

In an editorial published in its Wednesday edition, the conservative Frankfurter Allgemeine Zeitung writes:

"The restriction of the right to demonstrate by the Russian parliament represents the essence of Vladimir Putin's rule: the arbitary exercising of power, cloaked in a pretense of legality. While media loyal to the regime have praised, as a sign of liberalism, the fact that the maxium penalties in the original bill were significantly reduced during the law's passage through the parliamentary consulation process, a host of clauses were written into the law which de facto abolish the right to demonstrate."

"It was already the case in the past that the right to demonstrate existed more in theory than in practice, but even that was apparently too dangerous for Putin, after he was forced to witness, in the months before his re-election, just how quickly theory can turn into practice." 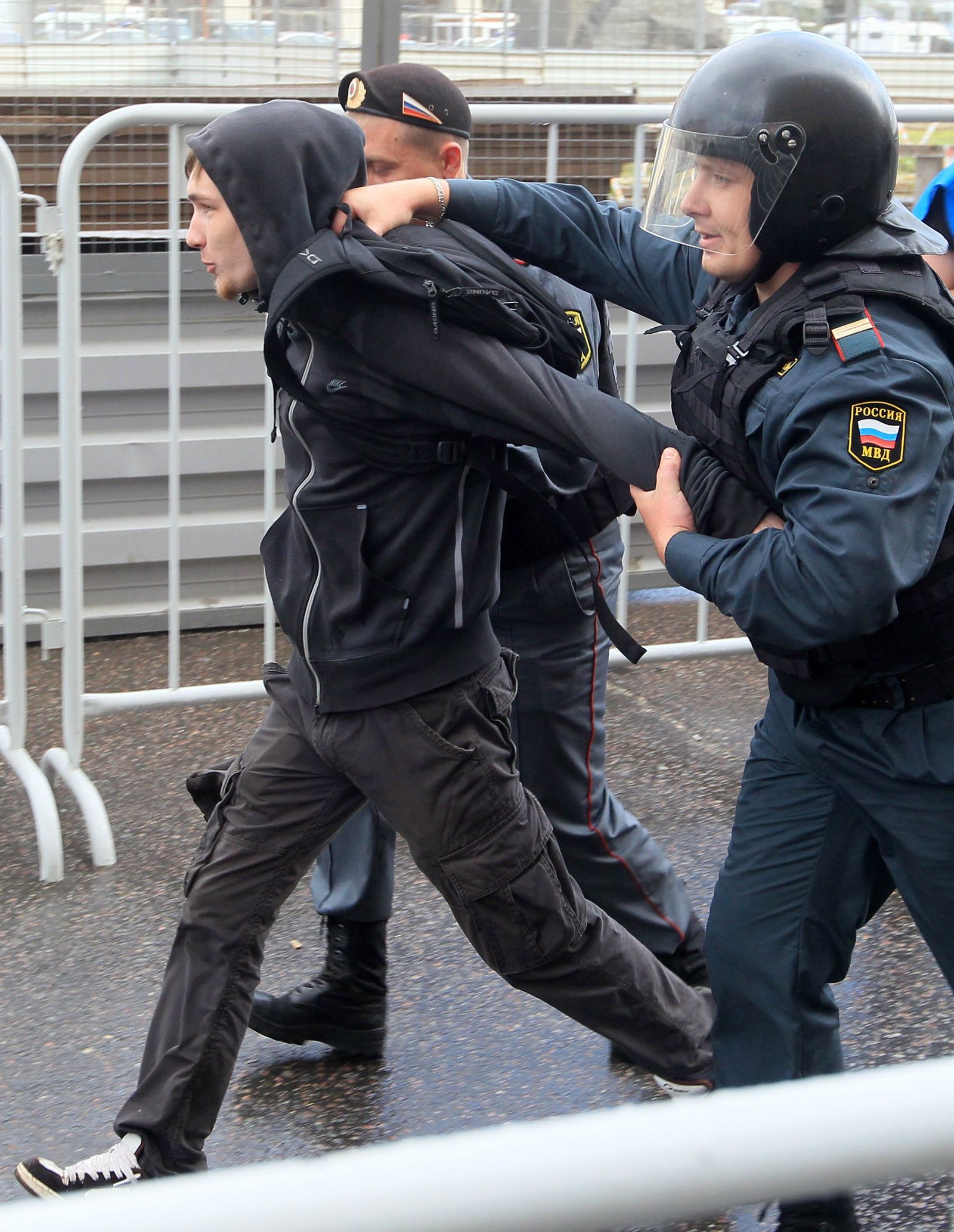 Riot police detain a participant in an unauthorized protest in Moscow on May 31. A new Russian law will restrict the right to demonstrate.