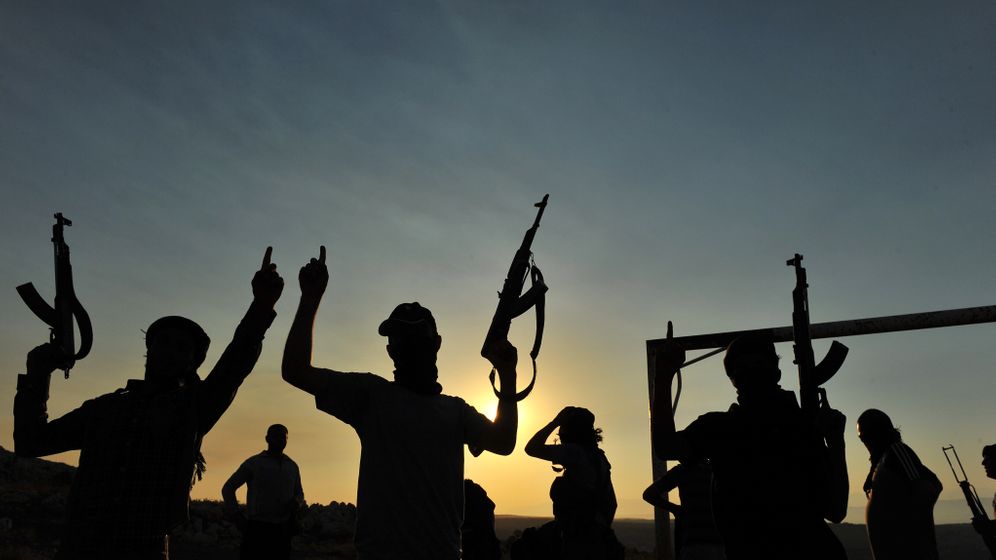 The trail of Ibrahim R. ran cold in March 2013. The young man from the southwestern German town of Pforzheim had already appeared on the radar of the German domestic intelligence agency when he participated in demonstrations with other Salafists in Germany. But then he got on a bus headed for Turkey and disappeared. Authorities suspect he is now fighting in Syria. The police were able to block his first attempt to enter Syria with a group of fellow Muslim extremists. But now they classify him among those who have made their way or are in transit to Syria.

The case of Ibrahim R. is one of many precarious movements being closely followed by German security officials. Though outside the view of the public, the issue has long been treated as a domestic priority. In a SPIEGEL ONLINE interview Thursday, Interior Minister Hans-Peter Friedrich officially confirmed for the first time that there were German "jihadists" in Syria. Friedrich particularly expressed concern about "calls for those Europeans who have been trained in battle (in Syria) to return home and pursue jihad."

The findings of German officials mirror the general picture of international intelligence agencies, which holds that Muslim extremists are streaming into Syria more rapidly than anywhere else. Since the revolution began there in March 2011, the country has become a virtual training camp for al-Qaida sympathizers. There, they learn how to use weapons and explosives -- and they forge new, dangerous ties with likeminded individuals from around the world.

German officials believe that 20 German nationals are currently fighting in Syria. Some have reportedly even taken their wives there and live directly on the frontlines. In July 2012, the US State Department estimated that somewhere between a few dozen and 100 foreign jihadist fighters were active in Syria. But a recently published study posits that this figure has since grown to between 2,000 and 5,500, and the European Union's top counter-terrorism officials have stated that at least 500 of those come from EU countries. Of these, some are reportedly immigrants holding European passports, while others are native-European converts to Islam.

For months now, Germany-based preachers of Salafism, an ultra-conservative branch of Islam, have been championing the cause of Syria more than any other. They appear at regularly held large benefit events, where they call for donations for humanitarian relief. At the same time, the preachers leave no doubt that they are not opposed to Muslims who want to do more than just donate money. "Our brothers and sisters in Islam are being killed around the world because they are Muslims. Our brothers and sisters in Syria need our support," said well-known Salafist preacher Ibrahim Abou-Nagie in December. For him, the civil war in Syria is part of a global war between religions.

Another star of the German Salafist scene may have already set off for Syria: the jihad-rapper Denis Cuspert, better known among his cohorts as Deso Dogg. After fleeing to Syria out of fear that he would be arrested, Cuspert is rumored to have made repeated attempts to enter Syria along with other fellow Muslims. Officials cannot confirm whether Cuspert is already fighting on the Syria front. A few months ago, rumors circulated that he had been killed during a firefight in Aleppo. Since then, however, he has apparently re-established contact with people close to him in Germany.

German officials are particularly worried about Deso Dogg's abilities to serve as a propaganda mouthpiece. Analysts say a video he made before going to the front, in which he called on Muslims to go and fight in Syria, prompted some hesitant members of his scene back home to follow his example. If he soon starts disseminating videos from Syria itself, officials are concerned the material could have an even stronger effect.

International jihadists took a rather long time before joining the uprising in Syria. Indeed, it was only in February 2012, almost a year after the revolt began, that leading al-Qaida figures publicly mentioned it. That was when al-Qaida head Ayman al-Zawahiri said in a video: "I call on every Muslim to help his brothers in Syria as much as he can." In March 2013 came the first German-language summons to Syria. Hajan M., who lived in the central German city of Kassel for several years, called on Germans in a video to come and join the "holy war" in Syria.

Easier to Get to Syria than Waziristan

German security officials have been seriously concerned about Syria's ability to attract German jihadists for months. In late 2012, Gerhard Schindler, head of Germany's BND foreign intelligence service, told a small group of senior security officials in Berlin that joining the rebellion against Syrian dictator Bashar Assad and, even more so, the brigades of the extremist Muslim Al-Nusra Front had become much more attractive for volunteer fighters than traveling to the austere mountainous region straddling the border of Afghanistan and Pakistan. The Al-Nusra Front is an offshoot of the Iraqi branch of al-Qaida, and the US State Department says the group is also in regular contact with top al-Qaida leaders in Pakistan.

One of the main reasons that European and German jihadists are making their way to Syria is simple: The journey to this front is considerably easier than traveling to Waziristan. Many of the people headed for terrorist camps of the Taliban or other militant groups in Pakistan and Afghanistan have been held up in Iran or other neighboring countries. But volunteer fighters in Europe can in most cases fly to Turkey without a visa. From the south of the country, it is only a short distance to Syria, and the border is easy to cross.

Given the large number of veteran extremists fighters already present in the region, German officials now believe that jihadists from Germany are not playing a leading role in Syria. They do, however, note that at least a portion of the funds the rebels are using to arm and equip themselves is coming from Germany. Police are aware, for example, of the frequent trips that Berlin native Reda Seyam has been making to the front. Each time, he is reportedly carrying in his luggage several thousand euros in donated money collected from people in radical circles across Germany.

What has German analysts most worried are the experience that these fighters are gaining in Syria, as well the contacts they are making there. As has been the case with Afghanistan and Pakistan, they fear that these guest warriors -- particularly given the usefulness of their passports for all terrorist plans -- will return to their home or adopted countries in Europe with concrete terror missions. "There is a host of disillusioned people," warned Hans-Georg Maassen, the head of the Federal Office for the Protection of the Constitution, Germany's domestic intelligence agency, a few weeks ago. "We have to particularly keep an eye on these people since they could possibly be returning with weapons know-how." 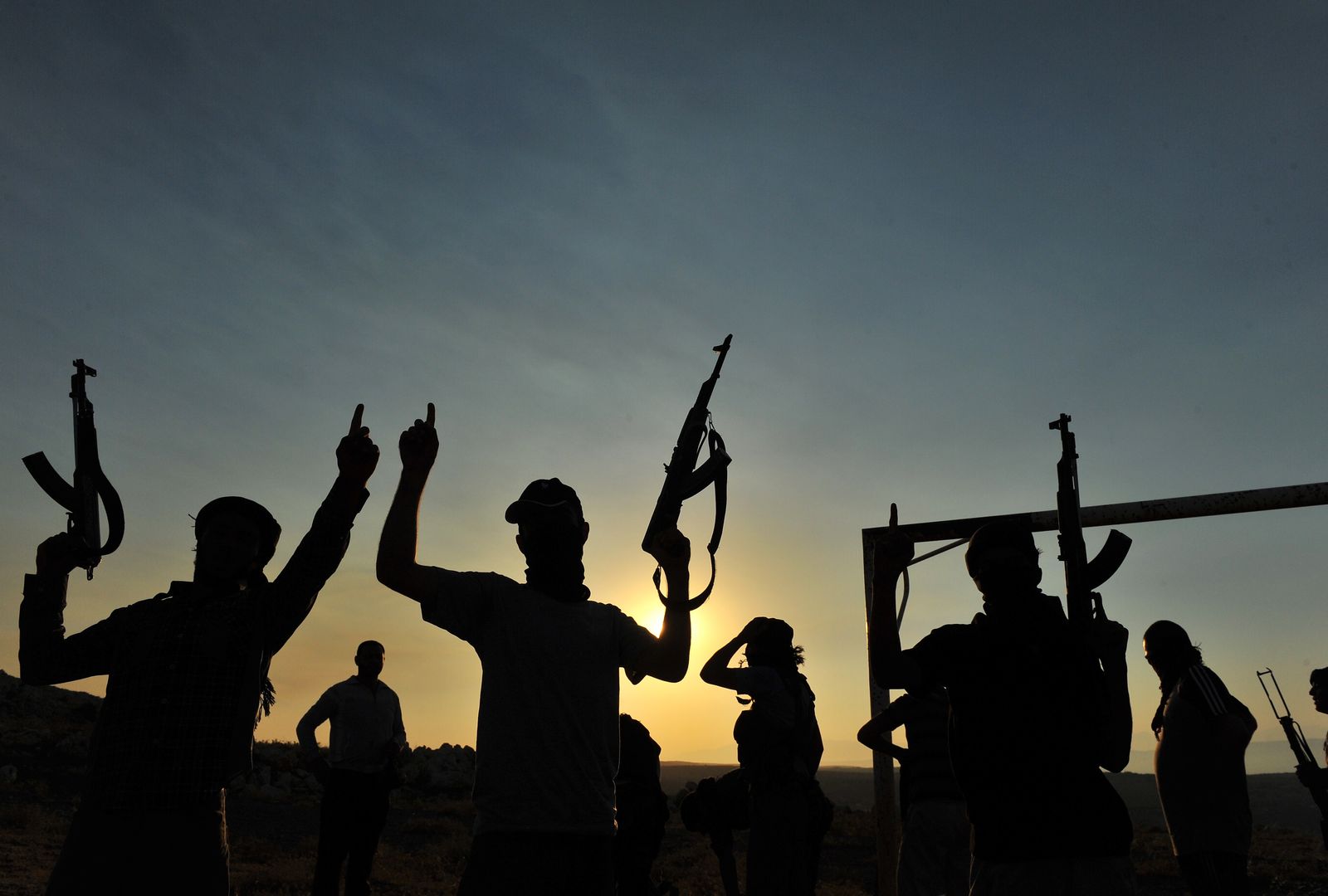 Members of a jihadist group near Aleppo: The civil war in Syria is attracting more and more fighters from abroad.