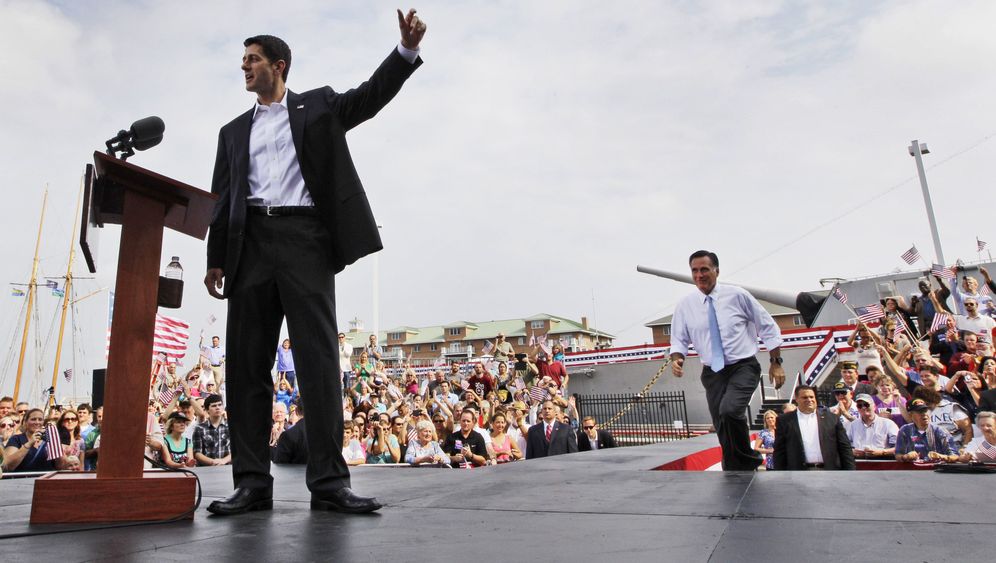 On Saturday, US Republican presidential candidate Mitt Romney announced Paul Ryan as his running mate. The 42-year-old conservative made a name for himself in Congress as an austerity-minded politician who wants to radically trim social services for the old and poor people.

Romney is trailing incumbent President Barack Obama in opinion polls, and his choice of Ryan as vice president if he is elected suggests he will focus his campaign on the United States' excessively high national deficit.

First voted into Congress at the age of 28 in 1998, Ryan is considered a rising star in the Republican Party. The politician is fond of saying that his chief political goal is to hand off a debt-free country to the next generation. In 2011, Ryan generated massive controversy in the United States when he presented the Republican budget plan and called it "The Path of Prosperity". In it, the congressman demanded dramatic changes to the American social system: He called for major cuts and partial privatization for public health care programs for the poor and senior citizens -- moves massively criticized by the Democrats, including Obama, who described Ryan's plan as "nothing but thinly veiled Social Darwinism."

It would be no less than a radical restructuring of America -- a prospect that terrifies Democrats but sits well with a Republican base that has shifted to the right in recent years, including the Tea Party. Ryan is their hero. He's a man who has adopted the language of the rebel, he's a father with three kids, he's down to earth and he's from Wisconsin in the Midwest.

Despite his popularity among Republicans, newspaper editorialists in Germany argued on Monday that choosing Ryan could backfire on the Republican presidential candidate. Many believe he is a more solid choice for the Republicans than Sarah Palin was back in 2008, but they similarly conclude that he may drive swing voters to the center and help secure Obama's re-election in November.

"By choosing conservative chief ideologist Ryan, Romney has finally accepted that far more is at play on Nov. 6 that just a referendum on Obama's (admittedly modest) performance. This election will actually be a vote on two fundamentally different visions of America's domestic composition."

"The country will experience a bloody duel that will pit Obama, a self-proclaimed defender of the middle class, against Romney, a staunch believer in the markets and archetypal capitalist. It's the kind of sharp contrast that the Republican candidate has so far tried to avoid. Romney wanted to win by denouncing Obama's weaknesses and miserably high unemployment levels. But he avoided showing clear political platforms or nuances. That's why, to many in his party, he had come to be seen recently as a figure … who stood for nothing."

"Now Romney is borrowing a political face: Paul Ryan, a 42-year-old spitfire of the right, who will sharpen Romney's profile and push the candidate to the right. That may please the party base, but it also entails risks. As a junior partner, Ryan fits in almost absurdly well with the caricature of Romney the Democrats have been painting for weeks now -- namely that he is a cold, money-grubbing multimillionaire and would have to transfer nary a cent to Washington in taxes if his pupil Ryan actually got the opportunity to implement his radical fiscal concepts."

"Ryan is a serious deputy -- one who could lend more clout and substance to his boss Romney. He is definitely better than Sarah Palin, who damaged McCain in 2008 with her shrill ranting. But when they go to vote on Nov. 6, it isn't a deputy or a junior partner who they are giving their checkmark to; they are electing a president. And in this race, Obama is clearly ahead of Romney -- at least for now."

"The Republican Romney has now chosen Congressman Ryan, a 'super hawk' on fiscal issues. By doing so, Romney is putting all his eggs in one basket: budget consolidation and supply-side economics. Ryan is popular with the party base, but his ability to attract swing voters is likely to be limited. Although they may be dissatisfied with the current situation, it is unlikely that a radical restructuring of the social system will warm their hearts, either. Obama is likely to see Ryan's selection as an invitation to further demonize Romney."

Risky, surprising and courageous: The choice of Paul Ryan as Mitt Romney's vice presidential candidate is all of these things. But it is also an act of desperation. He is currently trailing significantly behind Obama in the polls and his chances of winning the election this fall might have been better if he had gone with a certain ticket. But with his decision, Romney is instead trying to do what John McCain did four years ago with his choice of Sarah Palin. He's trying to change the dynamic of the election campaign. Like Palin, governor of Alaska at the time, 42-year-old Paul Ryan is a politician who divides people. Even today, Palin is either revered or hated. Ryan isn't much different: To some, he is a right-wing conservative fiscal ideologist. To others he is a man courageously fighting against the debtor nation."

"Romney's strategic calculus is clear. He, himself a procrastinator, dawdler and notorious opportunitist, is viewed by the conservative wing of his party as being too liberal. During his time as governor of Massachusetts, he passed introduced a health care reform there that looks a lot like Obama's, and Romney lost credibility with the Republican Party basis. And that has changed little despite his claims that he will roll back Obama's health care reform if he is elected. With Ryan, who has the support of the Tea Party, he is hoping to at least offset this deficit. This is party because it is hard to believe that Ryan would risk wasting political capital by agreeing to weak compromises."

"More than anything else, Ryan is a radical ideologue who has never changed his platforms. By selecting Ryan, the Republican candidate has taken one step closer to clarifying his ideological position."

"Ryan has a reputation as a hardliner -- one who can speak directly to the angry soul of the Tea Party base. Ryan wants to lower taxes (also for the highest earners), he wants to further cut social benefits (including food stamps for the needy and government healthcare for pensioners), he wants to limit the authority of environmental protection agencies, he disputes the existence of climate change, he is against abortion, opposes same-sex marriages and he would like to increase military expenditures. The US election will get more suspenseful with a Romney & Ryan ticket."

"But a Romney-Ryan ticket could also be a boon for the Democratic Party base because the vice president's radical positions could push many so far undecided voters to the center. That's especially true of the very groups that proved to be decisive in Obama's election in 2008: women, African Americans, Latinos and retired people. In that sense, Romney's choice of candidate … also entails enormous political risks for the Republicans."

"Certainly, Ryan is not Palin. He is more cosmopolitan than the former Alaska governor -- and he could help to win his home state of Wisconsin, an important swing state, for the Republicans. With his budget plan, he has also presented one that his party can identify with."

"But he also brings along characteristics that will provide numerous points of attack for the Democrats during the campaign. As the Republicans' leading point man on budget issues, he largely represents policies that would reduce the tax burden for the richest while increasing the burdens on the socially weak classes. During the last Bush administration, he also participated in the government's policy of accruing mass debt under which the country is still suffering today -- through tax cuts, war costs and a very expensive program to subsidize medications for senior citizens. Indeed, the candidate is likely to come in handy to Obama's campaign team in the coming weeks."