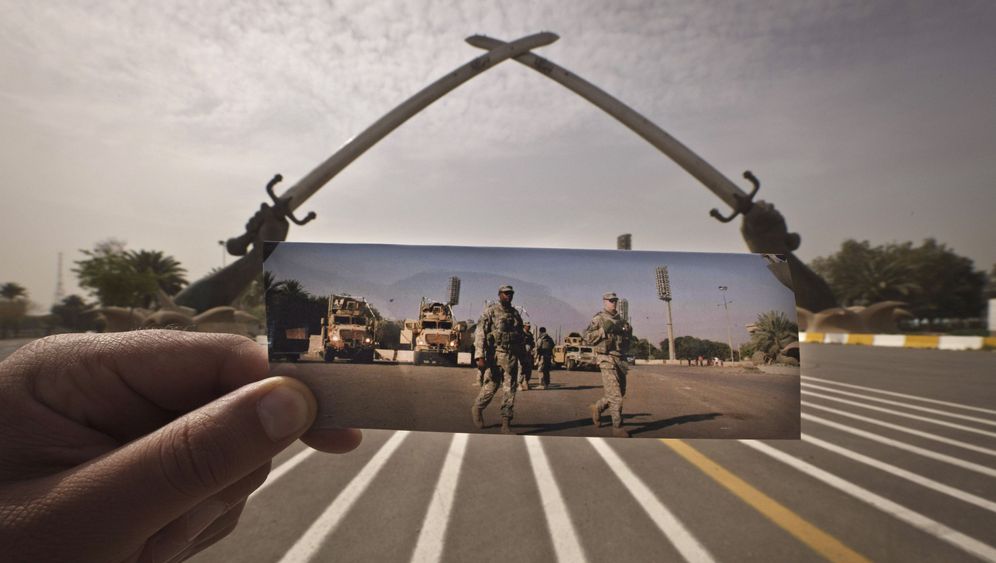 On the 10th anniversary of the American invasion of Iraq, the conflict's complicated legacy continues to unfold.

One day ahead of the anniversary, President Barack Obama paid tribute on Tuesday to the nearly 4,500 United States soldiers who died in the conflict, in addition to the more than 30,000 who were wounded before troops left the country in 2011.

The scale of these personal sacrifices, however, pales in comparison to the price paid by the Iraqi population, of whom more than 100,000 are estimated to have been killed. While Obama opposed the war and campaigned for office with pledges to pull US troops out of Iraq, the situation in the country they left behind remains fragile at best.

A recent spike in ongoing political unrest and sectarian violence in the country was highlighted once again late on Tuesday when terrorist group al-Qaida claimed responsibility for a series of suicide attacks that left some 65 people dead. "We will have our revenge," read an al-Qaida statement on a jihadist website.

Ignoring fierce opposition to the invasion from many countries abroad -- including Germany and France -- the United States, under then-President George W. Bush, began bombing the Iraqi capital Baghdad on March 20, 2003, calling the operation "shock and awe." The aim of the war was to oust Iraqi dictator Saddam Hussein and take out his "weapons of mass destruction." Though Hussein was eventually found, tried and executed, no WMDs were ever found.

The war went on to cost the US government hundreds of billions of dollars, and, according to German editorialists, a great deal of credibility. On the anniversary of the invasion, they take a look this week at the state of America and the Middle East one decade after the war.

"Ten years ago when the US armed forces attacked Iraq with a few allies who served as alibis, then reached Baghdad after a few days and drove out Saddam Hussein, the US experienced a collective feeling of satisfaction. Iraq was revenge for New York. One can put it that bluntly today because naturally there was a need for retaliation, for a demonstration of strength. The public justifications for the war were periphery by comparison: chemical weapons, a nuclear program and Saddam as the long-time bogeyman. No, America wanted to re-establish its authority."

"Today, American policy has largely recovered from its perspective of hyper-hegemony. But at what price? No one would claim any longer that order and stability, much less democracy, can be achieved by force of arms. And the country wouldn't even inwardly admit to the immense debts it has piled up in the shadow of its wars. No one wants to gauge the loss of credibility that America and the West have suffered in the rest of the world, either. However, those in Germany who would triumphantly wag their fingers should think twice. Elegant statecraft was nowhere to be found in the divisive opposition to George W. Bush."

"In history there is not always a clear sequence of causalities. … But the Iraq war generated a powerful break -- both for the people in the region and America. It marked the start of a phase of deep societal shift in the Arab world, and the beginning of a new world order for the US. Proof of this comes with President Barack Obama's visit to Israel this week -- the first of his presidency, and one that is largely powerless. The Statue of Liberty still stands in the New York harbor, announcing America's mission to the world. It's a mission that has become unimaginably large in the Middle East -- so big that even the US must humbly acknowledge its limits."

"The Iraq war serves mainly as yet another lesson that domestic and regional balance of power can't be changed by even the most oppressive foreign military power. It's a lesson that is constantly forgotten."

"The balance of power in the Arab world won't be sustainably altered through foreign intervention, but from the inside -- and even that is a difficult undertaking, as we've seen in the last two turbulent years of upheaval. The Iraq war probably delayed change in the Arab world by several years because the Arab dictators were able to discredit their indigenous democracy movements with a simple: 'Do you want to become like Iraq?'. Because Iraq represents much of what the Arabs do not want: a society destroyed and polarized by foreign intervention with a traumatized population. It was in spite of the Iraq war, not because of it, that a decade later the Arab world indeed began to change. It's chaotic, turbulent, and there's an unknown outcome. But this time it's autonomous."

"It was a war that the United States basically chose for itself, and then decided upon quickly based on its military superiority. But they failed to achieve peace, if it's to be defined in broader terms than just Saddam Hussein's fall. They had no plan for it. Its motives, circumstances and results have made the Iraq war a strategic failure in the eyes of many. … The Iraqis have to bear the consequences, but so do the Americans. George W. Bush's government was so convinced of its 'mission' that it managed to create a huge rift in the Western community. The approach led to an intra-Western confrontation about its conformity to international law, which damaged the reputation of the US. The skepticism of interventions that President Obama faces is in part due to the country's moral discreditation, in addition to the country's economic depletion."

"In any case, an episode that began on a late summer day in September 2001 has come to an end. Without the 'attack on America,' the Bush administration would not have gone after the al-Qaida leaders and their Taliban helpers in Afghanistan, and the US would not have marched into Iraq after Saddam Hussein (whose overthrow had been the official goal of American policy since the late 1990s). Thousands of American soldiers and over 100,000 Iraqis died. Hundreds of billions of dollars were devoured by both wars. From now on, because the achievements have been so limited compared to the costs, the US will practice greater restraint. Its role in the Libya uprising and the Syria conflict have shown that already. America is unlikely to engage in war again 'only' for the sake of democracy in the troubled Arab world. This kind of idealism -- or neoconservative furor -- won't be mustered again anytime soon. The question is whether global power is now swinging from one extreme to another."