It was supposed to be a routine morale-boosting visit to German soldiers in Afghanistan. But German Chancellor Angela Merkel's surprise arrival in the northern city of Mazar-e-Sharif on Monday was overshadowed by the killing of 16 civilians, including women and children, allegedly by a US soldier at the weekend.

During her visit to Mazar-e-Sharif, Merkel condemned the attack, calling it a "dreadful deed."

The suspected shooter, a US Army staff sergeant, is in custody at a NATO base in Afghanistan. He is thought to have acted alone.

The Taliban has sworn to take revenge for the shooting spree, and the retribution appears to have already started. On Tuesday, militants attacked a government delegation that included two of Afghan President Hamid Karzai's brothers, who were visiting the village in Panjwai district in Kandahar province where the massacre happened. One Afghan soldier and three militants were killed in the attack.

The massacre comes at a time when anti-American sentiment is already high in Afghanistan. In February, US soldiers inadvertently burned copies of the Koran at a NATO base in the capital Kabul, an incident that triggered riots across the country. The previous month, a video was made public that showed US marines urinating on dead Afghans.

'The Will Is There'

Speaking in Mazar-e-Sharif, Merkel also appeared to call the timetable for the NATO pullout into question, suggesting that the 2014 withdrawal date might be overly optimistic. "I cannot yet say if we will manage it by 2013 or 2014," she said, adding that there had been some progress in Afghan reconciliation efforts but not to the extent that Germany was able to commit to leaving. "The will is there, we want to succeed," she said.

One of the biggest contributors to the NATO-led International Security Assistance Force after the US and Britain, Germany has around 4,800 troops in Afghanistan, mainly in the north of the country, out of a total of approximately 130,000 ISAF troops. The German contingent is due to be withdrawn by the end of 2014, along with the rest of the ISAF forces.

NATO insists that the massacre will not affect plans to turn over security to local forces. A spokeswoman for the alliance told the Associated Press that it was an "isolated incident" which "doesn't change our commitment to the mission and to the timetable."

"It could be that this will be the last visit by Chancellor Angela Merkel to German troops in Afghanistan. Contrary to the fears of some over-zealous opposition politicians, the planned withdrawal date can no longer be changed. The withdrawal of a large troop contingent is not only an extremely dangerous military operation, it is also a major logistical project. … Preparations are made and dependencies created that cannot simply be changed overnight, even if the situation requires it."

"The chancellor's visit to the Bundeswehr soldiers stationed in Mazar-e-Sharif was overshadowed by the massacre committed by the US soldier in Kandahar (…). The resulting promises of revenge by the Taliban are a vile mockery. Most of the civilian casualties of this war have resulted from the Taliban's terrorism strategy, which affects the local population more than the foreign soldiers. It is, however, part of the psychological effects of a decade-long intervention war that the 'occupiers' are increasingly seen as being responsible for the killing and misery. But part of the truth is also that the brutalizing effects of the conflict also puts a strain on foreign soldiers and causes them psychological damage."

"Following the massacre, there is a growing danger that the demands for a withdrawal will become too powerful and will make (politicians) blind to the real dangers that threaten Afghanistan. The greatest danger comes from the radical Taliban who have no interest in a political solution. After the massacre, they are stronger than ever, and time is on their side. Their counterparts are the factions of the Northern Alliance, who live in fear of revenge by the Taliban and who are unwilling to pursue reconciliation. Both extreme groups can only be weakened if the moderate groups in the middle are strengthened, and in particular if those Taliban who are willing to negotiate are brought into the public eye and given a face and a voice.

"But time is running through (the West's) fingers, and, since the weekend, more quickly than ever. The decisions that are made now will have an impact on Afghanistan for years. Those decisions will determine whether the country will be able to maintain peace by itself after the withdrawal of Western troops. Those who now make their judgments based on an oversimplified view of the situation are partially responsible for the lack of peace."

"The terrible shooting rampage by a US Army sergeant that targeted Afghan civilians is not the reason that the war in Afghanistan was lost. The seeds of defeat were already contained in the overambitious political goals of the original military operation, even if there were fundamentally no alternatives (to an invasion of Afghanistan to overthrow the Taliban following the Sept. 11 attacks). But if (the US) hadn't had naively high expectations for Operation Enduring Freedom, it would not have dragged on for over a decade -- and the US soldier, who was apparently severely mentally disturbed, wouldn't have had a chance to kill children and women in his private nocturnal rampage."

"Ever since Obama began discussing a withdrawal in late 2010, the Taliban have known that they would soon be left alone with their fellow Afghans again. When that happens, they will make another grab for power."

"Even the goal of a strategic partnership between Washington and Kabul is uncertain. Obama plans to keep small contingents of troops in the country. But in the aftermath of the Koran burnings and the new shooting spree, there is the risk that a situation will develop like the one in Iraq, where the country rejected American plans to maintain a military presence."

"The limit of tolerance has been reached, the parliament in Kabul has declared, and President Hamid Karzai spoke of an 'unforgivable crime.' These are signs that the relationship between the US and Afghanistan is more damaged than ever. It is possible that it can no longer even be repaired, if those who are politically responsible do not pursue intelligent and well conceived damage control. And one thing is clear: If the Afghan opinion of US soldiers continues to decrease this quickly, it will also have an effect on the German ISAF contingent."

"The success of the US Army withdrawal -- and also the end of the Bundeswehr mission in 2014 -- depends on whether the lost trust can be won back. An apology from US President Barack Obama will hardly be enough. The US justice system must severely punish acts of violence, and even mere provocations by soldiers. (An example was set by a case) one year ago, when the leader of the 'Kill Team' was handed a life-long sentence because he and his comrades had hunted down Afghan civilians."

"For the Taliban, the behavior of some US soldiers is the best propaganda: urinating on the corpses of suspected insurgents, burning copies of the Koran and now a civilian massacre, with many children among the dead. On top of that, there is the almost daily occurrence of 'collateral damage.' Afghans' tolerance is running out, the parliament in Kabul said on Monday. The prompt apologies of NATO military commanders are appropriate and important. But when individual incidents mount up to an unbearable extent, and apologies become constantly necessary, something fundamental is wrong."

"(The West) had planned a face-saving troop withdrawal, carried out in a responsible way. But the latest events have only worsened the debacle and weakened the prospects of peace. For one, they stir up mutual hatred. When international soldiers and advisers have to live in constant fear of being killed by their Afghan 'partners,' while, on the other side, Afghan families don't feel safe from crazy US soldiers, the desire for a swift withdrawal grows on both sides." 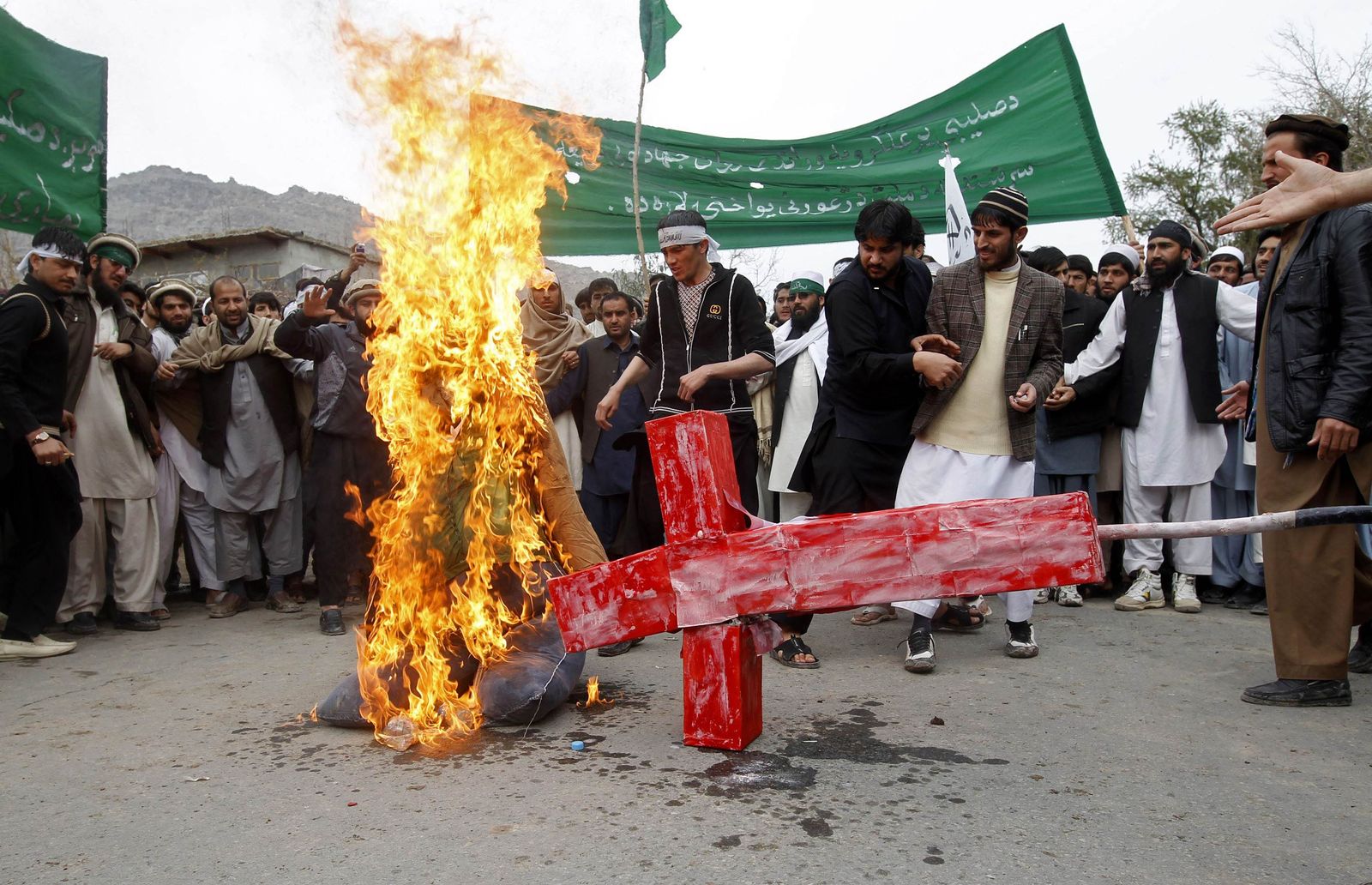 A demonstration in Jalalabad province on Tuesday against Sunday's massacre.