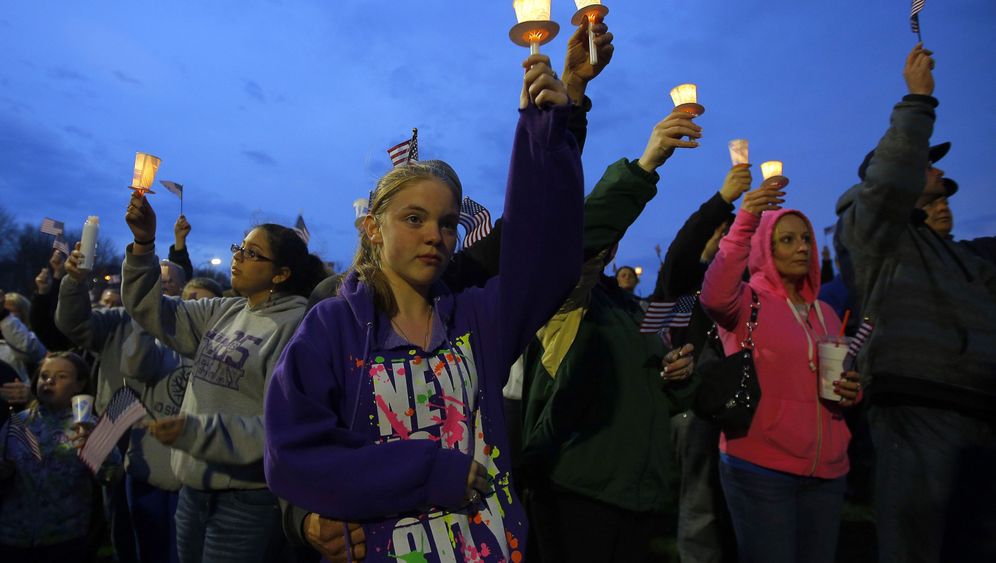 Three people were killed and more than 170 injured when two bombs went off near the finish line of the prestigious Boston Marathon event on April 15. As authorities continue to investigate the deadly incident, Bostonians are mourning the victims.

Among the dead in the attack against spectators of the prestigious sporting event was 8-year-old Martin Richard, whose mother and sister were also injured. A photograph of the boy holding a sign that reads "peace" has quickly become a symbol of the tragedy as it is published around the globe. Krystle Campbell, a 29-year-old restaurant manager, and a Chinese graduate student at Boston University identified as Lu Lingzi by the Shenyang Evening News, also perished in the attack.

Some 70 people injured by the bombs remained hospitalized on Tuesday night, 24 of them in critical condition, according to the the Boston Globe. As they recovered, hundreds of people gathered in various spots around the city to mourn the victims on Tuesday evening, singing and holding candlelight vigils.

With police presence high across the city, investigators are still searching for evidence and sifting through videos and photos of the event. So far, they have reportedly found that the two bombs were likely made from pressure cookers and filled with shrapnel, then placed in dark nylon bags and left at the scene. No one has claimed responsibility for the attacks, and no suspects are in custody, which has prompted the FBI to ask the public for tips.

President Barack Obama, who will travel to Boston on Thursday to speak at a memorial service, has called the attacks an "act of terror." Following the worst bombings in the US since the Sept. 11, 2001, anxiety is high. Two flights were reportedly disrupted on Tuesday due to security fears and nervous passengers. Adding to these concerns, the FBI is investigating a suspicious letter sent to Mississippi Senator Roger Wicker, which tested positive for the deadly poison ricin, police said Tuesday night.

Still, the country's reaction has been decidedly measured, German editorialists argue on Wednesday. They encourage Western countries to remain calm and resist curbing further civil liberties in response to terrorism.

"After the attacks of Sept. 11, 2001, the Americans built a powerful network of institutions to prevent such attacks. And indeed, until Boston, it also managed to thwart many terrorist plots. It was clear, however, that this series of successes wouldn't last forever. The public will probably have to live with the fact that it will be under the threat of totalitarian forces for several more decades. The only thing that will help is a mixture of vigilance and calm. … At the same time, we must not allow ourselves to be distracted from our lives, our sports and other festivities, even if radicals manage to strike again. It took a few years, but after 9/11, the democracies of the West have found a balanced response to terrorism. All in all, open society has proven itself to be both tough and capable of learning. It is this inner strength that characterizes our societies and repeatedly challenges the rage of extremists. Anyone who thinks they need to use bombs has already lost the battle of ideas."

"Once again, terrorism's simplicity is clear. The same mechanisms that changed the course of history more than 11 years ago are still working today -- the attack on the unsuspecting crowd, the paralyzing effect of numerous images, the symbolic place, the collective fears. Although Boston doesn't come close to the dimensions of the 9/11 attacks on New York and Washington, terrorism still works the same way."

"But luckily, this also holds true: Because terror has the greatest effect on the mind, much of its devastating force can be eased through thoughtfulness and serenity. Given the monstrosity of 9/11, this inner distance was not possible at the time. But after Boston it must be possible. President Obama waited a long time before using the word terrorism. His prudence is helpful and contributes to a de-escalation."

"Hysteria is the triumph of terror, but America has responded remarkably unhysterically to the bombs in Boston. This demonstrates a new maturity -- but also an unceasing fatigue. The Americans want to leave the decade of terror behind them, but the terrorists aren't ready to give up. Not yet. Eventually, however, its futility will finally be understood."

"What is so perfidious about bomb attacks is that their effect is so broad. In addition to the bystanders, they are also a strike against all of society, which subsequently has to live with restrictions and further curtailments of civil rights and liberties."

"The Boston bombs hit a marathon race rich in tradition. Thousands came here without checkpoints or body searches to cheer on 23,000 runners. That has now changed, and it's to be feared that the kinds of security checkpoints previously only seen at airports will be applied to city marathons and, more generally, events with mass crowds in the future."

"Sporting events, e.g. events with high symbolic significance and mass audiences, have always been potential targets. They were in Munich in 1972, at the Summer Olympics in Atlanta in 1996 and at the 2010 Africa Cup in Angola, where the Togo national team was attacked. The drama at the Munich Summer Games 41 years ago fundamentally changed everything. Since then, Olympic Games have become high security events monitored by police, special forces and militaries. Free access to stadiums, sporting facilities or Olympic Villages is no longer possible. In fact, there are very few sports that still offer space where one can manuever freely. Marathons were among them. So will they now become the subject of intense security?"

"What remains is an uneasy feeling for the next visit to a marathon. But this feeling -- which arises at shopping areas, in the subway or as a demonstrator in a crowd of thousands -- cannot be allowed to become so overpowering that people are willing to abandon open spaces and progress made in civil liberties. The answer to the bombings of Boston can only be: We are all willing to endure this uneasy feeling for the sake of civil society."

"The Boston bombs were detonated on a public holiday in Massachusetts that commemorates the first battles of the Revolutionary War. Maybe the murderers see themselves as descendants of those revolutionaries in a fight against the repressive power of the state. What madness that would be! The culprits behind the Boston attacks aren't brave heroes but cowardly murderers who turned a grand sporting event into a bloodbath. President Obama has repeatedly had to find comforting words for a troubled nation, most recently after the massacre at an elementary school. He's going to have to do so again, with Americans expecting authorities to quickly find the perpetrators. And with the hope that Boston doesn't mark the launch of a new spate of terrorist attacks, because the whole world felt the consequences of 9/11."