The speech was originally conceived as a call to arms. But in a televised address on Tuesday evening, United States President Barack Obama said he will hold off on military action in Syria and pursue diplomatic measures instead. As his constituents at home and his allies and enemies abroad looked on, Obama said he had agreed to a Russian proposal for international monitors to confiscate and destroy Syria's chemical weapons arsenal. The president said he had asked Congress to postpone a vote authorizing the use of force, adding, however, that he had ordered the US military to "be in a position to respond" if diplomatic efforts failed.

The American president also continued to argue his case for a military response to Syrian autocrat Bashar Assad's reported deployment of chemical weapons in the suburbs of Damascus on Aug. 21. "The images from this massacre are sickening," he said. "Sometimes, resolutions and statements of condemnation are not enough.

Nevertheless, he acknowledged the profound reluctance of Americans to get behind another foreign military engagement with the experiences of Iraq and Afghanistan still so fresh.

Also behind Obama's about-face is his failure to rally sufficient international support for a military operation. Although 25 countries signed on to the US-penned joint statement on the sidelines of the G-20 summit in St. Petersburg urging a "clear and strong response" in Syria, only France appeared willing to participate in an American-led offensive without a United Nations mandate.

The UN released a report on Wednesday confirming at least eight massacres have been perpetrated in Syria by Assad's regime and supporters, and one by the rebels over the past year and a half, but it stopped short of verifying Assad's responsibility for the Aug. 21 chemical weapons attack, which the Syrian dictator vehemently denies orchestrating.

President Obama said he welcomed the Russian plan as an alternative to military intervention, but added, "It's too early to tell whether this offer will succeed." Critics of the proposal argue that Moscow's refusal to include any threat of military force in the deal with Syria or to assess blame for the poison gas attack renders the maneuver ineffectual.

What's being referred to as Plan B was set into motion by an ostensibly throw-away comment made by US Secretary of State John Kerry in London on Monday, in which he said that Assad's only chance to prevent a US military strike was to "turn over every single bit of his chemical weapons to the international community in the next week." Russia and Syria embraced the idea, which quickly gained traction in the diplomatic community.

Obama spoke by telephone on Tuesday with French President François Hollande and British Prime Minister David Cameron. All three agreed to work together with Russia and China toward a diplomatic solution. French Foreign Minister Laurent Fabius said Wednesday that France would put a resolution to the UN Security Council to place Syria's chemical weapons under international control and begin the dismantling process. The measure is largely an attempt to make sure the Russian plan is not used as a stalling tactic.

German Chancellor Angela Merkel, like many in the international community, is likely breathing a sigh of relief. The chancellor, who is currently in the midst of a re-election campaign, has already taken heat for her delay in signing onto the G-20 joint statement, something that was depicted as a diplomatic blunder. Now that Obama has retreated, she is likely spared the necessity of taking a firm position on intervention in Syria -- at least until after the Sept. 22 election.

The German press on Wednesday criticized not only the American President, but the larger diplomatic community in the West, for its erratic behavior "in the face of mass suffering." Conservative Die Welt was not the only outlet to intimate that Obama had been outmaneuvered by Russian President Vladimir Putin and Assad. While opinions were mixed over whether American military intervention in Syria is presently the right move, there was general agreement that the Russian plan is unlikely to have the desired effect.

"If what is being referred to as 'Plan B' does end up becoming a reality, it has many advantages. The US would not execute an unsanctioned military strike against Damascus ... Obama would avoid the humiliation of being held back by his own Congress. He would even be able to appropriately argue that without the threat of intervention, the Syrian leader would never have budged on the topic of chemical weapons."

"Is a happy ending likely in this Greek tragedy? Certainly not. It remains completely uncertain whether 'Plan B' can be implemented at all. Yes, after a long period of denial, Assad has finally admitted to the existence of chemical weapons in Syria … There is a danger that Assad and Putin are only buying time, and that they will postpone the initiative by engaging in countless debates about draft resolutions and the conditions of inspection."

"The zig-zagging on display from the international community, and particularly here in the West, when it comes to Syria is astounding. That wouldn't be so bad -- finding a peaceful solution to this increasingly brutal conflict is worth every effort -- except that the waffling is driven by pure cynicism."

"Particularly outrageous is the way US Secretary of State John Kerry inadvertently hinted during a press conference at the idea of Assad handing over his chemical weapons, only to withdraw the suggestion as being not seriously meant, only for his president to then seize on the proposal. The incident made it crystal clear to all that many Western capitals have still not decided how far they want to go on the Syria question and that everything thus far has been nothing but unscrupulous maneuvering -- and that in the face of mass suffering."

"The fact that the United States and Russia are moving closer will not prevent the Assad regime from committing murders. Contrary to what many headlines are claiming, the problem in Syria is not the fact that 1,400 people died in one night as a result of a poison gas attack. The problem is that Syria has been using conventional, internationally accepted weapons against its own people on a daily basis for two-and-a-half years. The 1,400 poison gas victims are 'only' the tip of the iceberg."

"The danger seems to be averted: Bashar Assad has officially agreed to give over his chemical weapons arsenal to international control. Many new rounds of negotiations are kicking off. Meanwhile Assad's army and militias that support him can continue to follow the principle of scorched earth. Perhaps even more undisturbed than before, because Assad's official concession allows him to play the part of an internationally recognized interlocutor."

"Syria's President Bashar Assad is a master in the game of deception and tactical baiting, and Russian President Vladimir Putin knows how to look into the cameras innocently to once again disarm the West's attempt at a forceful response to Syrian war crimes. Just last year, the Americans suggested that Moscow confiscate Syria's weapons of mass destruction … in vain. The consequences are well known. Syria deployed chemical weapons. Over 1,000 people died and more than two million have fled."

"So one is well advised to be wary of Syrian assurances they will clear their poison gas stockpiles."

"Dear Barack Obama, you are the most powerful person in the world. Why not bring all of this to an end in a flash? The push of a button. Drones. The most powerful man in the world could destroy this evil. What irritates me is that he does not dispute the evil. Red line -- that was the phrase. Your red line has become soft. In summary, I can say: You are a wimp."

"You were a social organizer. You enraptured millions with, 'Yes, we can!' America is the world's policeman. America defends global values. Well, Barack Obama is a weak cop. He is too nice. He's a good family man. His problem is that he doesn't get out the baseball bat -- against evil." 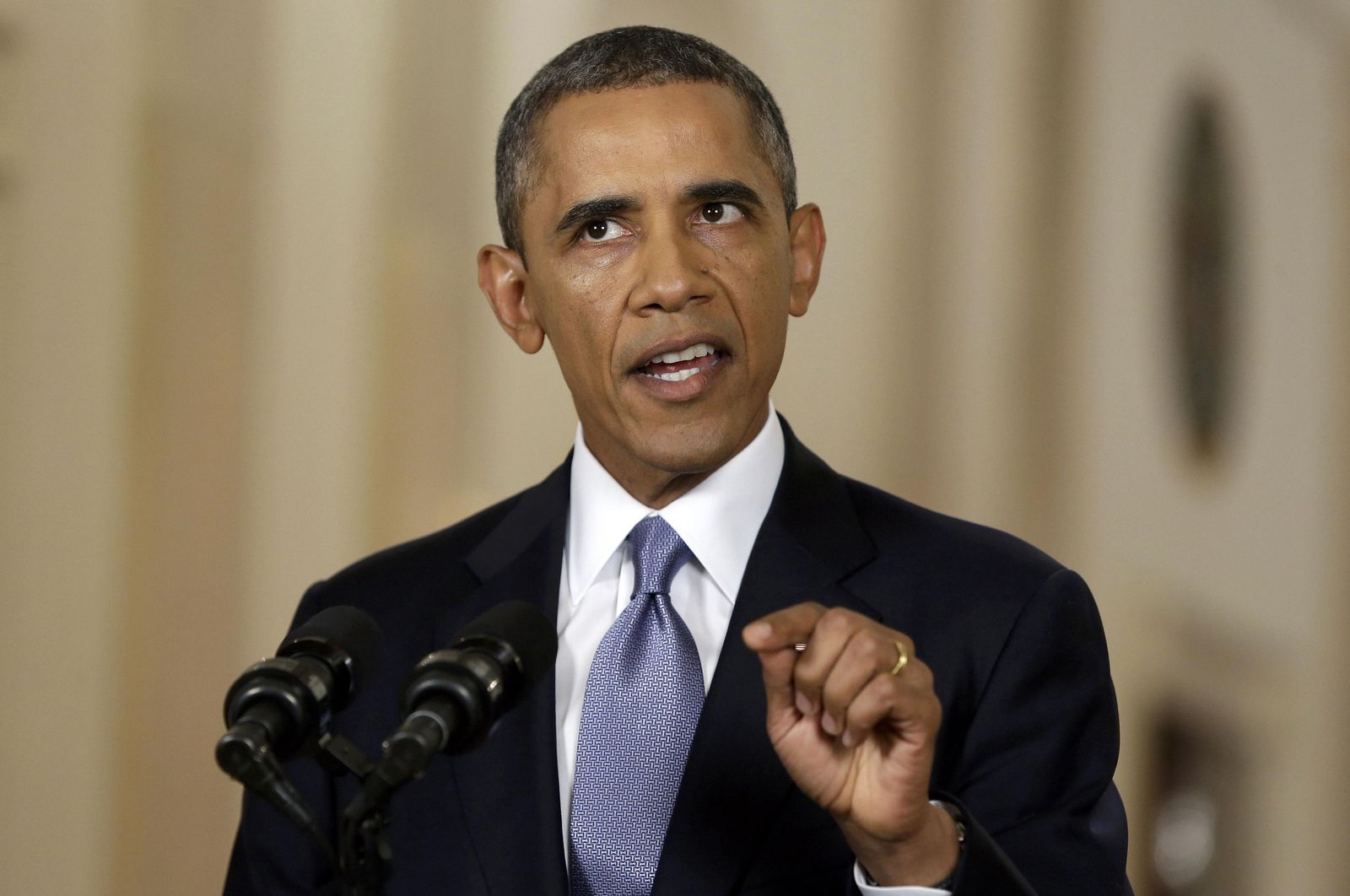 US President Barack Obama gives his televised address to the nation from the White House on Tuesday.