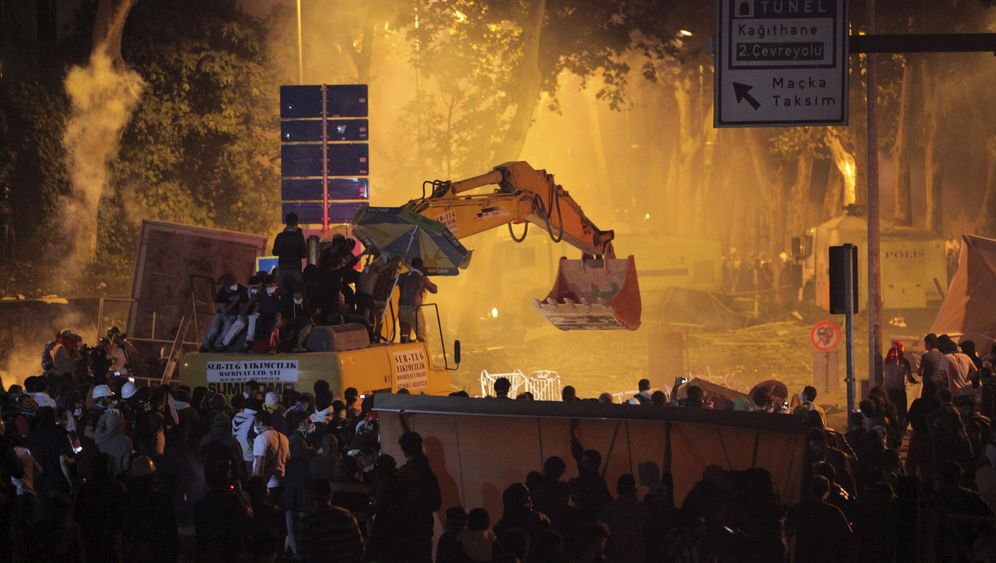 Protesters clashed with police in Istanbul and several other Turkish cities Sunday night and again on Monday in some of the worse violence since anti-government protests began three days ago. What started as a demonstration against plans to bulldoze a park near Istanbul's central Taksim Square to make way for a shopping mall has developed into broader resistance to the government of Prime Minister Recep Tayyip Erdogan. Erdogan responded to the initial demonstration with a brutal crackdown, sending police forces to fire tear gas at the demonstrators.

The wave of unrest that followed signifies the biggest challenge to Erdogan's leadership in the 10 years since he's been in office. The protesters complain that the prime minister and his Justice and Development Party (AKP) are forcing conservative Islamic mores on the population and growing increasingly authoritarian -- even as Erdogan has been lauded in the West for strengthening Turkey economically and bolstering its influence on the world stage.

On Sunday night, thousands protested in the Besiktas neighborhood, where the prime minister's office is located, and were met once more with a heavy response from police, who fired tear gas and water cannons at the protesters, according to Arabic news channel al-Jazeera.

More than 1,000 people have been injured in the clashes, with at least two deaths, according to human rights organization Amnesty International. The Turkish government reports nearly 1,000 arrests, and Interior Minister Muammer Güler told Turkish journalists that there have been some 90 protests in 48 out of Turkey's 81 provinces.

Criticism from the West

Erdogan's use of muscle against the demonstrators has ignited a wave of criticism from the West. The White House released a statement Sunday evening urging that all parties make an effort to "calm the situation" and emphasizing that peaceful demonstrations are "part of democratic expression."

European Union foreign policy chief Catherine Ashton issued a statement through a spokesman that she "regrets disproportionate use of force by members of the Turkish police" and called for talks between the two sides.

In the midst of the unrest, Erdogan voiced regret for the actions of his security forces but remained defiant about the broader accusations against him. "I ask in the name of God, Tayyip Erdogan is a dictator? If you are the kind of person who can call someone who serves their people a dictator, then I have no words for you," Erdogan said in a televised speech on Sunday. He renewed his calls for calm on Monday, urging people not to be provoked by protests he said had been organized by "extremist elements."

On Monday morning, German commentators reacted with support for the demonstrators and sharp criticism of Erdogan's handling of the situation and his leadership in general.

"It has taken a long time for the liberal, secular Turks to lose their patience. They have gritted their teeth and endured it as the conservative-Islamic government of Prime Minister Recep Tayyip Erdogan reined in their freedoms. … And it was a comparatively minor issue that caused things to boil over -- the planned clearing of trees in a historic park, challenged by only a small number of protesters."

"But Erdogan's brutality against the peaceful demonstrators caused the protests to swell violently. Now they are finally unloading their frustration and rage over the repression and Islamization of the last 10 years. The protest movement in Turkey is potentially dangerous for Erdogan's government. For the first time since taking office, he is being confronted with the wrath of the people."

"It was no coincidence that the protests began over Gezi Park. The construction project that was to replace the trees is just one of many controversial Erdogan ventures that has elicited criticism from residents, environmentalists and city planners. Erdogan never strived for social or political consensus for these plans. His governance has become increasingly autocratic. His critics call him the 'Sultan.' Now the people are unleashing their pent-up fury over this arrogance of power, their anger at the Islamic-conservative government that tries to impose its religious values on society."

"During the Arab Spring, Erdogan quickly rallied to the side of those who protested against dictatorial regimes. But he apparently learned nothing from these movements. While the oppressed people in the Middle East and North Africa strove for more freedoms, Erdogan restricted democratic rights. Never since the end of the military dictatorships have so many journalists sat in Turkish prisons. In his 10 years in power, Erdogan has tripled the average income, but also the size of the so-called 'security apparatus'"

"On Saturday night on Taksim Square in the heart of Istanbul, a half-million people celebrated their first victory over Erdogan since he first took office more than 10 years ago. It is still unclear what the political ramifications will be. Erdogan rose to power by promising to boost democracy in Turkey despite the military. But after a decade in power, he is increasingly seen as the one responsible for preventing democratic developments. After the events in recent days, he is no longer untouchable. People have seen that resistance can be successful."

"Rather than showing respect for other points of view, Erdogan only demonstrates ignorance. Increasingly, he has stressed his identity as a Sunni Muslim and has acted less and less like a democrat -- which is why the anger is now so intense. The protest to save a park in Istanbul was just the match necessary to light a huge fire. It has been fed by the fear that a religious majority wants to impose its conservative, Islamist lifestyle on the secular and liberal-Muslim minority. Anger over growing corruption and fear of violence spilling over from Syria also play a role."

"Erdogan, who constantly says he wants to create a new, more pious youth, does not understand the youth at all. It may be that his young Muslims of the future will find him great, but the young people of today have had enough of being lectured at and censured in strict patriarchal tones: 'Drink buttermilk, not beer -- and if you must, do it at home!' 'Have more children!' 'Learn Ottoman history!' 'Whoever is against me, is against god.'"

"When the protest against the plan to level the park began, he said, 'Do what you want. The decision has already been made.' That's when the patricidal instinct awoke in Istanbul's youth. The many hundreds of thousands of demonstrators were all young. That doesn't bode well for Erdogan's goal to Islamicize the youth. And that means that the future of Turkey will be more liberal than he would like."