Is Iran about to ditch its isolationist course and seek compromise with the West? The surprisingly clear landslide victory won by moderate cleric Hassan Rohani in the country's presidential election on Friday has ignited hopes that it will, after eight years of confrontation under his predecessor, Mahmoud Ahmadinejad.

Rohani is an insider, having held top posts in the Iranian regime since the 1979 Islamic revolution, but the reform movement, violently suppressed after protests in 2009 against alleged electoral fraud in Ahmadinejad's re-election that year, has embraced him.

That's because Rohani has called for an end to the "era of extremism" and pledged to introduce a charta of citizens' rights, improve the position of women in Iranian society, boost media rights and scale back the power of the secret services.

Known in the West as Iran's main nuclear negotiator in 2003-2005, Rohani immediately sought to build bridges. He welcomed the street parties that followed his election but also had talks with the conservative speaker of parliament.

"With their celebrations last night, the Iranian people showed they are hopeful about the future and, God willing, morals and moderation will govern the country," he told Iranian television.

German media commentators say he owes his election to frustration with the economic impact of Western imposed in the course of the The West suspects Iran is developing atomic weapons. Iran insists its nuclear program is for peaceful purposes. The West, say German editorials, should seize this chance for a relaunch of relations with Iran. But some commentators caution that the strings of power in Iran are still ultimately held by Supreme Leader Ayatollah Ali Khamenei, with whom Rohani, a man of the system, has a good rapport.

"Of course the establishment would have preferred to see one of its representatives as president again. But two decisive factors changed during Ahmadinejad's second term. The population is no longer prepared to pay the price of impoverishment for a policy of uncompromising isolation. In addition, Ahmadinejad took revenge for being repeatedly admonished in recent years by his erstwhile mentor, revolutionary leader Khamenei, by ensuring a fair election."

"The unity with which the reformers flocked to the moderate cleric Rohani and the divisions among the hardliners whose voters were divided among several candidates show that Iran has reached a crossroads: The hardliners are ideologically spent. They don't offer the Iranians the prospect of a better future. The reformers have been lucky with Rohani, who was initially underestimated. The skilful mediator doesn't pose as blatant a challenge to the Iranian establishment, which continues to hold the reins of power, as the brawny Rafsanjani did. But he's more assertive than Ahmadinejad's predecessor, the reformer Mohammad Khatami whose reform plans foundered against the hardliners' brick wall."

"Rohani will only be able to stand his ground againts the bastions of the republic such as the Republican Guard and the clerical institutions if people see that his policies are improving their standard of living, which would require a relaxation of the For that to happen Rohani will quickly have to explain what concessions he is prepared to make on uranium enrichment. Even if Khamenei were to resist such moves, Rohani could -- if the West played along -- ride the momentum of his surprise victory to get his way. Constructive negotiations with Iran were never more promising than they are now."

"The opposition movement that was violently crushed in 2009 has not disappeared. … After eight years under President Mahmoud Ahmadinejad, many voters agreed that something's got to change. But it will be difficult for Rohani to really improve living conditions in the country, as his cheering supporters demanded after the election. He says he will improve relations with the West and boost civil and human rights. And maybe the tone of the Iranian government will really get a little softer. But even though the former chief negotiator is well versed in Iran's nuclear policy -- supreme religious leader Khamenei will have the last word here as in foreign and security policy."

"The Iranian reform movement has woken up from its paralysis and has become an effective force again. Unlike four years ago after the controversial re-election of Mahmoud Ahmadinejad, no one is levelling accusations of electoral fraud this time."

"Maybe the Ayatollah has realized that rallying calls to the population won't preserve the country from economic ruin and that he needs a moderate reformer to save the system and his own position. Rohani has the makings of a strong president. But the new man isn't an opponent of the system. He's a man of the system who has served in very high offices, including as Khamenei's representative in the National Security Council for a long time. But the Europeans have found him to be a cultivated, personable negotiating partner with whom they came close to settling the troublesome nuclear dispute over the last decade."

"Looking at the situation in the Middle East, the timing isn't exactly favorable for reforms. The internationalization of the Syrian civil war, in which Tehran is steadfastly supporting President Bashar Assad, doesn't point to Iran giving up important positions. The same applies to the nuclear talks. Rohani too insists that his country has a contractual right to enriching uranium to 20 percent. It will be easier to discuss terms with him, but the West mustn't miss this chance for a new beginning. It would be an irreparable mistake to keep Rohani dangling on his outstretched arm, as the West did with Khatami."

"The result isn't just a surprise. It is also a message to the Iranian leadership, to the world and especially to the US: We Iranians want reforms. We are sick of isolation. And we have elected a man who is capable of standing his ground in the power network of the Islamic republic, who can seek compromise rather than confrontation and who can cautiously reach out to the US."

"On the other side the West -- and especially the US -- will have to give a sign that it is ready to find a way out of the political stalemate. But even US President Barack Obama can't take decisions alone. He has to take account of Congress and of US partner Israel. So it's by no means certain that the message of the Iranians will really be heard in Washington." 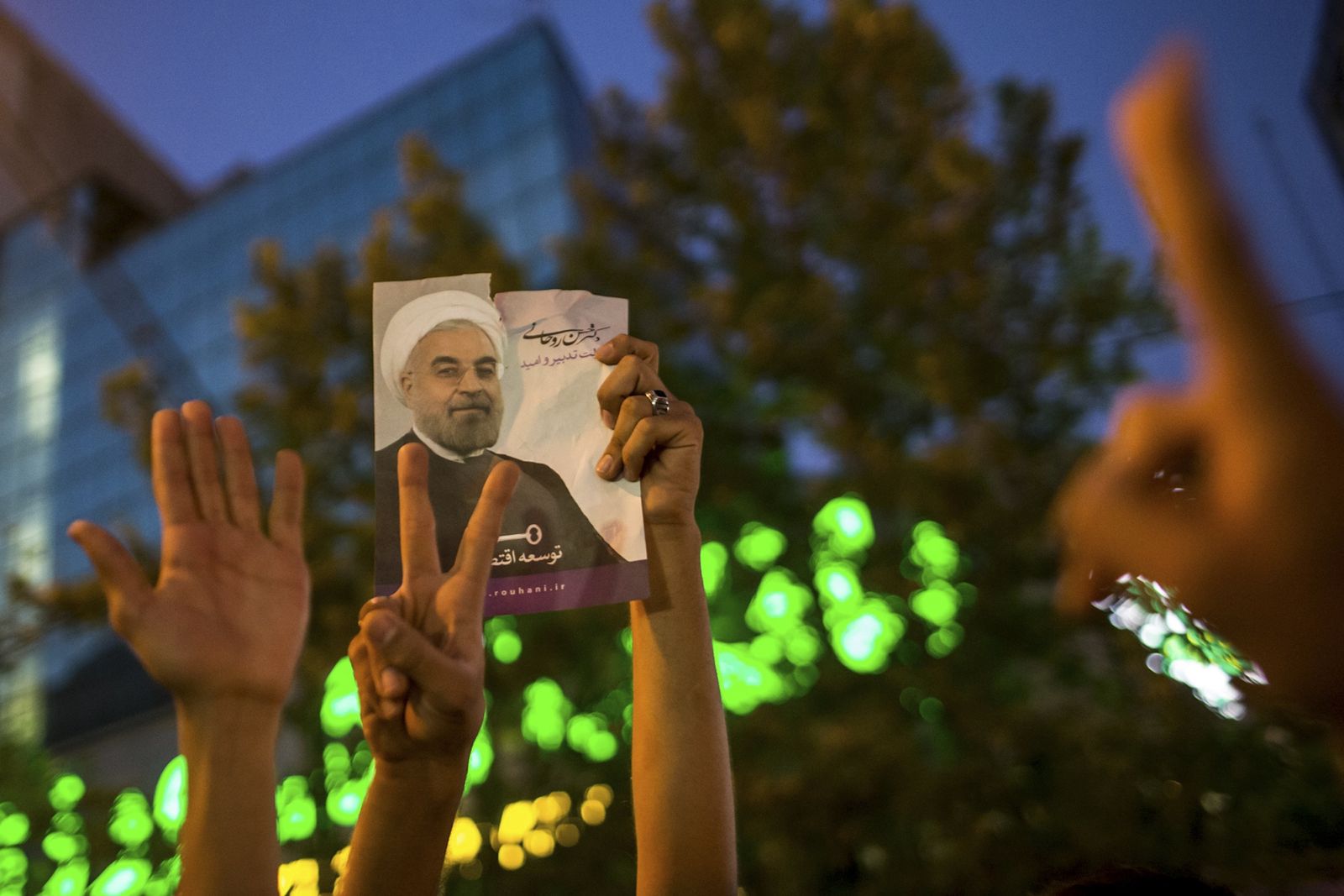 Supporters of moderate cleric Hassan Rohani hold a picture of him as they celebrate his victory in Iran's presidential election in Tehran.