All that's left is the clean-up. Workers across the Berlin city center were busy on Thursday morning dismantling grandstands in front of the Brandenburg Gate, packing up the vast security checkpoint at the Friedrichstrasse train station and loading vast numbers of police barricades onto flatbed trucks.

US President Barack Obama and his family left the German capital just after 10 p.m. on Wednesday night after spending a little over 24 hours in the city -- a day in which he met with German leaders, gave a keynote address before 4,000 people in the blazing sun and attended a gala dinner at Charlottenburg Palace.

He also, however, managed to remind Germans why they are such big fans of this president. Even if Tuesday and Wednesday marked the first time Obama had visited Berlin as president -- after fully five years in office -- he was able to make it seem as though Germany and the Germans were near and dear to him. He casually embraced German President Joachim Gauck, he referred to German Chancellor Merkel as simply "Angela" and he quickly took off his jacket at the beginning of his keynote speech in the blazing sun, saying: "We can be a little more informal among friends."

The audience ate it up. Sure there is concern in the country about Obama's drone attacks in Afghanistan and Pakistan. There is widespread disgust with the mind-boggling extent of online surveillance undertaken by the National Security Agency. There is also a good bit of disillusionment stemming from Obama's inability to close down the Guantanamo detention camp. The US president was asked about all of those issues during his stay in Berlin.

But Germans like nothing better than to be taken seriously -- and they are open to being charmed. Obama made a convincing show of doing both. He avoided subjects that might be difficult for his hosts, shying away from asking Germany to supply weapons to Syrian rebels and avoiding mention of Berlin's abstention on the United Nations Security Council vote to intervene in Libya. In his speech, which focused heavily on history, he even managed to turn World War II and the Holocaust into a rhetorical side note.

Instead, he opted to focus on nuclear arms reduction. One could, of course, see his decision to highlight such an issue -- one that everybody can agree on -- as an indication that the US does not see Germany as a foreign policy partner when it comes to more controversial issues. But coming from a president that most in Germany continue to revere despite the shortcomings that have by now become obvious to all, Berliners were more apt to see the logic of proposing cuts to the nuclear arsenal in a city so marked by the Cold War.

That, of course, was Obama's intention. And he left the city having achieved the primary goal of his visit -- that of putting a feel-good coat of paint on a trans-Atlantic relationship that had recently begun to show its age.

German commentators on Thursday, however, seemed largely immune to the charm offensive.

"(The speech) was a disappointment for those who hope for … for what actually? Clearly these phrases for the history books, which in themselves imply the claim of the US to lead the western World, don't exist anymore."

"But there was something else. There was a proposition made by the American president. Obama used the Brandenburg Gate, he used Berlin, and he used Angela Merkel and her East German heritage to send a clear signal to Russia. With his proposal to reduce the US nuclear weapon arsenal by one-third, he ventured into possibly the only foreign policy area in which he can initiate something positive -- and that is worldwide nuclear disarmament."

"A clear vow to lead on this issue is worthy of respect. The fact that this appeal to Russia was broadcast from Germany to the world shows what a central role Berlin still plays from America's point of view in its relations with Russia."

"Barack Obama's visit to Berlin was warm, extremely warm. But it didn't touch the Germans, neither warmly or coolly. Even the massive security measures that shut down the city center were largely accepted with a shrug. ...The indifference with which Obama was received is not an indication that Germans don't like Obama anymore. ... Rather, the American president himself signalled with all of his appearances on Wednesday that the moral and emotional chapter of the Cold War is finished. We are now getting into the fine print."

"America has become more foreign to us, too, and it doesn't help to evoke the great period of bonding during the Cold War. But Europeans have also become more foreign to Americans. How should Americans know and understand that which we ourselves don't know or understand? There is still a great lack of clarity about where the partially unified, partially divided continent of Europe is headed politically. Europe is complicated. Germany, the shame-faced regional power, is too. Europe could be extremely powerful internationally, but hasn't found a way to get there without sacrificing its traditional particularities. And last but not least: Angela Merkel insists stubbornly but with good reason that austerity and growth have to go hand-in-hand, but that austerity is non-negotiable. Obama doesn't like that and it has created genuine trans-Atlantic dissonance."

"Whatever Obama was before, today he is an unsentimental practitioner of realpolitik, which has ruled in America for some time. One could be more specific: Obama's foreign policy lacks any emotional dimension. The president is led by pragmatism and interests, with limits being set, if need be, by international law."

"That doesn't have to be wrong. The foreign policy of his predecessor, George W. Bush, was based purely on emotion, a mixture of megalomania and self-righteousness. After the attacks of Sept. 11, 2001, there was the thirst for revenge and his own moral mission, which was supposed to bring freedom to the entire world. Bush was proud of making decisions by gut instinct. But when it came to war and peace, things went terribly wrong."

"Obama works differently, even if he speaks as much about freedom as Bush did. Obama twists and turns and examines a foreign policy problem. After he has weighed all of the arguments, he then decides. That leads to a rational, and sometimes hesitant, but not empathetic foreign policy."

"Paradoxically, Europeans, especially the Germans, have their problems with both presidents. They despise Bush as a supposedly dim-witted cowboy. But in the meantime, they have become leery of the coldly analytical Obama, who kills suspected terrorists with drones and lets his government monitor the Internet."

"Obama's speech reminded one of the old Obama with his 'Yes We Can' and the rebirth of the American dream. ... It was not the image of a president who, with his (drone) directives, stands in the middle of the battle against terror or whose agencies pursue a far-reaching surveillance regime in the Internet and among journalists. No. In Berlin, the Obama spoke who … wants to make the world a bit better."

"Germany, once again, provided the TV-ready backdrop for a US president, but is the country really a partner to America? Obama's speech was more an address to the world than to Germany. ... Yet Germany and America need each other more than ever. Washington can't cope with the economic crises of our times on its own. The US government itself knows the importance of Berlin and would like to see Germany take on a greater global role. But Obama would never say as much directly."

"Why not? It is certainly not only a product of Obama's own reserved relationship to Germany. It has to do with a German foreign policy that permanently hides behind legal and moral qualms so as not to dirty its hands. Economically, a strong German role in the world is necessary and Berlin certainly plays a decisive role in the euro crisis. But politically and militarily, the Germans have chosen retreat."

"Obama, probably the best speaker in the world, used Berlin and the Brandenburg Gate to give a bad speech. He spoke about a lot, without saying much."

"He did not say anything about any of the many points in his speech -- maybe someone has the time to count them all. At no point did he make a proposal. As we could see, sitting in front of the TV, he had no plan. He wanted to get the thing over with. And he succeeded in doing that. But he also succeeded in robbing passion from his greatest enthusiasts."

"Obama is not one who cannot manage to get people excited about what it is he wants. That's what makes this appearance especially embarrassing. Everyone who has experienced seeing him or has read his captivating book knows that when he wants to get people thinking a certain way, he can. The only possible conclusion is that he didn't want to. Possibly the most important politician in the world has nothing planned. That is terrible news." 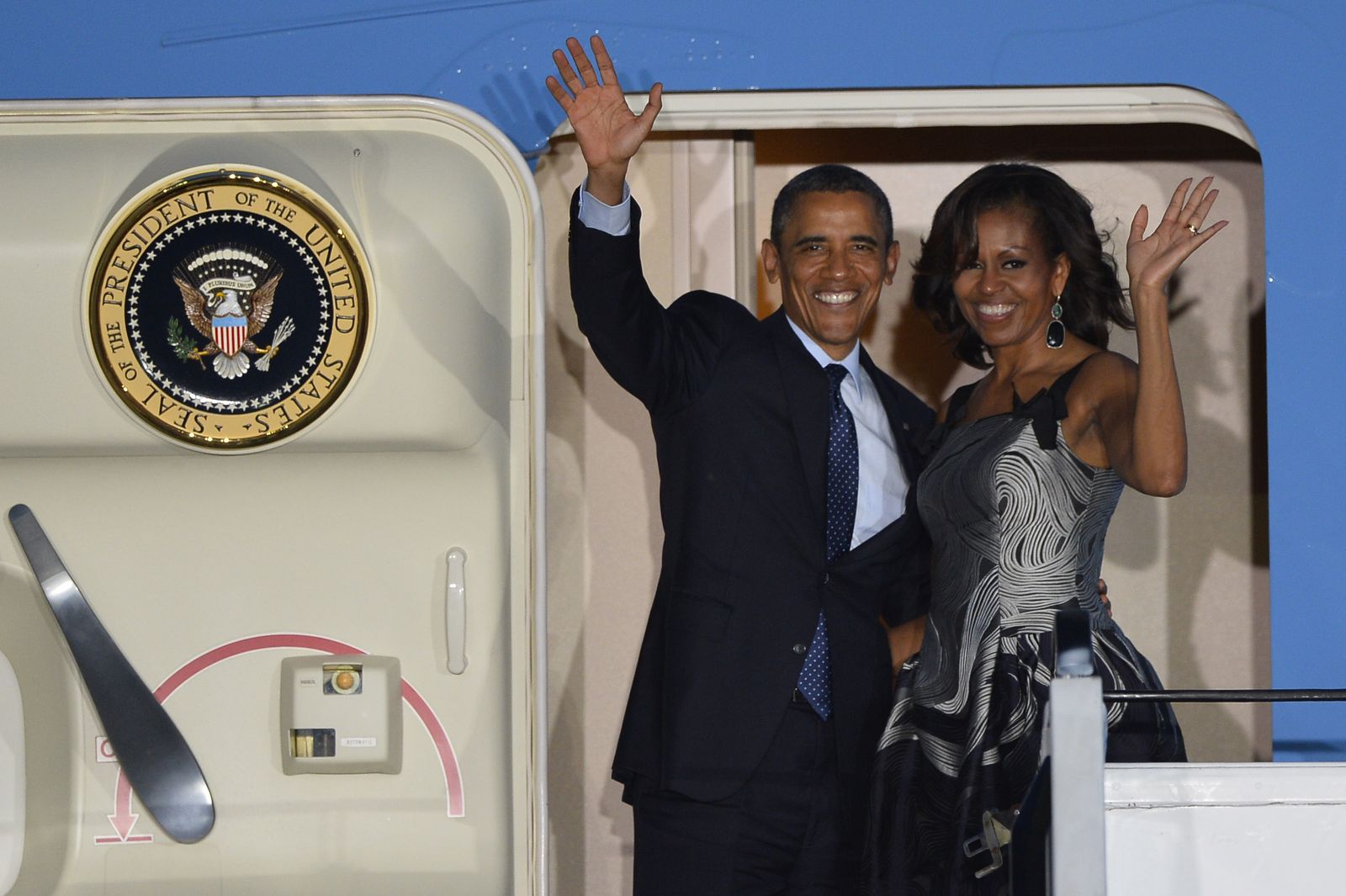 The Obamas left Berlin at just after 10 p.m. on Wednesday evening after a 24-hour visit.