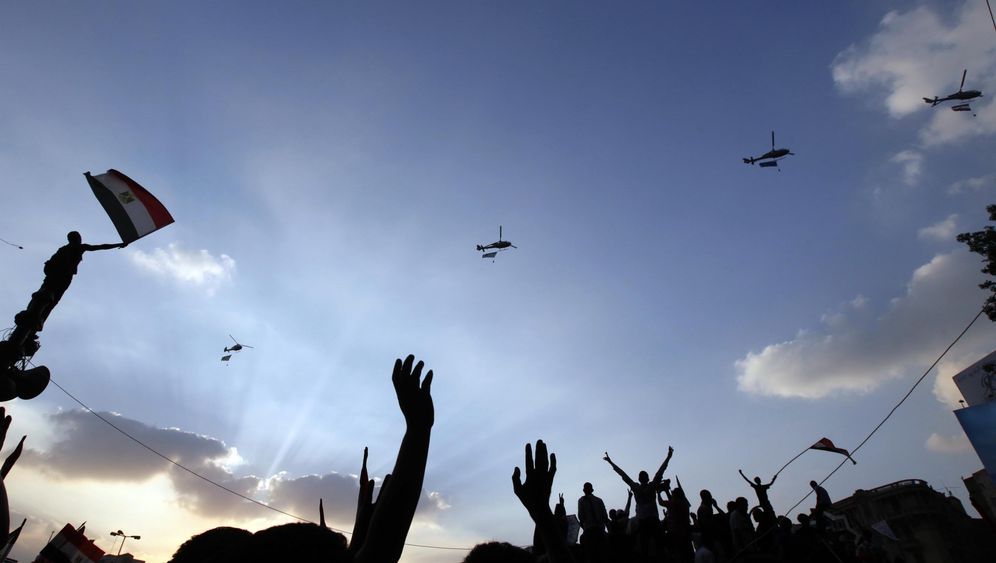 One day after the head of Egypt's armed forces issued President Mohammed Morsi a 48-hour ultimatum, the country is in a state of turmoil.

General Abdel Fattah al-Sisi said on Monday that the military would step in "if the demands of the people are not met." Five of Morsi's ministers resigned the same day, saying they wanted to show "solidarity" with the protesters. A sixth, Foreign Minister Mohamed Kamel Amr, followed suit on Tuesday. Yet Morsi, the country's first democratically elected president, has remained defiant, releasing a statement on Tuesday that he would not step down.

On June 30, the first anniversary of Morsi's election, hundreds of thousands of Egyptians took to the streets to call for his resignation. On July 1, a group of men stormed the Cairo headquarters of Morsi's Muslim Brotherhood party, setting small fires and looting the offices.

During the president's disastrous first year in office, Islamist radicals have increased their influence, violent unrest has spread throughout the country and the economy has taken a plunge.

Though the army says it has no intention of involving itself in government or politics, Morsi's allies in his Muslim Brotherhood party have been holding their own rallies to show support for the embattled president and have vowed to take to the streets to stop what they say is a "military coup."

What, though, can be done to calm the escalating violence? German editorialists take a closer look at the situation on Tuesday.

"Nobody knows who is going to govern Egypt in the end. Morsi? A transition leader? The army? The attack on the pompous party headquarters of the Muslim Brotherhood … and the first deaths as a result indicate that the violence is likely to increase. And there are some certainties: The Muslim Brothers, who appeared invincible just one year ago, have failed spectacularly ... The Muslim Brotherhood, the mother-organization of all Islamist groups, has become a weight on the shoulders of Islamists in the entire region. The demonstrative piety displayed by the brotherhood has not been able to cover up their political errors."

"If the Muslim Brotherhood were smart, they would now retreat, read a few handbooks on political inclusion, and try again in a couple of years. A share of the Egyptian electorate prefers religious parties and that preference must be served so that they don't fall into the hands of radicals. If the opposition is smart, it will allow the Muslim Brotherhood the opportunity to represent the pious. Mostly, though, the opposition shouldn't see the millions of anti-Morsi protesters as election helpers for the likes of ElBaradei, Mussa and Sabahi. It would be a good idea if Egypt's politicians would cease viewing their country as a trophy."

"Among all of the serious mistakes committed by Egyptian President Morsi, the worst is his undemocratic interpretation of the mandate granted him by the electorate. The belief that an election victory gives the majority the right to impose its will on the minority produces that which can now be seen on the streets of Cairo: a confrontation that threatens the very foundation of the state."

"The only way out is for Morsi to resign and for new elections to be held. But that can only happen if democracy is understood as a system whereby power is only handed out for a limited period of time -- as a power that expires when trust has disappeared and not only when an election is lost."

"Egyptian President Mohammed Morsi and Turkish Prime Minister Recep Tayyip Erdogan have one thing in common: They believe that democracy means merely that people are allowed to vote every four years. In between, they can rule as they like. They believe their democratic election grants them the freedom to do as they like, repress those who think differently and to use brutal violence."

"The huge demonstrations in recent days in Egypt have made absolutely clear to the new Egyptian government just how intense the anger is in the country. But one shouldn't expect the Morsi government to show understanding. His government has explained away the protests by speaking of conspiracy theories and influence from overseas. And he has called for his own followers to march as well. It is no wonder that many in Egypt are reminded of Morsi's predecessor, the autocrat Hosni Mubarak."

"The Egyptian revolution has reached a new phase. Disappointment with Morsi and his government, but particularly with the country's economic erosion, has spread dramatically. Extraordinary circumstances helped the Muslim Brotherhood to their election victory; they were the only organized group following the fall of Mubarak. But just one year later, the shine is off. Morsi has been unable to stop the plummeting reputation of Islamist politics, but his resignation would merely create a vacuum. The Muslim Brothers would be wise not to respond in kind to the violent destruction of their headquarters. An escalation of the violence would require the army to calm the situation. They have already issued the ultimatum."