Afghan President Hamid Karzai stirred up a diplomatic storm on Thursday when he reportedly called for international forces to pull out of Afghan villages, remain on their bases and, perhaps most importantly, hand over responsibility for providing security in the country to domestic forces in 2013, a year earlier than planned.

At a conference held in the western German city of Bonn in December, international leaders had agreed on late 2014 as the withdrawal date for foreign combat forces. But a series of events since then have shaken this resolve -- and made it more difficult for Karzai to stick to the plan.

In January, a video emerged of US Marines urinating on dead Afghans. In February, more than 30 Afghans and three American soldiers died during riots and gunfights after copies of the Koran were accidentally burned at a US military base. And most recently, over the weekend a US soldier allegedly went on a shooting rampage that left 16 Afghan civilians dead in two villages.

Thursday also saw the Taliban break off talks with American diplomats, citing "shaky, erratic and vague" US statements, according to Reuters.

Karzai's statements triggered different reactions among the nations contributing to the total of approximately 130,000 international troops in Afghanistan as part of the International Security Assistance Force (ISAF).

On Wednesday, a day before Karzai's announcement, US President Barack Obama and British Prime Minister David Cameron -- the leaders of the countries with the largest number of ISAF troops -- had said that they were willing to shift their forces into a support role in Afghanistan in 2013, but that the overall plan for withdrawing troops and handing over security to Afghan forces would remain the timetable agreed upon in December.

Nevertheless, as the presidential campaign heats up, some speculate that Obama might be tempted to heed Karzai's call to gain more support in the war-weary US. Indeed, the Associated Press cites a recent poll showing that more than 60 percent of Americans favor an immediate withdrawal from Afghanistan.

Germany, which has the third-largest contingent of troops in Afghanistan with around 4,800 soldiers, also seems to be changing its stance on the issue. During a one-day visit to German forces in Mazar-e-Sharif on Monday, German Chancellor Angela Merkel sowed confusion by saying shortly after her arrival that Germany "will succeed by 2013/2014." However, she calmed the resulting storm of speculation before departing by stating "2014 is the withdrawal date." This stance was reiterated on Wednesday by German Defense Minister Thomas de Maizière during an official visit to Kabul.

Nevertheless, on Friday morning, Foreign Minister Guido Westerwelle cast doubt on the German government's position once again. While on a trip to Armenia, Westerwelle stated, "We will certainly not stay in Afghanistan any longer than our allies or than the Afghan side desires."

Westerwelle's statement immediately sparked a reaction among Germany's opposition. Gernot Erler, deputy parliamentary group leader for the center-left Social Democrats (SPD), demanded that the government clarify whether it is pursuing an altered withdrawal plan and warned of a "race for the quickest withdrawal date."

Erler's worries were also echoed by some in the environmentalist Green Party. Tom Koenigs, a Greens parliamentarian and former United Nations special representative to Afghanistan, told German public broadcaster ARD Friday morning that he favored an early withdrawal from Afghanistan already next year. However, he stressed the need for concerted action by all ISAF members. "We went in as an alliance," he told the DPA news service, "and we should also go out as an alliance."

Poll figures released by German broadcaster ARD on Friday found that a majority of Germans -- 57 percent -- support an early withdrawal. Another 26 percent approved of the planned withdrawal date in 2014, while 12 percent favored pushing the date back even further.

In Friday's newspapers, German commentators weighed in on the debate.

"(Karzai's) audacious plan repudiates the Western heads of state and government, who -- despite great difficulties -- still want to stick to their pledge of only ending their combat mission in Afghanistan in late 2014. Barack Obama … will certainly not want to appear before his potential voters and guarantee that (America's) involvement in this unpopular war will run for the whole duration no matter what Karzai says. (Karzai's) idea would be completely appealing if only it were realistic. But, the Afghan military and police will not be in a position in 2013 to hold the Taliban in check."

"Still, for Karzai, it's not even about that anymore. He intends to share power with the Islamists and grant their wish -- that is, getting foreign troops out of Afghanistan as quickly as possible -- as a confidence-building measure."

"The time between now and 2014 was already somewhat short for the West to leave behind a bit of stability in the Hindu Kush. The Taliban has now put the peace talks on ice. They benefit the most from Karzai's move. The danger of a civil war is growing because the groups who are enemies of the Taliban will not accept their return to Kabul without a fight."

"It was to be expected that the events of recent weeks … would heat the Afghanistan debate back up. In the timeline of an announced withdrawal of Western troops, it could only lead to an acceleration. For this reason, the fact that President Karzai is now arguing for a swifter handover of security to Afghan forces is a maneuver based mainly on domestic political considerations. In doing so, he is signaling he's on the side of the segment of the population that views the foreign soldiers as occupiers rather than liberators. What's more, the consensus about the 2014 withdrawal date is crumbling among some NATO member states … ."

"Developments in Afghanistan are almost inevitably leading in one direction determined by the country's traditions. The combat forces, which are already organized according to ethnic groups, will once again divide into militias based on tribal or regional criteria. As a result, there will once again be 'warlords' or regional rulers with little regard for the central government in Kabul. Afghanistan will revert to being a loose federation with a weak supreme leader. But hopefully it will no longer be a safe haven for terrorists."

"Accordingly, it is understandable that, in the wake of the killing spree of a US soldier last week, Afghan President Hamid Karzai is now feeling more pressure at home to get rid of foreign troops as quickly as possible. … It's also understandable that US President Barack Obama would prefer to withdraw his soldiers from this unpopular conflict today rather than tomorrow to boost his chances of re-election in November."

"These things are understandable, but wrong. Already setting a withdrawal date for 2014 is overly ambitious. One shouldn't move this withdrawal date forward, especially not for unrelated reasons of domestic politics or campaign tactics."

"A premature withdrawal of troops would be fatal because, on the whole, Afghan security forces are still not in a position to take care of security in the country by themselves. It's already a fact that nobody talks about the idea of making Afghanistan into an orderly democracy anymore. But at least the successes in terms of civilian reconstruction should endure … ."

"One also has to ask whether it is smart to air on the global stage (thoughts about) pushing forward withdrawal dates and calling for American soldiers to kindly remain in their barracks. Almost at the same time as Karzai's statement, the Taliban broke off their talks with the United States -- and they might be more active in the run-up to a withdrawal. To keep the Taliban in check, there needs to be a functioning Afghan security apparatus or foreign assistance. If neither of them is present, things will turn out poorly for Afghanistan."

"Hamid Karzai's populist statements match up perfectly with the interests of the Western states that, along with their soldiers, have gotten tied up in an unwinnable war for more than 10 years. In formal terms at least, Washington, London, Berlin and Paris will stick to the agreed-upon withdrawal date for foreign troops set for the end of 2014. But it wouldn't bother anyone if it happened sooner. No one would complain."

"Karzai only said what everyone already thinks. The West's adventure in Afghanistan is already over. The political goal of making Afghanistan into a halfway peaceful country was forgotten long ago. Now, everyone just wants to get out of Afghanistan -- and the sooner, the better. It would be good if (the withdrawal) could go off in an elegant fashion. But it also wouldn't be a problem if it were rushed." 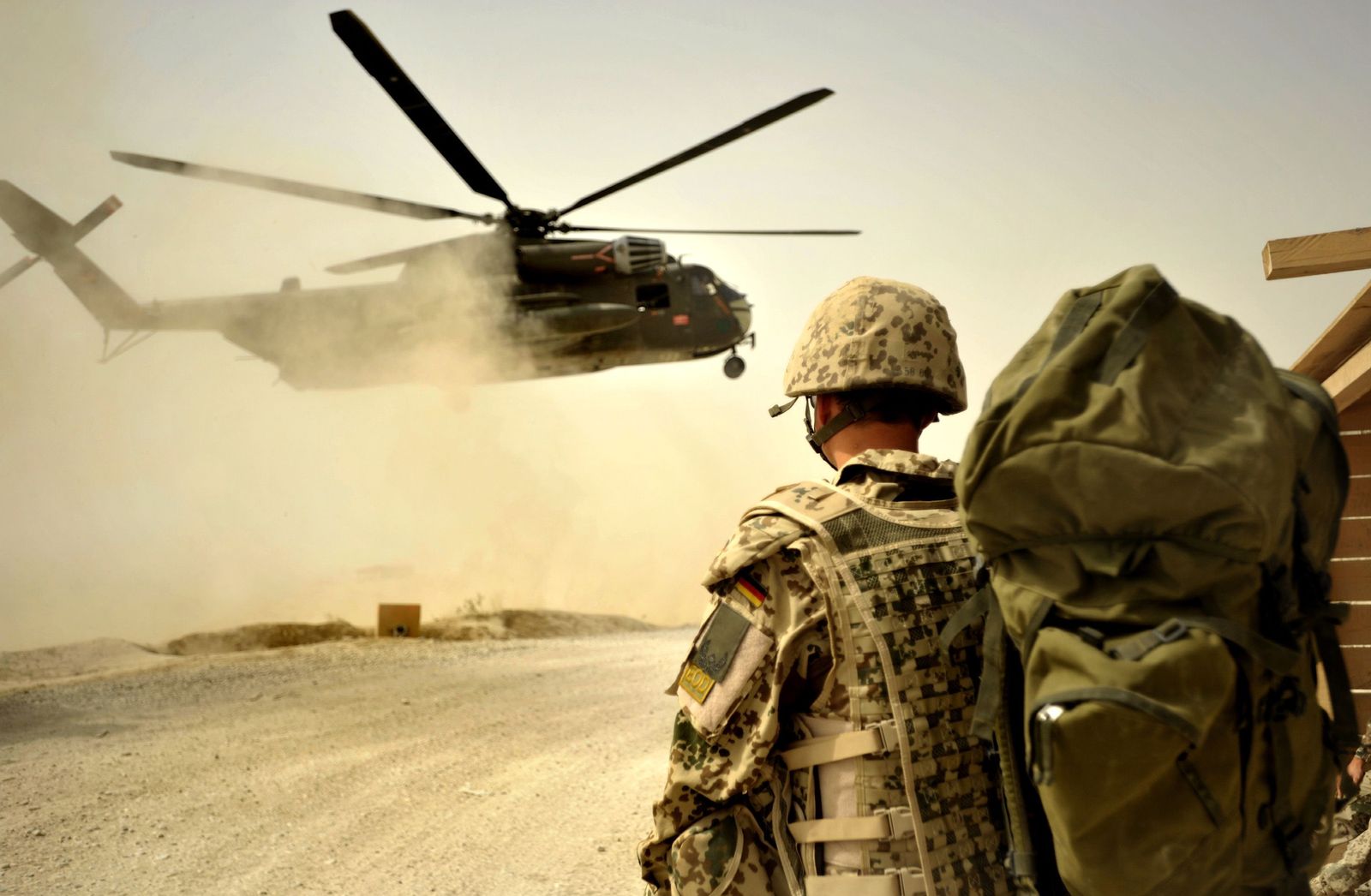 A German soldier watches a helicopter land in Afghanistan in Oct. 2011.