Salim Namour’s colleagues at the underground hospital in East Ghouta saw him as a rock of stability. The veteran doctor even called himself that: Sakhr, the rock. But on Aug. 21, 2013, Namour, too, reached his limits. "It was like Judgment Day," the doctor recalls.

Overnight, Volcano and M14 rockets rained down on rebel-held suburbs near Damascus, striking residential buildings. Impacts were also reported near mosques and at a primary school.

Namour recalls hearing over the radio that all doctors should head to the hospital immediately. Upon arrival, he saw the injured everywhere, many with no signs of any external wounds. People were struggling to breathe and were having seizures. Saliva oozed from their mouths. "The dying, the dead, it was horrible,” says Namour. Everything seemed to point to a poison gas attack.

Inside the cave, as the doctors called their underground hospital, they tore the clothes off the injured and rinsed them in water. They gave them shots of atropine as an antidote and administered oxygen. Namour and his colleagues fought to save lives until the next day at noon. But in many cases, they lost the battle.

More than 1,000 men, women and children died in the chemical weapons attack seven years ago. Experts with the United Nations ultimately determined that the poison gas sarin had been used, a chemical warfare agent that has been outlawed internationally. Namour provided the inspectors with samples of blood, clothes and hair from his patients. The doctor now lives in exile in Europe, but his precise location is not to be made public.

Ultimately, though, there was no response whatsoever. To this day, no one has had to answer for the crime. Nor for the dozens of additional instances in which the Assad regime is believed to have used poison gas against his own population.

A group of Syrian human rights activists and European international criminal law experts are seeking to change that. The group has conducted several years of research and has compiled well over 1,000 pages of evidence pertaining to the sarin attack in Ghouta in August 2013 and to another attack with the same nerve agent in Khan Sheikoun in April 2017.

In October, they filed a criminal complaint with the Federal Public Prosecutor General in Germany. "We are calling on the prosecutor to investigate the perpetrators of these horrific crimes," says London-based international criminal law expert Steve Kostas of the Open Society Justice Initiative, which filed the criminal complaint. The human rights organization Syrian Archive in Berlin and the Syrian Center for Media and Freedom of Expression in Paris are also involved.

It’s no coincidence that they chose Germany as the country in which to file the complaint. In recent years, Germany has proven that it is willing to bring war crimes and crimes against humanity to trial – regardless of where they are committed. Perpetrators from Rwanda, slave owners with the terrorist militia Islamic State (IS) and suspected torturers from Syria have already been dragged into court by the Federal Prosecutor's Office.

The investigators also haven't shied away from going after high-ranking officers in Assad’s apparatus. In 2018, German Chief Federal Prosecutor Peter Frank issued an arrest warrant for Jamil Hassan, the since deposed head of Syria’s Air Force Intelligence, although it is unclear whether the Syrian general is still alive today.

In a joint reporting project with German international broadcaster Deutsche Welle, DER SPIEGEL was able to review extensive documentation, view videos and speak with witnesses and survivors of the gas attack in Ghouta. The evidence against the Assad regime is overwhelming.

The non-governmental organizations involved in the case accuse 10 men inside the Syrian power apparatus of responsibility for the 2013 sarin attack. They include military figures like 60-year-old Brigadier General Ghassan Abbas, who at the time headed Branch 450 at the Scientific Studies and Research Center.

Intelligence agencies believe the Syrian chemical weapons program is concealed behind that harmless-sounding name. Abbas allegedly supervised the loading of the missiles with chemical weapons before the attack on Ghouta, and the European Union also considers him to be one of the organizers of the attack.

The NGOs believe it a virtual certainty that responsibility for the crimes extends all the way up to the president and his immediate circle. They also managed to track down a Syrian officer who is said to have turned his back on the regime. The officer claims that Assad’s younger brother Maher gave the order for the chemical weapons attack. His claim could not be independently corroborated, and the name of the defector has been kept secret. However, DER SPIEGEL obtained evidence seven years ago from a United Nations worker of Maher’s possible involvement in the massacre. The regime denies any guilt to this day.

In the coming days, the NGOs are planning to submit extensive additional evidence relating to the sarin attacks of 2013 and 2017 to federal prosecutors in Germany.

Hadi al-Khatib is currently assembling the evidence. The IT specialist is sitting on the ground floor of a gray building located near a highway in Berlin. The organization Syrian Archive, which he founded, has its offices there, and the walls are lined with photos of cluster munitions used by Assad’s military.

Khatib, who has been living in Germany since 2011, has been assembling a kind of digital memory of war atrocities in recent years. He was able to collect more than 3.5 million videos from Syria from the internet and then stored them on his servers before they could be deleted. The videos originated from YouTube, Twitter and Facebook or were sent to the archive by activists in Syria.

Archivist Hadi al-Khatib in his office in Berlin

Khatib and his co-workers are trying to verify the recordings by analyzing geodata hidden in the files and comparing them with satellite images.

If there are projectile fragments in images, they check whether the regime uses that kind of ammunition to determine possible responsibility for the attack. In Ghouta, missiles were deployed that Assad's army is known to use.

For the 2013 chemical weapons attack, the Syrian Archive says it has collected 349 verified videos that Khatib and his fellow campaigners now want to submit to the chief federal prosecutor. They are horrific images of men convulsing with cramps, of helpers washing the injured with water in order to decontaminate them, of children gasping for breath and apparently dying.

"The most difficult part," says Khatib, is that "it continues to happen, and the people who are responsible for these crimes are still free."

Investigators at the Federal Prosecutor’s Office are taking the complaint seriously, but they so far haven’t launched any of their own criminal proceedings against the suspected perpetrators. Instead, they are transferring the evidence to a structural investigative procedure that has been ongoing since 2011 within the authority’s international criminal law department.

The files now contain tens of thousands of pages documenting massacres, torture, rapes and the genocide of the Yazidi people by IS. Federal prosecutors have also compiled a number of reports from international organizations on alleged chemical weapons attacks in Syria and have questioned numerous witnesses.

The procedures were initially established to gather evidence that could later be submitted for review by international courts, such as a special tribunal for Syria or the International Criminal Court in The Hague. Such an approach, though, seems a long way off - in part because Russia, as a veto power in the UN Security Council, is standing in the way.

In the meantime, the Federal Prosecutor’s Office and Chief Prosecutor Frank have gone after individual perpetrators in Germany. In Koblenz, the world’s first trial is currently underway against representatives of the Assad regime who are alleged to have been partly responsible for the torture and systematic killing of prisoners. A doctor from a military hospital in Homs, who even practiced medicine in Germany until recently, is currently being held on similar charges.

The number of investigators involved has been increased several times. There are now 14 federal prosecutors in Karlsruhe and 28 investigators with the Federal Office of Criminal Investigation (BKA) addressing possible crimes under the International Criminal Code.

"No one is as active as the Germans in the pursuit of war crimes in Syria," says a staff member from an international organization that is working to preserve evidence in the conflict. "But Germany can't prosecute all the perpetrators."

At least one thing is making prosecutors’ jobs easier though: Many of the witnesses of Syrian war atrocities have managed to escape to Europe. It’s relatively easy for investigators to contact them with questions.

The criminal complaint in the sarin attack lists 17 men and women who are willing to testify. They include people like Eman and Mohammed F., a married couple from Zamalka in East Ghouta. They’ve been living in Germany for five years and requested that they not be quoted using their real names.

Both remember how neighbors knocked on their door at around 2:30 a.m. on the night of Aug. 21, 2013, and shouted: "chemical attack." Eman F. worked as a nurse at the time and rushed to the hospital. Her husband also tried to provide first aid. They saw people lying on the floor "as if they were ants killed with bug spray," says Eman F.

Suddenly, her husband Mohammed had a seizure, the nurse recollects. She says she was trying to give him the antidote atroprine when she fainted herself. Another missile had apparently struck nearby.

When the two regained consciousness, they searched for their eldest son and learned that he didn’t survive the chemical weapons attack.

Eman F. is still suffering the long-term consequences today. She appears to be severely traumatized and has been classified as severely disabled. "I hope that Assad and his entourage will be tried," says her husband Mohammed.

The Syrian president, though, remains untouchable for German investigators. As long as Assad remains in office, he is immune from prosecution.

That could change, though, if he ever steps down or is overthrown. There is no statute of limitations on war crimes. 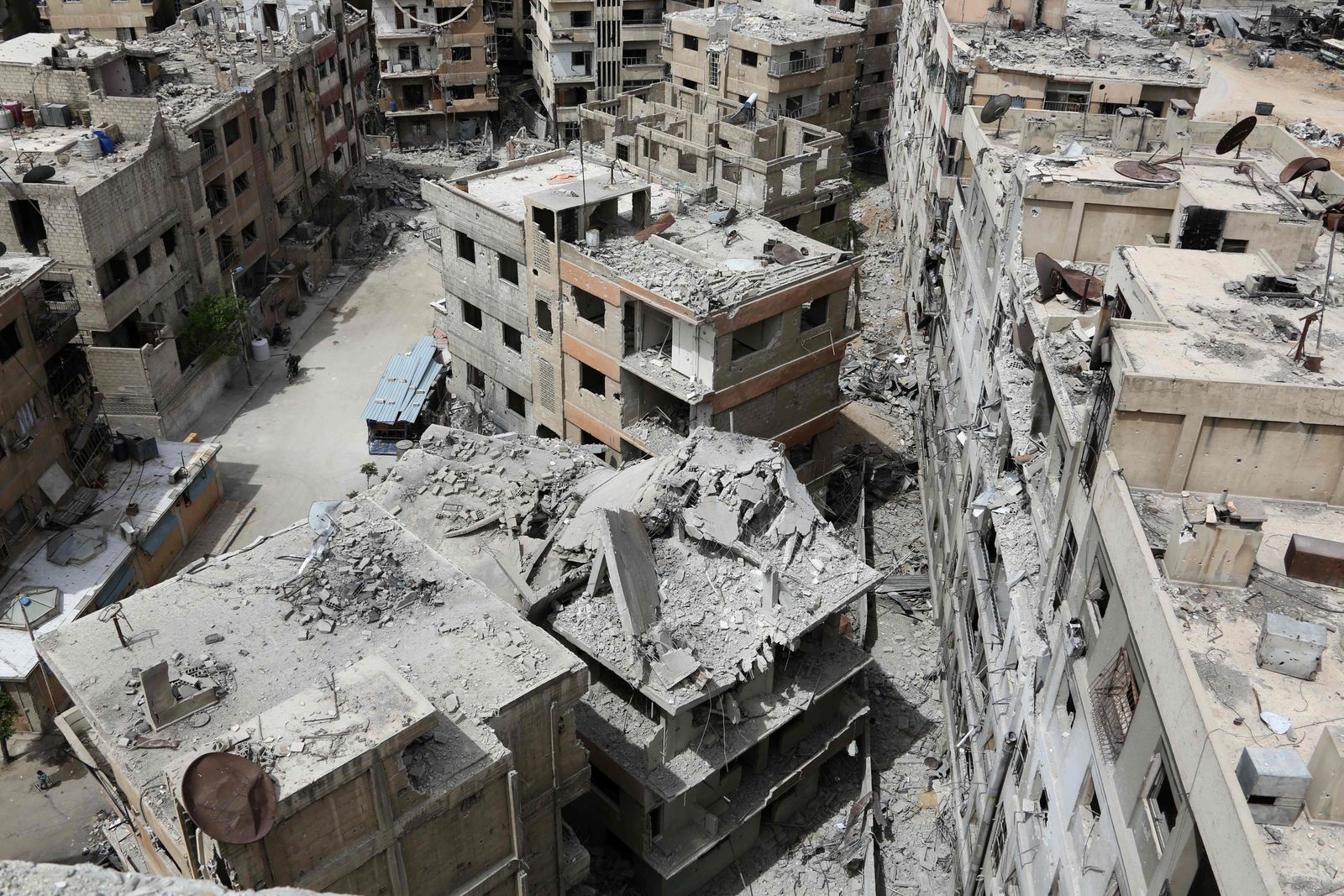 Destroyed buildings in a suburb of Damascus, Syria (archive photo) 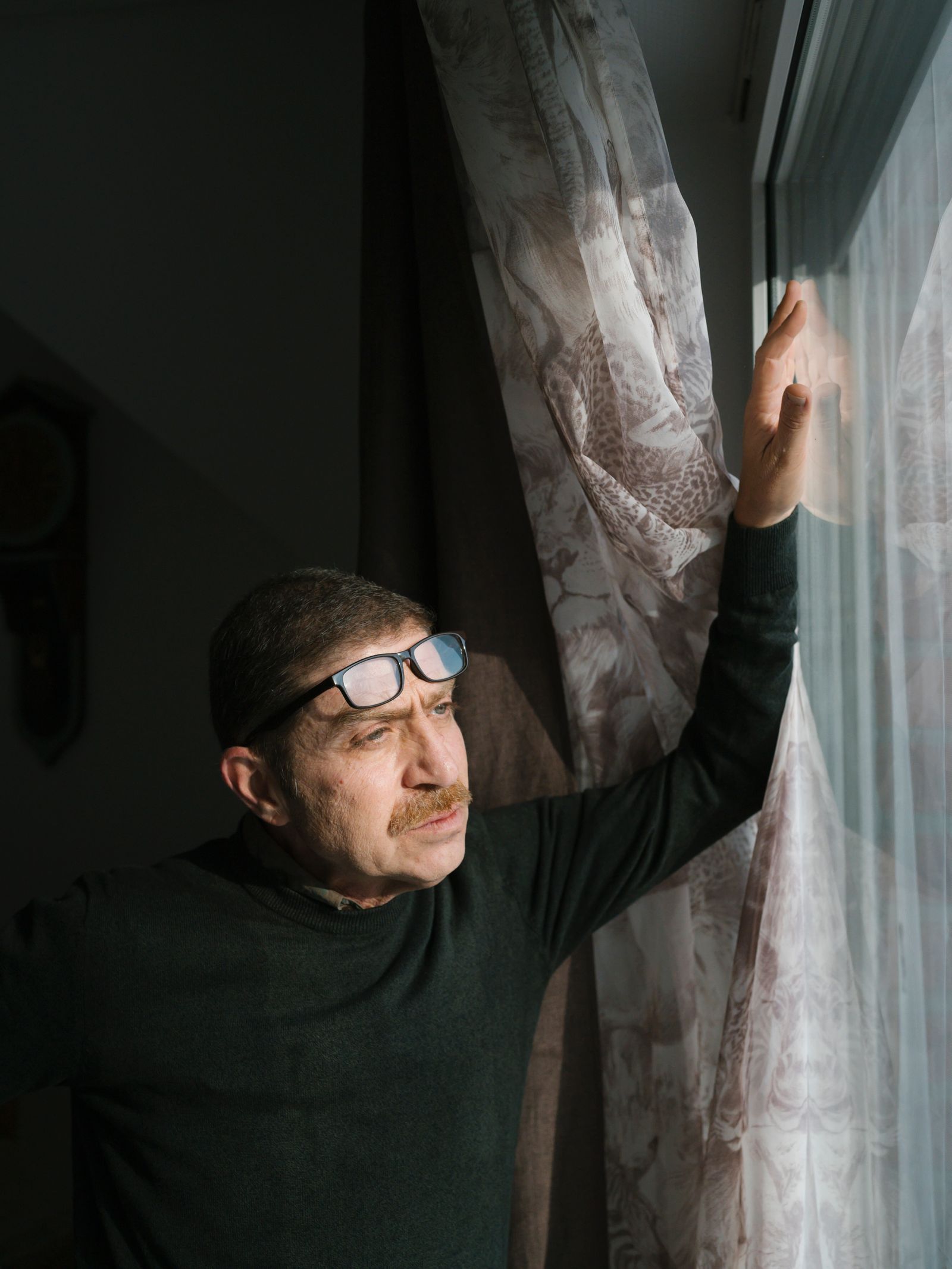 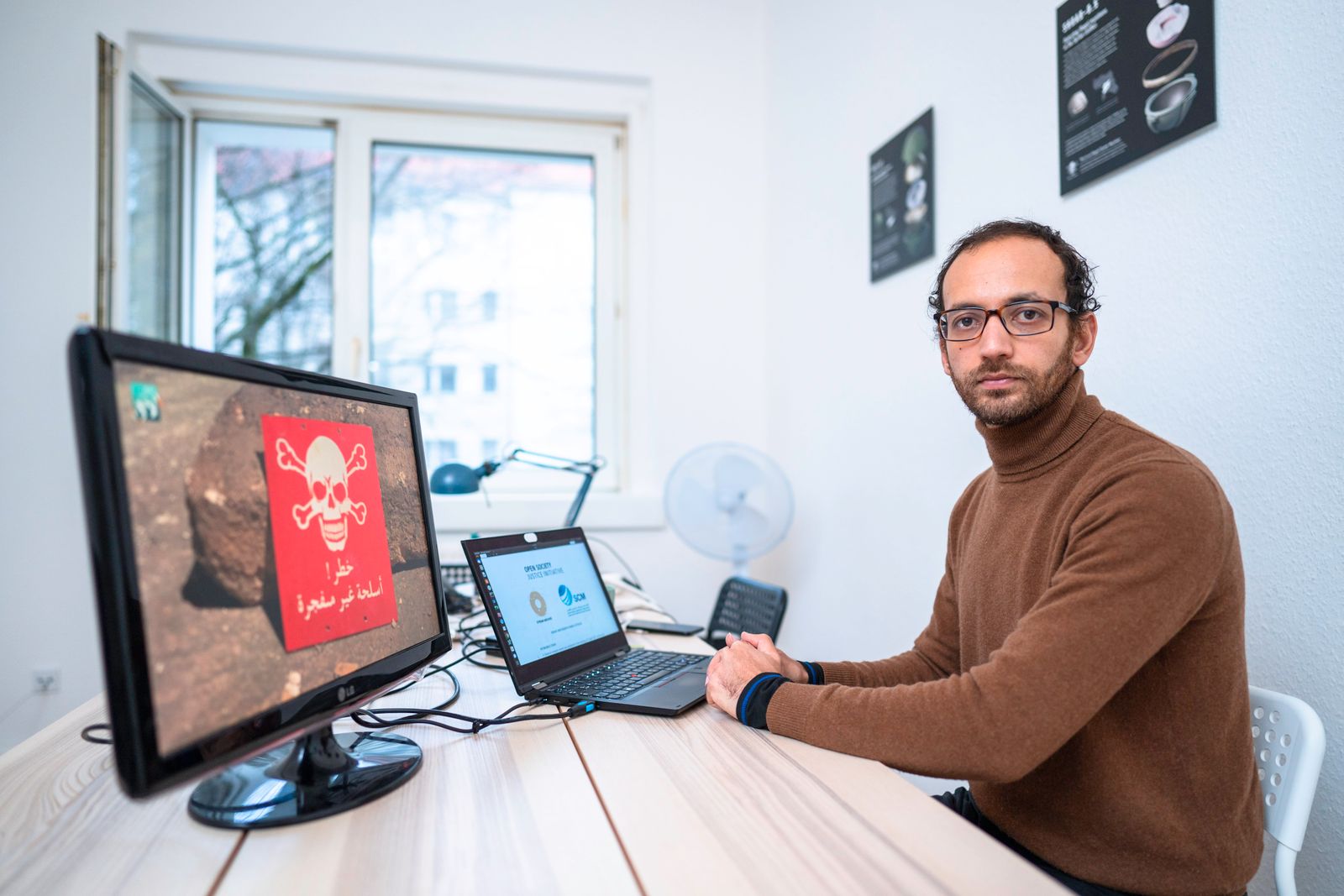 Archivist Hadi al-Khatib in his office in Berlin