Last year didn’t actually start badly for German-Russian relations. It was 2020 and the swing ride was still spinning on snow-covered Red Square when Angela Merkel arrived in mid-January for talks with Vladimir Putin. The German chancellor needed Moscow’s help because that was the only way she could carry out the big Libya summit with which Germany wanted to present itself as an arbiter of peace that same month.

The atmosphere at the meeting was surprisingly relaxed and friendly. The fact that Moscow and Berlin had just expelled diplomats from their respective countries wasn’t even mentioned. Nor was there any word about Berlin’s suspicions that Russian state agencies had organized a crime in the German capital in the summer of 2019: The murder of Zelimkhan Khangoshvili, an asylum-seeker of Chechen origin, strained relations, but not strongly enough to prevent cooperation in other areas.

Merkel’s visit to Moscow served as a prime example of traditional German policy toward Russia. The paradoxical principle of that policy is that you can have good and bad relationships at the same time, as long as you keep things neatly separated.

Nearly a year later, that meeting seems like a reminder of a bygone era with German-Russian relations now having sunk to a new low. "Since the end of the Soviet Union, the relationship has never been as complicated and as problematic as it is now," says Andrey Kortunov, director general of the Russian International Affairs Council, a Moscow think tank.

The relationship reached its nadir on Sept. 2, when Merkel appeared before the press and declared that Russian opposition politician Alexei Navalny had been poisoned with a "chemical nerve agent of the Novichok group,” which Germany military toxicologists had proven "beyond doubt.” She said someone had sought to "silence” Navalny and it was time for the Russians to explain themselves.

From the Russian perspective, it was an almost puzzling reaction. It seemed as if someone had suddenly flipped the switch on Germany's Russia policy. Security expert Dmitri Trenin wrote of a "turning point.” Instead of playing the role of an interpreter of Russian political language for the West, Germany had instead decided to "have the same attitude to Russia as all other countries in Western Europe,” he wrote. Putin, he went on, must have felt as though Merkel had delivered him a "stab in the back.” Russian political scientist Tatiana Stanovaya also believes that, "Putin takes this it a personal slight.

That might sound strange to German ears. It was Putin himself and his secret services, after all, that had set off all the alarm bells in the West. But in Moscow, people are baffled that the poisoning of a Russian citizen in Siberia, of all things, has led to a sea change in German policy – a case the German government voluntarily brought into the country when it advocated that Navalny be flown to Berlin’s Charité University Hospital for treatment.

"If there had been this strong a reaction from the German side in the Khangoshvili case, with the accusation: 'We can’t allow Russian secret service agents to do their work in Berlin,’ Moscow would have understood. In the case of Navalny, though, the reaction is incomprehensible for the Russian side,” says Fyodor Lukyanov, editor in chief of the publication Russia in Global Affairs.

Observers in Moscow were completely taken aback when German Foreign Minister Heiko Maas also hinted at repercussions for the Nord Stream 2 gas pipeline project that is being built from Russia to Germany. "I certainly hope that the Russians will not force us to change our position on Nord Stream 2,” Maas told the newspaper Bild am Sonntag in September. But what, many in Moscow wondered, does a long-term, multi-billion-euro project have to do with the fate of a single Russian opposition politician? Why is Germany escalating the situation and sacrificing its own interests in the process?

The answer Moscow has come up with can be seen in the appearances of Foreign Minister Sergei Lavrov, which have been extremely abrupt lately. It is rare in European politics for foreign ministers to talk about other foreign ministers the way Lavrov recently did about Maas's appearance at the Committee of Ministers of the Council of Europe, the EU body representing leaders of member states. Lavrov said Maas had been "unacceptable in tone, rude and undiplomatic.”

Lavrov explained his view of Germany’s role in the world at an annual meeting of the Russian International Affairs Council on Dec. 8. "The EU has given up its claim to become one of the poles in the multipolar world order,” he said. "It is totally oriented toward the U.S. Germany’s position on many recent issues shows us that this is Berlin’s desire – while at the same time wanting to maintain complete leadership in the EU.”

In other words: Germany is submitting to the U.S.. In Moscow's eyes, this is what the Navalny case and, particularly, the threat to Nord Stream 2 show. Because it is Washington that has wanted to stop this pipeline for some time now. "The Kremlin,” Trenin wrote, "will from now on view Germany as being controlled by the United States.”

In doing so, however, the Kremlin is overlooking another, more obvious reason for Germany’s policies. The truth, according to Editor-in-Chief Lukyanov, is that the current German-Russian antagonism is based on the rationale of European unification. The decisive event, he argues, was not Navalny’s case, but Brexit.

With Britain’s departure, he says, Germany has had to take responsibility for Europe. "And in that context, it became clear that Russia just wasn't that important anymore. The relationship with Russia has many aspects, good and bad, but they have nothing to do with the central task: building or perfecting a new EU." Russia has simply slipped down the list of German priorities, according to Lukyanov. Kortunov proffers a similar view: "Russian leadership has never quite realized how important the task of European unification is to Germany. If they had understood, they would have behaved differently.”

Now people in Moscow are arguing over how to deal with the reproaches from Berlin. Lavrov's brusque language comes across like a preemptive offensive. But his style is still too defensive for the hawks in the Kremlin, says political analyst Stanovaya. "For these people, in the Kremlin and in the intelligence services, diplomacy is an outdated tool. They believe that war has been declared on Russia, so there should be an end to the constant justifications. One of their representatives told me: We must carry out the attack on the territory of Europe."

This may explain the strange meeting at which Foreign Minister Lavrov spoke with representatives of the right-wing populist Alternative for Germany (AfD) party on Dec. 8, just after his speech about the state of the world at the Russian International Affairs Council. Lavrov spent nearly three hours with Tino Chrupalla, the co-head of the AfD. "I don’t think the initiative came from the Foreign Ministry," says Stanovaya. "Many of the diplomats there were surprised.” After all, just a short time before, Lavrov's ministry had presented a cautionary report on the glorification of Nazism by political forces in Europe. The AfD also made an appearance in the report. When it comes to historical narratives and the Nazi era, Russians are very sensitive. That Lavrov nevertheless agreed to the meeting shows the extent to which the Foreign Ministry has become an executive body. "It's gradually turning into Russia's press office," Stanovaya says. And this press office makes far harsher statements about Berlin than the Kremlin itself.

Whether or not the tone and relationship gets friendlier is ultimately up to Putin. "There is only one player on this field. As he decides, so it will be,” says Kortunov. And Putin continues to have a special relationship with Germany – it’s the only country he knows well, or at least thinks he knows well, through his time as a KGB agent in Dresden.

Putin has so far expressed himself in a markedly mild manner. At the Valdai Forum, a club of high-level Russian personalities, he spoke of Germany’s rise to become a "superpower” in October. And he has always blamed the revelations in the Navalny case on the U.S. intelligence services rather than the Germans.

A Wait and See Approach

Berlin's handling of Nord Stream 2 will now be an indicator for Moscow of how much independence Germany allows itself. Either way, the Kremlin has likely scaled back its own hopes for the project. "Gas pipelines no longer play the strategic role they had in the 1970s. Back then, they ensured peace and stability. Today, it is more the other way around," believes journalist Lukyanov.

And there is plenty of fodder for disputes that go beyond Nord Stream 2. There’s Moscow’s handling of the protests against dictator Alexander Lukashenko in Belarus, the court ruling in the Khangoshvili murder case expected in March, the faltering implementation of the Minsk Agreement in eastern Ukraine, the question of how Russian hacker attacks should be addressed and Russia’s actions in Syria.

Prospects for the more distant future are entirely uncertain. "A generational change is underway within the political elite in Germany, and politicians are coming to the fore who no longer believe that Germany owes Russia anything. For them, the world war and even reunification are distant history,” says think tank man Kortunov. The German-Russian reconciliation that took place after the war, which was anything but a matter of course, will continue to fade in memory.

Moscow will first need clarity about the degree to which Europe and the U.S. will reconcile again politically, and about which political forces will call the shots in Germany once Merkel's era ends. "It's a wait-and-see approach,” says Kortunov. 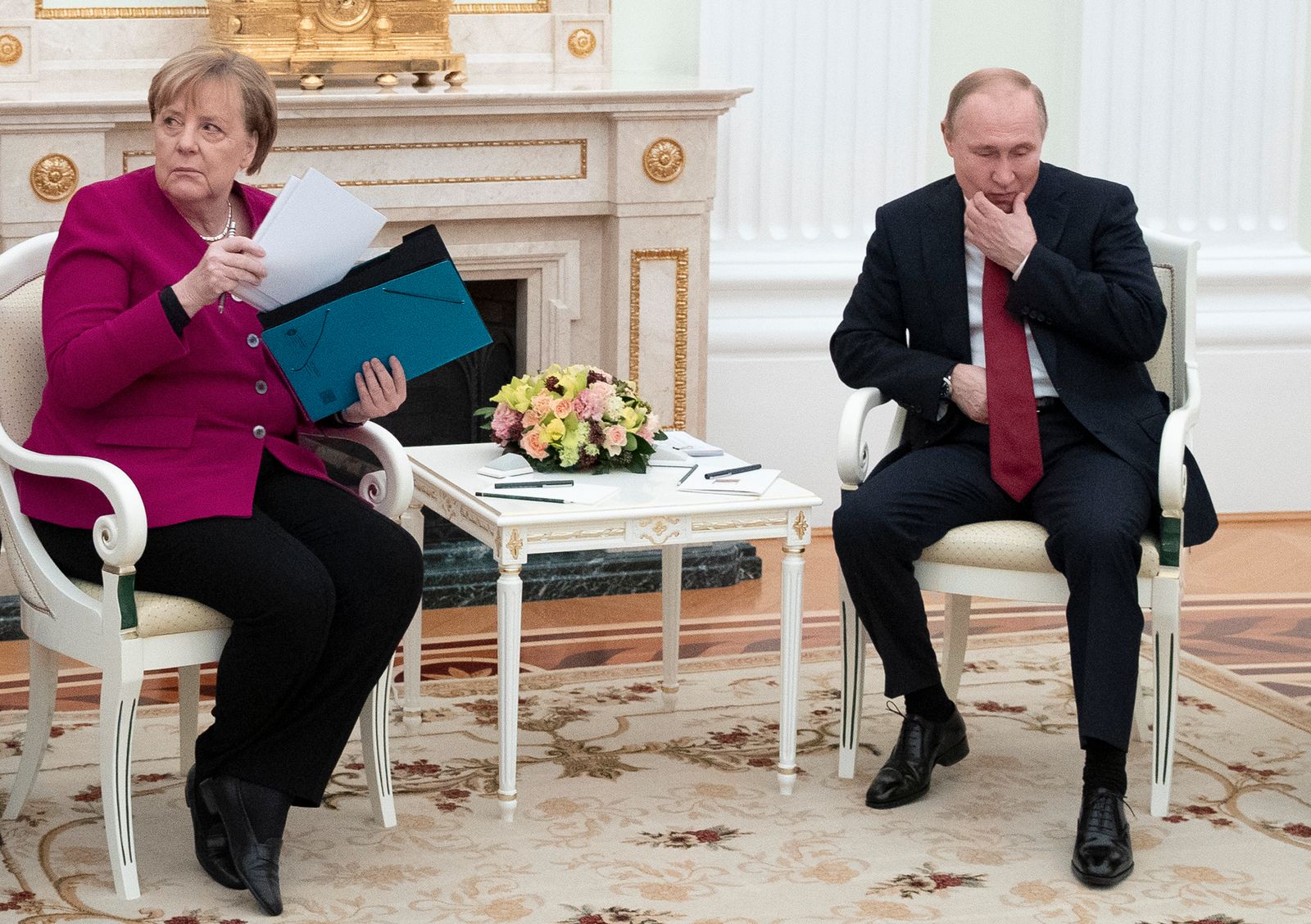 Merkel and Putin at the beginning of 2020 during their visit at the Kremlin: The relationship was burdened at the time, but not like it is today. 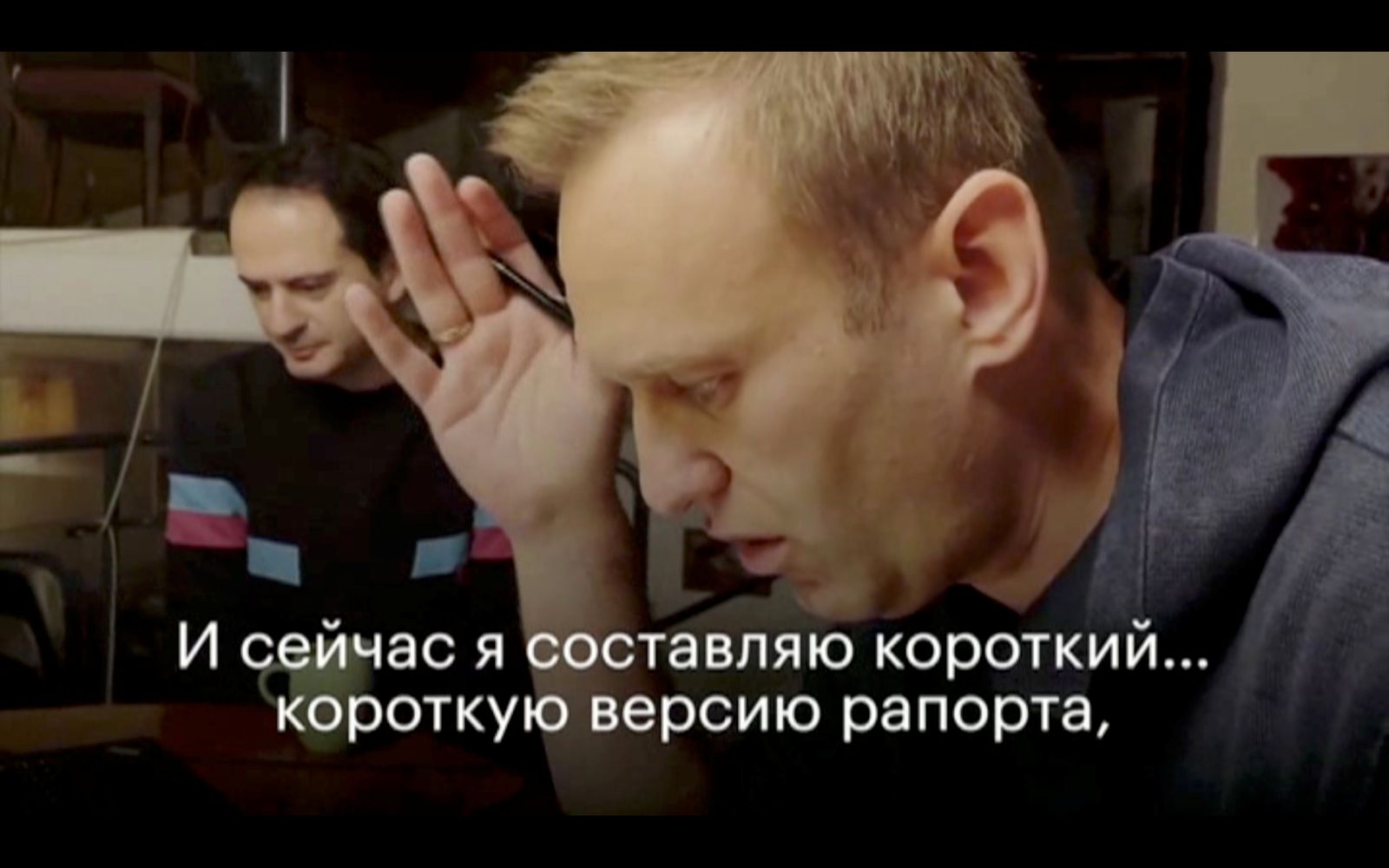