Martin Kobler is one of Germany's top officials dealing with crisis zones around the world. He's also one of the country's leading diplomats at the United Nations. The 62-year-old has led UN missions in Afghanistan, in Iraq and most recently in the Democratic Republic of Congo. The UN appointed him in November to lead its support mission for civil war-torn Libya, where he is seeking to bring the country's divided factions together into a unity government. December's Skhirat agreement aimed at establishing that government of national unity marked his first success in the position. So far, however, it has done nothing to stop the spread of the Islamic State (IS) in the country.

SPIEGEL: Mr. Kobler, your job right now -- to bring unity and peace to Libya, as you already did in eastern Congo -- isn't exactly an easy one. Which mission do you find harder?

Kobler: In Eastern Congo we were dealing with a region that had no state authority, just as we are seeing in Libya now, only the situation here is far more complex. The country is under militia rule, there are two parliaments and governments, in the west and in the east, and the Islamic State is spreading in the areas between. Libya is very fragmented -- far more so than eastern Congo.

SPIEGEL: Many have written Libya off as being a new Syria, a country entangled in a barely comprehensible conflict between militias, partly under IS control, a "failed state" which can no longer be saved.

Kobler: We simply can't give up on Libya. There are 6 million people living there and we need to help them. Of course, the presence of IS there is also a threat to Europe. Libya is an Arab country, an African country, but also a country with very close ties to Europe. My goal is to prevent Libya from becoming the next Syria. That will require the political process that we have initiated -- and which is now finally beginning. But we will not be able to save Libya without the Libyans.

SPIEGEL: It took over a year of negotiations under the tutelage of the United Nations in Skhirat before a deal was reached in December, but now the internationally recognized parliament in Tobruq just voted against the unity government. Do you not see this as a bad sign?

Kobler: I see it differently. Tobruq did in fact recognize the agreement. They may have rejected the concrete composition of the government, but they did so within the scope of the agreement. What needs to be discussed now is what the cabinet should look like and how the number of ministers can be reduced from 32 to 17. That was one of the points of criticism. But that is a political process.

SPIEGEL: Ultimately, the negotiations always collapse because of details like that. Is there really a serious intention of working together?

Kobler: There are now three urgent reasons for a political agreement. The first is the spread of IS. The second is the miserable condition of living: 2.4 million Libyans are reliant on humanitarian aid, with 1.3 million requiring food assistance -- and this in a rich country! The third is the financial situation at the central bank, whose reserves have shrunk enormously, from $280 billion (251 billion euros) in 2011 to just $50 billion, largely due to the drastic decline in oil production. It is a question of time before Libya runs out of money. All these things put pressure on the politicians.

SPIEGEL: Yet the divided parties still seem to be fighting each other more than IS.

Kobler: Yes, unfortunately. To my Libyan dialogue partners, who discuss commas in agreements and bring legal arguments into play, I say this: That is all important, but IS doesn't discuss commas -- it is capturing new territory each day. Last week, its fighters reached the oil terminal at Ras Lanuf. If things keep going like this, they will soon capture it. But the awareness that people need to be coming together to counter this threat is still lacking. My fear is that the political process will progress more slowly than the military process.

SPIEGEL: Can IS in Libya still be defeated, even with an agreement?

Kobler: Yes, but there isn't much time left. We are seeing it expand its sphere of influence from Sirte on the coast to the east, west and south. There are already bridgeheads and cells in the south, and if Islamic State is allowed to join forces with terrorist organizations in Niger and Chad, then it will be very, very difficult to push it back. We are already now witnessing a closing of ranks of IS with criminal groups from sub-Saharan states that are controlling the human-trafficking business, which IS plays an increasing role in.

SPIEGEL: IS has recently been weakened in Syria and Iraq, which is apparently why it is shifting its activities to Libya. Is the country becoming its operations center?

Kobler: It's obvious that the military pressure against IS in Iraq and Syria can lead to Libya becoming a new gathering place for terrorists. Most of the 2,000 to 3,000 fighters in Libya today are already foreigners.

SPIEGEL: The US is considering conducting air strikes in Libya against Islamic state. What would that achieve?

Kobler: I am not familiar with these plans. Ultimately, however, it is the Libyans who must fight against IS. As the past has shown, air strikes alone do not defeat terrorists. This is a battle for oil fields and refineries, a battle for cities and strategic positions -- and for that you need ground troops. But I see no readiness on the part of the international community for that kind of engagement. That's why a unity government as well as a strong security infrastructure needs to be built up quickly. The Libyans themselves must go into battle against IS. If they then choose to accept help from abroad, it will be a sovereign decision made by this government. But they have to take the first step.

SPIEGEL: So far there have only been militias in Libya. How are they supposed to defeat a highly organized IS?

Kobler: The army has to be completely rebuilt -- otherwise it can't work. Libya isn't Iraq, which has a 5,000-year military history it can look back on. There is no basis here. For 42 years, Muammar Gadhafi maintained an illusion of statehood that never existed, neither in a political nor a military sense.

SPIEGEL: Germany is considering sending officials with the Bundeswehr, the country's armed forces, to provide training for Libyan security forces -- initially at facilities in Tunisia. Will that be enough?

Kobler: A training mission is necessary -- and the Bundeswehr could play a crucial role here. If Germany and other countries would be ready to do that, it would certainly be good.

SPIEGEL: Is it sufficient to train a few soldiers? After all, that may take years to do.

Kobler: Of course it won't be enough. We have a strong tendency to always want to have a complete plan first. In that sense I'm more pragmatic. Why don't we start by training 5,000 police officers and soldiers. Then we can see how the security situation improves. Libya has a dangerous political and military vacuum that urgently needs to be filled.

SPIEGEL: The fifth anniversary of the Arab Spring is upon us, which also led to an uprising in Libya in February 2011. In Germany, many now believe it was wrong then to have supported rebels with air strikes against the regime. Do you think so too?

Kobler: I think it was a mistake to have left Libya alone after 2011. We got ahead of ourselves. And that is precisely why it is so important now that we not abandon the country again. We need preventative policies. This is apparent in Syria and in Iraq where we are frantically playing catch-up. If we hadn't mediated the Skhirat deal in December, then Libya would be much more deeply divided today. There's also no guarantee that it will work, but at least we have established a path. Finding a solution to this conflict is a question of political will. Those in power must put their personal power ambitions on the back burner and recognize that they are destroying their country. We must support them in this process.

SPIEGEL: Do you believe such an awareness even exists? From the beginning of the revolt in 2011, there were worries that the country could disintegrate into clans and tribes because it has never had a democratic, pluralistic culture before.

Kobler: I'm not so pessimistic. The tribal elders may not make decisions according to our understanding of a democracy, but they do discuss things until they reach an outcome. They have a natural inclination toward consensus, so why shouldn't we be able to apply that to the national level?

SPIEGEL: Dozens of activists, lawyers and journalists have been murdered and many others have fled. How will it be possible to form a civil society there?

Kobler: It will be difficult, but we have to support this process. We are concentrating on two elements of civil society: youth and women. I have called publicly for 30 percent of the new ministers to be female. That didn't happen -- there were only 6 percent in the end. But it is nevertheless important to promote such things.

SPIEGEL: What's your perception of the people in Libya? Do they still have hope?

Kobler: When I visit Tripoli, Bayda or southern Libya, I sometimes go to the markets to shop and talk with the people. They all say: We need security. They want to be able to send their children to school without them getting kidnapped along the way. They want to be able to go to the hospital and not have to buy their insulin privately. Everyone is united in their view that things cannot go on this way.

SPIEGEL: It seems as though the only mission that could be even more complicated than yours is that of Staffan de Mistura, the UN special envoy for Syria. Do you ever speak to him?

Kobler: I know Staffan de Mistura well. I worked under his wing as deputy UN special representative in Kabul. We are in close contact -- and we both share the conviction that there is a solution to every problem. 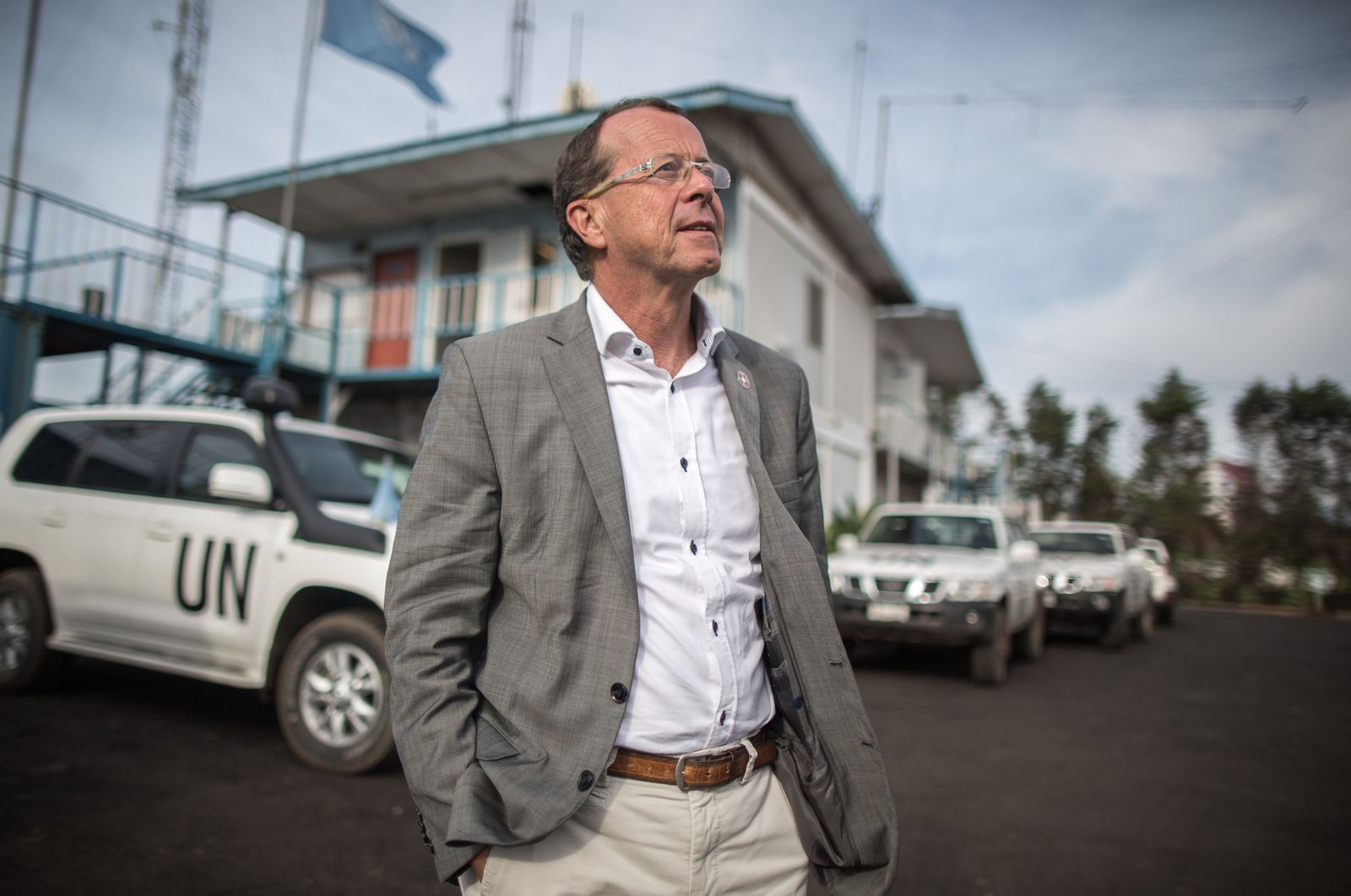 Martin Kobler, the UN's special representative for Libya, is one of the top German diplomats at the global organization.