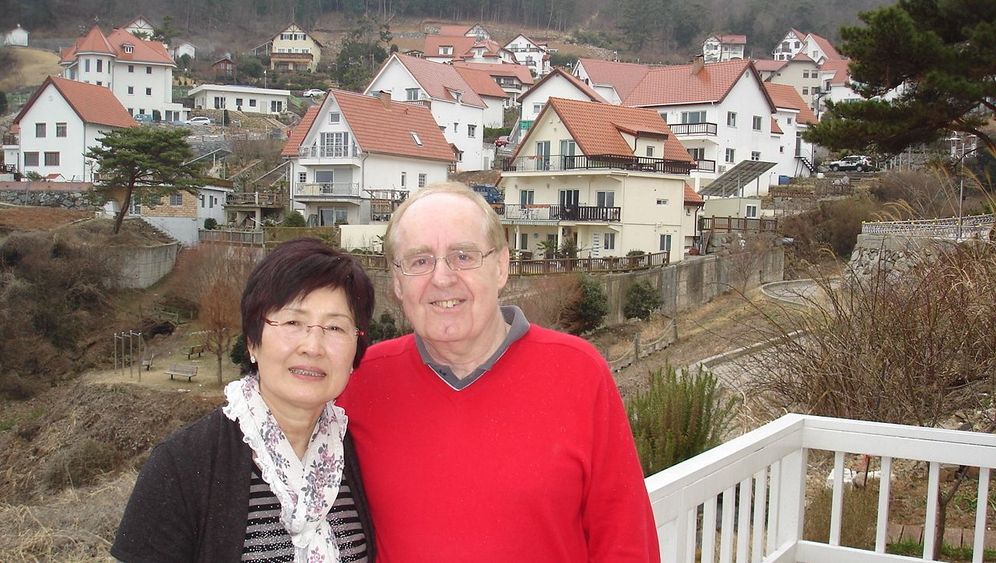 Buim Ulmer's latest meeting about the Oktoberfest ran longer than planned. It will be the third time that she and her neighbors host a local version of the notorious beer-swilling fest, and this time the party could exceed all of their expectations.

During their first Oktoberfest, she and her friends had 1,000 Bavarian weisswurst (white veal sausages) and all went smoothly. Then, last fall some 30,000 sausages were sold.

"We never had imagined such crowds," said the 65-year-old nurse. "We were stretched to our limits." That is not surprising. It is hard to cater to the demand for Bavarian specialties when you are in a small village near the South Korean coast.

Buim is South Korean. She and her husband, Ulrich, 64, a German elementary school teacher from the city of Bielefeld, spend most of their time on Namhae, an island of tranquility not far from South Korea's second largest city of Busan in the southern part of the country.

The Ulmers live in the "German Village." And the place lives up to its name. It has whitewashed houses, red-tiled roofs, neat gardens and rows of shoes lined up outside the front doors. Between signs for "Heidi House" and "Hamburg House" stands a road sign limiting drivers to 30 kilometers per hour (19 mph).

The Ulmers' neighbor, a butcher, stocks German smoked sausages and bratwurst. Near the entrance to the village there is the Café Bremen, named after Germany's northern port city. The only things missing from this archetypal German village are the traditional garden gnomes -- apparently they got stolen too often.

Of course, they also need to have an Oktoberfest for three days in the fall. This time they are expecting more than 10,000 vehicles to converge on their village for the event. South Koreans love beer and are particularly partial to German brews.

"Where can all the cars go?" asked Buim. Their village is nestled on a steep hillside with a network of narrow, winding streets.

Buim came to Germany in 1970 when she was 23. She was one of 10,000 nurses from South Korea who were sent by their government as part of a pragmatic exchange: The young Koreans did their bit for the German economic miracle while, in return, Germany offered Seoul's government cheap credit.

Nurses like Buim's neighbor Wou Chon Ja were paid a monthly net wage of 570 German marks, which was 10 times what they would have earned at home. They also got free food and accommodations.

"I lived on 70 marks and sent 500 marks home every month," said the 74-year-old. Some 40 years later, local authorities in South Korea thanked the former "guest workers" by offering them discounted plots of land on the slopes leading down to the Sea of Japan.

'I Didn't Want to Take My Homesickness to the Grave'

The village now has 35 houses, all inhabited by returnees from Germany and their families. Three German men have retired to the community with their South Korean wives. Six other German-South Korean couples spend about nine months on Namhae and travel to Germany during the winter.

Ulmer met his wife at a dance in 1971 and they married a year later. "With good things you have to move fast," he said. They had two children and traveled a lot.

Ulmer worked as a teacher in Peru and Portugal, but their home base was always Germany. By 2006, the Ulmers were ready to move back to South Korea. "It was time to spend a few years here," said Buim. "I didn't want to take my homesickness to the grave."

The residents have similar life stories and cite the same reasons for relocating to South Korea: A beautiful location by the sea, better air, a mild climate and the search for their roots. "But we didn't get anything for free," said Wilhelm Engelfried, 82.

They live a good life in South Korea, a good German life, but not everything is perfect. The neighborhood disputes, for example, are the same, the quarrels about cleanliness, law and order. Meanwhile, some want to have a German enclave on the South Korean coast, with German cultural values. Others reject such plans. "We cannot turn this into a German province," Engelfried said.

The atmosphere is particularly tense during the summer. Traffic backs up the whole mountain and along their narrow streets, as tens of thousands of curious South Koreans descend on their settlement.

The "German Village" is a sensation in South Korea. Its inhabitants were featured in a documentary film, "Home from Home" ("Endstation der Sehnsüchte"), which premiered at the 2009 Berlin Film Festival. Locals are stared at, photographed, flooded with questions and their peace and quiet is disturbed.

Uninvited visitors trample through their front yards, walk onto their terraces, and sometimes even venture into their living rooms. "It's like a museum village," said Engelfried. He, unlike some of his neighbors, can still see the funny side of the intrusions.

Herr Willi, as everyone in the village calls him, had wanted to stay in the village for "at least five years, more like 10." Now, those years are over and he still doesn't want to go back to Germany.

"It would hurt me to leave here," he said. His South Korean wife, on the other hand, would like to leave for Germany sooner rather than later. "What should I do here if he gets sick?" she asks. "How should I take care of him?"

'We Have No Home'

The German Village is an upside-down world. Many struggle with the idea of "home."

"My home is where my wife is," said Ulrich Ulmer. But his wife sees things differently. "We have no home, there is always something missing," she said.

Now, 40 years after she left Germany, she is finally back where she grew up and has her roots -- but it is still not her home. She speaks Korean, "as it was spoken 40 years ago," she said. She doesn't really feel right in her home country, she said.

"Fortunately," said Buim, "I live in a ghetto."