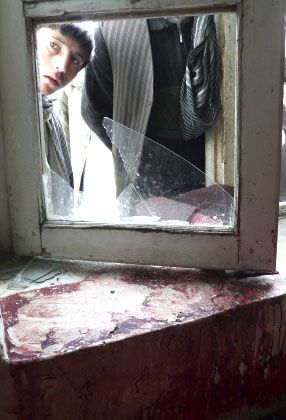 An Afghan boy looks through a broken window at the site of the raid in Imam Sahib.

The American forces were tricked by a drug clan into taking out a rival as part of an operation to seize an al-Qaida member. Now German soldiers are paying the price for the operation's civilian casualties.

The raid took place on March 21 in Kunduz province, where German forces are helping with security and reconstruction. A US liaison officer asked the German reconstruction team to keep the Kunduz airport clear but said nothing about the impending mission. Around half an hour later, a Hercules transport aircraft landed at the airfield, together with a whole fleet of combat and transport helicopters, which then took off for the nearby town of Imam Sahib.

There, the Americans stormed a guesthouse belonging to the local mayor, who had previously been friendly towards German forces, killing his driver, cook and bodyguard, as well as two of his guests. The US commandos also seized four people. According to the US military, one of those captured was the "target" of the operation, a "high-ranking" member of the terrorist organization al-Qaida.

However, sources in the intelligence community have told SPIEGEL that the US forces were apparently used by a drug clan to take out one of its rivals, who was reportedly one of the men who was killed or detained. The tip-off regarding the location of the al-Qaida terrorist had come from a source close to a member of the Afghan government in Kabul who is reputed to be deeply involved with the illegal drugs trade in Afghanistan.

Politicians and members of the German military in Berlin have been sharply critical of the incident. The resentment of the local population regarding the civilian victims of the US attack is now directed against the previously popular German ISAF troops, they say. A further criticism is that the unilateral mission could also have posed a threat to Bundeswehr patrols in the area.

Germany currently has around 3,500 troops in Afghanistan as part of the NATO-led International Security Assistance Force (ISAF), based in the relatively safe north of the country.