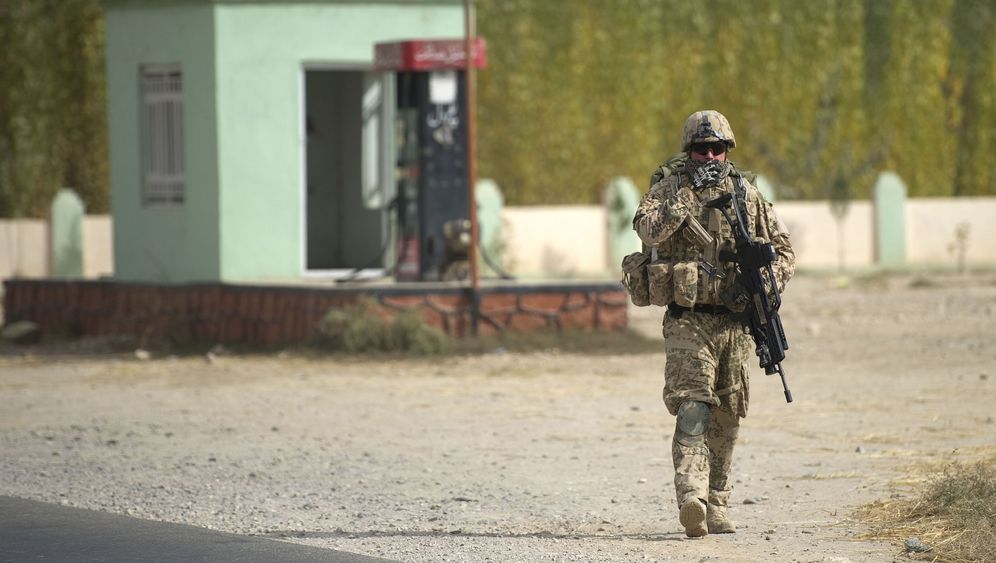 The building complex is enormous and its reputation is legendary. Afghanistan's intelligence service, the National Directorate of Security, or NDS, operates its own prison in the middle of Kabul. The country's most important prisoners are sent to the facility in the city's Shash Darak quarter. One of them is Mullah Abdul Rahman, the Taliban leader and shadow governor of Kunduz Province, who was captured a week and a half ago.

No one is willing to say whether the gaunt, bearded man is locked up in solitary or if he is being held in a group cell. Those who have spent time in the NDS prison describe it in various ways. Some mention torture, while others say that anything can be had there in return for a bribe, even freedom.

That is precisely what the German government wants to prevent, because Abdul Rahman is "its" man. Immediately after his arrest, German Ambassador Rüdiger König paid a visit to the Afghan government and explained how incredibly important it is to try and convict Rahman.

Abdul Rahman is the face of the enemy, at least for the Germans stationed in Afghanistan. More than any other Afghan, he symbolizes the ambivalence and difficulty of the German mission in the country. Rahman was behind the hijacking of two tanker trucks that became stuck on a sand bar in the middle of a river near Kunduz in September 2009, an incident that ended with a devastating air strike and the death of almost 100 people.

The German commanding officer in Kunduz, Colonel Georg Klein, had ordered the strike on the tankers, which killed local residents who had come to the sand bank to tap the fuel from the trucks. With the exception of a few Taliban, most of the victims were civilians. The Afghan informant who notified the German special-forces unit, the KSK, of the tankers' presence had insisted that the people at the sand bar were only Taliban. It was a brazen claim, for which he was paid $1,500, but it became even more devastating when Colonel Klein, who was about to be promoted to general, believed it.

The incident led to the resignation of then Defense Minister Franz Josef Jung, a member of Chancellor Angela Merkel's Christian Democratic Union (CDU), and to the formation of an investigative committee. For Rahman, on the other hand, it suddenly meant advancing from his role as a village commander to a major figure within the Taliban.

On Nov. 4, 2009, the Germans placed him at No. 2242 on NATO's so-called Joint Prioritized Effects List, a very special list of wanted individuals. It includes more than 4,000 people, most of them Taliban commanders or presumed terrorists with other groups, complete with photos. Some, like Rahman, are merely on a wanted list, while the letter K, for "Kill," is listed next to the names of others, meaning that they can be eliminated at any time.

Immediately following the incident, Taliban strategists treated the blunder by the German military, one of the bloodiest NATO operations to have taken place in Afghanistan, as a great propaganda coup. An order was issued in Quetta, Pakistan, where elements of the Taliban leadership are in hiding, that Rahman was to be treated as an important commander in the Kunduz region from that point on. Combatants were assigned to him and he was expected to plan new operations.

Which, according to the German government, he soon did. Berlin accuses the mullah of having struck back on Good Friday in 2010. Rahman is thought to have been one of the organizers of a deadly ambush in the Chahar Darreh district, in which three German soldiers were killed: Sergeant First Class Nils Bruns, Corporal Robert Hartert and Private Martin Augustyniak.

Bringing those responsible for the attack to justice is a priority for the Germany government, partially because of its symbolism. Berlin wants justice to be done for the families of the three soldiers by putting Rahman behind bars for many years, provided the charges against him can be substantiated. Berlin is even thinking of filing a request for his extradition, an indication of how serious the Germans are about the case. "The treatment of arrested Taliban is a challenge that the Afghan judiciary must face," says German Economic Development Minister Dirk Niebel.

But proving Rahman's guilt may prove difficult. The Federal Public Prosecutor's Office in Karlsruhe is currently examining whether the evidence is sufficient for an arrest warrant, which would serve as the basis for an extradition request. The facts that have been presented so far, however, are insufficient.

Like so many Taliban field commanders, Rahman fled to Pakistan in the winter of 2010, after almost half of the Taliban commanders in Kunduz had fallen victim to American operations within only one year. From there Rahman, a Pashtun, commanded sub-commanders in the region and allegedly recruited suicide bombers and instructed Afghans to make roadside bombs. He made periodic trips to Afghanistan.

The mullah knew that the tanker-truck incident would change his life. When he met with a SPIEGEL reporter in January 2010, he feared an attack by the US military or a deadly drone attack at any moment. But he also felt flattered that Western journalists were interested in him.

In short telephone conversations, Rahman gave the reporter directions to a busy market in Baghlan, an hour's drive south of Kunduz. Since the abduction of the tanker trucks, he had replaced his SIM card several times to avoid being tracked. Suddenly Rahman, covered with a green blanket, appeared and knocked on the window of the Toyota. When he sat down on the back seat, the car was suddenly filled with the pungent odor of sweat. He seemed less like a powerful commander than someone who was on the run. He stared out the window as he spoke quietly about the day of the attack. "It was a huge mistake," he said at the time. "Now I'm being hunted down by foreign soldiers."

Later, when Rahman was presumably in Pakistan, German military surveillance teams repeatedly heard his name being mentioned. In August 2011, an informant told the Germans that the mullah was planning an attack using suicide bombers on public buildings in Kunduz. The Bundeswehr spent two months intercepting telephone conversations, which indicated that Rahman had passed on explosives to two bomb-makers.

The BND, Germany's foreign intelligence service, achieved the critical breakthrough a week and a half ago. Rahman had just returned to Afghanistan from Pakistan. He was hiding, together with two of his followers, in the village of Ghunday Kalay near Kunduz when German elite soldiers launched their attack. Under cover of darkness, about 30 KSK soldiers and 60 Afghan troops they had trained encircled the small farmhouse, surrounded by high mud walls, before breaking down the doors and storming the courtyard. Rahman, wrapped in wool blankets, didn't resist arrest. Since January 2011, 19 similar arrests had resulted from tips coming from the German intelligence service. Rahman is number 20.

Since then, the German government has supported Kabul in its handling of the Rahman case. The German Embassy is currently collecting evidence that will be passed on to local prosecutors -- because even if an extradition request is made, it's unlikely that the prisoner will be sent to Germany.

Still, Berlin is eager to avoid a repeat of a past humiliation. In May 2009, the KSK arrested another Taliban leader and flew him to Kabul. The trial dragged on, and in the end he was given a mild sentence instead of a long prison term. In the context of an amnesty in the summer of 2011, the prisoner, a presumed murderer, was released and became a free man.

There was some confusion last week, however, stemming from the news that two Taliban commanders named Abdul Rahman had been captured in Afghanistan, one by the Germans and the second one by the NDS, near the Pakistani border.

One of the two men is the shadow governor. While the Bundeswehr is absolutely certain that they arrested the real one southwest of Kunduz, Afghan security officials are not as convinced. Acquaintances of the shadow governor, a former United Nations employee and Asadullah Omarkhel, the local provincial head of the "High Peace Council," believe that the man the NDS picked up near the Pakistani border is the real Rahman. He reportedly returned from Pakistan recently, using an assumed name, after taking his sick son to Peshawar for treatment. On the way back, he apparently received a new driver south of Kunduz who was in fact working for the NDS.

Even if this is true, one of the men now in custody is undoubtedly the shadow governor.

But what does Rahman's arrest mean for northern Afghanistan, a region in which German politicians like to claim the situation is stabilizing? Last Friday, when Rahman was already in prison, a suicide bomber in a police uniform blew himself up in front of the mosque in Maimana, the capital of Faryab Province in northern Afghanistan. The explosion killed 41 people. It was one of the most gruesome attacks of the last few years.