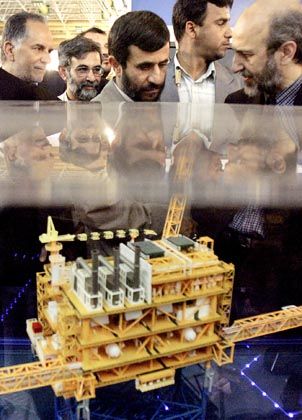 Iranian President Mahmoud Ahmadinejad at a trade fair in Tehran in 2006. Germany is taking another look at its economic ties to Iran.

The group of dignitaries from Tehran visiting Hamburg last Wednesday seemed noticeably pleased -- and it wasn't just the unseasonably warm weather. They had spent the morning attending a board meeting of the Iran-Europe Commercial Bank. The mood couldn't have been better.

The Iranian government bankers enjoyed the spectacular view from the bank's penthouse-level conference room as much as they did hearing its latest quarterly results. Indeed, before adjourning to the adjacent room for Persian delicacies, management reported the best results in the bank's history.

Even the representative from the German Financial Supervisory Authority (BaFin) seemed impressed. Now that all major German banks have given in to pressure from the United States government and stopped doing business in Iran, business is booming for the Hamburg-based Iranian bank. Its commercial loan portfolio, worth about €3 billion ($4.4 billion), is twice as large as it was last year.

Machinery exporters and trading companies have practically been lining up to move their business from their traditional German banks to the Iranian bank, despite the fact that the US Treasury Department has blacklisted Iran-Europe Commercial Bank, together with two other major Iranian banks, Bank Melli and Bank Saderat. Ironically, Iran's state-owned banks are among the few businesses that have actually benefited and managed to turn a profit from tighter international sanctions against Tehran.

If German Chancellor Angela Merkel has her way, though, this niche business will soon come to an end. During a visit to US President George W. Bush's ranch in Crawford, Texas, two weekends ago, Merkel promised her host that her government would apply stronger economic pressure on the regime of Iranian President Mahmoud Ahmadinejad. Merkel hopes that harsh economic sanctions will force the country's ruling mullahs to finally abandon their controversial nuclear program.

The German government, Merkel announced, would "take another look at German companies' economic ties to Iran." She added that she plans to maintain an ongoing dialogue with German industry on the matter "as we are already beginning to do today."

Merkel's statements were everything but clear, and yet Bush seemed eminently pleased with the chancellor's convoluted language.

The US president was "overjoyed" by Merkel's words, his office later announced, adding that the White House welcomed her newly toughened approach. Bush was pleased that Merkel, instead of focusing on the interests of German industry and her Finance Ministry, wants to see tighter sanctions imposed on Iran.

According to the White House, Merkel also promised Bush that her administration would take a closer look at German companies supplying Tehran with the kind of sophisticated machinery the Iranians are eager to acquire -- an issue that is especially important to the Americans.

The Chancellery also chalked up Merkel's trip to Texas as a great success. The US president, officials in Berlin insisted, had assured Merkel that he is now committed to pushing for a diplomatic solution to the Iranian problem. The military option remains on the table, but only as a deterrent.

Only a few days later, during a routine consultation between senior officials in the German and French governments, Merkel and French President Nicolas Sarkozy explored ways to put together a European alliance of countries willing to participate in the boycott. The Europeans' main goal is to prevent a US military strike, which they believe could have more catastrophic consequences than an Iranian nuclear program.

Western intelligence agencies like Germany's foreign intelligence service, the Bundesnachrichtendienst (BND), are convinced that economic reasons alone are enough to rule out an attack. The price of oil would explode, providing Tehran with the cash it would need to repair any damage inflicted in an attack.

However, many in Berlin doubt tougher sanctions would be enough to force Tehran to come around on the nuclear issue. They are merely the price of keeping the Americans peaceful.

The catch-22 in Merkel's pledge is that the plans she proposes are difficult to implement, and the German government has little latitude. Government experts warn against further reducing or even eliminating so-called "Hermes covers" -- export credit guarantees that protect German companies from non-payment by foreign debtors -- for business transactions with Iran, as the Americans are demanding. Although Berlin reduced the government export credit guarantees from €900 million last year to the current level of €500 million, canceling the Hermes guarantees altogether would be risky.

In Berlin, senior government officials fear that, if the guarantees were eliminated, Tehran would no longer have any reason to repay what it already owes. At issue are receivables totaling roughly €5.5 billion, and not collecting on these debts would drive many German companies into bankruptcy. The government would have to jump in to prevent this from happening, which would impose an unacceptable burden on its budget.

Closing the Iranian banks' German offices isn't as easy as the Americans imagine, either. Before this could happen, the European Union would require a United Nations resolution stating that the banks are funding the nuclear weapons program Iran is believed to be developing.

EU member states would only be permitted to take action against the relevant Iranian companies if the UN adopts the necessary resolution. Although the resolution is pending before the UN Security Council, it hasn't been adopted yet. Bank Melli, which maintains an office in Hamburg, already appears on a list of companies to be slapped with additional government sanctions prepared by the political directors of the British, French and German foreign ministries. 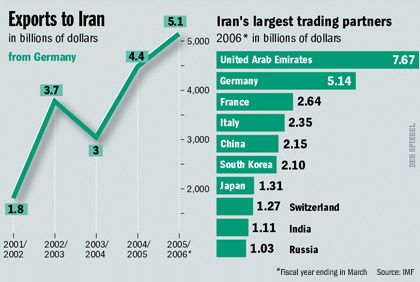 Merkel and her staff are hoping to convince German companies to "limit their business voluntarily." According to a member of Merkel's staff, "the heads of these companies should consider whether new business deals with Iran are truly opportune." The federal government has already succeeded in convincing two large German companies, Deutsche Bahn and E.on-Ruhrgas, to cancel major projects with the mullah-controlled state.

The Merkel administration's approach is controversial in German industrial circles. "We can't limit our business simply because a politician happens to have made a promise to someone," says a senior executive at a pharmaceutical company. "On what legal grounds?"

US government pressure on German corporations and banks is also causing legal problems for the companies in question. By agreeing to participate in a boycott against a foreign country, German businesses would be in violation of foreign trade legislation enacted in 1993. The new laws were introduced because a number of Arab nations had demanded that their trading partners refrain from doing business with Israel. Many companies, fearful of losing their Arab business, caved in and signed the statements their Arab trading partners were demanding. To prevent this from happening in the future, German lawmakers enacted the 1993 legislation, which imposes fines of up to €500,000 on offenders.

By giving in to American pressure, German companies would find themselves in a legal gray area. "It isn't exactly that they're making overt threats," says one German banker, "but they have certainly expressed their wishes and made subtle suggestions. Every banker knows that his bank would run into a lot of problems in the United States if he ignored these wishes."

Many German Companies Are Playing it Safe

The new lack of political and legal clarity when it comes to doing business in Iran has led to a general feeling of ambiguity among German executives. What is allowed, what isn't allowed and what will soon be banned? Applications for export permits are piling up at Germany's Federal Office of Economics and Export Control (BAFA) in Eschborn, outside Frankfurt. 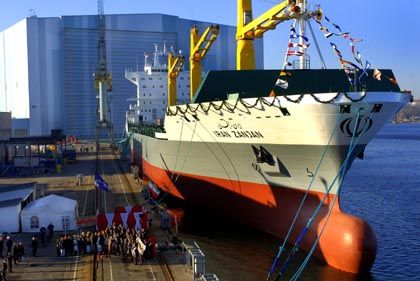 This ship, built in the northern German port city of Wismar, is intended for export to Iran.

To play it safe, German companies are now even reporting harmless Iranian business deals. The number of permits issued by BAFA for products that can be exported without restrictions has jumped from 377 to 1,300 currently, while another 600 applications have been submitted to the agency but not yet processed.

"We're paying special attention to applications involving Iran, which of course increases the processing time," says a BAFA spokeswoman. To complicate matters, sensitive cases must first be cleared with the Federal Economics Ministry, the Foreign Ministry and, in some cases, the BND.

The lengthy processing times act as an indirect embargo. Wilfried Kroppen has been trying unsuccessfully for months to ship three tunnel-drilling machines to Iran for use in water projects. "The worst thing is that you don't get a clear answer," says Kroppen, the managing director of Wirth, a manufacturer of high-tech drilling equipment based in Erkelenz in northwest Germany. "This sort of uncertainty is very difficult for small to mid-sized businesses to handle financially, and it also jeopardizes jobs."

The German government-owned development bank, the Kreditanstalt für Wiederaufbau (KfW), has also drastically reduced its Iran business. "The KfW did not enter into any new business relationships in Iran in 2006 and 2007," says a spokesman, adding that the bank's only current dealings with Iran involve old export financing agreements worth about €350 million.

Major suppliers of industrial services such as MAN Ferrostaal have been especially hard-hit by the new policies. The company, based in the western German city of Essen, is currently involved in three major construction projects in Iran: a power plant and two facilities for the petroleum industry. "The banks' withdrawal from Iran makes it more difficult for MAN Ferrostaal to do business in this country," says a spokesman for the company. According to the spokesman, these difficulties apply to both new projects and the completion of current contracts. MAN is now using the services of the Iran-Europe Commercial Bank. 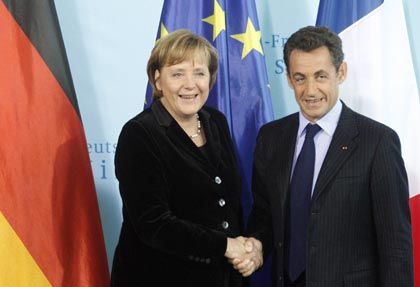 Political partners Merkel and Sarkozy: an alliance of the willing

Other large German corporations are now demonstratively downplaying the scope of their involvement in Iran. For electronics conglomerate Siemens, "it only amounts to a few hundred million in sales," say officials at the company's Munich headquarters. A spokesman for steel giant ThyssenKrupp says that the company's annual shipments to Iran amount to "less than €100 million euros."

But what the spokesman fails to mention is that the Iranian government still holds a large packet of shares in ThyssenKrupp. The securities are held by the Iran Foreign Investment Company (IFIC), a holding company set up to invest the country's oil revenues around the world.

After the Americans intervened, Tehran was forced to give up its seat on the ThyssenKrupp supervisory board years ago and reduce its holding in the company. But, as the 2006 financial report of IFIC's Düsseldorf office reveals, the Iranians have far from divested their holdings in ThyssenKrupp.

For its current 4.5-percent share in the company, the Iranian state collected €18.5 million in dividends for this year alone. It uses some of its German stock earnings to finance loans to companies with business in Iran, including a German charter airline that received a $55 million loan in 2005.

Meanwhile, the reaction to pressure from Washington has been met with gallows humor in many Western capitals. A senior European diplomat in Berlin recently insisted that his government would strongly advocate the expansion of sanctions on Iran. But when asked whether he believed the sanctions would work, the diplomat sighed and said: "Well, I wouldn't exactly bet my salary on it."

During an earlier visit to the White House, the chancellor was more strongly opposed to such far-reaching sanctions. To reinforce her argument, she told Bush about her experiences in the former East Germany. Everyone was in favor of sanctions against the bigwigs at the SED, East Germany's ruling communist party, said Merkel. But when the sanctions affected ordinary citizens and oranges started disappearing from store shelves, it became clear that the effort was not having its desired effect. Bush's insightful response to Merkel's story? "Really, you got no oranges?"