Last Wednesday, German Interior Minister Thomas de Maizière paid a visit to his colleague in the Foreign Ministry, Frank-Walter Steinmeier for a strictly confidential conversation about the currently tense relationship with the United States. Specifically, they planned to address the latest spying revelations and accusations. Before the meeting began, both ministers turned in their mobile phones. Foreign Minister Frank-Walter Steinmeier has a small side room he uses for this purpose; part of the Foreign Ministry is in the former Nazi Reichsbank and has very thick walls. The room is now used to store smartphones and tablet computers when sensitive discussions take place.

The precaution reflects the significant disquiet and anxiety in Berlin's ministries and in the Chancellery as the summer holidays get underway. Slowly, ministry officials are starting to grapple with the true meaning of "360 degree" counterintelligence. It means defending yourself not just usual suspects like Russia or China. But also against Germany's closest allies, particularly the United States.

A few days ago, Chancellor Merkel reportedly told US President Barack Obama in a telephone conversation that anger over the US spying activities in Berlin's government quarter as well as the recruitment of an informant inside Germany's Bundesnachrichtendienst (BND) foreign intelligence service has in no way subsided. Because Obama apparently expressed little understanding for the commotion in Germany, Merkel is now taking action.

The only thing she is lacking is a solid plan.

Thus far, most ministries are going it mostly alone when it comes to addressing the espionage threat. Some are having their internal networks tested for security problems while others have issued new rules of conduct for their employees. Still others have taken no concrete steps aside from increasing general vigilance.

But cryptophones are being used more frequently by members of Merkel's cabinet these days. They're more intricate than normal mobile phones, but they also provide better protection against eavesdropping. Some have even avoided sensitive telephone conversations at all -- or at least they are avoiding certain words. "It's true that we're thinking twice about what we say," says one minister serving in Merkel's government.

Now that the ministries are taking stock, they're discovering just how vulnerable Germany is as a potential target of espionage.

At the Justice Ministry, officials do not believe their building has sufficient safeguards to protect it from surveillance. Justice Minister Heiko Maas recently shared that sentiment with his colleague de Maizière. He has asked the Federal Office for Information Security (BSI), which is overseen by de Maizière's Interior Ministry, to review all his ministry's mobile phones, computers and software. There was even a discussion of conducting spot checks on employees in units with a higher need for security, an idea quickly dropped out of respect for staff and data protection rights. At the Foreign Ministry, notices alert staff that a specialized firm has been contracted to conduct security reviews of the agency's computers at night.

Officials at Ursula von der Leyen's Defense Ministry have also taken steps. The minister herself often uses a cryptophone. Indeed, prior to sensitive calls in Berlin, she sometimes dispatches a military officer to deliver a cryptophone to her conversation partner. The officer places a call to the minister's encrypted mobile before passing the phone off to the person Von der Leyen wants to speak to.

Following revelations earlier this month that there may have been an informant inside her ministry, von der Leyen ordered a thorough security review. All of the Defense Ministry's units were called upon to submit proposals by early this week on ways to improve its ability to protect secrecy.

Some 400 rules are included in the Defense Ministry's internal security regulations, but the reality is that little attention has been paid to them in recent years and a certain amount of sloppiness is part of everyday business. Most of the rules were last updated in 2005, two years prior to the mass spread of smart phones and, later, tablet computers -- all tools that can be used by almost any employee to copy sensitive data in almost unlimited ways. The ministry is now moving to update its rules as quickly as possible.

SPIEGEL has obtained information indicating that, earlier this year, the BSI installed small mobile radio masts in central locations inside the Berlin parliament and inside ministries. The mobile phones of people making calls nearby log into the mini-masts that have been specially prepared by the BSI and not masts that may be located on the roof of the US Embassy at the Brandenburg Gate or possibly the nearby British or Russian embassies. At the very least, the measure makes it more difficult to practice surveillance from centrally located embassies.

It remains to be seen if the measures will be sufficient or if they will make even the slightest of impressions on the Americans. Few in the government in Berlin believe they will. It depends on whether the German government can make a truly concerted effort that goes beyond the poorly coordinated measures that have been taken so far.

Targeted Monitoring of Embassies and Consulates

Still, Interior Minister de Maizière has had a comprehensive plan for improving technology and counterintelligence measures for some time now. It includes the targeted monitoring of embassies and consulates that are officially considered friends. The minister still hasn't approved all the proposals given to him by his staff, but he is now expected to give the green light more quickly than previously expected. It would enable the federal government to adopt new regulations and instructions without having to pass any new laws.

The fact that de Maiziére and Chancellor Merkel want to move faster underscores just how deep seated resentment towards the US has become and how low hopes are for reconciliation anytime soon. "As long as these very different assessments remain disparate ... one of course cannot talk about fully trouble-free cooperation," Chancellor Merkel's spokesman, Steffen Seibert, said last week. It would be difficult to make a public statement that was sharper in tone.

On Friday, Chancellor Merkel also suggested she would like to provide German intelligence agencies with additional financing and equipment. She said it is "more likely that new technology" would be provided, especially at the BND.

The responsible committee in the Bundestag has already approved a first tranche of additional funding for the BND, but there is still division over further demands for the service. Among the disputed projects is an early warning system for cyber attacks that will cost around €300 million by the time it is completed in 2020. Additionally, the BND is working on a system that can monitor social networks in real-time. Facebook and its competitors are also increasingly becoming the focus of the Federal Office for the Protection of the Constitution (BfV), the intelligence agency responsible for monitoring extremists.

In its program for "Expanded Internet Technical Assistance," the agency outlines its intent to collect and analyze large quantities of Internet data in the future. Agency head Hans-Georg Maassen has said BfV will require additional staff to make that happen. However, he also warns that negative media stories about the agency in recent years have made it difficult to recruit talent. "Nobody wants to work in an agency with a reputation of being filled with fools," he has said.

Both the BND and the BfV are doing their utmost to capitalize on the spying scandal. Officials at both argue that the German government needs to strengthen its own intelligence services if it is truly seeking greater independence from the United States and Britain. It appears these officials are also finding growing support. Government sources say officials in Berlin are preparing for frosty relations with the Americans that could last for some time.

The foreign minister has no illusions about the situation. "This is about more than just decency," Steinmeier says. "There has to be an understanding between friendly states that they won't spy on each other. If this then happens anyway, there has to be a reaction. We've provided that."

The German government is betting that the US and other Western allies will get the message. Some in the government believe the tough new line has already borne fruit -- at least when it comes to the British in Berlin.

As the German national team celebrated its World Cup victory in front of the Brandenburg Gate on Tuesday afternoon, aerial cameras at times panned to show views of Pariser Platz right behind the stage. On the rear right of the images, a building could be recognized that has been of interest to the Office for the Protection of the Constitution for some time now: the British Embassy.

Until recently, a several-meter high, white cylindrically shaped object that looked like the a New York City water tower could be seen on top of the embassy. It's surface bore a strong resemblance to the golf ball-shaped US listening facilities, so called Radomes, that have the subject of scrutiny in other parts of Germany over the past year as the suspected centers of spying on Germany by the National Security Agency.

The aerial images taken during Tuesday's celebrations showed that the white cylinder has been taken down. It's unlikely it was just for repairs. 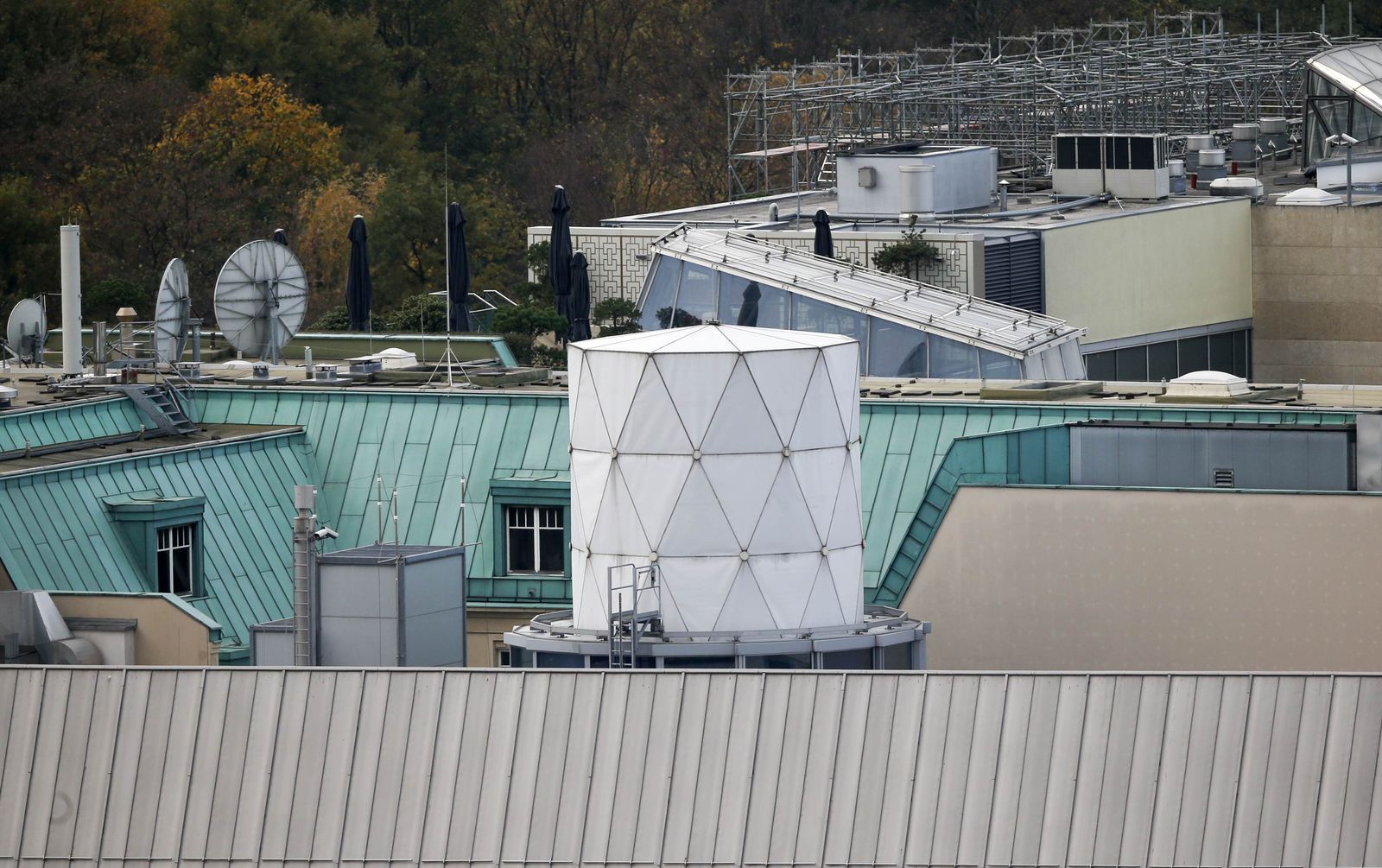 Last year Britain's Independent newspaper exposed that Britain's GCHQ had established a "secret listening post" on top of the British Embassy in Berlin. The cylindric structure has since been removed.