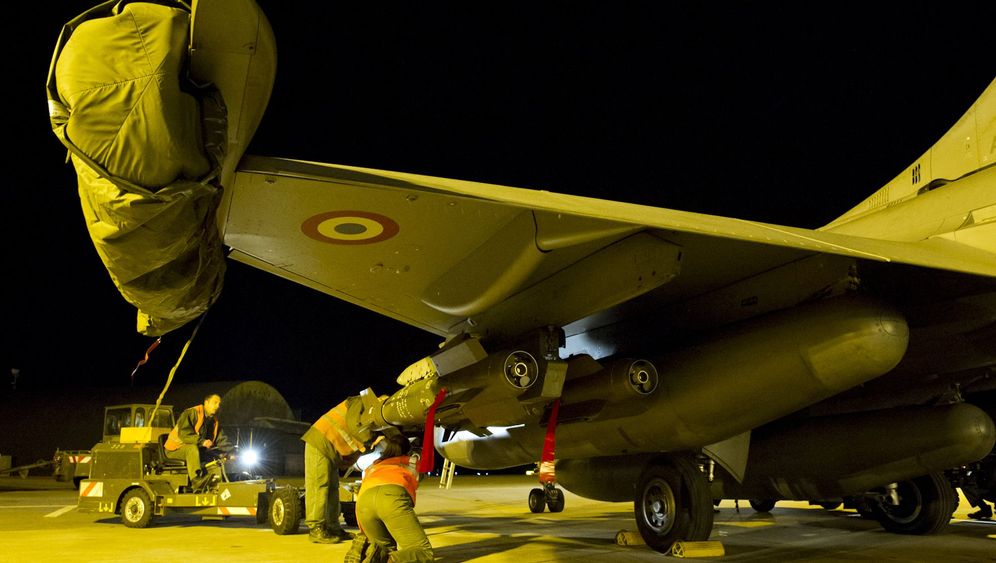 French President François Hollande's rapid decision last week to take an active role in preventing Islamist fighters from pushing into southern Mali caught the international community off guard. Now, however, more and more countries are lining up to support the Paris offensive, which entered its fourth day on Monday.

And Germany, on Monday, unexpectedly became one of them. The government in Berlin has announced that it is prepared to provide cargo planes as well as medical personnel. Andreas Peschke, spokesman for the Foreign Ministry in Berlin, said that Germany did not want to "leave France alone in this difficult hour."

On Sunday, French Foreign Minister Laurent Fabius said that several other allies, including the United States, Britain, Denmark and other countries in Europe, had offered assistance, though none have indicated a willingness to send troops and warplanes. The US has offered communications, transportation and intelligence support. Sources in Copenhagen on Monday told the German news agency DPA that Denmark was considering the provision of active support. Several African countries have pledged to send troops as well.

German Foreign Minister Guido Westerwelle on Sunday once again ruled out the deployment of German troops. "The involvement of a German fighting force is not up for debate," he said. Still, Berlin has voiced support for the French offensive. "France has acted and that was decisive, correct and deserves our support," German Defense Minster Thomas de Maizière said on German radio on Monday.

Germany also remains involved in a European Union effort to develop plans for a military training mission to Mali. On Sunday, Westerwelle said: "The development of plans for an EU training mission for the Malian military will continue. Whether and how Germany will participate will be decided when the plans are complete."

For now, Hollande hasn't just gotten support from abroad either. Despite his vow to scale back France's decades-long support of Francophone Africa, the move to block the Islamist advance has been widely applauded in France.

But the mission, which began last Friday after Islamists began moving south toward the Malian capital of Bamako, is not without its dangers. French forces have spent the last several days pounding Islamist strongholds in northern Mali, including near Gao and Kidal, the epicenter of the rebellion. But the Islamists are well armed, flush with weapons that flooded into the country from Libya and they managed to shoot down a French helicopter early in the offensive, killing the pilot. Currently, some 550 French troops are on the ground in Mali according to news reports.

In addition, the offensive puts the lives of eight French hostages, who are likely being held by their abductors in northern Mali, in danger. Furthermore, a second French commando, wounded in a failed French attempt over the weekend to rescue a Frenchman held hostage in Somalia since 2009, has died according to the Somali rebel group al-Shabaab on Monday. It is believed that the hostage too was killed.

Paris believes that the offensive against Islamists in Mali could put its citizens at even greater risk of attack from Islamist extremists. Indeed, Paris has ordered increased domestic security.

For now, though, Hollande has widespread domestic support and the backing of the international community. German commentators are also largely backing the move on Monday although many seem uncertain what response would be the most appropriate for Berlin.

"A collection of Islamist terror groups have created an international network of wrong in North Africa; they finance themselves through the trade in drugs, weapons and people; they destabilize and they threaten. That has to be stopped. France has now taken the first step."

"But it is not without risk. Mali and the catastrophic failure of the mission to free the hostage in Somalia … show that France is not strong enough militarily. Hollande is dependant on help. First and foremost, a functioning international force made up of African units must be created. But France also needs military assistance from its allies in Europe."

"Germany and its foreign minister have been particularly conspicuous for the inverse relationship between the amount of advice offered and the help actually provided. The German government is hesitating while France is becoming exasperated with Berlin's strategic short-sightedness. Berlin has warned against traveling to the crisis area -- and that's about it."

"Germany is already suffering from the Islamist ring of terror that has encircled North Africa. Refugees are driven north, new drug routes have been created and the Arab revolutions are struggling to define their relationship to extremism. Nobody in Europe can ignore what is happening on the other side of the Mediterranean. ... France has taken the risk and offered help. It cannot be left alone with the problem."

"The biggest challenge now facing France is that of transforming their current unilateral operation into an African mission supported by the international community. Hollande, to be sure, has sought to prepare the French public for a potentially extended mission. ... But the president also knows that his voters are not interested in seeing the former colonial power become involved in a complicated conflict in the deserts of Africa."

"Hollande's expectations will thus be directed toward those African nations that belong to the West African economic alliance ECOWAS and toward his European Union allies. ... In the medium term, the effort to help Mali back to its feet will overextend the French military. And nobody has an interest in French failure at the side of a disorganized Malian military. The German government shares the goal of not allowing Mali to fall into the hands of Islamist terrorist groups. Paris would certainly have nothing against a concrete sign of support as the 50th anniversary of the German-French Élysée Treaty approaches this month."

"Where is Europe? The former colonial power France became the first to help Mali in the form of troops and weapons from its base in neighboring Senegal. And it didn't take long before the first successes against the Islamist rebels were reported. But it won't be enough for a resounding success. The 3,000 troops being provided by the West African alliance ECOWAS also won't be enough, and neither will the 250 military trainers the EU hopes to send, according to a plan unveiled in December."

"British Prime Minister David Cameron agreed with French President Hollande over the weekend to send two cargo planes to Mali to help send materiel and troops, though not yet any British soldiers…. Who in Europe is going to join them?"

"In principle, it is difficult to criticize the use of assault helicopters and air attacks against armed Islamists. ... But the problem with the French intervention is that it is a French intervention. And one in the classic, neo-colonial style of dirty African wars: Without involvement of the French parliament, French troops head out from former French colonies in Africa while cabinet ministers in Paris deny it. The operation only becomes official long after it has begun."

"Traditionally, Africa is a policy area where the French government doesn't believe it needs to talk to anybody, even as it often crows for European unity. A left-wing foreign policy in France would involve changing that. Is it too much to expect from Hollande's government that he change his country's approach to Africa? Apparently it is."