The election of Barack Obama as president has much improved Europe's view of America, according to a survey by the Pew Research Center in Washington that questioned 26,000 people in 24 countries between May and June this year. 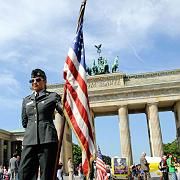 Germany loves Obama, which is leading to a more positive view of America in general.

The changes in opinion in the survey, published on Thursday, are particularly dramatic in Germany where, only six months after Obama took office, 64 percent of those surveyed had a positive impression of the United States. In the previous year, they only numbered 31 percent. In fact, the new numbers are closer to the years before George W. Bush took office.

Almost every German surveyed said they trusted Obama (93 percent). In fact, it seems that only Kenya, the country where his father was born, loves the American president more. On the issue of trust Obama even beats German Chancellor Angela Merkel: Only 75 percent of Germans surveyed found her trustworthy.

Additionally, a majority of Germans (93 percent) think that Obama will do the "right thing" when it comes to foreign policy --almost 80 percent more than in the Bush years.

"His high ratings reflect personal confidence in him, and a sense that he will be much different than Bush -- more multilateral, will seek international approval before using force, ending Guantanamo, getting out of Iraq," said Andrew Kohut, of the Pew Research Center when the survey was presented in Washington.

Other European nations, including France, Great Britain and Spain, have also developed friendlier attitudes toward America. This can be partially attributed to Obama's decision to close the controversial US military prison at Guantanamo Bay and to withdraw American troops from Iraq. In Germany, 84 percent of respondents were pleased about the planned closure of Guantanamo.

However, America's newfound popularity doesn't translate to greater European support for the military mission in Afghanistan, where the US recently stocked up its presence with an additional 22,000 troops. Most Germans (63 percent) still do not approve of the deployment of the Bundeswehr, Germany's armed forces, as part of the ISAF security force in Afghanistan. This could eventually lead to strife in the trans-Atlantic relationship, especially if Washington pushed for more German engagement in Afghanistan -- a request that, at the very latest, is expected to come after German federal elections in September.

Up until now, German soldiers have been stationed in the relatively secure north of Afghanistan and not in the more dangerous south where the chances are greater of getting caught up in combat situations.

An Uphill Battle in the Middle East

But while Europe's ardor for Obama appears fervent, he has actually made little progress in the regions where the US faces its biggest foreign policy problems. In the Muslim world, American popularity has only increased slightly since Obama took office, and that was mostly in Egypt and Indonesia where the President spent some of his childhood. In Turkey or Pakistan, nothing really changed: Under 20 percent of those surveyed had a positive attitude towards the US. Figures were the same before Obama's election.

According to the Pew survey even Obama's much watched address to the Muslim world in Cairo in June didn't really have any lasting, positive affect. Afterwards Palestinian attitudes toward the US rose only a statistically insignificant five percent (from 14 percent to 19). Just as they were before, a broad majority of Palestinians are not convinced that the US president has their best interests at heart. Neither has support among Muslim respondents for suicide bombers and for Osama Bin Laden fallen in any meaningful way.

And just as before Obama's election, the US' economic influence was still being viewed as negative in most of the countries surveyed. There is widespread skepticism as to whether the Obama administration will really work for all sides equally.

Even though the survey suggests that Chancellor Merkel has been somewhat overshadowed by Obama, there is still good news for her here. In the largest European nations -- France, Germany, the UK and Spain -- she is seen as more trustworthy than French president Nicholas Sarkozy. Americans surveyed also viewed her in a positive light. On the other hand, Merkel still doesn't get a lot of trust from the Middle East or Turkey. And almost 10 percent fewer Russians trust her then they did last year.