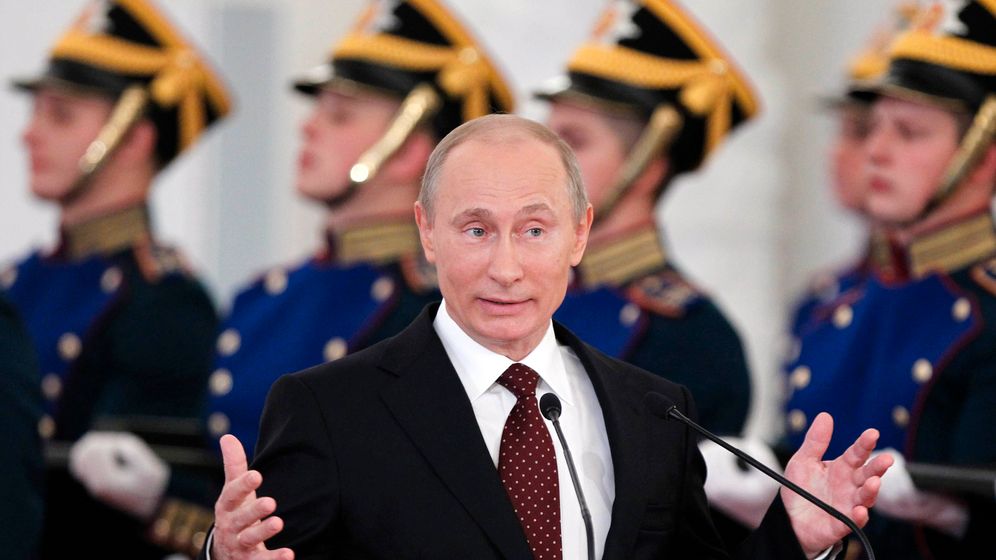 When Russian President Vladimir Putin got out of his black luxury sedan on June 1 outside the Chancellery in Berlin, he didn't have much time for pleasantries. Putin's first trip abroad since his return to the Kremlin in early May seemed a bit like diplomatic speed-dating: In a 24-hour period, he would visit Minsk, Berlin and Paris. And because his goodbyes with Belarusian dictator Alexander Lukashenko had taken so long, German Chancellor Angela Merkel had been kept waiting for an hour.

Outside the Chancellery, Putin hugged Merkel. But, inside, the atmosphere was quite a bit different. Merkel wanted to know what Putin thought about the demonstrations that had taken place in Moscow against his re-election. Putin assured her that it was all part of the past and that it had only involved very small rallies of communists, fascists and sexual deviants. The message was clear: A head of state who defames as perverts those of his countrymen who are unhappy cannot be expected to pursue democratic reforms.

Two beliefs have shaped Berlin's policies toward Moscow since Dec. 31, 1999, the day Boris Yeltsin nominated Vladimir Putin to succeed him as Russia's president. One holds that a Russia with Putin in charge is better than a Russia without him. The other posits that Putin is guiding his massive country slowly -- but steadily -- in the right direction. "Change through rapprochement," has been the German political motto since the late 1960s, when Chancellor Willy Brandt launched the country's Ostpolitik policies aimed at normalizing relations and de-escalating Cold War tensions with the communist states of Eastern Europe.

Currently, however, searching for a change for the better in Putin's Russia is an exercise doomed to failure. The head of the Kremlin has signed an NGO law that labels Russian human rights and environmental activists as "foreign agents." Public prosecutors want to throw Alexei Navalny, an anti-corruption blogger and organizer of mass protests, into prison for a decade. And plans call for stripping Gennady Gudkov, a former colonel in the KGB who has become a spokesman for Putin opponents, of the immunity he enjoys as a member of the Duma, the lower house of Russian parliament.

And then last week, photos from Moscow's Khamovniki District Court made their way around the world. Every morning, bailiffs herded three young women into a glass holding cage as if they were dangerous criminals. The three could face up to seven years in prison just for singing a defamatory song about Putin in a church.

The trial against the feminist rockers from the punk band Pussy Riot could hardly be more absurd. State prosecutors are basing their case on an expert opinion which holds that the women violated a resolution made during a synod of the Eastern Catholic Churches in A.D. 691 that forbids "unnatural screaming" in a church.

Artists and politicians across Europe have professed their solidarity with Pussy Riot. On Tuesday, 121 German parliamentarians from all Bundestag parties issued a statement calling for clemency for the band members. "We consider the months of pre-trial custody and the severity of the penalty they face to be draconian and disproportionate," the statement reads.

Still, the remonstrations have largely served to make the silence of others more notable. Indeed, many have been unable to find their voices since May, when Putin launched his revenge campaign against his critics -- the Russian-German Petersburg Dialogue foremost among them. The dialogue round is an institution that advertises itself as an "open discussion forum" aimed at fostering understanding between the civil societies of Germany and Russia. Yet it is notorious for avoiding sensitive issues, such as human rights.

This annual event was launched 11 years ago by Putin, during his first stint as president, and Chancellor Gerhard Schröder as something "between a state-initiated talk and a high-end buffet," as the left-leaning Berlin daily Die Tageszeitung aptly described it in 2001. Politicians, rather than civil rights activists or intellectuals, do the talking at the event. Of the 24 members on the German steering committee, eight are active or former career politicians, two are representatives of political foundations and three are economic experts with business interests in Russia. The Petersburg Dialogue is co-led by Lothar de Maizière, who, despite being the last head of government of communist East Germany, has limited authority.

Chancellor Angela Merkel has made her displeasure known. She communicates with the forum via Christoph Heusgen, her foreign policy advisor, and last year he indicated to de Maizière that the Chancellery felt there needed to be a shake-up in the forum's leadership. De Maizière did nothing in response.

Heusgen became even clearer in the spring. He said that, if nothing happened, consultations between German and Russian government officials would no longer be held at the same time as the Petersburg Dialogue. Fearing that his forum might lose importance should the threat be carried out, de Maizière gave in. The first to go was Ernst-Jörg von Studnitz, a 75-year-old former ambassador. Studnitz was head of the important civil society working group, but had discredited himself by urging that confrontation be avoided.

Studnitz was replaced by Andreas Schockenhoff, a Merkel confidant and deputy floor leader of her conservatives in German parliament. Ulrich Wilhelm, Merkel's former government spokesman, is slotted to join the media working group.

It is doubtful, however, whether the shake-up will be enough to rehabilitate the forum. "In its current form, the Petersburg Dialogue is not adequate for reacting to the systematic destruction of freedoms under Putin," says Marieluise Beck, an expert on Russian and Eastern European affairs for the Green Party's parliamentary group. One reason for this, she continues, is that Moscow only sends Kremlin loyalists to sit on the panels of the "discussion forum."

Schockenhoff, the Merkel confidant, is also skeptical that Russia's domestic situation can improve. "It will be very difficult to reach any agreements given who's in the Petersburg Dialogue," he says. "The danger is that it will be blocked by the Russian side."

"Rapprochement through closer ties" was the slogan Frank-Walter Steinmeier, Germany's foreign minister at the time, used to describe German-Russian relations in 2006. But, with the Petersburg Dialogue, one gets the feeling that these closer ties also include a heavy dose back-scratching.

To a certain extent, this can be attributed to men like Hermann Parzinger, president of the Prussian Cultural Heritage Foundation and head of the Petersburg Dialogue's culture working group. In a ceremony held in the Kremlin in 2009, Medvedev awarded Parzinger the Order of Friendship, an honor recognizing foreigners who contribute to improving relations with Russia. Parzinger, an archaeologist, made a name for himself with excavations in southern Siberia. There, he found an almost intact grave of Scythians, a tribe of warring horsemen from antiquity.

Given such ties with Russia, Parzinger is reluctant to join attacks on the Kremlin. His position as head of culture means it should have been up to him to sound the alarm when it comes to the case against Pussy Riot. After all, Germany has publicly committed itself to fostering civil society in Russia, and Pussy Riot is part of it. In response to questions about his stance, Parzinger would only allow that he is "concerned." At the same time, he notes that artistic freedom is "not unlimited" in Germany, either.

Things are the same in the West, if not worse: It is the kind of argument that could have come from Putin himself. And Parzinger isn't the only one to have adopted the Kremlin line. Eckhard Cordes, chairman of Germany's Committee on Eastern European Economic Relations, likes to lecture domestic media organizations on their insufficient knowledge of Russia. Cordes also welcomed Putin's decision to pursue a third term as Russia's president. At a meeting at the time, Cordes wished Putin "success in the upcoming elections."

"There has to be an end to this cuddliness," says Beck, the Green Party parliamentarian. "It must be possible to have clashes in the Petersburg Dialogue."

But those in de Maizière's camp are struggling to keep just that from happening. They believe that Germany should not become too overbearing. De Maizière says that views on Russia in Germany are "often one-sided." He points to the criticism of Russia's recent NGO law, noting that even NGOs in the United States are obliged to disclose foreign sources of financing. He also adds that he won't make any final judgment of the law until "I have a text of the law in German in front of me."

He and his colleagues are worried, afraid of jeopardizing their good relations with the Kremlin. They don't want to provoke Putin. And they believe that they can wait until the Pussy Riot affair blows over. They might have even felt somewhat vindicated last Thursday. While visiting the Olympic Games in London, Putin surprised many by saying that he didn't "think that a verdict should be very severe" and that he hoped that "the court will make a fair, well-founded ruling." More likely, however, is that Putin's change of heart was prompted in part by the vocal international protest against the farcical proceedings.

Putin's wink was immediately understood in Moscow. On the very next day, judges suddenly granted the three defendants breaks during the trial, cameras were allowed back into the courtroom and the guards' aggressive German shepherd was replaced by a peaceful Rottweiler.

Putin's influence on the judiciary, however, is a scandal in its own right -- one which the Germans on the Petersburg Dialogue cannot remain silent about.