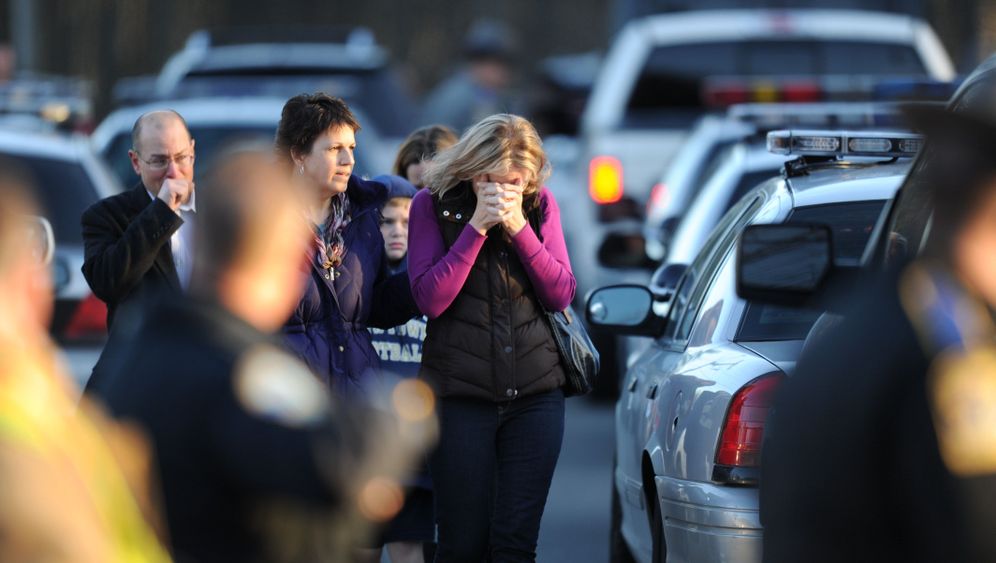 Photo Gallery: A Nation in Shock

Friday's massacre in Newtown, Connecticut, the second-deadliest shooting event in United States history, has sent shock waves well beyond the country's borders. During his shooting spree, 20-year-old Adam Lanza killed 27 people at Sandy Hook Elementary School before turning the gun on himself. Most of the victims of the mass shooting, including 20 children, mostly kindergartners, and six school employees, were found in two classrooms. The shooter also killed his mother.

In Germany, Chancellor Angela Merkel responded to the slayings by saying, "The news from Newtown deeply saddens me. Once again we stand aghast at a deed that cannot be comprehended. The thought of the murdered pupils and teachers makes my heart grow heavy. My deepest sympathy goes out to the relatives. I wish them strength and consolation and hope that they will not be alone in their pain."

At the Vatican, Pope Benedict XVI conveyed "his heartfelt grief and assurance of his closeness in prayer to the victims and their families, and to all those affected by the shocking event."

Meanwhile, in Britain, Prime Minister David Cameron said in a statement: "I was shocked and deeply saddened to hear about today's horrific shooting. My thoughts are with the injured and those who have lost loved ones. It is heartbreaking to think of those who have had their children robbed from them at such a young age, when they had so much life ahead of them."

In a message sent to US President Barack Obama, Queen Elizabeth II said she was "deeply shocked and saddened" to hear of the shootings. "The thoughts and prayers of everyone in the United Kingdom and throughout the Commonwealth are with the families and friends of those killed and with all those who have been affected by today's events."

In France, President Francois Hollande sent a message to Obama stating, "This news … horrified me and I wish to express my deep shock and consternation." France also offered its "full support to the American people and authorities."

Speaking on behalf of the European Union, European Commission Prsident Jose Manuel Barroso expressed his "deep shock and horror" over what he called a "terrible tragedy" at Sandy Hook Elementary School. "Young lives full of hope have been destroyed," he said in a statement. "On behalf of the European Commission and on my own behalf, I want to express my sincere condolences to the families of the victims of this terrible tragedy."

In Moscow, Russian President Vladimir Putin called the events "particularly tragic" because most of those killed were children. "Vladimir Putin asked Barack Obama to convey words of support and sympathy to the families and friends of the victims and expressed his empathy with the American people," the Kremlin said in a statement.