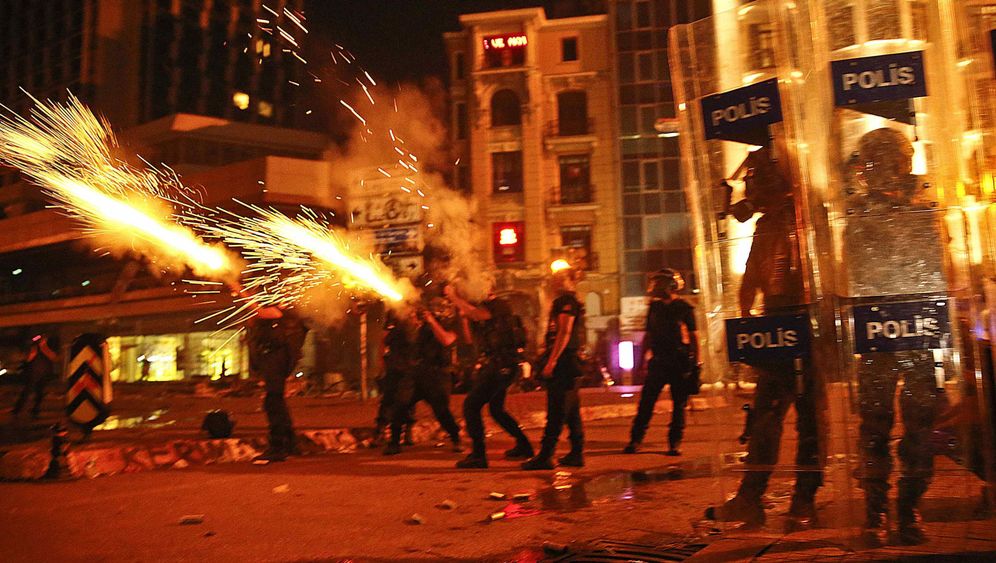 Less than 24 hours after the first assault, Gezi Park and entire streets resemble a battlefield. Tear gas canisters and burned-out cars lie everywhere. Paint bombs have dyed the demonstrators' clothes yellow. Their night of combat is now over.

It is early Wednesday morning in Gezi Park, located in the heart of Istanbul. On Tuesday, with absolutely no warning, police charged into Taksim Square on foot and in water-cannon vehicles. Some reports indicate they also fired rubber bullets. Demonstrators had been occupying the square for 14 days -- and the police were determined to change that.

In a speech delivered on Tuesday, Prime Minister Recep Tayyip Erdogan said that the crackdown was merely aimed at freeing the Atatürk Cultural Center and a memorial to the founder of modern Turkey in the heart of the square from the "pieces of rags," referring to the banners and flags placed there by protesters.

Just prior to the offensive, police announced by megaphone that they were only targeting anti-government demonstrators in the square rather than protesters in Gezi Park next door. Those occupying the park, they said, were safe.

That, though, turned out not to be the case. Throughout the day, police fired tear gas canisters at the demonstrators and chased them down with water cannon. The situation escalated in the evening. Protesters took to a platform erected in Taksim Square and called on Istanbul residents to join them. An estimated 30,000 people streamed into the park and the square, where activists set cars and discarded building materials on fire. Clouds of black smoke and tear gas wafted over the square.

Gezi Park quickly became a retreat from the battle raging on Taksim Square. Under the constantly repeated pretext of aiming to drive supposedly radical fringe groups from the square, the police fired tear gas canisters straight into the crowds from close range. Dozens of wounded were brought into the park, which opens up onto the northeast corner of the square, for treatment at a makeshift aid station.

Huge crowds followed. With each bang, panic broke out along its narrow paths. But the demonstrators still refused to leave and sought to defend themselves. Even though no attacks originated from the camp, police rushed its entrance, only to be blocked there by a human chain of protesters.

The demonstrators refused to give up. Filled with rage, they continued to chant slogans urging the police to "take their helmets off and throw away their truncheons if they dared." "Taksim is everywhere," they shouted. "Resistance is everywhere."

During the night, street battles broke out between police and protesters in the camp. The Turkish media broadcast live images of police battling supposed militants attacking them with petrol bombs and fireworks. Meanwhile, security forces at the back of the park were firing tear gas canisters at the young protesters and their tent encampment in the park.

Instead of forcing their way into the park, a thick cordon of police surrounded it. They even fired tear gas canisters into the makeshift aid stations where the severely wounded were being treated. Their goal was to ratchet up the pressure so high that the demonstrators would abandon the park. But there they remain.

Appearing on a televised news broadcast, Istanbul's governor Huseyin Avni Mutlu, made repeated calls for parents to urge their children to get out of the camp because the "radical marginal groups" were making it too dangerous for them to stay. But those who suffered the brunt of police violence were nothing of the sort. Instead, they were the university students that Erdogan and Mutlu were supposedly trying to protect from the evil provocateurs.

Among the protesters, one could sense rage mixed with doubt. Those caught up in the fighting, including many who had been temporarily blinded by the gas, sought refuge in the lobbies of surrounding hotels. Others sat dispirited on the grass. But at 5 a.m., they were standing back up, clapping their hands. They wore shorts, flip-flops and gas masks.

Residents of the protest encampment were cleaning up the area and making themselves tea. Those who had stood at the frontlines of the confrontation were sleeping. Others stood watch to warn of any further attacks.

The battle in central Istanbul is not over.