Mahmoud Zahar, 64, is sitting in an armchair in the corner of a huge room on the ground floor of his house in the Tel al-Hawa neighborhood of Gaza City. On the other side of the room stands a massive desk, and beyond that a Toyota off-road vehicle. This space serves Zahar as a reception room, an office and a garage, all rolled into one. Zahar looks like a lonely man.

He feels betrayed by Israel's Prime Minister Benjamin Netanyahu. In the spring of last year, Netanyahu asked Germany's foreign intelligence agency, the Bundesnachrichtendienst (BND), to act as a go-between in the negotiations with the militant Islamist group Hamas over the possible release of the soldier Gilad Shalit, who was abducted and taken to the Gaza Strip in 2006. Zahar, who is a senior Hamas leader in the Gaza Strip, became the BND's contact person on the Hamas side. Now he has had enough. "I am not ready to negotiate anymore," Zahar told SPIEGEL.

Zahar had received the German negotiators countless times in the Gaza Strip. In December they agreed on a deal: In exchange for the Israeli soldier, 1,000 Palestinians were to be released from Israeli prisons. Netanyahu's negotiator, Hagai Hadas, also indicated his agreement. "Everything was ready to sign," says Zahar. He says he traveled to Damascus to convince Khaled Mashaal, the exiled political leader of Hamas, to approve the deal. That was no easy task, Zahar says. He argued in favor of a compromise because the German mediator sent signals that Israel would agree to the deal. "I invested so much time, I once even sacrificed the Friday prayer because I was busy working for a compromise," he recalls.

But then Netanyahu and his security cabinet rejected the proposal. The prime minister had a falling out with his negotiator, according to insiders. It wouldn't be the first time that Netanyahu has caved in to public opinion and objections from his right-wing nationalist coalition. After Christmas, the Israeli prime minister put forward a watered-down proposal. He called it his "final offer."

A Split within Hamas

The Israeli change of heart caused enormous frustration, and not just within the BND. It has also damaged Zahar's position within Hamas. "I have suffered a lot internally," says Zahar. His comment indirectly confirms the belief that Hamas is divided into two camps: Hamas representatives in the Gaza Strip tend to take a more pragmatic approach because they deal with the problems of the Palestinians on a daily basis, while the politburo in Damascus can afford to take a more radical position. Netanyahu's rejection has strengthened Mashaal's position as a hardliner. And the head of the military arm of Hamas, Ahmed Jabari, who according to the BND started out on Zahar's side, has now switched to Mashaal's camp.

The Israeli daily Haaretz has reported that Mashaal and Jabari excluded Zahar from the negotiations two weeks ago. Zahar, however, says that he reached the decision himself. He says he has had enough of the Israelis' "childish games." It's impossible anyway to enter into a contract with the "infidels," he rants, and cites a line from the second sura of the Koran: "Is it not so that every time they made a promise, some of them cast it aside?"

The negotiations have probably failed, assuming Netanyahu doesn't change his position again. Officially, Hamas still hasn't responded to Netanyahu's "final offer." But the German intermediary will receive no response. "The Israeli offer is totally unacceptable," says Zahar. "We won't respond to it."

Zahar praises the German mediator for his professionalism and says he is ready to meet him again. "But only in private," he says. 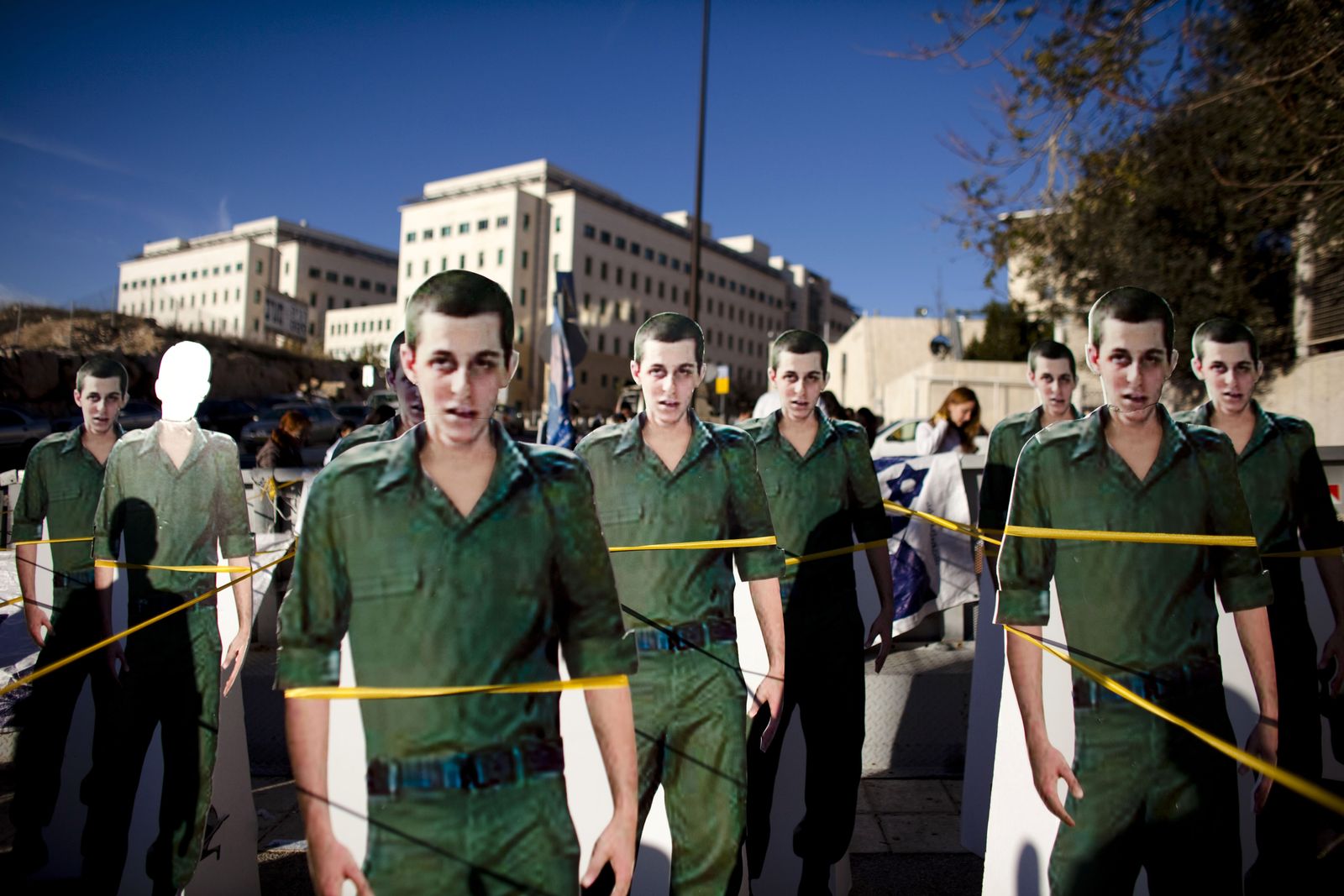 Cardboard cut-outs of abducted Israeli soldier Gilad Shalit are seen during a protest calling for Shalit's release outside Benjamin Netanyahu's office in Jerusalem: Negotiations between Hamas and Israel over a possible prisoner swap have now broken down.