The stock markets are harbingers of economic hardship. Each stagnation, downturn and recession goes hand-in-hand with falling stock prices, often even a market crash. The biggest crashes have names: Black Friday in 1929, or Black Monday in 1987.

But sometimes a spike in prices signals that the worst is yet to come. Axel Weber -- president of Germany's central bank, the Bundesbank, and a member of the European Central Bank (ECB) governing council -- is well aware of that possibility. For some months now, he has been watching the steep gains in international securities indices, especially on the commodity futures exchanges, with growing concern.

For instance, the price of spring wheat, which is traded on the Minneapolis Grain Exchange, has jumped from $5.50 a bushel (about 35 liters) in May to $9 today. A year ago spring wheat was selling for only $4.60 a bushel, a little more than half the current price.

Within the last year, the prices of corn and soybeans have increased by up to 70 percent in key trading markets. The prices of many metals, lumber, rubber, wool and other raw materials used in the manufacture of consumer goods have also been rising steadily for months. Other data and price developments also suggest that hard times may be ahead. Besides, the price of oil keeps hitting new record levels.

Weber finally sounded the alarm last Sunday. "As a central bank, we are certainly worried," he said. "What concerns us is the rise in prices across the board, that is, not just in the energy and food sectors. Inflation could increase to 3 percent by the end of the year." That would be the biggest price jump in 14 years.

Jürgen Stark, the chief economist for the ECB, was also full of grim warnings that the risk of inflation in the euro zone has grown in recent weeks -- despite the international financial crisis and an economy curbed by the strong euro. These were unusually clear statements for central bankers, who normally choose their words with great caution.

The mixture of rising prices and a weakening economy is a nightmare for every central banker and economic politician. It inevitably brings higher unemployment, a decline in government revenues and growing poverty.

What Weber and Stark prefer not to mention is that the fault for this calamity lies with them and their counterparts from the world's leading central banks. For years, they flooded the world with more money than ever before in history. Their chief aim was to jumpstart their respective economies and keep them humming.

At first, all this cheap money had its inevitable and intended effect, acting as a lubricant for economies around the globe and, apparently, as a blessing for the world.

The Curse of Cheap Money

But now this low-interest rate policy is becoming a curse. In recent years, it has already contributed significantly to growing income disparity. The rich got richer, both in Germany and, to an even greater extent, in the United States. But now the flood of liquidity let loose by central bankers has become almost uncontrollable. Like sorcerers' apprentices, the central bankers made mistakes when determining the dose of the magic bullet and, in doing so, have maneuvered themselves into an almost hopeless position.

If they raise interest rates to curb or at least reduce rising inflation, the financial crisis could lead to a massive economic slump. But if they keep rates at the current, relatively low level, prices will continue to rise, inevitably making the poor even poorer.

It was a Wednesday when things began to go haywire in the world. But at the time no one had any idea that this was in fact happening. On January 3, 2001, Alan Greenspan, then head of the powerful US Federal Reserve Bank, lowered the US prime rate from 6.5 to 6 percent. The event in itself was relatively insignificant, but it marked the first of a total of 13 steps in which the monetary watchdogs reduced key interest rates to a pitiful 1 percent.

From the Fed's perspective, this makes complete sense. Unlike the ECB, whose only goal is monetary stability, part of the Fed's job is to stimulate the economy, and there is no better way to achieve that than with low interest rates. Saving money becomes increasingly unattractive as interest rates fall. Instead, it makes more sense to spend money, or even to borrow money and use it to invest in companies. In this situation, the economy can go nowhere but up.

The world's two other important central banks, the ECB and the Bank of Japan, also lowered their key interest rates, to 2 percent and 0.1 percent, respectively.

But cheap money has a price. It's called inflation.

The more money there is in circulation, the faster prices rise, at least in theory.

Indeed, what happened initially was what was supposed to happen: The volume of money grew substantially worldwide. This alone is a reliable indication of rising inflation. Nevertheless, consumer prices remained surprisingly stable. 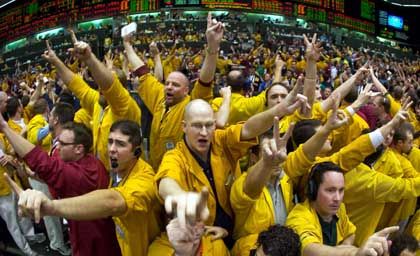 Traders at the Chicago Mercantile Exchange. Financial and commodities markets have been surging, but the party may be over soon.

The reason was an increasingly interconnected world in which competition is constantly growing and barriers to trade are being eliminated. Companies in the major industrialized nations lacked the power to achieve higher prices, because competing products, especially from the emerging economies, were improving in quality and cheaper to boot. This also began to apply to capital goods -- machinery and equipment -- with which businesses in the industrialized nations could boost their own production.

The excess dollars, euro and yen that were not being spent on capital goods went into more lucrative investments. Stock markets in China and India and in other rising Asian economies, as well as in Turkey and South America, were booming. Real estate prices also began to rise in the United States, Great Britain and Spain.

Those who invested their money in these markets could make quick and substantial profits, and those with decent credit ratings could also borrow money at historically low rates and pump it into lucrative investments. In the end, say financial experts, this low interest rate policy even helped a relatively new sector of the financial industry establish itself. The business of investment funds, also known as private equity, would have remained relatively insignificant without the enormous flood of cheap money.

Beginning in 2003, the giant speculation party became downright euphoric. Markets around the globe became overheated. In Germany, the DAX has gained more than 200 percent between the spring of 2003 and today, while the Tec-DAX, an index of high-tech companies, has also tripled in value.

There have been minor corrections, but nothing approaching a general crash. There was simply too much money in circulation worldwide for that to happen. Those who were invited to the party could practically do nothing wrong.

And those were the rich of this world, the people who had enough surplus income to invest it profitably. The gap between rich and poor only became wider.

The share of profits and yields on assets as a percentage of overall budget income increased by 10 percent in the past seven years, but this growth is not evenly distributed. Low-income earners rarely own stocks, bonds or apartment buildings. Their net income has declined by 5 percent in recent years, while the richest 10 percent of the population have in fact added 10 percent to their incomes.

The US real estate bubble had hardly begun sending shock waves around the globe this summer when the Fed took a step backward and hectically lowered the prime rate by half a percentage point.

But this places the ECB in a predicament. It has a choice to make, but only between two evils.

If it raises rates, the euro will become even stronger, making European products more expensive outside the European Union. This would be more than awkward for Germany, one of the world's biggest exporters. But if the ECB keeps interest rates at the same level or even follows the Fed's example and lowers rates, we could face a "prolonged phase of inflation," says Thorsten Polleit, chief economist at Barclays Capital Deutschland, "and probably at a rate significantly higher than 3 percent."

Prices Rising All Over the World

There are many indications that Polleit is right. Prices are rising sharply, both in Germany and other countries. In a globalized world, rising prices are no longer such a purely national phenomenon as they were only 10 years ago. The emerging markets, in particular, are now demanding payback for the many years they have spent producing and exporting textiles, toys, refrigerators and many other goods for low wages. These countries are now seeing both income growth and higher prices.

In China, for example, the more than 15 percent rise in food prices is almost entirely responsible for overall inflation, International Monetary Fund (IMF) experts concluded at their fall conference in Washington. China's inflation rate is approaching 7 percent. Inflation has already reached 17 to 25 percent in Argentina, despite the fact that the government has manipulated the figures downward to less than half these levels. Inflation is also sharply on the rise in South Africa, Russia and India.

If goods and services become consistently more expensive in Germany, this will only widen the gap between rich and poor. Inflation always has the most drastic impact on people with lower incomes, who spend a larger percentage of their disposable income on ordinary consumer goods than high earners.

Although higher prices also mean higher wages and salaries, the tax authorities are the first to benefit from the incremental earnings -- but not when it comes to high earners. Not much changes for those who have already reached the highest tax bracket, while everyone else is affected by what is known as cold progression: the marginal tax rate changes with each additional euro in income, resulting in a more uneven distribution of the tax burden.

Those who have money can also attempt to beat inflation with evasive strategies. Existing loans, such as mortgage loans, become cheaper relative to income. Besides, high earners can shift their assets to inflation-proof investments like gold or other precious metals.

The public continues to welcome low interest rates. Haven't they contributed to the booming economy? And to the stock markets reaching new record highs? And while the financial crisis may be worrisome to anonymous big bank executives in their offices high up in glitzy skyscrapers, it hasn't affected the real economy. Right?

For Polleit, this is an illusion. "The monetary watchdogs run the risk of succumbing to public pressure, thereby losing sight of their real job, which is to keep the value of money stable," he says.