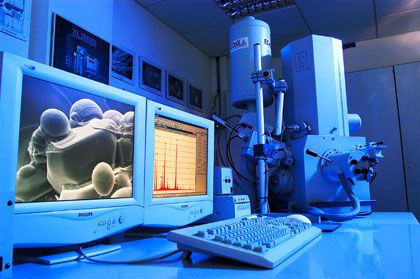 Concrete analysis in a Düsseldorf laboratory: "Lots of things can be tested in an aquarium."

Vinod Khosla has a lot of money, and he wants to put it to good use, which explains his Silicon Valley nickname, "Angel Investor." The 53-year-old Indian has already invested $450 million (€290 million) of his personal fortune in new technologies to save mankind and the planet.

A little more than a year ago, Khosla received an e-mail. What it contained, in its 12 lines of text, was exactly the sort of thing this immensely wealthy philanthropist likes to read.

"I have an idea for a sustainable cement," Brent Constantz, a chemistry professor, wrote. His idea was to convert the carbon dioxide emissions from a power plant into cement, thereby rendering the gas harmless.

It seemed like a bold idea, which was precisely why it caught Khosla's attention. Although he was vacationing at the time, he promptly called the inventor and told him: "Hire five people and build a laboratory!" Constantz replied that his plan was not something for the faint of heart. In response, Khosla barked: "I've given you the money. So get going already!"

Meanwhile, the new company, which is called Calera, has built a prototype plant on a site next to a gas-fired power plant in Moss Landing, California. In his new laboratory, chemist Constantz is studying ways to siphon off a portion of the carbon dioxide released by the plant and conduct it through sea water from the nearby Pacific Ocean.

Constantz theorizes that when the carbon dioxide is combined with the magnesium and calcium dissolved in the water, the resulting substance will be something mankind uses in vast quantities: cement. "Chemically speaking, the same thing happens in coral when it grows," says Constantz, who originally developed a type of cement used to repair bone fractures and in dental applications. This reaction with seawater would benefit the climate, because the carbon dioxide from emissions would be incorporated into the carbonate. Then heat from the power plant would be used to dry the mud-like material. "We get the smallest bricks that can be used to make cement," says Constantz.

In this way, power plants, which normally eject carbon dioxide into the atmosphere, could be turned into carbon sinks. On the one hand, the CO2 they produce would be rendered harmless. On the other hand, they would eliminate the energy-intensive production of brick in the cement industry. "One ton of my cement removes half a ton of CO2 from the environment," claims Constantz, who is also a visiting professor at Stanford University.

Cement as a Greenhouse Gas Culprit

The concrete industry produces more than two billion tons of cement worldwide each year. In doing so, it releases 5 percent of the carbon dioxide emitted worldwide, making it the third-largest single producer of the greenhouse gas. The industry's large carbon footprint is a result of energy-intensive production processes, which include temperatures of 1450 degrees Celsius (2642 degrees Fahrenheit) to bake the raw materials and the use of electric motors to pulverize the resulting cement bricks. 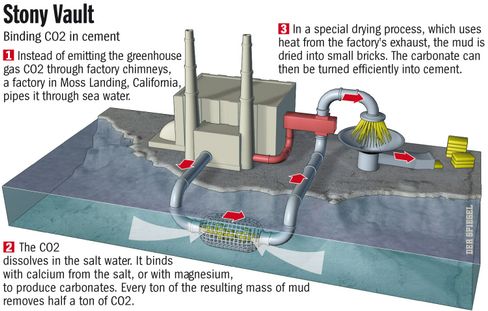 Just like coral: How to make cement from factory exhaust.

"Because of this process, it is difficult for us to significantly lower carbon dioxide emissions," explains Martin Schneider, director of the Research Institute of the Cement Industry in Düsseldorf. The most promising method is to do away with the bricks altogether, says Schneider. This is achieved partly through the use of granulated cinder, a byproduct of the steel industry. But steel mills are already sending their entire annual production volume of seven million tons to cement plants today. "I don't see any way of increasing that number," says Schneider.

For this reason, the method Constantz has devised for turning CO2 into cement is especially appealing to Schneider. The California inventor promises to be able to produce precisely the alternative material that the cement industry needs so desperately.

Constantz expects to have five prototype plants up and running by next year, and the first commercial model by 2010.

This is music to the ears of his financial backer, Khosla. But cement expert Schneider cautions against too much economic optimism. The process may work on a small scale, according to Schneider, but transferring to a large-scale production environment is a different story altogether, and Calera has yet to prove that this is possible. "Lots of things can be tested in an aquarium," says Schneider.

Other ideas designed to eliminate greenhouse gases also have yet to pass the practical test. Many engineers, physicists and chemists around the world are currently developing ways to sequester carbon dioxide. Research institutes in the United States, in particular -- a country where the belief in technical feasibility is especially pronounced -- are constantly coming up with new proposals.

Planktos, based in California, has come up with the idea of using giant tankers to add iron dust to the world's oceans, restoring the behavior of wind-borne dust (which diminishes with global warming) and stimulating algae growth. The CO2 captured in the algae would sink into the depths when the plants die. A large-scale test near the Galapagos Islands failed recently, due to insufficient funding.

Ning Zeng, an American atmospheric researcher at the University of Maryland, has proposed submerging tree trunks deep into the oceans -- and, along with them, the CO2 captured in the wood fiber. According to Zeng's calculations, such a program could provide employment for one million forestry workers.

Many of his colleagues criticize Zeng's proposal. In fact, it does seem more sensible not to chase the greenhouse gas when it is already wafting through the earth's atmosphere. It would be easier to collect CO2 before it is emitted through chimneys or exhaust pipes, and then store it underground, in a process called sequestration.

Norwegian national Olav Kårstad, a reserved engineer with the StatoilHydro Group, devised this process. He applied it for the first time at the Sleipner North Sea gas-drilling platform, where carbon dioxide is pumped into the well, driving out valuable natural gas at the same time. Since then, many research groups, including Germany's Federal Institute for Geosciences and Natural Resources, have been looking for suitable and safe storage sites. Scientists are also studying the possibility of pumping carbon dioxide into coal seams. This would lead to the release of methane, which could be captured and used as a fuel.

Even if safe final storage succeeds, all of these methods have an economic drawback. Carbon dioxide from power plants would have to be captured and sequestered in highly compressed form. However, this costs energy. A coal power plant, for instance, would lose about 10 percent of its efficiency.

Nevertheless, fervent climate researchers like Hans Joachim Schellnhuber, an advisor to German Chancellor Angela Merkel, are also open to bold proposals. "We are in a desperate situation," says Schellnhuber, "which is why we should also pursue unconventional ideas."