Fort Dimanche, a former prison in the hills above the Haitian capital Port-au-Prince, is a hell on earth. In the past, it was home to the torture chambers of former dictator "Baby Doc" Duvalier's death squads, the Tontons Macoutes. Today thousands of impoverished Haitians live in the prison's grounds, digging through piles of garbage for food. But even dogs find little to eat there.

On the roof of the former prison, enterprising women prepare something that looks like biscuits and is even called by that name. The key ingredient, yellow clay, is trucked in from the nearby mountains. The clay is combined with salt and vegetable fat to make dough, which is then dried in the sun.

For many Haitians, the mud biscuits are their only food. They taste of fat, suck the moisture out of the mouth and leave behind an aftertaste of dirt. They often cause diarrhea, but they help to numb the pangs of hunger. "I'm hoping one day I'll have enough food to eat, so I can stop eating these," Marie Noël, who survives with her seven children on the dirt cakes, told the Associated Press.

The clay to make 100 of the biscuits costs $5 (€3.15) and has risen by $1.50 (€0.95), or about 40 percent, within one year. The same is true of staple foods. Nevertheless, the same amount of money buys more of the mud cakes than bread or corn tortillas. A daily bowl of rice is almost unaffordable.

The shortages triggered revolts in Haiti last week. A crowd of hungry citizens marched through Port-au-Prince, throwing stones and bottles and chanting, "We are hungry!" in front of the presidential palace. Tires were burned, and people died. It was yet another of the rebellions that are beginning to occur with increasing frequency worldwide, but which are still only a harbinger of what is yet to come.

Food is become increasingly scarce and expensive, and it is already unaffordable for many people. The world's 200 wealthiest people have as much money as about 40 percent of the global population, and yet 850 million people have to go to bed hungry every night. This calamity is "one of the worst violations of human dignity," says former UN Secretary-General Kofi Annan. 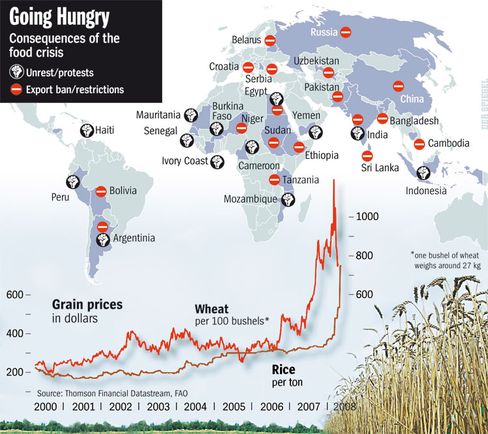 Should we be surprised that despair often turns into violence? The food crisis afflicts the world's poor -- in Africa, South Asia and the Middle East -- like a biblical plague. Prices for staples like rice, corn and wheat, which were relatively stable for years, have skyrocketed by over 180 percent in the last three years. A bottleneck is developing whose consequences are potentially more severe than the global crisis in the financial markets. With nothing left to lose, people on the brink of starvation are more likely to react with boundless fury.

The World Bank and the International Monetary Fund (IMF) addressed this global crisis at a joint meeting last weekend. World Bank President Robert Zoellick warned that exploding food prices threaten to cause instability in at least 33 countries, including regional powers like Egypt, Indonesia and Pakistan, where the army has had to be brought in to protect flour transports. The crisis is helping radical Islamic movements gain strength in North Africa. There has been unrest in recent weeks in Mauritania, Mozambique, Senegal, the Ivory Coast and Cameroon, where the violence has already claimed about 100 lives.

There are several reasons for the food crisis:

What we are beginning to face is not just an acute bottleneck, but a worldwide, fundamental food crisis. It affects most of all the poor, who spend a disproportionately large share of their income on food and water. The crisis is so dire that it is obliterating any progress made in recent years in fighting disease and starvation.

With too many people and not enough agricultural land, a struggle for the distribution of the best farmland is taking shape that could turn into a new North-South conflict. "These days you hear a lot about the world financial crisis," wrote US economist Paul Krugman recently in his regular column in the New York Times. "But theres another world crisis under way -- and its hurting a lot more people."

Mexicans were the first to take to the streets, when they protested against higher prices for cornmeal, the basic ingredient in tortillas. Mexico can only cover a portion of its demand with domestic production. It imports the rest, mainly from the United States. Meanwhile, more and more farmers in the US are selling their corn to biofuel producers, who pay a higher price for the grain.

To avert further protests, Mexican President Felipe Calderón decided to increase government subsidies for corn, which were already high to begin with. But only countries that are relatively strong financially can afford this. In other countries, like Haiti, Bolivia, Algeria and Yemen, the lower classes have been hard hit by food-price inflation.

'People Are Dying Before Our Eyes'

In the Middle Eastern country of Yemen, people get by on an average of €1.18 ($1.86) per day. The government faces the challenges of a wave of refugees from Somalia, tribal warfare in the north and the constant threat of terrorism. Since February, wheat prices in Yemen have doubled and the price of rice and cooking oil has increased by a fifth. And since the end of March, people have died in Yemen in unrest over bread prices.

Within the last quarter, food prices have increased by 145 percent in Lebanon and 20 percent in Syria. "Even parsley, for which we paid almost nothing in the past, has suddenly tripled in price," complains one resident of the Syrian capital Damascus.

Iraq and Sudan, once the "bread baskets" of the Arab world, are nowadays dependent on the World Food Programme. More than a million people in Iraq and 2 million in Sudan's Darfur region require food aid. Life in Darfur, Sudan's western province, has always been difficult. The Sahara has shifted southward in the last four decades, while rainfall has declined dramatically. Yields of sorghum, the area's most important grain crop, have dropped by two-thirds.

The civil war in Sudan has made more than 2 million people in refugee camps completely dependent on food aid. Fields in the region have not been farmed for years. "People are dying before our eyes, while the world looks on," says Johan van der Kamp of the German aid organization Deutsche Welthungerhilfe.

Developing countries faced a similar challenge more than a generation ago, which led to the advent of the so-called Green Revolution. Through the use of fertilizer, pesticides and hybrid seed, farmers in developing countries were able to boost their harvests considerably. Some now believe that it is time to launch a second green revolution. The heads of research at agricultural conglomerates are convinced that genetic engineering could be the answer to the world's food problems. But the question is: how long would it take?

Food shortages have even become an important issue in affluent areas, like Dubai, where supermarkets have pledged not to raise the prices of 20 staple foods for at least one year. The goal, clearly, is to prevent dissatisfaction within the city's legions of Indian and Pakistani construction workers. Without them, the enormous hotels, museums and artificial islands with which Dubai is making such a stir in the world would not exist. Foreign workers are paid their meager wages in the local currency, the dirham, which is tied to the falling dollar.

The beneficiaries of globalization on the Gulf can ill afford food riots in the shadow of their skyscrapers and shopping malls. "The consequences of discontent, anger in the Middle East can be more geo-political than they may be elsewhere," Robin Lodge of the United Nations World Food Programme recently told the news agency Reuters. Nowhere is this truer than in Egypt.

Saad Ibrahim owns a small snack shop in Cairo in a neighborhood behind the Al-Azhar Mosque. He sells dishes like noodles and chickpeas in tomato sauce, and his shop is in a good location. Nevertheless, most of the faithful now walk quickly past his shop after Friday prayers. "I have fewer customers every day," says Ibrahim.

Last fall a ton of noodles cost about 1,500 Egyptian pounds, or a little more than €175 ($276). Since then, prices have tripled. Ibrahim blames the government for the price hike. "As an agricultural country," he says, "we could grow everything ourselves, instead of importing it for a lot of money."

Thirty-two million of Egypt's population of 80 million get by on €1 ($1.58) a day, and 16 million on even less. The price of cooking oil alone has risen by 40 percent within the last year. Inflation jumped to above 12 percent in February, and the higher cost of wheat has had an especially adverse impact.

"Aish baladi," a soft, round flatbread, is a mainstay of the Egyptian diet. The state has subsidized it for decades, which has helped to preserve calm. But for how much longer can this system function? The lines are getting longer in front of bakeries that sell the subsidized bread, as more and more Egyptians depend on government aid. Riots in recent weeks claimed at least 11 lives after corrupt bakers sold inexpensive, subsidized flour at high prices on the black market, triggering an angry response from the public.

Meanwhile, the government has slated $2.5 billion (€1.58 billion) of its new budget for bread subsidies. But providing cheap bread comes with its own bizarre consequences. Some farmers are already feeding bread to their livestock because of the exorbitant cost of animal feed.

Raising cattle is a profitable business because rising incomes in some developing countries mean that more and more consumers can afford to eat meat. The new middle class in Delhi and Beijing is no longer satisfied with traditional diets high in foods like rice and lentils. But it takes seven kilograms of feed and vast quantities of water to produce just one kilogram of beef, which only drives up prices.

In Jordan, which has a modern system of agriculture, the cost of staple foods has increased by 60 percent within a year. "I can hardly sell my vegetables anymore," says Hussein Bureidi, a vendor who operates a stand near the Grand Mosque in the Jordanian capital Amman. "How can this go on?" King Abdullah fears a return of the 1996 food riots, when angry citizens clashed with police in the city of Karak.

In Algeria, the prices of cooking fat, corn oil, sugar and flour have doubled within six months. With the exception of an inadequate, 15-percent increase in salaries for civil servants, the government has done little to fend off what Radio Algiers called an "attack on our standard of living." Until now, oil and gas revenues have not been used to fund additional food subsidies. If this were the case, the government might find itself no longer able to service its foreign debt on time.

But India has the largest number of underfed people, about 220 million. Aptly enough, two international conferences on the food crisis took place in New Delhi last week. Jacques Diouf, the Senegalese head of the UN Food and Agriculture Organization (FAO), blamed the dilemma on rapid growth in demand in both China and India. The crisis, Diouf said, could expand into an unprecedented catastrophe.

China has close to a quarter of the world's population to feed, but only 7 percent of its farmland. A similar situation applies in India. This means that both countries must import food on a large scale, prompting many exporting countries to impose export quotas so that their own citizens are not suddenly forced to go without.

When Haiti's hungry poor went on a rampage last week, the United States closed its embassy there as a precaution. The incidents also alarmed British Prime Gordon Brown, who wrote a letter to his Japanese counterpart, Yasuo Fukuda, the current chairman of the G-8 nations. In the letter, Brown recommended that the international community endeavor to prepare a "fully coordinated response" to rampant hunger.

It would not come a moment too soon.