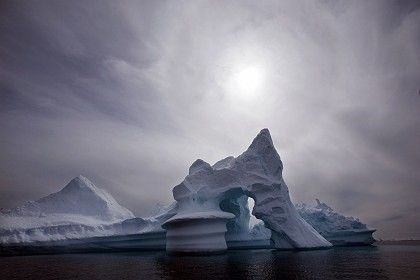 An iceberg melts off Ammassalik Island in eastern Greenland, July 2007.

It was the scientific culmination of a year during which the Intergovernmental Panel on Climate Change (IPCC) has held a steady series of press conferences. The international group of global warming experts presented its 2007 World Climate Report to the world in four stages.

The first three courses were served up in February, March and May: it was heavy fare that caused widespread stomach ache because the reports made absolutely clear how much of a danger climate change poses. Now, in the Spanish city of Valencia, came a fourth course in the form of the Synthesis Report. But anyone who thought the fourth course would round off the opulent menu with gusto was greatly disappointed.

If one reads the 23-page "Summary for Policymakers" line for line, then it is clear that this report is merely summarizing what has already appeared in the first three reports.

Quite a few climate researchers had been hoping that Part IV would go beyond that and comprehensively demonstrate what can be deduced from the knowledge about climate change (Part I), its consequences for the ecosystems and human society (Part II) and the possible measures to be taken against it (Part III). But above all the IPCC has failed to point out in the conclusion of its publication marathon that the 4th World Climate Report is likely to have been overtaken on many points. And that the problem is even more serious than the 3,000 page main report indicates.

The allegedly new climate bible is not even up to date. It dates back to the middle of 2006. The IPCC authors and experts looked at and assessed all the scientific literature in the field of climate research that had been published by that date. That had been the deadline from the beginning. But 15 months have passed since then.

And more recent reports, which were not mentioned in the Synthesis Report, mean that the picture the IPCC paints may in fact be too rosy:

In this latter point at least the world climate body has given an update. It says the 59 centimeter increase should not be regarded as an upper limit because future rapid changes in ice flows have not been taken into account in the scenarios for rising ocean levels.

IPCC head Rajendra Pachauri recently said that even if the world community succeeds in reducing CO2 emissions from 2015 onwards, ocean levels will rise by between 0.40 to 1.40 meters over the long term, maybe not in the 21st century, but a bit later. That shouldn't calm climate fears though. The climate reacts extremely slowly and carbon emissions to date suffice to cause deep changes.

That too is an aspect the IPCC report only mentions briefly in its new global report: according to current studies a certain part of the anthropogenous greenhouse gases will remain in the earth's atmosphere for thousands of years -- and impact the climate for half an eternity.