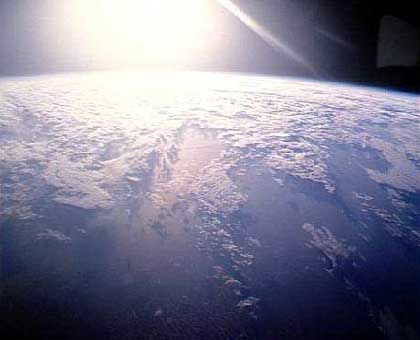 Parts of the world's seawater are losing their capacity as 'carbon sinks' sooner than expected.

We may pump tons of carbon dioxide into the atmosphere everyday, but at least we can rely on our trusty "carbon sinks" -- oceans and forests -- to absorb some of the problem, right? Not as much as we thought, according to new research. Some of the world's seawater, thought to absorb a quarter of all carbon dioxide (CO2) emissions, has grown saturated with the gas and leaves more of it sitting in the atmosphere.

Researchers reporting in the journal Science say at least one large ocean area -- the Southern Ocean around Antarctica -- is so loaded with CO2 that it's losing its ability to soak it up. The Southern Ocean alone accounts for 15 percent of the global carbon sink.

Only half of all CO2 emitted in the world stays in the atmosphere. The rest goes into carbon sinks, normally vast collections of water or plant life which can bind or process the CO2 and keep it out of the global-warming equation. Carbon sinks are the idea behind so-called "carbon offsets," like trees planted to reduce a carbon footprint.

The decline of Antarctica's Southern Ocean as a carbon sink may raise future CO2 levels and speed up global warming. Climate scientists have predicted this would happen. The trouble is that the changes appear to be happening some 40 years ahead of schedule.

"We thought we would be able to detect these only in the second half of this century, say 2050 or so," lead researcher Corrine Le Quere told Reuters. Data from 1981 to 2004, however, show the waters have been saturated with carbon dioxide since at least the 1980s. "So, I find this really quite alarming," she said.

Why is it happening now? Wind, says Le Quere. Increased winds over the past half-century churn the Southern Ocean, pulling naturally occurring carbon from deep in the ocean to its surface, where the human-caused carbon sits. The ocean surface becomes saturated with CO2 and stops absorbing it from the atmosphere.

"Since the beginning of the industrial revolution the world's oceans have absorbed about a quarter of the 500 gigatons (500 billion tons) of carbon emitted into the atmosphere by humans," Chris Rapley of the British Antarctic Survey said. "The possibility that in a warmer world, the Southern Ocean -- the strongest ocean sink -- is weakening is a cause for concern."