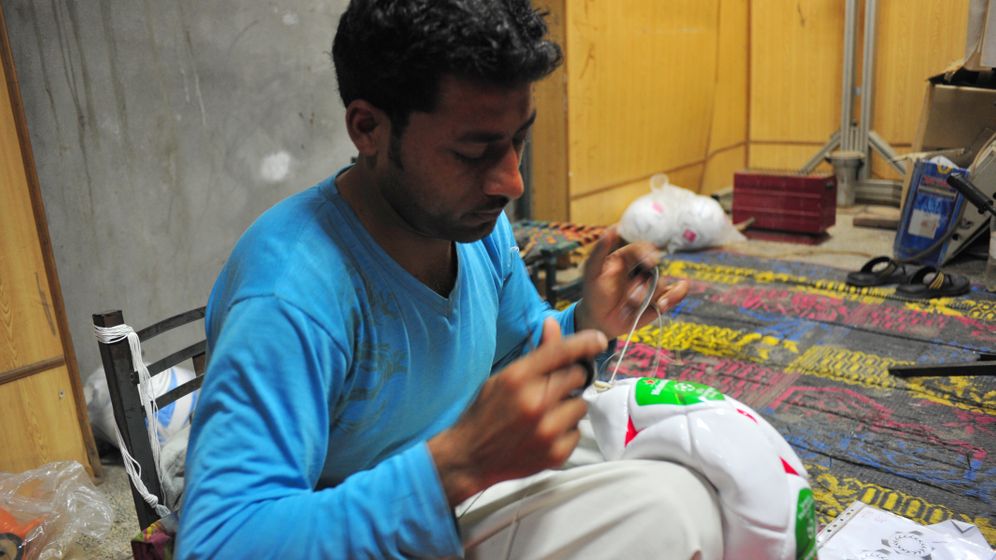 The village is surrounded by lush green fields. A few red chimneys from brick factories, their tips blackened with soot, jut into the sky. Flat, crumbling buildings are dotted around with windows like arrow slots. They appear to be barns or grain stores.

In one of these houses in Sambrial, a few kilometers outside Sialkot on Pakistan's border with India, Shaukat is sitting on a short-legged chair next to 20 other men. He has taken off his sandals and put them next to his chair. In March, it's warm enough to work barefoot. Shaukat is a strong, 20-year-old man. He has been working for this independent stitching factory, Danayal, for eight years. Danayal produces handmade footballs for professional leagues.

At one end of the room there's an old television set showing a football match, but the men aren't paying any attention to it. They're sewing and talking to each other. They find cricket far more interesting. Most of them have never played football. But Shaukat is glad that millions of people around the world like football -- maybe not in Pakistan and not really in the entire region of South Asia, but in the rest of the world. That global love of the beautiful game has given him an income for years.

At the entrance to the factory there's a notice board showing the current rates of pay. Depending on the model, his employer pays between 55 and 63 Pakistan rupees per ball ($0.65 to $0.75, €0.48 to €0.55). "On a good day I manage six balls," says Shaukat. That's eight hours work. "That's not a lot of money," he says as he pushes a needle through the thick synthetic leather and stitches together two patches. His boss is standing close by so he quickly adds: "But it's not little either." He gets paid every Saturday and has to feed a family of six with his wages.

On average the people of Sialkot earn €1,000 euros ($1,370) a year, twice the national average, thanks to the sports goods industry. Manufacturers of surgical instruments, leather goods and musical instruments also contribute to the city's prosperity. All balls and surgical knives manufactured here are exported. Politicians and executives scrutinized foreign markets and adopted the standards of their Western partners. Some 500,000 people live here -- 3 million if you include the commuter belt -- and most of them are proud of themselves and their city. The streets are better and the cars newer than in other regions of Pakistan. Sialkot has profited from globalization.

There's a hill of white footballs piled up in the room next door. The material -- per ball, 20 hexagonal patches and 12 pentagons of synthetical leather plus the bladder and thread -- is supplied by the company Forward Sports. Every evening a truck comes to collect the finished balls. At present, Forward Sports is the biggest manufacturer of handmade footballs in Sialkot. It outsources to more than 100 stitching centers like Danayal. It sells the balls to German sports company Adidas for between €5 and €10 per ball, no one here wants to state the exact price. Adidas has supply contracts with other companies in Sialkot in addition to Forward Sports.

It's a long route from the stitching rooms of Sialkot to the professional football pitches of Europe and America. First you get the sub-subcontractors -- the stitching centers, the backroom workshops, the one-man businesses. Add to that the subcontractors, the transport firms, the customs offices, the sports equipment giants, the advertising industry, the sports good retailers and the department stores. The chain converts a 63-rupee ball into a product costing more than €100. Everyone wants a cut. And someone has to come up with the millions of euros for the football stars, the expensive advertising icons of the sports brands.

Up to 60 Million Footballs a Year

Demand for footballs is enormous, especially in years when there's a World Cup. Since the mid-1980s, Sialkot has had its own customs office, which means the manufacturers don't have to transport their goods to the port of Karachi. They call the freight center their "dry port." Last year the city opened a modern airport to allow the gentlemen from Adidas, Nike, Puma and Co to fly straight to Sialkot and to receive particularly urgently needed supplies per air freight.

Recently, however, hardly any Western executives have dared to travel to Pakistan, even though there haven't been any terrorist attacks in Sialkot. The sports giants are so afraid of terrorism that they haven't even built up a distribution network in the country, even though most of their products are manufactured here. Pakistani business people have trouble getting visas for the United States or for Europe. But business is still going well, they say.

The factories of Sialkot supply 40 million footballs a year, and that number rises to 60 million in European Championship or World Cup years. That's an estimated 70 percent of the global production of hand-sewed footballs. According to legend, the success story of Sialkot as world capital of football production started with a man who repaired a leather ball for British colonial military officers about a century ago, and then began making his own balls. He was called Syed Sahib, and the city has named a street after him.

The Pakistani suppliers have had a good reputation among global sports firms ever since child labor was officially banned here. Children as young as 10 years old used to stitch footballs until there was an international outcry about it. The sports companies, accustomed to nurturing their image with huge sums of money, got worried about their reputation. So they sided with human rights campaigners and exerted pressure. In 1997, Pakistani suppliers and representatives of Unicef and the International Labor Organization signed the Atlanta Agreement in which the industry agreed to stop the use of child labor.

Thousands of children lost their jobs overnight. To make it easier for the sports groups to control the ban, the big domestic manufacturers prohibited people from working at home and built stitching centers instead. Pakistan now has the Independent Monitoring Association for Child Labor (IMAC), which regularly visits factories and checks the workers' papers. In order to preclude bribery, a computer determines at random the time and location of factory inspections. It's odd that IMAC is financed by local manufacturers. But several small firms don't take part in the system. "It could well be that they are still employing children," says one IMAC controller.

"Child labor is a sensitive issue," says Aziz-ur Rehman, the head of Adidas in Pakistan. He says Adidas has developed its own monitoring system. In addition, its subcontractor Forward Sports sends people into the stitching factories to make sure there are no children there.

The case of Saga Sports is a cautionary tale of what can happen when a child is caught stitching footballs these days. Nike cancelled its contract with the company in 2006 because of it and Saga, once one of the city's biggest employers, is virtually bankrupt today. The managers of Forward Sports, Comet Sports, Capital Sports and the smaller manufacturers in the city paid close attention to the fate of their competitor.

Children Now Work in Brickworks Instead

Parents now send their children to the brickworks and into metalworking companies where no one is worried about corporate image. The families need the money to survive. The local sports companies are aware of what's happened but they want to fulfil the wishes of their Western customers. After all, the people who spend a lot of money on footballs want to do so with a clear conscience. The customer in a sports retail outlet doesn't realize that young girls are now hauling bricks right next door to Danayal, the stitching factory.

"Ten or 12-year-olds were well off here," says one manager who asked not to be named. "They learned a trade here that secured them an income for life. Now we're having trouble finding new stitchers."

Muhammad Ishaq Butt is convinced that Sialkot will cope with the labor shortage. He's sitting in his wood-panelled office in the city center wearing a blue blazer with gold buttons, a closely cropped grey beard and horn-rimmed spectacles. Butt, president of the Sialkot Chamber of Commerce, looks like a Hanseatic entrepreneur. "We're currently building a factory where balls will be glued by machine," he says. It's a joint venture project between the city and private investors. In Thailand and China balls have for a long time been exclusively produced by machine -- to such a high standard that the 2006 World Cup in Germany for the first time didn't use a football made in Pakistan, but in Thailand. The Adidas model "Jabulani" for the 2010 World Cup in South Africa is manufactured in China.

A lot is going to change for the stitchers of Sialkot in future. "That's how society works," says Butt. "The people will learn to operate machines." However, demand for hand-stitched balls remains very high and the quality is still better than balls glued or stitched by machines, he adds.

In the big companies of Sialkot, men in white coats are working to make the handmade balls even better. They're using computers to measure whether the product is perfectly round. Machines check how much water a ball absorbs in the rain, how resilient the material is and whether the surface is too slippery. The work is paying off, the researchers say. A ball made in Sialkot will be used in the Champions League final in Madrid on May 22.

So no one in Sialkot should be worried, says Butt.

Besides, firms here have learned how to offset market share lost to the competition in the Far East, he adds. "We're increasingly making other products here." Sports clothing and bags, for example. And he proudly declares that his city has made it to the top in other industry: The city now produces more gloves than any other region in the world. 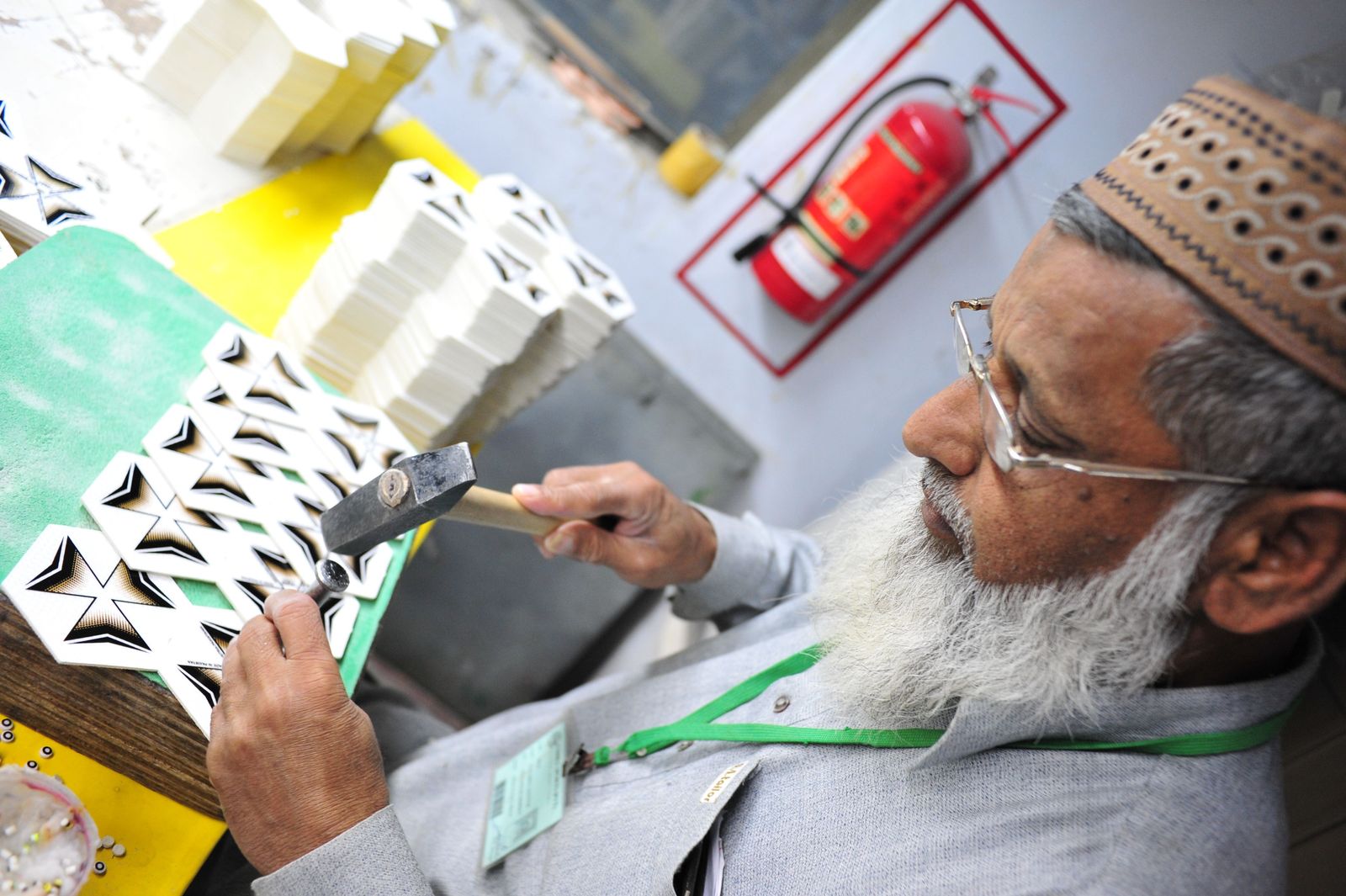 Abdul Qayyum pierces one of the leather shapes to make a hole for the valve.