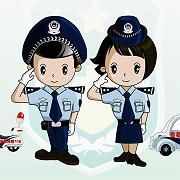 "Virtual police" cartoons remind Web users in China that the government can see what they're doing.

Conventional wisdom has it that the Internet can withstand anything. Attempts to censor it are about as futile as trying to nail Jell-O to a wall. Experts have claimed that if blocked, the flow of information will simply reroute to reach its target. Too bad China isnt listening to the experts.

"Golden Shield" is the term Chinese officials use for what may be the most sophisticated censorship system in the world. Critics like to refer to it as the Great Firewall of China (GFC). Whichever term you choose, its clear that over the past two weeks this virtual wall has withstood its first major trial by fire.

The Chinese crackdowns in Tibet have sparked bitter protests around the world, both online and off, since March. The Olympic torch relay has provided a particular focus for pro-Tibet activists wrath -- but in the Peoples Republic, cyberspace has become a wholly pro-China zone.

Egged on by state media, Chinas Internet users came up with ever-more creative ways to express their outrage towards the pro-Tibet protesters. Almost overnight, millions of Windows Live Messenger chat-service users added symbols depicting a red heart beside the word China to their contact names. One blogger writing on popular Internet portal sina.com crowed that the Western media has accomplished something positive: theyve brought us Chinese together.

Outrage against the protesters culminated in calls from individual bloggers on portals such as people.com.cn to boycott -- for instance -- Germany. (Boycott Volkswagen, boycott German goods, boycott the German chain Metro.) Here's where things suddenly changed, though, dictated from above: Apparently the establishment wasnt all that pleased with such calls to arms, and so, suddenly, they were gone.

The virtual Peoples Republic abides by other laws than the rest of the Internet. But how do the communist sentinels of cyberspace manage to control the information flow so precisely?

Surveillance computers form the backbone of the Chinese security system, monitoring the bulk of online communication round the clock. The machines are supported by an army of government censors, whose numbers are estimated at over 30,000. This Herculean effort is on the increase as Internet users multiply at a record rate. As of February, China officially has the most Internet users in the world (221 million to Americas 220.6 million). And what happens in China can easily change the Internet as a whole. Experts believe that the country has already exported its innovative censorship methods to countries such as Iran and Vietnam.

Dozens of media researchers are now studying the architecture of the Great Wall 2.0 with a mixture of horror and fascination. What theyre discovering is how surprisingly dynamic, subtle and state-of-the-art the censors of the 21st century are.

Researchers have noticed that the Internets decentralized structure is far from enough to protect it from government control. American cyber-libertarian John Perry Barlow and his supporters may once have claimed that governments of the industrial world have no sovereignty in cyberspace -- but Jonathan Zittrain says thats not the case. The University of Oxford scholar has warned about the emergence of an increasingly balkanized Internet. Instead of a world wide web, as the data from our study of Internet filtering makes plain, its more accurate to say we have a Saudi Wide Web, an Uzbek Wide Web, a Pakistani Wide Web, a Thai Wide Web, and so forth. 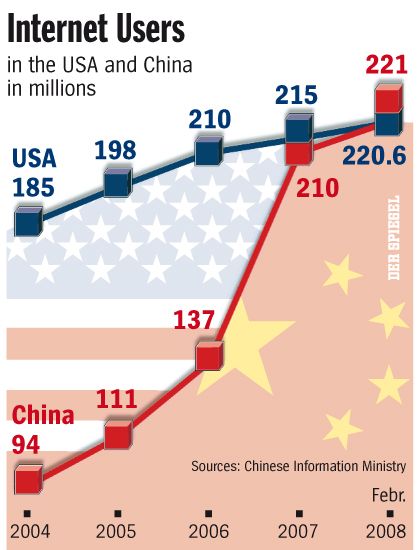 China leads the world in Web users, too.

Zittrains recent research report, called Access Denied and co-authored with colleagues from elite universities including Harvard, Stanford and Cambridge, functions as an atlas of Internet censorship. The authors conclude that the Chinese inspectors methods are at the vanguard of the field -- distinguished not by their use of rigid controls but by their flexibility and creativity.

The United Arab Emirates can be taken as a counterexample. The desert nation has relatively clear laws and blocks access to objectionable material such as sexually explicit content in a fairly consistent and predictable way. Strict filters are employed to ban access to all Israeli Web sites, for instance, whose domain name ends with .il.

This strict style of border control runs counter to Chinas approach. The GFC is decentralized, flexible, unobtrusive and focuses first and foremost on key words, explains Daniel Zinn, a graduate student in the Department of Computer Science at the University of California, Davis. What this means is that rather than censoring entire domains, only individual pages containing pre-defined words are blocked. Often these words have to do with three topics of special sensitivity in China -- Tibet, Taiwan and Tiananmen -- but there are a host of others, such as Falun Gong, Mein Kampf, and democracy.

An attempt to call up a suspect Web page usually results in an error message, so most users try to keep their lives simple by avoiding risky search terms. That way they can surf in peace.

This cat-and-mouse game pitting bloggers against censors is part of the fun for more rebellious users, who like to think up new terms for politically charged topics and elude the censors. So, for instance, in order to find information on the Tiananmen Square Massacre of June 1989, one would enter in the date as a code, i.e. 198 964 (though even this code is now blocked). Sometimes, in response to questionable search terms, small, bug-eyed cartoon characters in police uniforms pop up on the screen -- a reminder that Big Brother is always surfing alongside you.

The GFCs strength lies in its unpredictability. Although thousands of censors may be hard at work, they face millions of bloggers. It would be impossible to monitor each of their entries. How much more effective, then, to use subtle signals to menace Internet users into censoring themselves.

Another recipe for success is delegating censorship. Internet service providers, content providers and Internet cafe managers have taken over the task of monitoring objectionable Web pages. Government monitors send updates to the companies several times a day, often by cell phone text message. To avoid conflict, its easiest for the providers to err on the side of caution and censor more, rather than less.

Those who dont will face draconian punishment -- which not even US companies like Google can escape. The Google search engine was inaccessible from China, until, reluctantly, they created a censored version for Chinese users. (This despite Googles corporate motto: Dont be evil.)

A side effect of this blockage was that the Chinese search engine Baidu gathered more customers. Even this might be an innovation for the government -- which may have noticed that censorship can also work as protectionism, supporting local over foreign firms.

And Google isnt alone: Other US-based global tech firms like Cisco and Microsoft are quietly working with China's censors as well. The 2004 controversy over Yahoo's role in the arrest of Chinese journalist Shi Tao illustrates how fine the line dividing commerce and collaboration can be. In that case, Yahoo passed on the journalists personal details to the Chinese government. Shi, a critic of the government, was sentenced to 10 years imprisonment.

Shis case was not isolated. The press-freedom organization Reporters without Borders has published numbers exposing the tenuous position of dissident Chinese Internet users. Some 48 of the 63 cyber-dissidents imprisoned around the world are held in China.

The American House of Representatives called a hearing after the Yahoo incident. These companies tell us theyre going to change China," one congressman complained, "but instead, China changes them.

The upcoming Olympic Games provide ample reason for the censors to refine their techniques. With an eye to the host of foreign journalists expected this August, the government has created a kind of parallel version of the Internet, restoring access to most of the BBC Web site and Wikipedia. What visiting journalists might not realize, however, is that the Chinese versions of these long-blocked sites are still off-limits.

Meanwhile, regulations continue to tighten. One recent change is the ruling that every Web site which allows private video sharing is subject to official licensing. Moreover, the state has to have a majority stake in the Web sites provider. Why? Simple: Video files are far harder to filter than text files.

Of course, as Beijing-based new media specialist Andrew Lih points out, the Great Wall 2.0 isnt impossible to breach -- in fact no one even claims it is. He comments that anyone who knows what hes doing has plenty of ways to get around the Great Firewall.

The countless tricks available to circumvent the censors and the spies are a perennial topic of discussion in Chinese chat rooms. One of the best-loved tools is Gladder (from Great Ladder), a browser extension that helps users scale the virtual wall. The name might make outsiders smile, with its whiff of nighttime boarding school larks. But a Chinese blogger from Changsha advises cautions when it comes to such Internet escapades. Otherwise, he warns, tomorrow the security service will knock on your door -- a real possibility thats not a laughing matter at all.