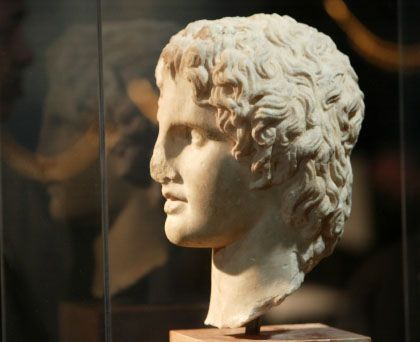 Was Alexander the Great Greek or Macedonian? It's important.

It would be difficult to come up with a foreign policy issue that agitates the Greeks as much as the name of their neighbor to the north. Macedonia is all over the editorial pages, makes frequent appearances in TV talk shows, fuels myriad coffeehouse debates -- and is also responsible for large-scale demonstrations, government crises and diplomatic discord.

Now, the Name Game has thrown a wrench in the NATO expansion works. Greece, a member of the alliance, says that it will only agree to accept Macedonia if it changes its name. The controversy will not only overshadow the NATO summit in Bucharest, Romania next week. It could seriously jeopardize the planned expansion of the alliance and plunge Macedonia into a domestic political crisis.

The issue, insist some Greeks, has its roots in antiquity. From their standpoint, the central question is this: Who are the rightful descendants of Alexander the Great -- and who are the heirs of Aristotle? The seemingly absurd controversy is not a new one. Indeed, it evolved into a bitter feud in 1991, when the former Yugoslav republic declared its independence from Belgrade and took the name Republic of Macedonia. To Athens, the name is an affront and the Greek government has chosen to interpret the name as an indication that Macedonia, the country, harbors territorial claims in the northern Greek region also known as Macedonia.

Nationalist forces in the Macedonian capital Skopje, like the Internal Macedonian Revolutionary Organization (IMRO), have stoked such fears by reviving the dream, pursued by former Yugoslav dictator Josip Tito and former Russian dictator Joseph Stalin, of a Communist-controlled Greater Macedonia. On maps distributed by the Macedonian nationalists, all of northern Greece -- down to the Thessaly region on the Aegean Sea -- is incorporated into a future Greater Macedonia. Even Mount Olympus, the legendary home of the ancient Greek gods, is claimed by the nationalists.

The logic they use is the same as that applied by the Greeks -- Alexander the Great, they claim, was a Macedonian. Indeed, the airport in Skopje is named for the hero of antiquity, a christening that further enraged Athens in December 2006. The Macedonians also claim the philosopher Aristotle as a native son. Both have been posthumously slavicized. The proponents of a Greater Macedonia have chosen the northern Greek port city of Thessaloniki -- or "Solun," as they call it -- for their future capital. Such expansionist dreams are especially explosive from the Greek perspective, given the Macedonian-speaking, Slavic minority of several thousand people living in northern Greece.

The conflict came to a head between 1992 and 1995. Chanting "Macedonia is here!" as their rallying cry, hundreds of thousands of Greeks took to the streets in Thessaloniki. Some Greek politicians, including Socialist opposition parliamentarian at the time Stelios Papathemelis, even expressed a willingness to go to war with the Republic of Macedonia to force it to change its name.

The controversy eventually led to the ouster of conservative Prime Minister Kostaas Mitsotakis, who had favored a compromise with the neighboring country. Andreas Papandreou, a Socialist who succeeded Mitsotakis, tried to force Macedonia to its knees with an economic boycott, but in doing so he isolated his own country within the European Union.

The embargo also affected thousands of Greek business owners who had invested across the border in Macedonia in the preceding years and whose business interests there were thriving -- name dispute or not. The Greeks lifted the trade embargo in 1995, and the two countries signed a UN-brokered interim treaty. Under the agreement, Macedonia would use the name "Former Yugoslav Republic of Macedonia" (FYROM) in international organizations.

In response to Greek demands, Macedonia also amended its constitution -- expressly denying any territorial ambitions in northern Greece -- and changed its national flag to set aside Greek fears of a Greater Macedonia. In return, Athens agreed not to oppose the neighboring country's accession to international organizations under the name "FYROM."

But that agreement, partly as a result of the Skopje airport's new name, now seems to have been forgotten in the Greek capital. Before they can join NATO, Greece wants its northern neighbors -- to whom Greeks usually refer, in reference to the capital Skopje, as "Skopjens" -- to choose a new name to be used in international relations and in passports. Greek Foreign Minister Dora Bakogiannis believes that the new name can include the word "Macedonia," but additional language should emphasize that it is a geographic designation.

Although more than 120 countries have now recognized the Republic of Macedonia under its current name, the Greeks believe that they have more pull because they can use their veto to prevent Macedonia's acceptance into NATO. Prime Minister Kostas Karamanlis and Foreign Minister Bakogiannis, a daughter of former Prime Minister Mitsotakis, who was toppled in 1993 over the Macedonia controversy, seem determined to follow through with this plan, even at the cost of isolating their country abroad.

On Tuesday, Nimetz gave the negotiators from Athens and Skopje, who had traveled to New York, what is likely to be his last proposal for the time being. While the proposal has not been made public, numerous reports have said the offer on the table is "Republic of Macedonia (Skopje)." Nimetz called it a "fair compromise," but the Greeks are unhappy with it, with Foreign Minister Bakogiannis's spokesman saying it was "far from an acceptable solution." The Macedonian parliament will discuss the name proposal on Monday.

But chances are considered slim, especially now that there are considerable differences of opinion in Skopje over the name dispute. President Branko Crvenkovski is calling for a compromise to avoid jeopardizing NATO membership, which many Macedonians see as a sort of guaranty of the existence of their country. But Prime Minister Nikola Gruevski says he refuses "to be blackmailed" and wants to take a hard line with the Greeks. The Macedonian government is already on shaky ground, now that the Albanian Democratic Party withdrew from the governing coalition in mid-March over its demands that Skopje recognize Kosovo and introduce Albanian as its second official language.

Albanians constitute about one-fourth of the population, making them the largest ethnic minority in Macedonia. The government crisis will likely re-erupt after the NATO summit, especially if admission to the alliance fails because of a Greek veto.