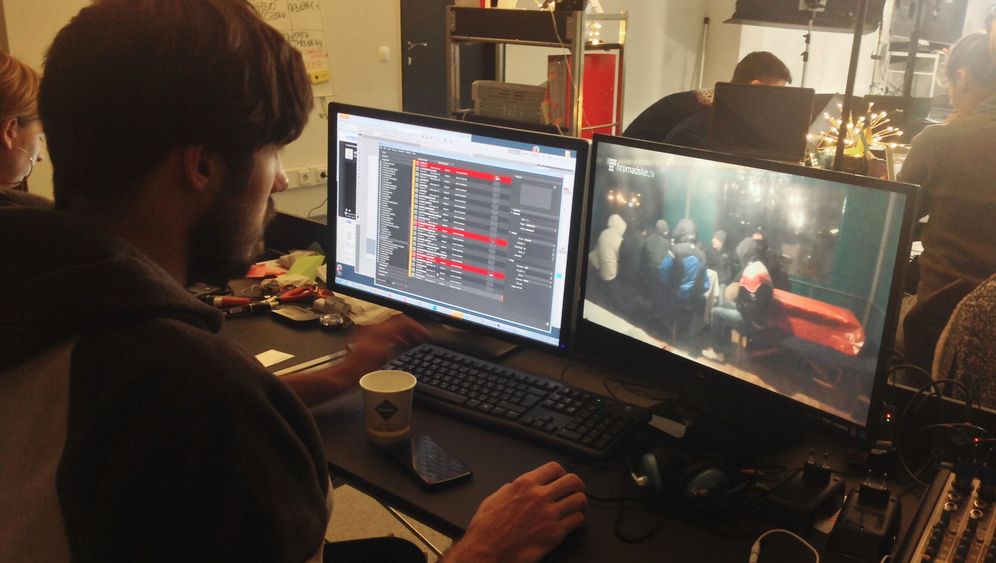 The office of the online TV channel Hromadske.TV ("open TV") is located on the fourth floor of an office building in an outer neighborhood of Kiev, Ukraine. At 100 square meters, with squeaky linoleum, a pitched roof and stale air, this is the unassuming headquarters of the main news organ of the protests against President Viktor Yanukovych.

When hundreds of thousands of people went into the streets on Sunday, over 1.5 million viewers watched the event on Hromadske.TV. The station was started by a group of journalists, most of whom used to work for the country's large TV stations, but left because of patronizing censorship by the government and the stations' owners, the powerful oligarchs. Hromadske.TV's strategy: What it lacks in money it makes up for in know-how.

The studio is a table in the corner, with a handful of monitors for the technicians next to it. They use them to cut to the large demonstrations on Independence Square, or to the chains of police officers around the parliament building. Journalists report live from the site of the protests -- the station has bought a few iPhones which, thanks to an app, they use to film events themselves and send recordings directly to the studio.

The station pays $2,000 (€1,470) in rent for the studio, which is located in the Vector business center. In one corner, Tatjana Danilenko, a 30-year-old news anchor from Channel 5, is speaking with guests about an attack on the president's office in which a bulldozer was used. The guests all agree the attack was caused by provocateurs the government paid to make the demonstrators look violent.

When the station went on the air for the first time, a few weeks ago, the plan was to do one show per week. About two dozen employees were involved in the launch, but now the station employs over 100 people, including many volunteers. Since the start of the protests, the station has been broadcasting 24 hours a day, seven days a week. The station has locations set up everywhere in the city to report the movements of protesters and police units.

Are people going into the streets because, contrary to Yanukovych's recent decisions, they want to be brought closer to the European Union? "It's a combination of reasons," says Lyudmila Yankina. "Anger at the police because they treat citizens like criminals, anger about bad streets and corruption, and, of course, the hope for Europe."

Yankina is no journalist. Her day job is as an adviser at a company in Kiev. Her boss gave her time off so she could coordinate the army of volunteers at the rebel station. "The people watch us because they trust us," she says. Every bit of news is checked. When unrest spread among the demonstrators because there were rumors tanks were being moved to Kiev with trains, the station's volunteers swarmed out. They went to train stations and train tracks around Kiev and gave the all-clear: No sign of tanks, Hromadske.TV reported.

Rebels from Others Stations

The only man in the room with a shirt and jacket introduces himself: Sergei Andrushko, the parliamentary correspondent. Like most of the people at Hromadske.TV, he comes from an established Ukrainian station with a large scope, big budget and little freedom.

He recently worked for TVi, a channel which was founded by a Russian oligarch, but was, for a long time, dedicated to independent journalism and criticizing the government. In April, the channel was taken over by a businessman close to the energy minister. Sergei Andrushko and 30 other reporters resigned shortly thereafter, in protest of attempts to influence the station's reporting. They now form the core of the Hromadske team.

TVi is an exception. The large TV stations in the country have long been the playthings of the government and opaque businesspeople. The most popular channel, Inter, belongs to the oligarch Dmytro Firtash and Yanukovych's chief of staff Serhiy Lyovochkin. Inter had previously been run by the head of the secret service. Channel 5 belongs to the billionaire and former finance minister Petro Poroshenko. "I know the heads of the channels are regularly brought in by the government," says Sergei Andrushko.

Hromadske.TV's problem is money. In order to be independent from the oligarchs, it doesn't carry any advertising. The station is financed by donations from inside and outside of the country. The US consulate and the Netherlands provided the start-up funds and viewers have donated €30,000. It's enough for the rent, the iPhones and a few cameras.

So far no journalist has received a wage. Most of them keep afloat with other jobs. Andrushko writes articles on the side for, among others, the web portal Ukrayinska Pravda.

He hopes the station enjoys success that goes beyond the anti-Yanukovych protests, and becomes the nucleus of a new kind of TV journalism in Ukraine. He wants to challenge the channels of the billionaires. "The viewers love us," Andrushko says. "We are starting it, the downfall of the oligarchs' TV monster."