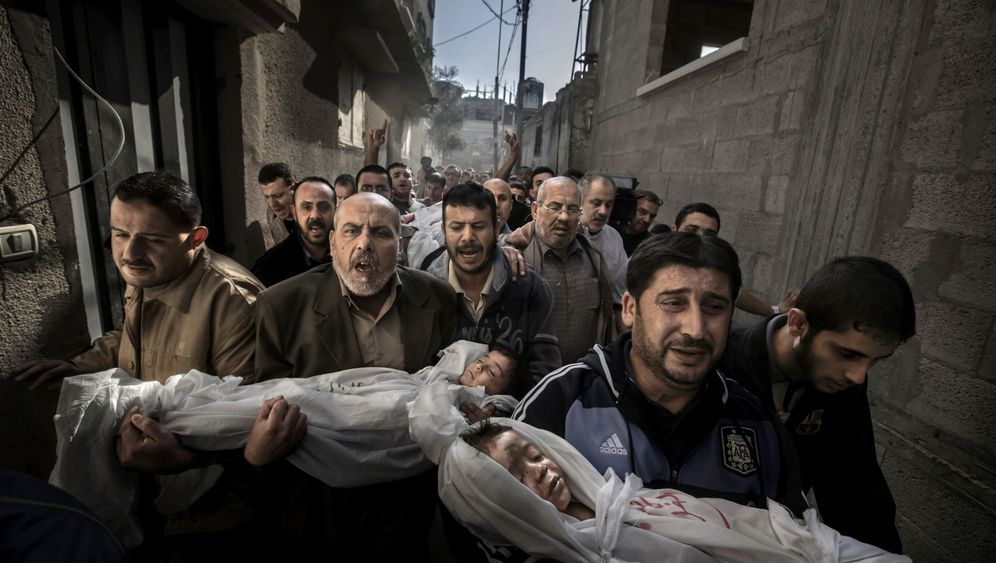 Photo Gallery: How Good Is Too Good for News Photographs?

The photo looks like a still from a movie. A funeral procession is passing through a narrow street in Gaza. There are gray walls on both sides, and between them, looking almost choreographed, are the mourners, a crowd of angry men stretching into the distance. They are carrying the bodies of two children, Suhaib and Mohammed, and, further back, the body of their father, Fuad Hijazi. They were killed when an Israeli bomb struck their apartment building.

A week ago Paul Hansen, who took the photo for the Swedish newspaper Dagens Nyheter, received the World Press Photo Award 2013 for the image. At the awards ceremony in Amsterdam, he talked about how the photo came about. He was fighting back tears as he described what it was like to visit the surviving family members once again, months after the funeral.

But one thing Hansen didn't want to talk about is how much the power of this image is the result of skillful editing. He had intended to bring along the RAW file, which is essentially the photo's digital original, for comparison purposes -- but he claims that he forgot to bring it. Hansen does not want to participate in the discussion, which he feels is unseemly, but that doesn't stop the discussion from taking place.

Pro-Israeli bloggers and journalists, in particular, had accused him of manipulation and embellishment. Other photographers have also been critical of the photo's selection for the World Press Award. Some fear that the boundaries are becoming blurred between journalistic photography, on the one hand, and artistic and commercial image design, on the other. Industry publications like Freelens Magazin have also voiced criticism of the trend.

Starting this Thursday, Hansen's photo and many other World Press Photo Award winners will be on display at the Gruner+Jahr publishing house headquarters in Hamburg. The exhibition will give the general public the chance to decide whether modern photography is indeed aestheticizing horror.

Hansen himself says that the magical light in that Gaza alley, which so effectively frames the mourners in his photo, was simply there, and that it was the kind of light that a photographer only captures once every few years -- and not something that was created after the fact on a computer.

Nowadays programs like Photoshop make it easier than ever to edit photos once they have been taken. In addition to making it possible to clearly manipulate a photo, they provide the tools to almost effortlessly remove, add or modify content. The computer perfects and expands the possibilities of what was once done in the darkroom to enhance the effectiveness of a photo during development and printing.

The procedure is called "post-processing," and Claudio Palmisano is a master at it. He works with two colleagues in a garage-sized space on a quiet street in Rome. His company is called 10b Photography, named after the street address of the studio. The old Kodak slogan, "You press the button. We do the rest" is on the door, but one word has been added: "better." It isn't just an advertising pitch, but can also be interpreted as a suggestion that what photos show has always been more than "reality." "It used to be a chemical process, and now it's a mathematical one," says Palmisano. Today people can use their computers to adjust contrast and saturation, elements that were once determined by the film and its development.

Photographers upload 50 to 100 images a day onto 10b's server. Palmisano begins by making automatic corrections to the photos on his computer, a process in which he hardly pays any attention to the image itself.

Then the detailed work begins. He darkens areas along the upper edge of one image to draw the viewer's eye toward the lower part. In a photo depicting a soldier in the foreground, he carefully and manually enhances the gun. In another photo, he makes the shocking and luminous red of a bleeding wound seem less glaring. The supposed original, he says, would simply not have corresponded to our expectations of what blood looks like.

What distinguishes Palmisano is not just the virtuosity with which he uses the software, but also perhaps the fact that he is aware of how sensitive his work is.

Francesco Zizola, a photographer who co-founded 10b with Palmisano six years ago, says: "The difference between photojournalism and photography is ethics. We are good at trying out possibilities without overstepping limits."

For 10b, there is a clear definition of what constitutes impermissible manipulation of a journalistic photo. It includes, for example, moving around pixels within a photo. But the choice of development techniques, as well as modifying contrast, saturation and density, are all allowed in principle.

"There are no 'correct' colors," says Palmisano. "It's all relative." In 2008, his partner Zizola won a World Press Photo prize with a photo of a Colombian refugee camp with a double rainbow overhead. The colors were so intensified through editing that the scene looks almost surreal. This is allowed, says Palmisano. What isn't permitted, he adds, is to change the relationship among the colors and to turn, for example, the green house in the photo into a red one.

News agencies, in particular, place significantly narrower limits on what is permissible, but they too do not completely prohibit post-processing. The Associated Press (AP), for example, essentially allows only the kinds of enhancements that were once commonplace in the darkroom, and that "restore the authentic nature of the photograph," as the agency states a little enigmatically.

"Changing the sky excessively can be problematic," says AP Vice President Santiago Lyon, who chaired the World Press jury this year. On the other hand, "there is no absolute rule in terms of enhancement," Lyon notes. "The jury is made up of industry leaders and their decisions can be right even if they don't exactly conform to AP's standards," he adds.

"You can compare the possibilities of using modern photo enhancement with the use of adjectives in a written article," says Lyon. "Some reporters exaggerate in their descriptions of events." Photos, on the other hand, still have the mystique of being objective documents, which can depict reality in genuine form and without any subjective interpretation. Paradoxically, this is only heightened through digitization.

Suddenly the unlimited possibilities for changing an image are offset by the faith in the existence of an unadulterated original. A digital photo can be stored as a raw file, one that makes do without all the interpretations, changes and compromises that are necessary when a camera stored an image in a standard small file format. The World Press Photo Award reserves the right to check this raw file if the jury suspects that a submitted photo was excessively post-processed. But it did not avail itself of this option in the case of the award-winning Gaza photo, or in that of another winner, American photographer Micah Albert, with his photo of a garbage collector in Kenya.

"The discussion on enhancement in photojournalism is overdue," says Albert. "As a communicator, I want to know the boundaries."

But a raw file could also be manipulated. Besides, is the image it depicts reality? Or does it have to be interpreted first, like an undeveloped roll of film? The answer is clear for the image processers at 10b. "It isn't a question of whether this information is post-processed," says Palmisano, "but merely of how and why."

'There Is Much More Competition Today'

The work done by the staff at 10b takes place in an astonishingly tense environment. On the one hand, it is seen as a taboo. There are photographers who are so embarrassed by their relationship with the company that they prefer not to discuss it. On the other hand, some of the world's most famous photographers place their images in the hands of the Rome experts.

James Nachtwey, for example, has been working with 10b for two years. Working with the legendary war photographer is especially time-consuming. Palmisano says that he can spend up to 12 hours on a Nachtwey photo. By the end of the process, he and Nachtwey may have exchanged up to 100 emails, addressing the most painstakingly detailed changes.

The award-winning Russian photographer Yuri Kozyrev, who has reported from war zones for important magazines for 25 years, used to send his film directly to clients, like Time. Now the images pass through the hands of the people at 10b, who know what he wants, so that he can exert more influence on the aesthetics of the printed picture. He is no longer willing to submit raw files to his clients. "The photos look totally flat in their original state," says Kozyrev. SPIEGEL, too, has printed photos that were processed by 10b.

Critics see an "Italian look" in the way 10b enhances images, something that is fashionable in the way bell-bottoms once were. On the other hand, the subsequent dramatization of photos is also a reaction to the growing flood of images, especially on the Internet. "There is much more competition among photos today," says Klaus Honnef, a professor of the theory of photography. "They have to outdo each other. This is also achieved with tools like image enhancement."

Palmisano gears his work to the particular style a photographer wants, but also to the preferences of the magazine in question. And if he is familiar with a jury, he says, he can optimize a picture to boost its chances of winning an award.

Of course, this isn't something jurors like to hear, which explains the somewhat fraught relationship between 10b and the World Press Photo Award. But ruling out photos because they seem too perfect isn't helpful either, which explains why part of 10b's repertoire is to "enhance" photos to reduce their quality from an objective standpoint. To do this, the company adds typical image errors and simulates graininess. All you have to do is reproduce the effect that a scratch on the lens would have created in a photo, and purist jurors will praise the photographer for not having gone too far with enhancement, Palmisano says with a chuckle.

Ironically, the magic of Photoshop makes it possible to edit photos to look as if they had not been edited with Photoshop. Palmisano believes that in the future photographers will increasingly emphasize authenticity by using post-processing to make their images look less perfect than if they had been taken with a digital camera. The worse a spectacular photo looks, the more genuine it feels.

When Paul Hansen took his picture in the Gaza Strip, another photographer was nearby. His photo must have been taken in almost the same location and at almost the same time, but it is an ordinary-looking news photo. It lacks the perfect cropping, the magical light and the debate over authenticity, but it also lacks the resonance and sympathy of Hansen's image.

Hansen says that he wants to achieve good things with his work. Perhaps an ordinary news photo wouldn't have been enough for that.